Notre Dame faces off against the Purdue Boilermakers on Saturday night in Indianapolis for ND's annual Shamrock Series game.  How does the Purdue special teams look?

Ian MacDougall, an senior transfer from Wabash College, is Purdue's main kickoff man this season.  MacDougall takes over for Thomas Meadows, who has shifted to the punting duties.  Last season for Wabash, MacDougall took 81 kickoffs, averaged 59.1 per kick, and had 34 touchbacks.  So far this season, he has 13 kickoffs (9 against WMU), is averaging 62.5 yards per kick, has 9 touchbacks, and 1 out of bounds. The longest return so far this season was 23 yards (also against WMU).  MacDougall is a very powerful kicker and returns may be hard to come by.  That said, I happened to catch some of Purdue's game against CMU last week and CMU was able to do this: 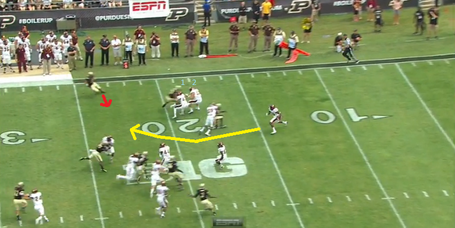 CMU was able to create a hole for their return man.  Unfortunately, they double teamed the first outside man (men marked 1 and 2) and the tackle was made by the Purdue kickoff man marked with a red arrow.  If ND gets a chance like this, I would like to see them make these blocks, seal a hole, send through a lead blocker, and use speed to get this out.

Thomas Meadows, last year's kickoff man, takes over the punting duties for Cody Webster this season.  Meadows has 9 punts for 339 yards, an average of 37.7 yards per punt, a long of 45, 3 fair catches, and 2 inside the 20.  Purdue has only allowed 1 return this season for -2 yards. 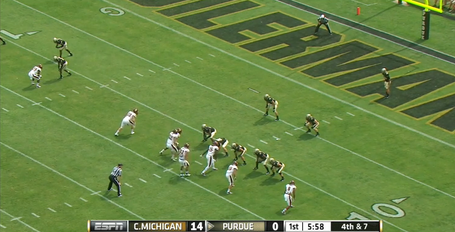 Purdue uses a hybrid form of the spread punt formation.  They have 3 gunners up top (Credit to scarponi) and only have two men back to prevent a block.  This is something Notre Dame could possibly take advantage of if they decide to go for a block, or at least show block, to force another man back.

Meadows is not Cody Webster.  Webster was arguably the best punter ND faced last season and was my vote for the Ray Guy Award.  He had an absolute cannon for a leg.  Meadows, on the other hand, has low and short punts.  Riggs needs to field these cleanly and focus on proper returns.  More importantly, since this is a spread formation team, the return team NEEDS to effectively block.  They need to not get beaten off the line and let Riggs get in a position to make a big return.  Michigan was a wasted opportunity of sorts and Purdue is much less talented.

What this tells me is that Purdue is not resorting to short field goals, since the shortest kick Griggs has this season, 35, means the ball was still outside the red zone.  Griggs has shown that he is certainly capable of making field goals this season and from long distance.  I think ND needs to focus on keeping Purdue outside of the 35, at least, to keep points off the board.  While 6 attempts is a very small sample size, it does appear that he has exorcised his demons from last season.

Mostert and Hunt are Purdue's primary RBs, so they are shifty and capable of decent speed.  Both had returns for touchdowns last season (100 vs. Penn State, and 99 yards vs. Indiana State, respectively), so they are capable of breaking one open.  Thankfully, Brindza has been lights out from the kickoff tee and I think he should continue to be against Purdue.  If not, then the coverage unit needs to maintain their lanes and play disciplined special teams football.

Against WMU, Williams had returns for 27 and 36, with a 21 yard return against CMU being called back for holding.  Last season, Williams only had 5 returns, but ran them for 84 yards, a long of 40, and an average of 16.8.  Make no mistakes about it, this is a very good punt returner.  The coverage unit is going to need to be very disciplined in dealing with him because they have not faced a punt returner of his caliber yet this season.

As always, any questions or comments, please feel free to share.