14 Storylines for the 2014 Football Season: The Return of Everett Golson

He has served his time and now returns to South Bend ready to deliver.

Share All sharing options for: 14 Storylines for the 2014 Football Season: The Return of Everett Golson

The eleventh of 14 storylines as we approach the 2014 football season...

There have been a lot of stories and coverage on Everett Golson this off-season. So much so that I sat down to write this piece and didn't have a clear idea on what to talk about. I decided to focus on the three areas that I think about the most when I ponder the future of Everett Golson.

I wanted to talk about the vague essence of Golson being a winner since he's only tasted defeat 4 times since the beginning of his junior year in high school. But, plenty of quarterbacks can say the same thing and the notion of being a "winner" is too difficult to pin down anyway.

Instead, it's a lot easier to understand that Golson, for whatever reason, has shown an innate ability to protect the ball and not throw too many interceptions. Going back to the start of his junior year at Myrtle Beach High School the enigmatic quarterback has thrown just 11 interceptions in 845 pass attempts.

Should we expect Golson to throw less than 10 interceptions this year? His past seems to suggest it is likely. The history of the game also suggests that if this happens Notre Dame should win a lot of games.

Step Up, No Literally

Recently our own Larz had to throw cold water on our EG Return party. That was a buzzkill for sure, but he does make a good point. It could be tough for Golson to come back and immediately hit the ground running as an improved quarterback from what we last saw at the end of 2012.

Golson has so much potential and there was a lot to like from two seasons ago. Still, he had his struggles. Making it through his progressions on a consistent basis was never easy. He wasn't mentally ready as a redshirt freshman to take on the whole playbook. The experience and savvy wasn't there to make appropriate checks at the line. While overflowing with 'arm talent' and generally very accurate his deep ball was spotty at best.

One of the big things I'm focusing on is Golson's pocket presence and ability to step up towards the line of scrimmage when the pressure is coming from his left and right. In 2012 Golson made a lot of plays with his legs by escaping the pocket but he also exposed himself to a lot of negative plays, and perhaps most importantly, missed some huge opportunities to throw the ball to open receivers because he didn't shuffle his feet forward and buy extra time to sling the rock.

Stepping up into the pocket on a consistent basis could be a momentous improvement for Golson. He'll avoid more sacks, keep his body and mechanics more square, get a head start on moving up-field in the event he takes off running, all while buying that extra second or two to find open receivers and go through his reads.

Handcuffs Off, Now What?

One of the other points Larz recently made was that in the grand scheme of wider college football Golson just wasn't that productive of a quarterback. Again, pretty true. An outside observer wouldn't see the big deal if they simply looked at Golson's stats.

However, I do think it's important to point out that Golson wasn't asked to do much in 2012. As head coach Brian Kelly recently pointed out at his opening fall camp press conference it was Golson riding the bus to the BCS National Championship Game and not driving it. 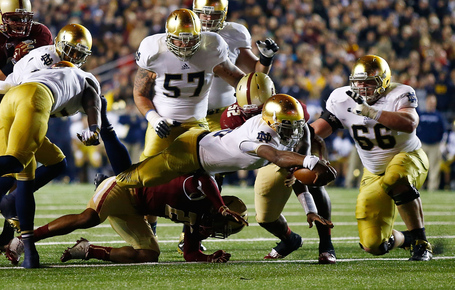 There are a couple ways to look at this. First, you can evoke the issues I presented above. Golson had his flaws in 2012 and wasn't ready to be the focal point of the offense. In the raw production world Golson is not in the conversation with the Mariotta's, Winston's, and Petty's of the game.

Yet, what makes Golson such an intriguing college football player was that he was able to show many flashes of brilliance while having the reigns controlled fairly tightly by Kelly and the coaching staff. That's not exactly an easy thing to do. Golson's stats aren't mind blowing but he's put together a pretty appealing highlight package in a small sample size.

We tend to be most critical of the quarterback position and for good reason but if Golson were a running back or wide receiver I think we'd be even more excited for his future. Golson's 2012 season was like a receiver catching 30 passes on 50 targets while exhibiting some impressive athleticism and speed. Sure, 30 receptions is nothing compared to the best in the country but for someone who wasn't seeing 150 targets it's quite impressive.

Everett Golson has made 11 starts* in his career at Notre Dame and thrown 30 or fewer passes in 7 of those contests. In comparison Tommy Rees threw 30 or fewer passes in 13 of his 30 games in which he played a full game. That's not an overwhelming difference but it is the difference between relying much more on your quarterback every other game instead of every 3 games.

Further, the only game in which Golson threw 40+ passes was against Pittsburgh and that was arguably his most dynamic performance as a college football player. Yes, the slow start and deficit played into the need to rely on Golson and simply having him throw the ball a lot isn't a magical recipe for success. Heck, Golson got pulled in that game and even threw his worst interception of the year in the end zone against Pitt!

But that game was an instance where Golson put the offense on his back and showed what he's capable of doing when things start to click. Who wasn't very impressed by that finish?

I don't know if things will click on a full-time basis for Golson this year. I won't make any predictions on how awesome he'll be except to say that I'll be disappointed if he's not a very, very good college quarterback. I'm just saying, he has the potential to slay opponents if things fall into place and he's able to play like he did against Pittsburgh--but in 5 or 6 games a season instead of one half.

I'm fine with tempering expectations if anyone thinks Golson will come out of the gates against Rice as a Heisman contender. It's just too hard to peek through the doorway that has Everett working in an offense where he's completely trusted to throw the ball 35 times a game and the handcuffs are fully removed. How good can he and the offense be then? What if he gives us a handful of games like Pitt 2012 but with less mistakes and even higher level of play?

Potential is a hell of a drug to come to grips with and I want to mainline Golson's talent like the worst of junkies. Maybe he'll never reach national superstardom but I'm excited as hell to watch him come back.

*I substituted the Michigan game with Miami here due to Golson playing all but the first series against the Hurricanes while being pulled early against the Wolverines.