The Moment You Have All Been Waiting For.

After an off-season hiatus, the special teams reviews and previews are back.  With the graduation of both TJ Jones and George Atkinson III, Notre Dame will be debuting several new return men.  I will discuss them as well as the key returning special teams cog, Kyle Brindza, before getting into Rice.

The one thing I will not address in this preview is the return yards given up by each team in the previous season.  Both ND and Rice will be debuting many new faces on special teams and I think it is impossible to predict how the coverage and return units will do with no game film to review just yet.  I think I can point out the pluses that the skill position players provide and that is what this will address.  Going forward, you will see me tearing apart critiquing both units and it will be a part of the OFD Film Room.  Until next week, enjoy a simple preview.

Kyle Brindza, arguably ND's best punter since Joey Hildbold, returns to punt for the Irish.  Last season, Brindza had 43 punts for 1,769 yards (41.1 yard average), a long of 56, 7 punts inside the 20, and an amazing 7 punts over 50 yards with only 3 touchbacks.  What is concerning for the Irish is 26 of Brindza's 43 punts were returned.  That said, Brindza's numbers speak for themselves.  40+ yards is a fantastic goal and Brindza certainly possesses the leg strength to reach an average comparable to Tom Hornsey (2013 Ray Guy Award Winner, 45+ yard average per punt).  This season, I am looking for Kyle to have more consistent drops, lower shoulders, and the same explosive leg that he showed us last season.  If he can manage that, he will most certainly be in the Ray Guy Award discussion at the end of the year.

As with punting, Kyle will likely handle the majority of the kickoffs and field goals this season.  Last year, Brindza went 20-26 for field goals and a perfect 38-38 on extra points.  Kyle was inconsistent from the field goal spot last season.  Out of the gate, he missed both attempts against temple and a scattered amount in the rest of the games in the season.  His misses last season came from 44, 37, 38, 44 (again), 46, and 55.  He went 5-6 in the bowl game, with his only miss from 44.  As i noted with inconsistency, Kyle missed 2 of 4 from 30-39, 3 of 7 from 40-49 but only 1 of 4 from over 50.  His longest field goal of 53 yards (against Arizona State) was record-tying.  He clearly has an extraordinary leg but he needs to relax on the intermediate kicks.  Kyle was a perfect 11 for 11 from 20-29, so he has it in him.  He has the leg to kick as long as 53.  He's certainly capable of being a Lou Groza Award winner and I think he should be in the discussion for it at the end of the season.

From the kickoff X, Kyle took all 75 of them last season, averaging 62.6 per kick with 35 touchbacks.  The opponent's average starting yard line was the 27 yard line.  40 returns, with inconsistent coverage, is scary.  I am hoping for two things: either Kyle gets more leg on the ball and just tries to boot it out of the back of the end zone, or the coverage team improves drastically.  I am hoping for the former.  Kickoffs are dangerous business, with speed and crushing hits common.  Touchback kickoffs would benefit both the field position and the physical health of the guys on the team, in my opinion.

Tyler Newsome will likely back up Brindza this season behind the snapper.  Newsome was a 3-star recruit out of high school and brings a powerful leg to campus.  I do not anticipate seeing him much this season in terms of punting (unless Brindza starts to suffer late-season leg fatigue from both punting and kicking duties or suffers an injury), but it is worth noting that he has a very powerful leg.  Ideally, if he can show something, I would hope he could handle kickoffs.  Doing so would help rest Brindza's leg from possible over-use.  The fear of having one guy handle every special teams duty is if he gets injured.  Giving Newsome some responsibilities would relax him on the field, get him used to gameplay, and keep him prepared if Brindza goes down.  Here is a camp video of Newsome in action.  I am a notorious hater of kicks in non-realistic situations (no pads, no helmet, no line, no rushing team, no holder, etc.) but at the very least, this shows you what his leg is capable of.

Notre Dame's 5th year transfer from the University of Florida, Cody Riggs, is going to handle punt returning duties this year.  This will be the first time he is going to handle the return duties, as he did not do so at Florida.  Riggs has played his way into a starting cornerback position on defense after having 30 unassisted tackles, 21 assisted, 6.5 tackles for a loss, 3.5 sacks, 1 fumble recovery, and 3 forced fumbles last season.  He is an athletic player and I am hoping for the return team to give him some chances at returns this season.  I repeat my mantra from last season: stalk block, stalk block, stalk block.

While George Atkinson III handled the bulk of the kick returning duties last season, Amir got his chances in the bowl game.  Amir managed 3 returns for 81 yards, an average of 27 yards per return, with a long of 35.  While GAIII possessed great straight-line speed, he appeared at times to be hesitant to simply lower his head and run for the gaps. GAIII looked to want to just run around everyone instead of through them.  Amir was the polar opposite.  His 3 returns showed that he's absolutely not afraid to take a hit and almost welcomes it.  I am looking for good things from him this season.

Notre Dame will not have an easy go of things off the bat with regards to opposing punters.  Farrimond is arguably one of the best punters Notre Dame will face this season.  James took a majority of Rice's punts last season (71, compared to 11 for the rest of the 3 punters) and booted them for 2,989 yards, an average of 42.1 yards, a long of 66, 15 inside the 20, 8 touchbacks, and 17 fair catches, with no punts blocked..  What is not surprising to me is the fact that the Rice punt unit allowed so many returns (31 for 287 yards, 1 TD).  With a leg as powerful as Farrimond's, it is almost inevitable that he would outkick his coverage, and it looks like he did so routinely last season.  Whether or not Rice can improve on this is yet to be seen.

As for the formation: 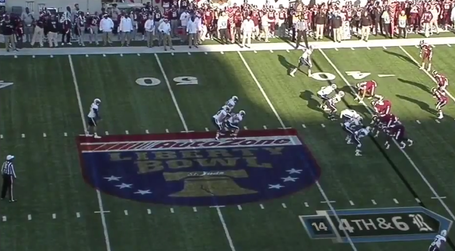 Against Mississippi State in the Liberty Bowl, Rice utilized the spread formation with double gunners.  If you want to think of me during the game, just imagine me screaming "STALK BLOCK" at my television as you watch every Rice punt on Saturday. Notre Dame is only going to have success against a spread formation if they can concentrate on individual blocks and create space for Riggs.  Farrimond looks like he could outkick his coverage and Riggs should have some chances at returns on Saturday.

The kicking position is going to be Rice's wild card.  Graduated Senior Chris Boswell took all 21 field goal attempts last season as well as all 79 kickoffs, leaving Rice with brand new players at the kicker position with zero experience.  Redshirt Freshman Taylor Knopf appears to have won the kicking competition, as he is listed at the top of the depth charts I was able to find.  In Rice's spring game, Knopf kicked 2 of the 4 extra points.  Redshirt freshman Anthony Price took one, and True Freshman Parker Hanusa took the fourth.  Because of the uncertainty, I think one of Price or Knopf will handle the bulk of the field goal duties (Hanusa was injured and is being held out this season.  He is also listed as a DL, so I am not sure if this is simply a typo in the Rice Blue Gray Game Box Score).  It is possible, if one of the two shows inconsistency, that we will see the other.  At this point, my best guess is it will be Knopf.

Kickoffs should be a lot easier to predict, as Rice benefited from a transfer this year.  Kickoffs are going to be handled by James Hairston.  For those of you familiar with SEC football, Hairston is a senior transfer from LSU.  Last season for the Tigers, Hairston had 86 kickoffs for 5,436 yards and a whopping 45 touchbacks.  Hairston took no field goal attempts, however he did boot 4 extra points.  For as inexperienced Rice may be from the field goal spot, they are unbelievably experienced at kickoff.  I would be surprised if Notre Dame had many return chances on Saturday on kickoffs.  Hairston has a fantastic leg and has shown a consistent ability to get the ball deep in the end zone.

Rice returns its main punt returner last season in Bryce Callahan.  Last season, Callahan had 18 returns for 114 yards, an average of 6.3 yards per return, with a long of 23 (vs. UTEP).  Callahan is a capable return man but is not a top-tier return man (I will stand by my offline preseason prediction that the best ND will face this season will be Ryan Switzer from UNC).  Notre Dame, with smart punting and disciplined coverage, should be able to contain him.

Rice also returns its main kick returner in Malcolm Hill.  Hill took the most kick returns last season (11) for 237 yards, an average of 21.5, and a long of 33 (vs. UAB).  Like with Callahan, and with only a long of 33 and no TDs, Hill is a serviceable return man that Notre Dame should not have any issues containing.

Saturday's game will mark the first game Notre Dame will play at home on a turf field.  ND's special teams units have had success on turf fields in prior seasons and it will be interesting to see how the team performs on the field at home on Saturday.

Notre Dame has only had Under Armour gear for several months, meaning the kickers have only had several months to break in their cleats.  They are also different fits and styles, so it will be interesting to see how the kickers perform in them.  If you know me, you know that I love UA gear and so I am happy the players will, at least, look better on Saturday.

I welcome all questions and comments below.