It's game week. Three words that we've longed to hear for months on end. Three words that signal the end of yet another roller-coaster offseason that saw its fair share of the dreaded Breaking News Banner. Three words that introduce a nearly 5-month stretch where doctors everywhere raise their eyebrows at the sudden spike in requests for blood pressure pills from Notre Dame fans. And most importantly, three words that mean our humble little Trick Shot Wednesday column can finally--finally--end its own offseason and start using actual NDFB photos instead of scraping the bottom of the barrel for highlights from the Westminster Dog Show or whatever.

Yes, folks, football is finally back. The last time we saw our beloved Fighting Irish in action against someone besides themselves was exactly eight months ago, when good ol' Tommy Rees capped off his farewell tour by leading the then-Adidas-sponsored Irish to a 28-13 victory over Rutgers in the Pinstripe Bowl. I probably don't need to tell you that a lot has changed since then; however, despite our collective suffering, panic, and commiseration (partially caused by the cathartic and well-written--if not exactly cheery--series of ND's worst losses), we've come out the other side in one piece and are ready to stand shoulder to shoulder in support of our helmeted heroes!

At this point, I was originally intending to compile the winners of each TSW from this past offseason. However, I decided against it because A) I'm not that hard-working, B) it would probably re-ignite the whole "Oregonian Shakespeare" controversy somehow, C) it was the goshdarn offseason, and D) I am lazy. However, I would like to thank those of you who were loyal and/or bored enough to stick with us throughout the lazy days of summer and still found the time and energy to chime in with your wit and Photoshopping skills. All kidding aside, thanks for making it all worthwhile--without the Commentariat, we'd just be a silly group of talking heads and very polite bear-tamers.

To be clear, this week is the last TSW of the offseason--our own regular season won't begin until next week, when we (hopefully) get some fine photos of our gritty blue-collar gym rat running backs running roughshod over Rice to the tune of 340 rushing yards and four touchdowns. In the meantime, we'll end this offseason on an extra-silly note as we leave you with the image of NFL referee Pete Morelli reacting to something during the recent Cardinals-Bengals preseason game. You guys know what to do, so give us your best captions and photoshops in the comments. IT'S GAME WEEK!!!!

--There were a bunch of you who made me (and apparently several others) chortle with your grand plans for inflatable entrances, so here they are in no particular order. Congrats to windyirish, ConcreteCharliee, occtipus, Jim Miesle, 8footpenguin, and TonyAlfordSwag for your awesome submissions! 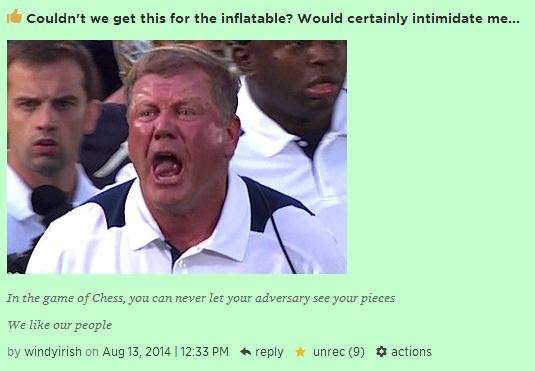 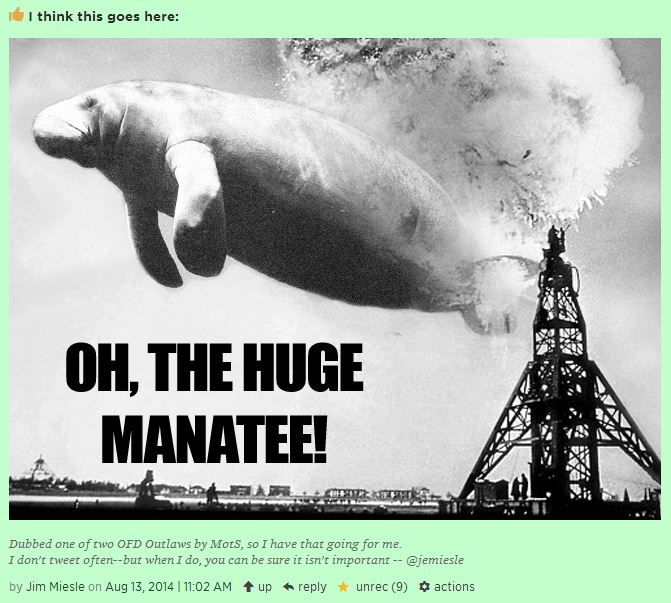 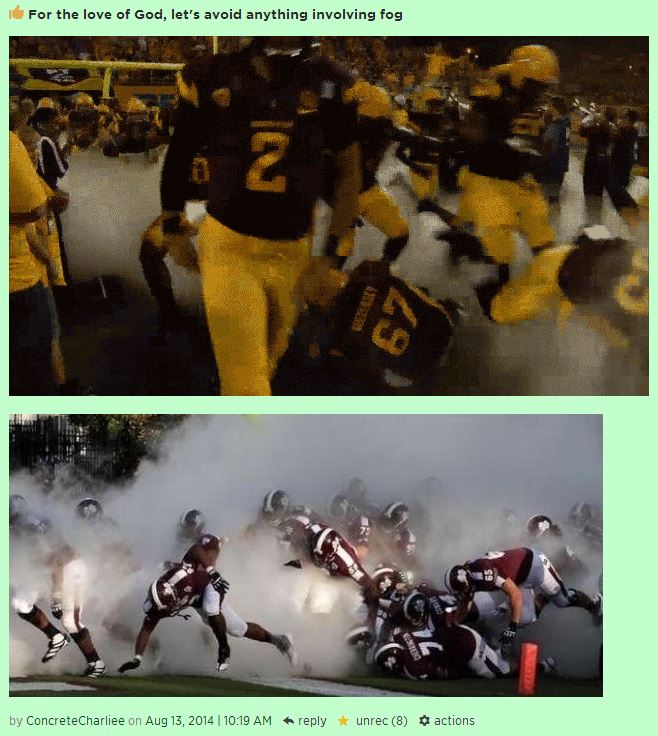 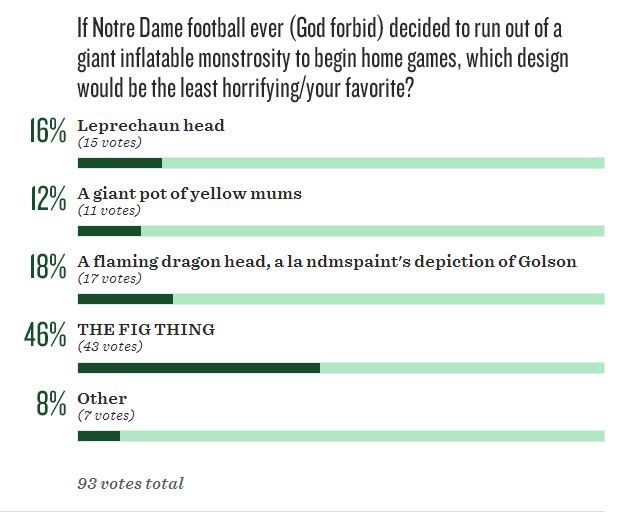 THE FIG THING LIVES ON