Coach Kelly made somewhat Weis-like opening statements in that he basically summarized the Rice media guide and fawned over the Owls and Rice Head Coach David Bailiff.  I'm somewhat nervous now.  Rice just went 10-4 and won CUSA, they're well coached in all phases of the game, and they have NFL talents at WR and DT.  I hate playing an underdog with a very good defensive tackle or nose guard.  That one guy can just make things so difficult on your offense.

In general, Coach Kelly is happy with leadership, small senior class and youth movement notwithstanding.  Kelly singled out Everett Golson as someone who's "taking the next step" in terms of leadership.  Golson has been very active in the Unity Council.  I have to imagine you kind of ease back into a leadership role after taking a year off for extracurricular reasons.

Captains haven't been named yet, but that should get done in the next 24 hours.

The players Unity Council elected to sing the Notre Dame Alma Mater Notre Dame Our Mother (I just said "our mother" four times in a row).  After every game, win or loss.

The Irish will be playing vast quantities of freshmen on defense.  So what's the strategy on easing them into the game?  Scoring a lot of points on offense.  By which I think Kelly meant that everyone should panic immediately about defense.  Do not eat.  Do not sleep. Do not work.  Forsake your families.  Wail, gnash your teeth in the darkness, pull out your hair, rend your garments.  And immediately invest all your energies into working yourself up into a state of total, frenzied panic.

On offense, the Irish will run more plays than they have in the past.  Kelly will be sensitive during the season to minimizing opponents' possessions where appropriate, but there is now a "different bar" for the speed of the offense and the number of plays we are going to run.  The up tempo offense or HUNH will be employed according to Kelly's feel for flow of the game.  And much to my delight (and as proof that Kelly reads my comments here on OFD), the Irish will use fewer (and, one hopes, more strategic, less telegraphing) substitutions on offense.  So the Daniel Smith B (for blocker) receiver position has been eliminated, I take it.

Schematically, Kelly discussed the tight end as central to his offense.  The tight end needs to wreak havoc in the middle of the field.  He thinks Koyack can fulfill that role, as he certainly gets downfield in a hurry.  After interning as a backside run blocker behind Messrs. Eifert and Niklas, Koyack is ready to show his bona fides as a receiver. 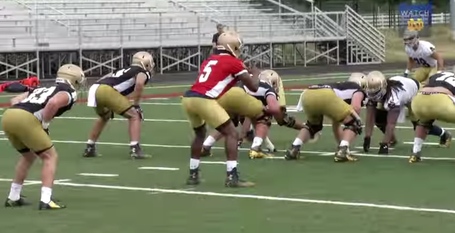 There was a question about Romeo Okwara retaking the starting position due to an apparent misprint in the media guide.  Kelly deadpanned that "Mike"-presumably Director of Football Media Relations Michael Bertsch-makes all those decisions, including the starting quarterback call.  That was Mike's call too.  Do not arouse the ire of the man with the mic, Bertsch.

In any event, Trumbetti and Okwara are 1a and 1b, according to Kelly.  Isaac Rochell is playing in a bigger body and learning to use his strengths, one of which is his strength.   Rochell, Blankenship, Trumbetti, and Okwara are all going to play at DE, so third downs will be an adventure.

Martini, Jhonny Williams, and Nyles Morgan will also need to play, as will CB Devin Butler, who Kelly seemed to be discussing as a RS Freshman for some reason.

Chris Brown has the speed.  He even has the physicality to beat press coverage, which was a little bit of a surprise to me, since he's blade thin. His issue is that he needs to finish plays.

Jarron Jones is another guy who has all the tools.  His piece de resistance will be work volume, of which he will need to produce somewhere between a whole heck of a lot and a metric ton (MST).

Matt Hegarty won the LG spot out right, but Hanratty will play.  McGlinchey is the first tackle in on either side.  Elmer has put in the work and has done well at transitioning to right tackle.

Jarrett Grace is getting a little better every day but will not be a go this weekend.  Sounds like he's been able to lift and run for a while, but I still wonder what kind of work volume he's going to be capable of even when he is full go.

Torii Hunter is ahead of schedule, but probably won't be ready until Purdue.  He's been running on something called a "zero gravity treadmill," which allows him to run at 20%-30% of his body weight.  I'm going to just go out on a limb and say science.  It is really something.  We used to have to launch a rocket into space for this sort of thing.  Anyway, Hunter is basically our sixth option at WR, behind Brown, Fuller, Robinson, Carlisle, and Prosise.  And Justin Brent is just keeping Hunter's seat warm, so I wonder if we see anything from JB this season.

Cory Robinson got a pin inserted into his hand, but is a go for Rice.

Kelly hasn't gotten any information on them, but they are out for Rice.  Kelly has been happy with his level of involvement or lack thereof in the process.  He doesn't feel like he's been kept out of the loop.  I think he realizes that it's in his best interest to keep his distance.  He's a football coach.  Let the University handle the academics and investigations into academic dishonesty.  They'll mete out punishments if any are necessary.  He'll just focus on football, and play the guys whenever the University tells him he can.  I think this is a healthy dynamic.  It's also smart on his part in that it lets him wash his hands of any funny business.  Not that he would bear any culpability for kids committing academic dishonesty, but it's another layer of healthy distance.

PunterBro insists that Brindza will suffer from "leg fatigue," which is some made up special teams jargon malarkey.  It is not an actual thing, regardless of what he says.