Men's Lacrosse: Rule Changes Will Change Face of Game in 2015

Shot clocks, faceoffs and bears! Oh my. Ok, not bears, but still. We've got some rule changes in store starting next season!

Share All sharing options for: Men's Lacrosse: Rule Changes Will Change Face of Game in 2015

The NCAA Rules Committee recommended some changes to the existing rules that will change the game starting as early as next season.

If you're new to watching men's lacrosse, you'd notice this season a couple things that regular lacrosse viewers weren't accustomed to.

The first was the "stall warning," where the referees would signal a 20-second hard count for teams that were taking too long to create offense. 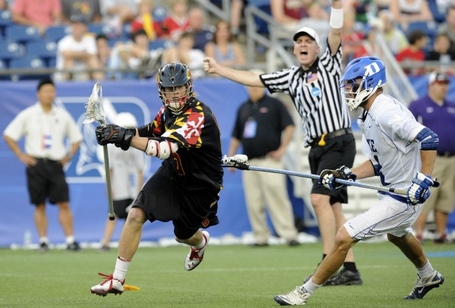 The image above shows the ref signaling a stall warning to Maryland. The problem with the stall warning was it gave the referees too much autonomy, and created a ton of inconsistency. ESPN commentators were rather blunt in their criticism of the officiating during the 2014 NCAA Tournament, and never really let up on that fact.

Clearly, the NCAA needed to adjust the format. The stall warning is, in theory, a great idea. Lacrosse teams that are up late in games will certainly delay as best as they can just like other organized sports (dumping to the corner in hockey, dribbling to the corner in soccer, etc.). However, the rule was too vague and differed from game to game.

The alternative to that was a shot clock. Lacrosse had experimented with one before, with limited success, but something needed to be done.

On Thursday, the NCAA attempted to find a happy medium to the shot clock/stall warning issue. In addition to the shot clock, the NCAA Rules Committee recommended a couple other changes that will likely change how we see certain parts of the game in 2015.

Starting this upcoming spring, the NCAA is recommending teams install digital 30-second shot clocks at both ends of the field. If they only have one clock, they can put it at midfield. By 2016, ALL Division 1 teams will be required to have the clocks. Division 2 and 3 teams get an extra year, and don't have to use the clocks until 2017.

So with the digital clocks, refs will call a warning, and the clock will start ticking. The same rules apply as before. If a team doesn't get a shot on goal off, it is a turnover. If they do, the warning is off.

However you feel about the implementation of the stall warning clock, I give the rules committee a lot of credit because they actually justify not going to a full shot clock in their release. Among them, defenses playing zone, creating less offense (the NBA has a ban on zone defenses because of this very issue), hard data (games averaged 2 stall warnings per game. Unnecessary to have a wide sweeping change) and the pace of the game in general.

In addition to the stall warning clocks, the most major change to lacrosse in 2015 will occur at the faceoff X.

Liam O'Connor was among the nation's best this year for the Irish, but how he won his faceoffs will be illegal next season.

The NCAA Rules Committee also recommended banning picking up the ball with the back of the stick on a faceoff. If you remember watching O'Connor, he'd win his faceoffs like this: 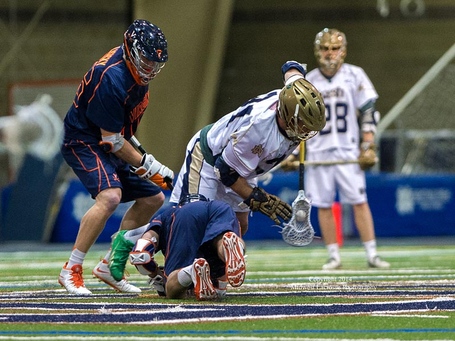 As you can see in the photo above, O'Connor has swept the ball away from Virginia's FOGO and has the ball trapped in the back of his stick. In 2015, this is going to be a faceoff violation. The Rules Committee's justification is that forcing the FOGO to sweep, trap or pick up the ball with the front of a stick will increase the competitiveness of the game, and bring back the spirit of the lacrosse faceoff back into it's intended purpose.

Other rule changes are minor, but were somewhat necessary:

While the changes seem minor, they will certainly change the game next season. Faceoffs will be more interesting to watch (and fun too. As a former LSM, I loved fighting for/picking up ground balls off faceoffs). The shot clocks will be in a prototype/experimental phase and we'll get to see them in action.

It's solid for lacrosse that they're making changes like this. While the shot clock would have certainly amped up the game, the rules committee opted for restraint. We'll have to see how much it'll work in 2015.