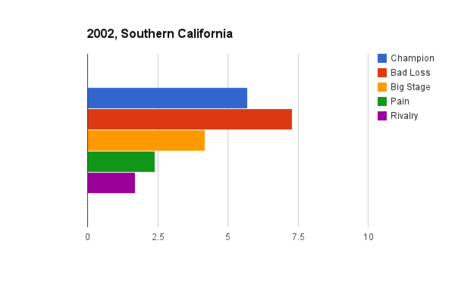 We left off the previous installment with the #16 loss in 2002 against Boston College. After two wins and climbing back to No. 7 in the country Notre Dame traveled to play No. 6 USC to end the regular season. It was the first time since 1988's No. 1 vs. No. 2 battle that both rivals came into the game ranked in the Top 10.

USC came in winning 6 straight games and were just starting to hit their stride under second year head coach Pete Carroll. Trojan quarterback Carson Palmer was in the Heisman race and needed a big game to make a statement to the country. What would follow was one of the worst beatings a Notre Dame team ever faced.

The Irish actually did lead 6-0 in into the second quarter but it slowly went down hill from that point forward. USC put up a touchdown and field goal to take the lead and promptly intercepted two straight Carlyle Holiday passes. Notre Dame did block a punt and scored on the play to take back the lead 13-10 but Palmer closed the half with a touchdown pass and 17-13 lead.

Not too bad, right? In the third quarter the Irish didn't pick up a single first down while USC produced another Palmer touchdown pass and a pair of field goals. Notre Dame mustered a couple first downs in the final quarter while USC added two more touchdowns to seal the blowout while Palmer had a field day against the Irish secondary.

The 425 passing yards by Palmer were the most ever given up by a Notre Dame defense, as was the 610 total yards. At the time, this was also the worst loss ever loss to USC by scoring margin. 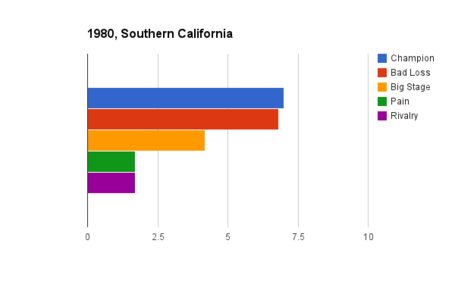 The 1980 season was supposed to be Notre Dame's great chance at another championship. By the end of 10 games the Irish stood at 9-0-1 and No. 2 in the nation before a trip to Los Angeles against rival USC. That dream of a title was still a major reality. USC came into the regular season finale struggling going 2-2-1 down the stretch and losing their prior 2 games to Washington and UCLA--although the Trojans were still ranked 17th in the country and a talented squad.

Things looked good for Notre Dame after USC starting quarterback Gordon Adams and tailback Marcus Allen were ruled out due to injuries suffered the previous week. However, the Irish offense would stall big time on the big stage inside the Coliseum. Notre Dame fumbled in the middle of the second quarter which led to a USC touchdown and 7-0 lead. The Irish later got a stop but gave the ball right back after roughing the punter. Again, USC scored on a field goal after the mistake to go up 10-0.

In the second half Devine benched freshman quarterback Blair Kiel in favor of Mike Courey. It looked to pay off on ND's first drive of the half but the Irish were stuffed on the USC goal line on fourth down. Luckily, USC fumbled on the ensuing possession but the Irish had to settle for a field goal deep in Trojan territory.

The game finished with USC tacking on a touchdown and another field goal while the Irish offense continued to look inept. By the end of the game Notre Dame had gained just 120 total yards and the dreams of a title were smashed. This was the fourth worst loss and tied for the second fewest points ever scored by a Dan Devine-led Notre Dame team. 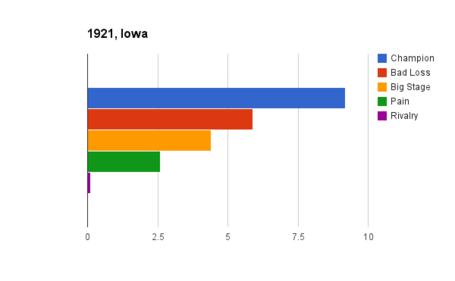 In the early years of ND football prominence it was a struggle to fill out a tough schedule. However, 1921 finally looked like the year that fourth-year head coach Knute Rockne could lay claim to a national title. His program hadn't lost since the 1918 season in his first year on campus and desperately needed big wins for the football elite take Notre Dame seriously.

In this season the school had games lined up against Purdue, Nebraska, Indiana, Army, Michigan State, and this early season matchup against Iowa. It was clearly the toughest slate in school history. Notre Dame opened up the season by pounding two cupcakes (Kalamazoo and Depauw) by a combined 113-10. However, a trip to Iowa City would turn out to be tougher than expected since the Hawkeyes were fielding an especially strong team.

Despite out-gaining Iowa 398-245 a handful of turnovers crippled Notre Dame and snapped Rockne's 20-game winning streak. Notre Dame would go on to win the rest of the games in 1921 and finish the season out-scoring their opponents 375 to 41. This loss very likely prevented Rockne from winning his first National Championship. For their part, Iowa would finish the season undefeated and the champions of the Big Ten. 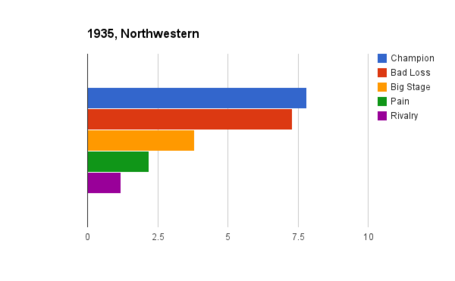 Not much survives in print from this game but there is a wonderful video below that chronicles the game in South Bend. The history behind this game was that Notre Dame was in its second year under former player Elmer Layden and looked like a national power again in line for a National Title. The program was just coming off the "Game of the Century" win over Ohio State in Columbus which would end up the only loss on the season for the Buckeyes. That win was probably the biggest for the Notre Dame program in between the Rockne and Leahy era's but was followed up by a classic let down at home the next week.

Northwestern was a gritty program but came into this contest at 2-3 having just beat Illinois the prior week. Notre Dame was 6-0 for the first time since Rockne's final title-winning 1930 season. In most respects this victory by Northwestern was an enormous upset, particularly because Notre Dame would go on to tie Army at Yankee Stadium and defeat Southern Cal to finish the season--possibly losing out on a championship. 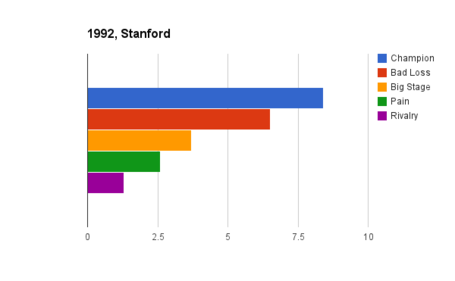 Some call the 1992 Fighting Irish squad one of the most talented, if not the most talented squad, of the post-1986 era. Notre Dame ran out players like Mirer, Bettis, Becton, Brooks, Zeller, Carter, DuBose, Hentrich, Irv Smith, Mayes, Burris, Dawson, Taylor, and Bryant onto the field during this season. Clearly just an insanely loaded roster.

The Irish started out No. 3 in the country and dominated Northwestern in week one before tying No. 6 Michigan at home. Falling to No. 6 following the tie the Irish would calmly beat Michigan State and shutout Purdue 48-0 prior to the Stanford Cardinal making this trip to South Bend. Stanford had upset Notre Dame during their last trip to South Bend (Loss #19) under Dennis Green and were now 3-1 under first-year head coach legend Bill Walsh.

Notre Dame played reasonably well in the first half taking a 16-6 lead into the break. However, the team came out listless in the second half. After the game head coach Lou Holtz blamed it on working the players too hard during exam week but it was turnovers that proved fatal for the fans watching in the stadium and on television. Despite committing just one penalty and converting 10 of 19 third down opportunities on the day, Notre Dame was shutout in the second half.

Bettis lost a fumble on the first series of the second half and soon enough it was 16-13. The Bus also fumbled again on the next Irish possession. Following several back and forth punts a Stanford drive gave the Cardinal a 20-16 lead. Notre Dame drove down deep into Stanford territory but a Mirer pass was intercepted in the end zone. A field goal resulted and the lead pushed to 23-16 in favor of the visitors.

Later in the fourth quarter Stanford added another score and had the game in hand. The Irish attempted a lateral pass on the ensuing kickoff but the ball was intercepted, leading to another Stanford field goal and the final 33-16 score. Five turnovers and one awful second half of football. This game would remain the worst home loss by Lou Holtz while coach at Notre Dame. The Irish would go on to win their last 7 games of the season and threw away a great chance for a National Championship with this loss.