In this edition of Iso Cam, we take a closer look at Matthias Farley in man coverage.

In 2012, Matthias Farley had the best year of his career, playing a key role for one of the top defenses in the country. In 2013 his play slipped. This spring a new coordinator arrived in South Bend and Farley was given a chance to reclaim his status as a trusted defender in the form of a position switch.

In the new scheme, Farley will be asked to play tough against the run, blitz off the edge and play man coverage. Did you shudder a little when you read the last part?  Farley (and the rest of the Irish defense) struggled in man coverage last year. Based on what I saw in the Blue and Gold game, Matthias Farley still has some work to do in the man coverage department. Let's take a look at the film and I'll show you what I mean. 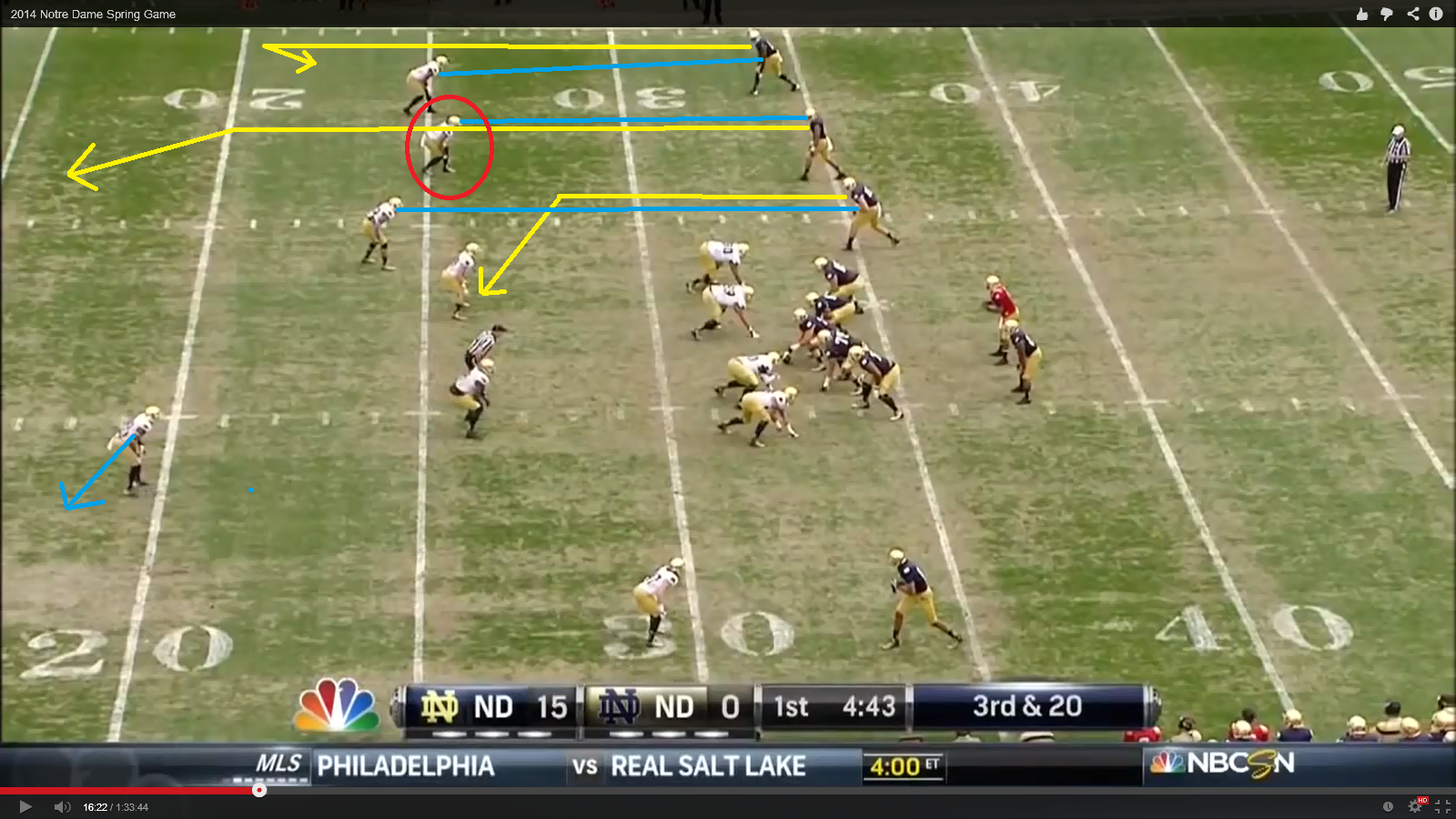 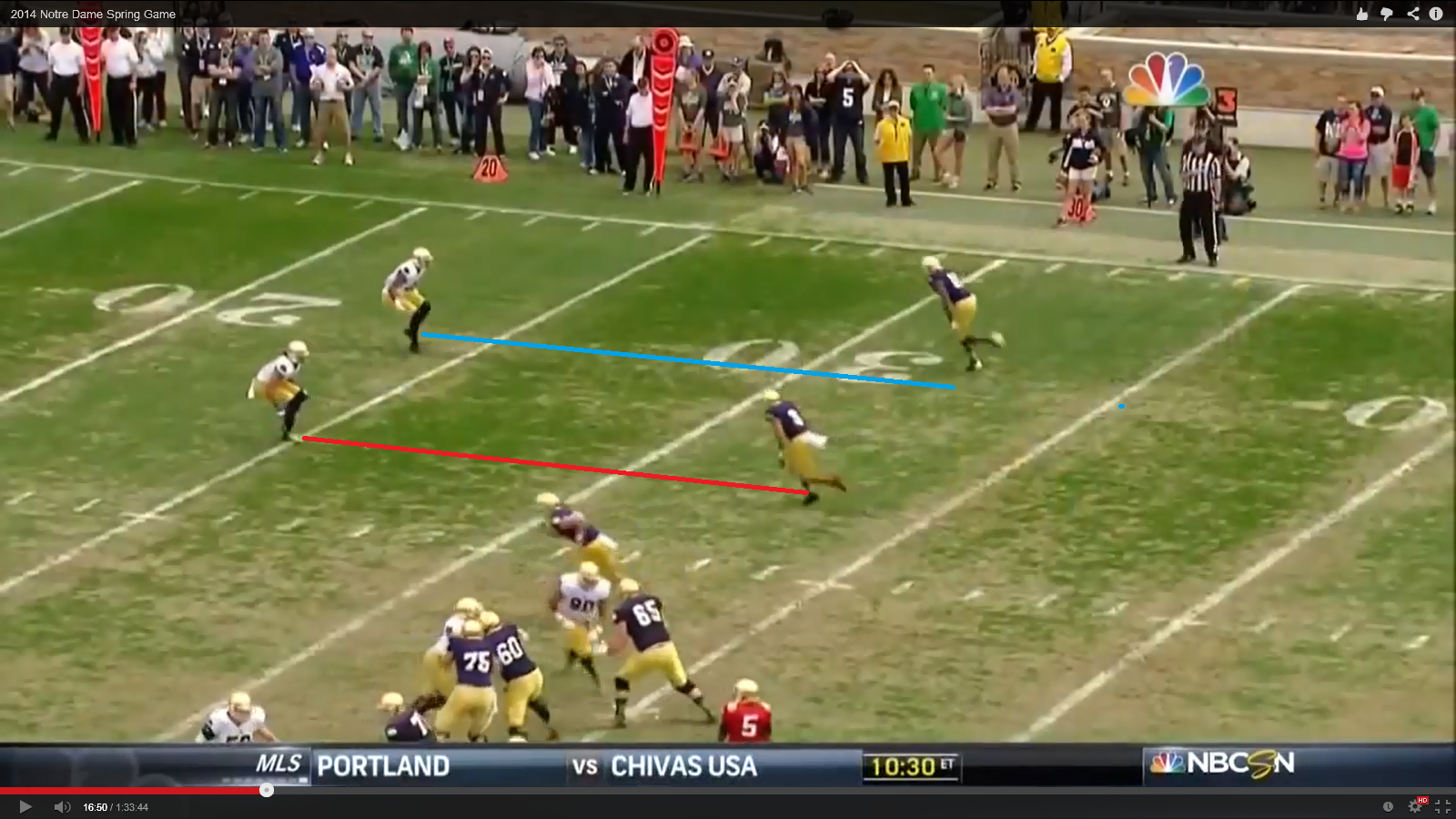 A fraction of a second after the snap. Farley has made a small error in his technique that will have big consequences later on.

Farley isn't shaded to a side, rather he is aligned head up on the receiver (red line). In this coverage he should be shaded to the inside like corner Cole Luke # 3 (blue line). 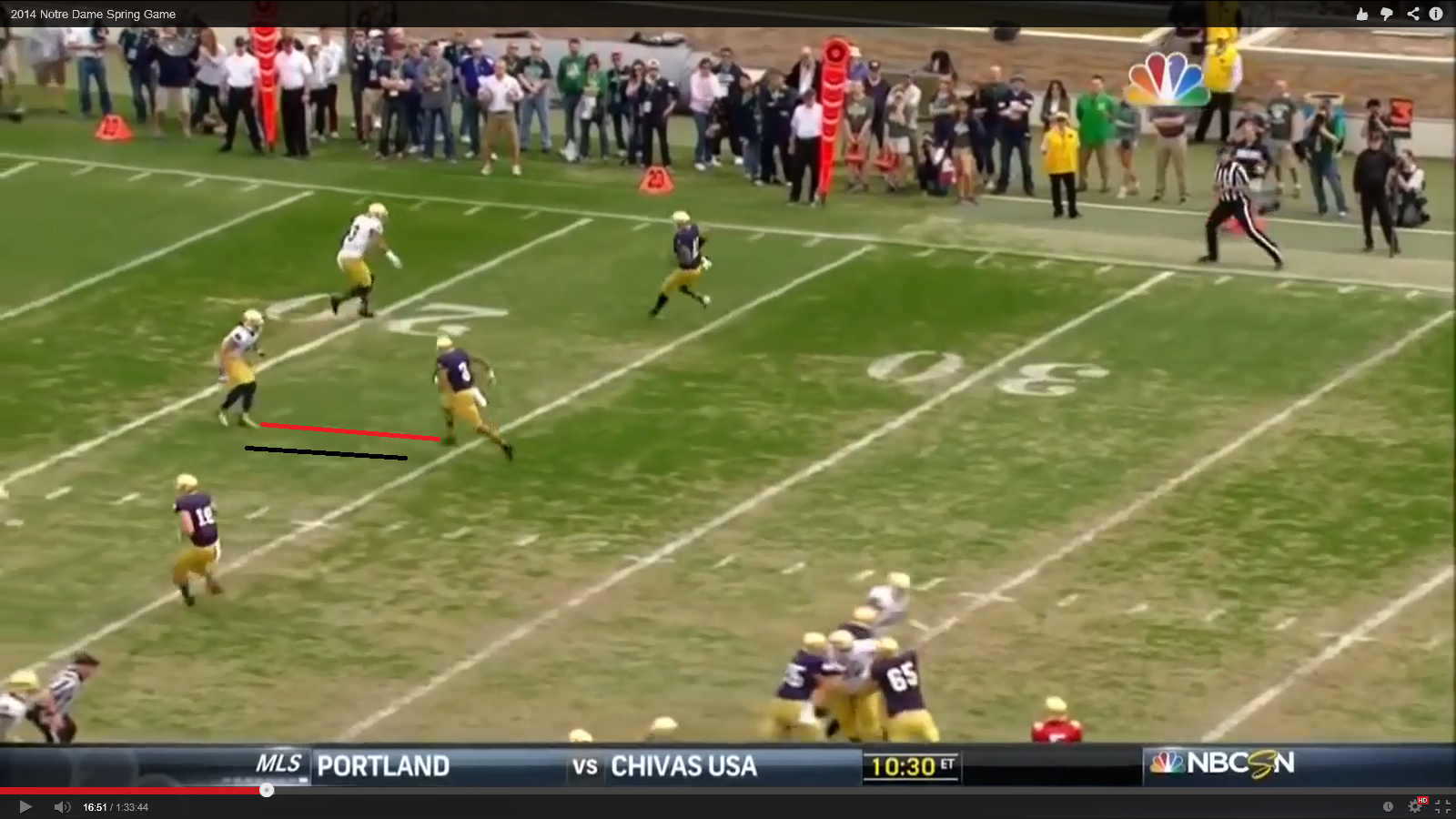 Farley would be better served if his alignment was inside, closer to the black line as opposed to the red line. 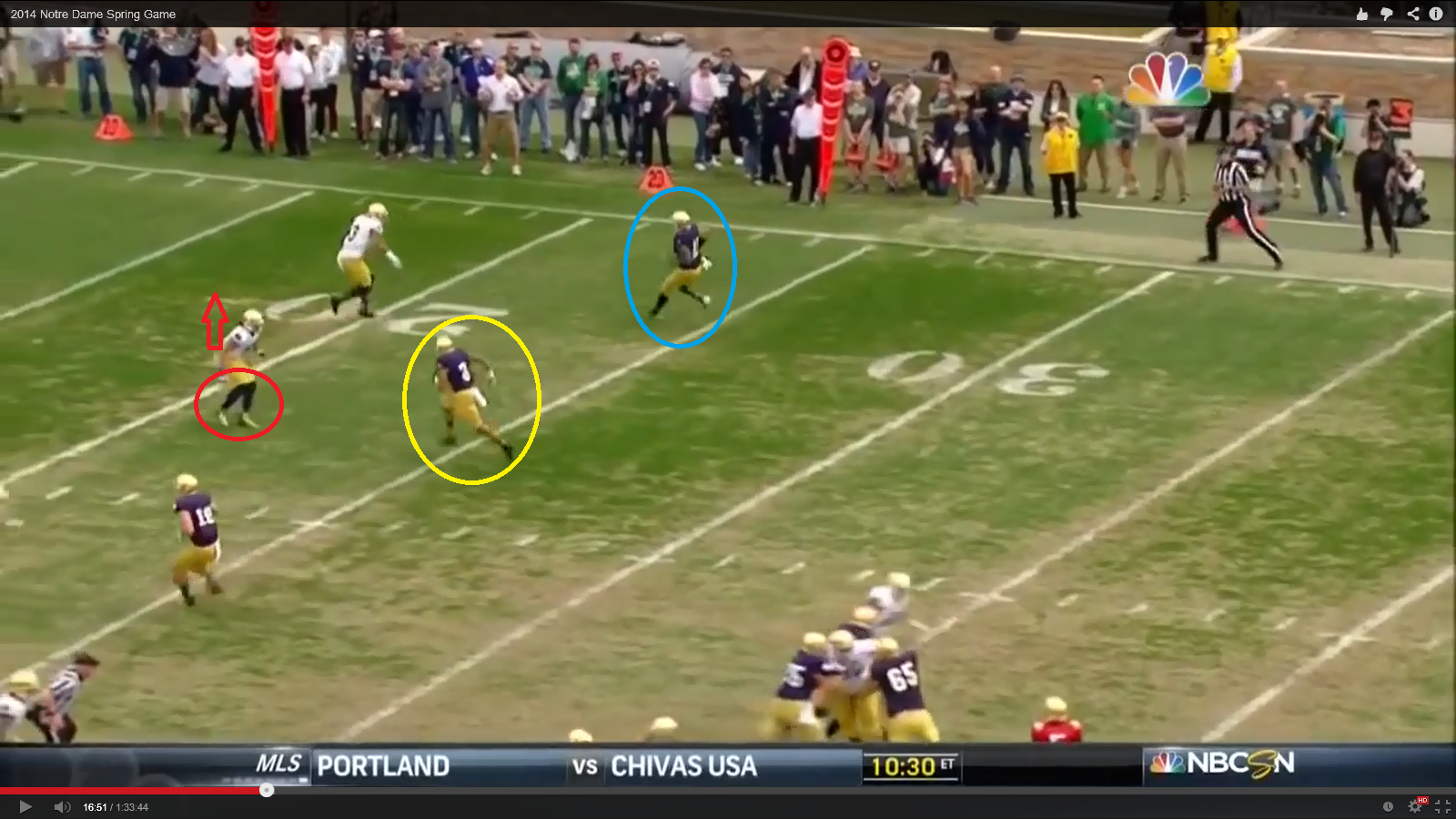 Farley's alignment isn't great, but he also has some other issues with his technique. The first problem is that as he back pedals his hips rise (red arrow).  High hips make it more difficult to change direction when the receiver makes his break.

Even worse is Farley's stride. Look at how short it is (red circle). It looks as though he is decelerating. Take a look at Carlisle's stride (yellow circle). He's in full sprint. I'm no physicist, but my guess is that if Carlisle is running at full speed and Farley is slowing down, that could mean trouble.

As an aside receiver Justin Brent # 11 (blue circle) is breaking down preparing to make a cut. Note the difference in stride compared to Carlisle. Defensive backs need to be able to read these obvious cues and react appropriately to them. 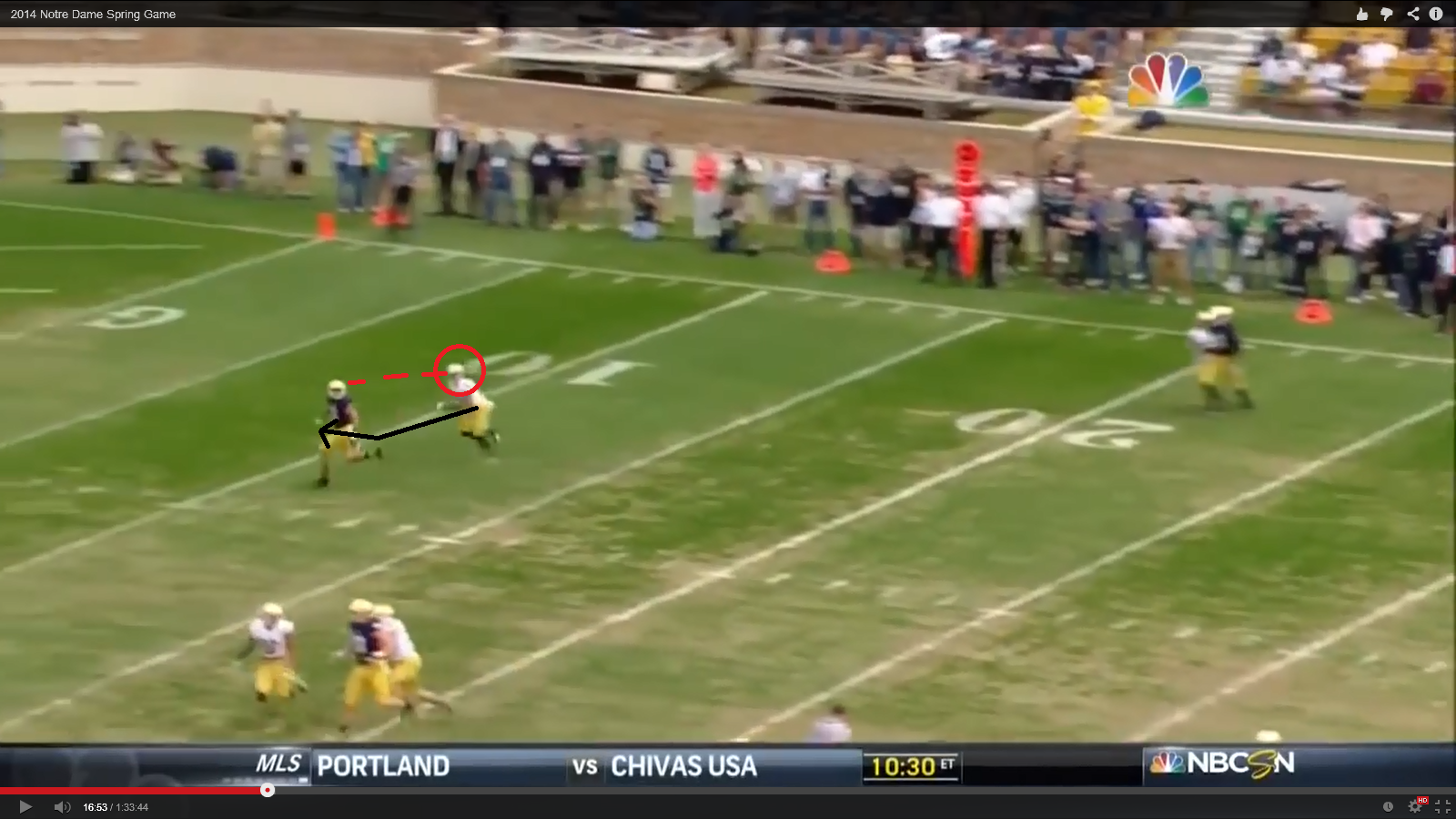 Carlisle blows by Farley like he's standing sitll. All is not lost though. If you play man coverage, sometimes this happens. The best players don't panic in this situation. They focus on their man and follow the black arrow to get in the best position to make a play when the ball arrives.

It's hard to see on this screen shot, but when Farley realizes that Carlisle is blowing by him he looks back at the quarterback (red circle). This is a bad idea, it's hard to run fast when you are looking backwards. Feel free to go outside and try it now (Disclaimer: OFD accepts no responsibility for any injuries you or others may sustain as a result of trying this, for more information please contact my attorney MotS. If you do get hold of him, could you ask him to call me? I've been trying to get hold of that guy for a month).

Farley should be focused squarely on his man (red dotted line) and accelerating to get back into position (black arrow).

In fairness to Matthias Farley, it is possible that he was expecting safety help to the middle. However, the pre-snap alignment shown here 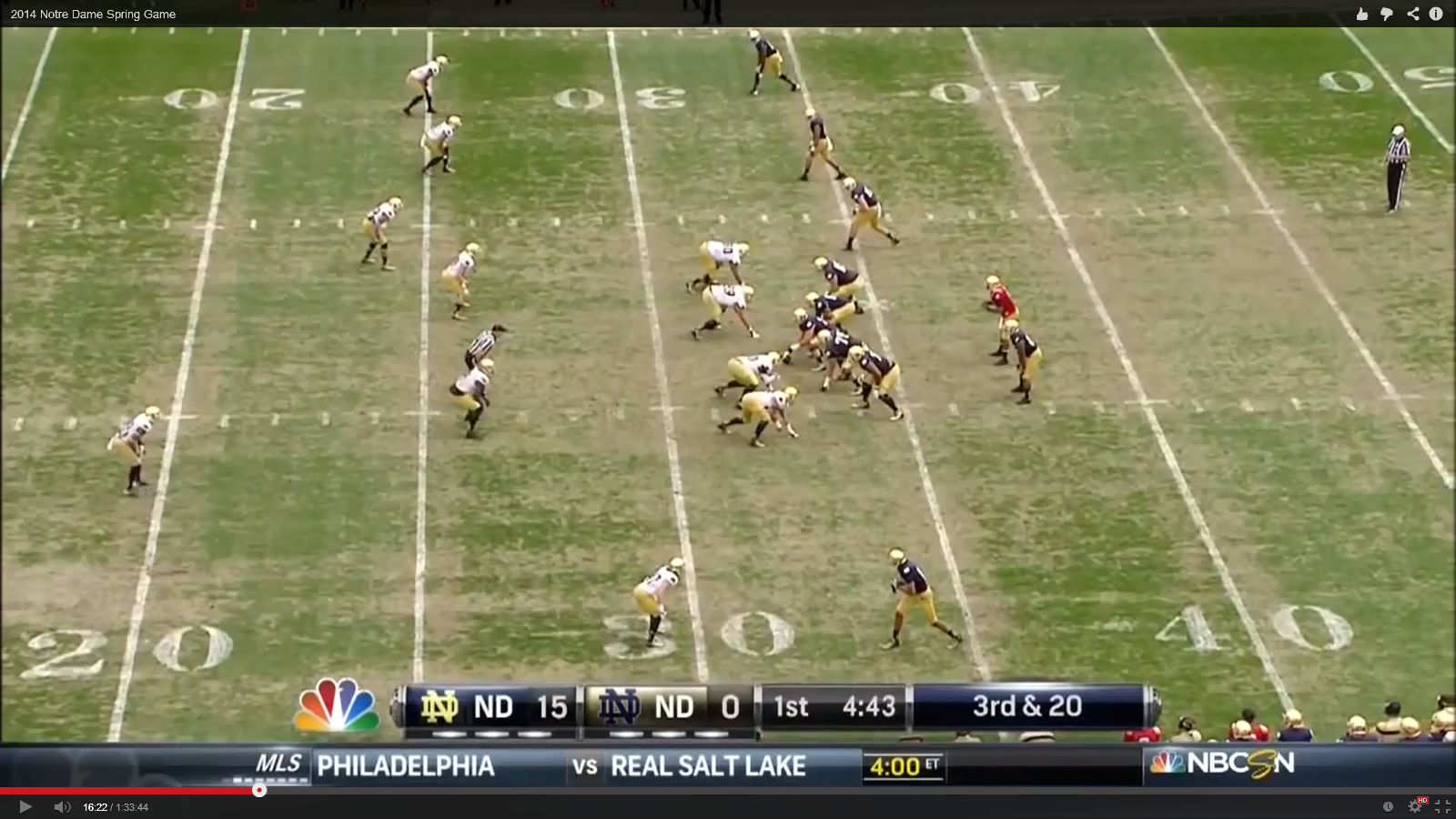 doesn't suggest safety help over the top on the trips side of the formation.

I wasn't in the huddle, so I can't say for sure what the coverage was. It's possible that Farley was the victim of an error by the safety and that's why he was shaded to the outside (although this doesn't explain Carlisle blowing by him). From the pre-snap alignment, it sure looks like 0 coverage on the trips side, which means Farley should have taken away the inside.

Using Occam's razor, the most likely explanation is the simplest one. Farley blew the coverage. Take a look at the video and you can judge for yourself.

Fortunately, for Farley the ball was overthrown and there was no harm done. There is a lesson here though. Small breakdowns in technique become magnified in man coverage and can become big problems later.

Matthias Farley has some work to do to improve his man cover technique. I believe he can and will improve. He's experienced, he's a good athlete and he's a veteran player. It would be nice to see him transition from internet whipping boy, to valued member of the defense.