In this edition of Iso Cam, we take a look at one of the staples of Brian Kelly's offense.

Old school, smash mouth football. Man to man blocking schemes, downhill running with a lead blocker. Like the grass at Notre Dame stadium, old school football has been replaced by a modern version of the original.

Similar to chimpanzees and humans, most "new" concepts in football share a considerable percentage of their DNA with "old school" football. A perfect example is the stretch play (it has other names, but we won't get hung up on semantics at this point). A cornerstone of the spread offense, it combines elements of old and new school football. Let's take a look at the film and I'll show you what I mean. 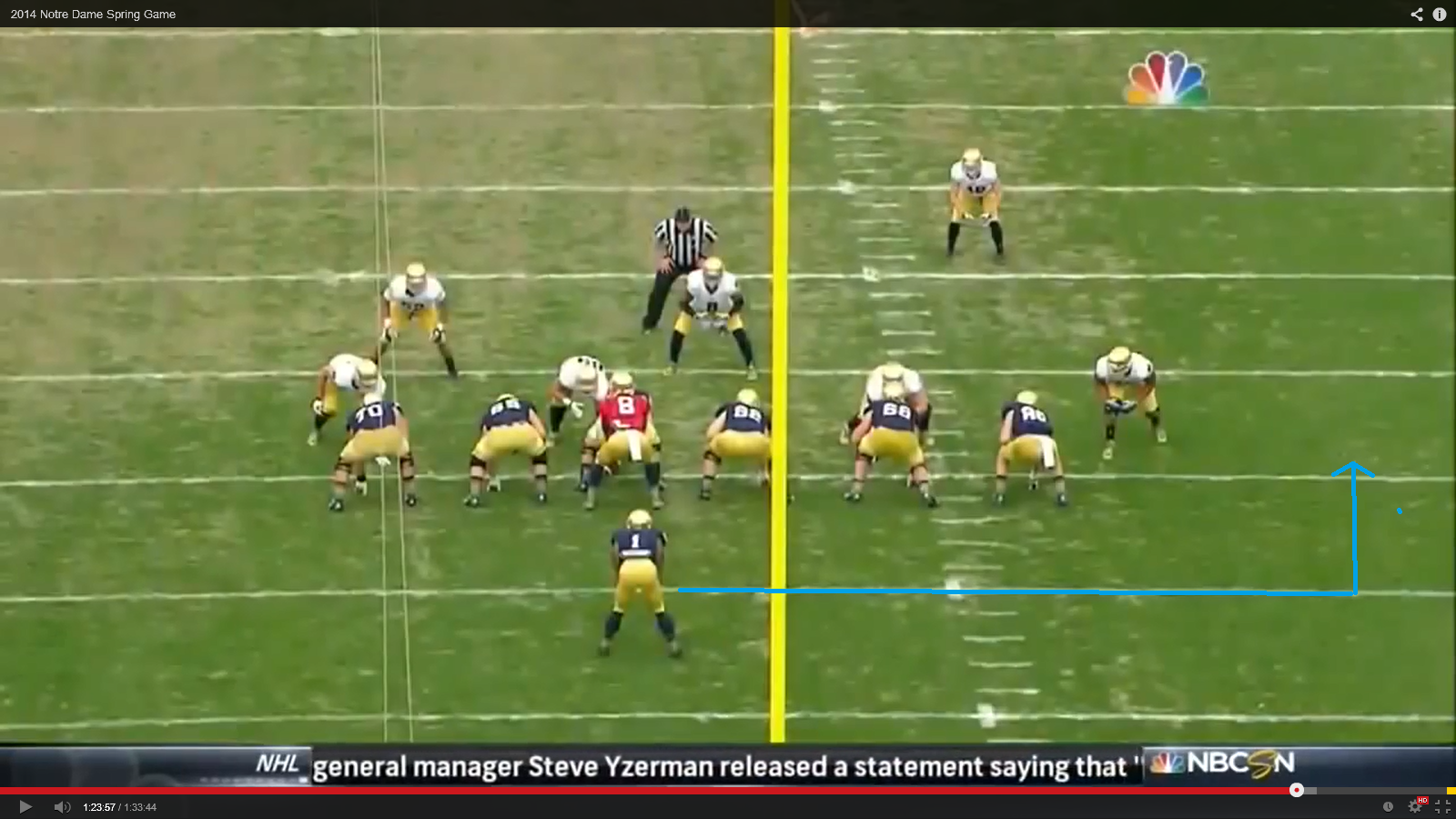 This will be a stretch play in the direction of the blue arrow. It's designed to set up a double jeopardy situation where the defense is wrong no matter what it does.

As the name implies, the goal of this play is to stretch the defense horizontally (towards the sideline). The ball carrier is taught to sprint towards the sideline (blue line). If the defense is too slow to react, the ball carrier continues to the outside. If the defense flows too fast, blockers adjust their technique, the running back makes a cut and speed turns into a liability. From a defensive perspective, you're damned if you do and damned if you don't. 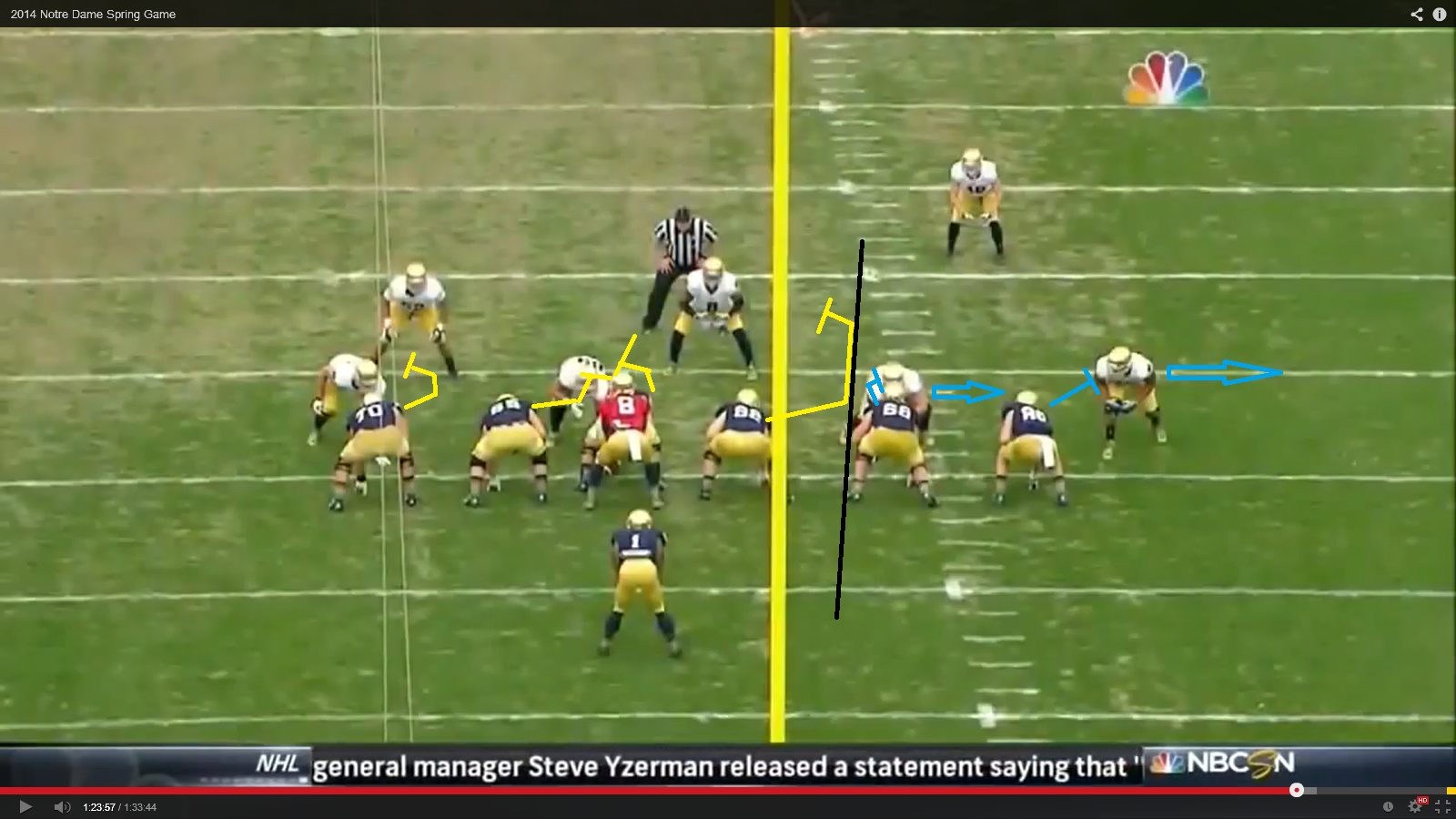 To the left of the black line, the blocking scheme is pretty traditional. The play is going to the right, the linemen are going to work to the right and try and seal the defenders to the inside (yellow lines).

To the right of the black line the blocking scheme morphs into something different. The tackle and the tight end aren't going to try and seal the defenders inside (the old school way). They are going to use momentum and technique instead. The defenders will flow in the direction of the running back (blue arrows). The blockers will make contact with the defenders back shoulder (blue lines) and try to push them past the running back. 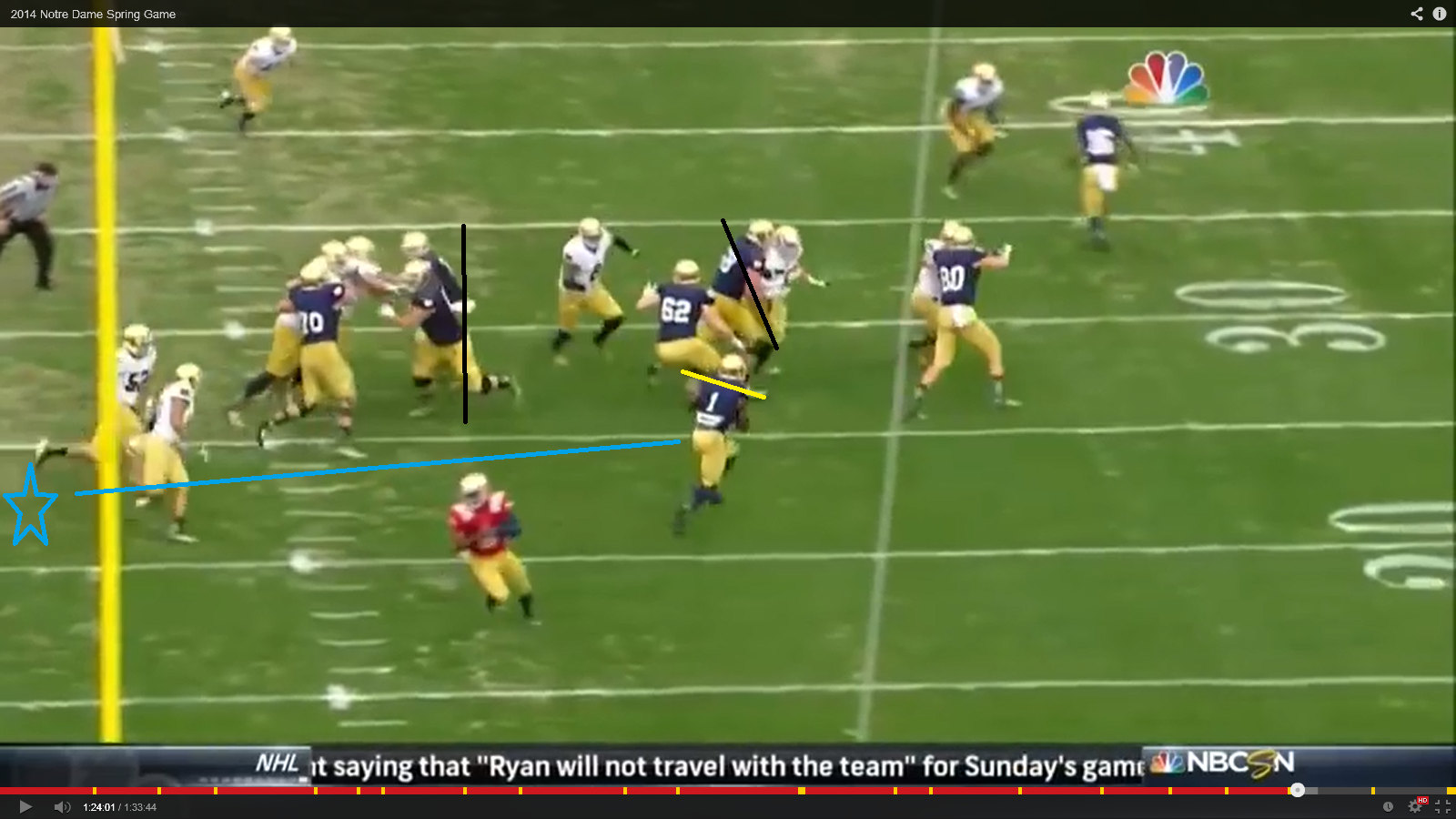 Running back Greg Bryant (# 1) started around the blue star. He has now stretched the play towards the sideline (blue line). This stretching motion creates seams in the defense. Once Bryant identifies a seam, he's expected to turn his shoulder pads from  the sideline (yellow line) to the goaline as quickly as possible.

The offensive line is responsible for making sure the seams stay open long enough for Bryant to get through. On the left hand side they've created a nice seal by cutting off pursuit from the backside. On the right hand side they've done a great job of widening the defense. If they can hold these blocks there will be an obvious seam between the black lines. 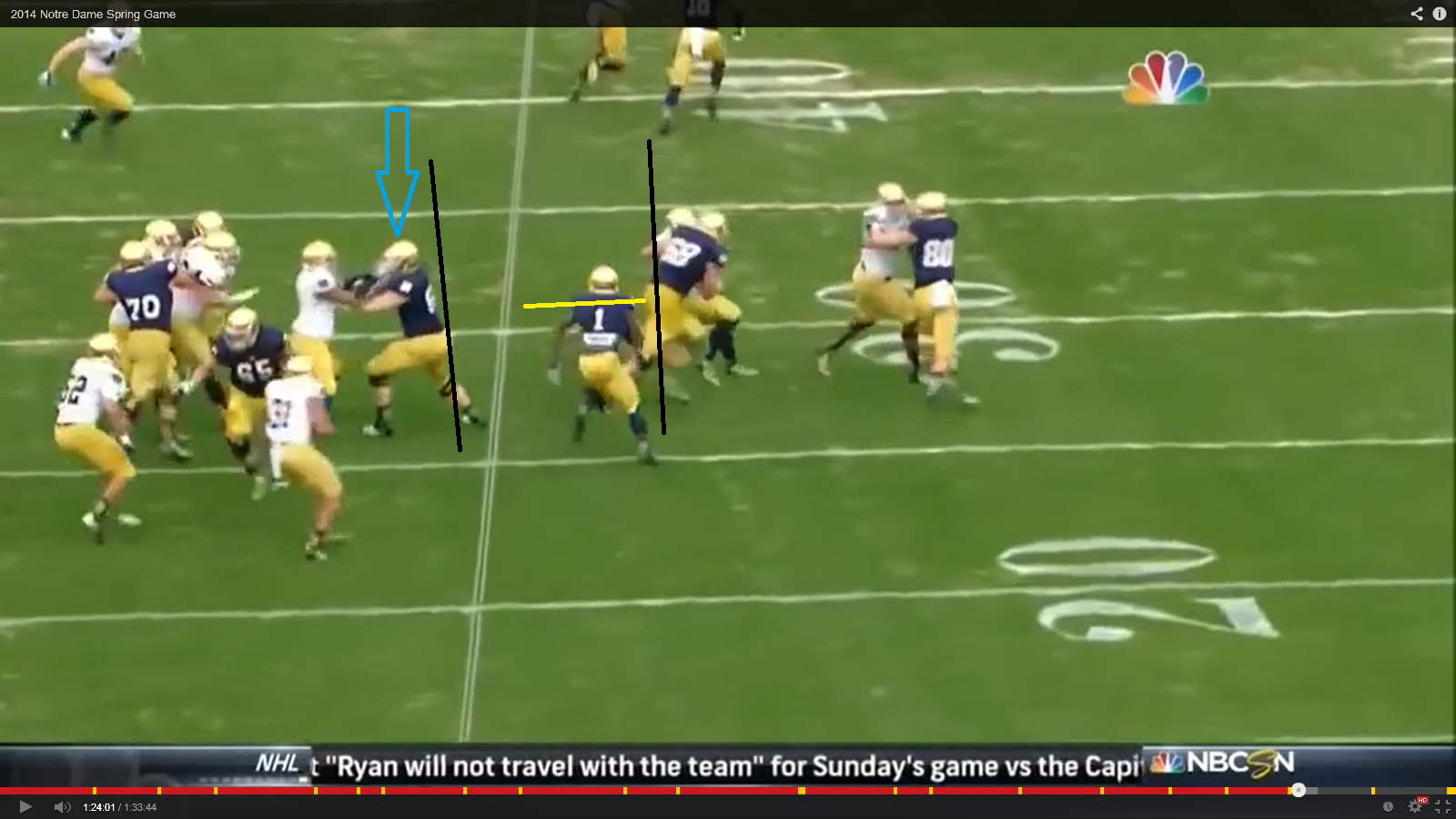 Offensive guard Colin McGovern # 62 (blue arrow) does an excellent job of sealing the last remaining threat, linebacker Kendall Moore (# 8). This was a very difficult block as it required McGovern to quickly redirect his momentum from an outside to inside trajectory, then get his hips around and seal the defender. Bryant now has a clear alley to run through. He does an excellent job of squaring his shoulders (yellow line) and running downhill.

North/south running? A lead blocker taking on a linebacker at the point of attack? Hmmmm... this sounds suspiciously like old school, smash mouth football to me.

As an aside, since Harry Hiestand took over I've noticed the Irish becoming increasingly proficient at this type of block (running to the outside and quickly reacting to make a block back to the inside). It's testament to the type of talent Notre Dame is recruiting along the offensive line and the skill of coach Hiestand.

When you watch the video, pay close attention to how quickly Greg Bryant goes from running towards the sidelines to towards the goaline. Uh, yeah, he's good.

The stretch run is considered to be a "new school" play. It's run out of a spread formation, from the shotgun and starts with the running back heading, gasp, east and west. As the play progresses old school tendencies start to emerge. A lead blocker takes on a linebacker at the point of attack. The running back gets his pads north/south and runs downhill. The more things change, the more they stay the same. Let's hope we get to see Greg Bryant and the rest of the Notre Dame running backs doing a lot of this in 2014.