The first post-Rockne loss, shocked by Stanford, blown out by Nebraska, and more. 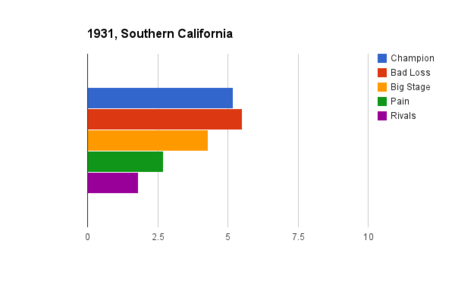 Notre Dame was forced to move on in the 1931 season after the tragic death of head coach Knute Rockne but in football terms there were questions whether Hunk Anderson could keep up the feverish pace of excellence established over the prior two years' back-to-back National Championships.

Despite a 0-0 tie to Northwestern in week two things moved along quite well, though. Not great--and there were many signs of cracking early on--but well enough to stay unbeaten. Notre Dame welcomed USC to South Bend in late November sporting a 6-0-1 record while outscoring opponents 201-12. The Trojans came in at 6-1 after dropping their first game of the season to St. Mary's so both clubs were still in the hunt for a championship.

Notre Dame controlled the game for the majority of the first three quarters. Before the half a 55-yard run put the Irish on the board and it took just 3 plays into the second half to build a 14-0 lead. That's the way things stood into the fourth quarter when the USC comeback began.

The Trojans first benefited from a pass interference penalty that placed the ball deep in Notre Dame territory. From there, they punched it in but had their PAT blocked. Later in the quarter with time running down USC scored again to make the score 14-13 in favor of Notre Dame. With just over a minute left, the USC quarterback completed passes of 50 and 23 yards to set up a game-winning field goal which Johnny Baker nailed.

Thus ended Notre Dame's 26-game unbeaten streak. Notre Dame would go on to lose to Army in New York the next week and slowly sink into a post-Rockne depression while USC would crush Washington and Georgia before upending Tulane in the Rose Bowl to win the school's second National Championship. 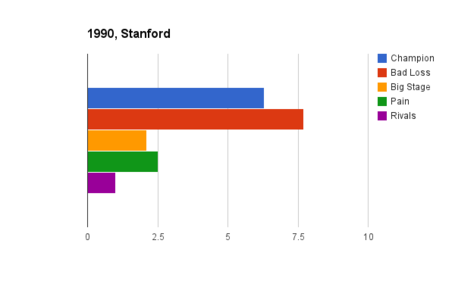 It was a golden era for Irish football. National Champs in 1988, only 1-loss to Miami in 1989 and heading into 1990 as the pre-season No. 1 team in the land. The Irish came into this game with a couple close wins over ranked Michigan and Michigan State and an easy win over Purdue. The Cardinal were scrappy but unranked with a 1-3 record.

Without the services of Rocket Ismail (thigh bruise) the Irish had a heck of a time fielding punts in the strong winds inside Notre Dame Stadium. Rickey Watters fumbled two and Adrian Jarrell dropped one as well. The Cardinal would score 14 points of those 3 turnovers. However, the Irish still led 24-7 in the second quarter and coughed up this game.

Notre Dame sat back in a soft zone and Stanford quarterback Jason Palumbis began carving up the Irish secondary. Before halftime a drive ended in a score and the Cardinal successfully converted a 2-point conversion to trail just 24-15. In the second half Palumbis caught fire completing 15 of 17 passes and the game stood at 31-29 Notre Dame late in the fourth. On Stanford's last drive Palumbis converted a 4th & 2 with his feet and they ultimately scored the go-ahead touchdown.

With 36 seconds left Notre Dame quickly moved the ball into Stanford territory but a Rick Mirer pass to Derek Brown fell incomplete in the end zone as time expired. The Cardinal pulled off the upset of the year snapping Notre Dame's 19-game home winning streak while slaying the No. 1 team in the country. 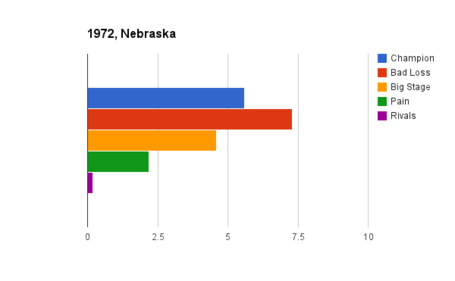 The 1972 season was a tough one for Irish fans as the team lost as heavy favorites to Missouri (one of 20 that missed the cut for the Top 75 list) and lost the regular season finale to USC (Loss #37). Still, the team finished at 8-2 and had a date with No. 9 Nebraska in the Orange Bowl.

The Cornhuskers were just as elite as the Irish in this era, if not more so. Nebraska won back-to-back National Championships in 1970-71 and their 2 losses in 1972 came by a combined 6 points while the electric Johnny Rodgers came into bowl season fresh off a victory in the Heisman ceremony.

In total, Nebraska piled up 560 yards to just 207 yards for Notre Dame. The Huskers led 40-0 before the start of the fourth quarter and cruised the rest of the way playing mainly backups. It would be Nebraska's third straight Orange Bowl win and head coach Bob Devaney's final game before Tom Osborne took over the program. The prior loss for Notre Dame to USC was at the time the worst suffered by head coach Ara Pareseghian only to be eclipsed by this game. 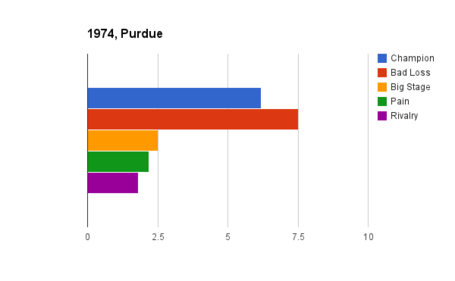 Notre Dame opened the 1974 season as the No. 2 team in the country and ascended to the No. 1 ranking after a win over Georgia Tech in week one. The Irish then pummeled Northwestern before taking on pesky Purdue who were a pain in Ara Parseghian's side during the late 1960's. Notre Dame went 1-4 against the Boilers from 1965 to 1969 with Purdue being ranked in every one of those games. However, the Boilers fell off to start the 1970's and had lost 4 straight to the Irish while being unranked in each contest.

Now, the 0-1-1 Purdue team came to South Bend once again unranked and 28-point underdogs to the top team in the country and defending National Champions.

A disastrous start to this game absolutely killed Notre Dame. The Irish fumbled on the second play of the game and Purdue scored off the turnover. After a punt by Notre Dame it was running back Pete Gross who scampered 52 yards for a touchdown. On the third Irish series quarterback Tom Clements threw an interception that was taken back for yet another touchdown. Before the first quarter ended Purdue added a field goal and left the home crowd stunned with a 24-0 lead.

Notre Dame did fight back and close it to 24-14 but another Clements interception led to Purdue's final touchdown in the fourth quarter. Despite out-gaining the Boilers 407 to 270 the slow start and turnovers led to this massive upset. This is the only game over the past 50+ years in which the Fighting Irish lost at home to an unranked Purdue squad. 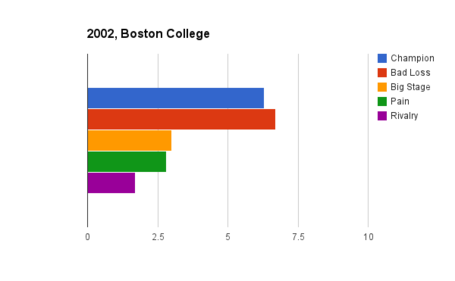 The 2002 season was the first under Tyrone Willingham and a Return to Glory™ mirage at its finest. Leading up to this game the Irish were 8-0 and ascended to No. 4 in the country after beating Florida State in Tallahassee. However, there were some serious concerns on offense where, despite the undefeated record, only 17 touchdowns were scored through 8 games. That poor offense would come back to bite the Irish against Boston College.

The Eagles were 4-3 on the season and relished the opportunity to spoil Notre Dame's season especially after the Irish came out of the tunnel in green jersey's for the first time in a few years. On the first series Ryan Grant was stopped on 4th and 1 from the Boston College 20-yard line and Grant later fumbled on the second series. The Eagles scored off the latter turnover and led 6-0 after the first quarter and a missed PAT.

The third Irish series produced a missed field goal by Nick Setta. Pat Dillingham then took over for Carlyle Holiday at quarterback but the results didn't change. After a punt, Dillingham 'threw' what is perhaps the worst interception in school history by shoveling the ball right into the hands of BC defender Josh Ott who rumbled 71 yards for the pick six. Following a successful 2-point conversion the Eagles led 14-0. Dillingham led a three and out and then finished the half with a second interception.

With Holiday back at quarterback the Irish mounted a long drive to start the second half but lost a fumble at the Boston College 15-yard line. The Irish picked off quarterback Brian St. Pierre on the very next play only to have Ryan Grant cough up another fumble at the Eagle 22-yard line.

Still 14-0 early in the fourth quarter the Irish incredibly turned the ball over on downs just outside the BC red zone. Finally, with just over 2 minutes to play Holiday found Maurice Stovall for a 20-yard touchdown. Notre Dame got BC to punt but only 22 seconds in the game remained. A holding penalty on the first play effectively sealed the deal as Holiday's desperate pass over the middle of the field fell incomplete.