The latest updates at receiver, tight end, and on the line.

Welcome to the latest update to the Recruiting Big Board.

Since our last update a pair of receivers came off the board. The first was (TX) Damarkus Lodge .984 who gave a verbal to Texas A&M. In a small surprise it was (MO) Alex Ofodile .952 committing to Oregon a few days after a visit to Eugene.

By now you should know that Miles Boykin plans on announcing tonight and is considered a heavy lean to Notre Dame.

If Boykin commits to the Irish there is precious little room left for another wideout. Recently, Cordell Broadus reiterated that he wants to visit Notre Dame. Notre Dame looks to be in the top 3 for E-Street Brown who is now being personally recruited by Brian Kelly. It would appear ESB is Notre Dame's top remaining target right now.

K.J. Hill has talked about coming for an official visit but did not show up to the Irish Invasion. He's close to being downgraded to Cold.

The speedy Ryan Newsome released a Top 5 a couple of weekends ago.

He plans on taking official visits to all 5 schools in the fall.

The big board at tight end shrinks by one as (CT) Chris Clark .953 moved up his Opening decision timeline and committed to Michigan on June 19th.

There are not many indications pointing to Notre Dame taking a tight end in this class right now.

The Duke Blue Devils snagged a big commit recently in the person of (CA) Reno Rosene .871 who gave his verbal shortly after our last update.

All three Irish commits on the line showed up for the Irish Invasion, including Jerry Tillery who made another trip to LSU prior to coming back to Notre Dame. The Tigers are clearly not giving up and while Tillery is undoubtedly feeling family pressure to stay home it's good to know he's seeking counsel with Father Hesburgh. 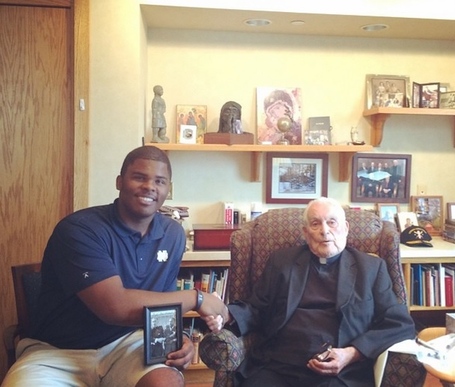