In this edition of Iso cam we take a closer look at Notre Dame recruit Shaun Crawford in man coverage.

Recruiting. It's a strange world isn't it? 17 & 18 year old high school kids who have never played a single collegiate snap rule the college football off-season. Coaches travel the country to Kowtow at their feet. Recruiting experts depend on them for their livelihood. Fans scrutinize and agonize over their every move.

Notre Dame 2015 commit Shaun Crawford certainly appears to be a player worth Kowtowing over. As Jamie noted in this article, Crawford is an outstanding athlete and possesses skills tailor made for the new defensive scheme coming to South Bend.

Like any top high school recruit, Crawford has some obvious strengths, but also has some aspects of his game that he'll need to clean up at the college level. Let's take a look at the film and I'll show you what I mean. 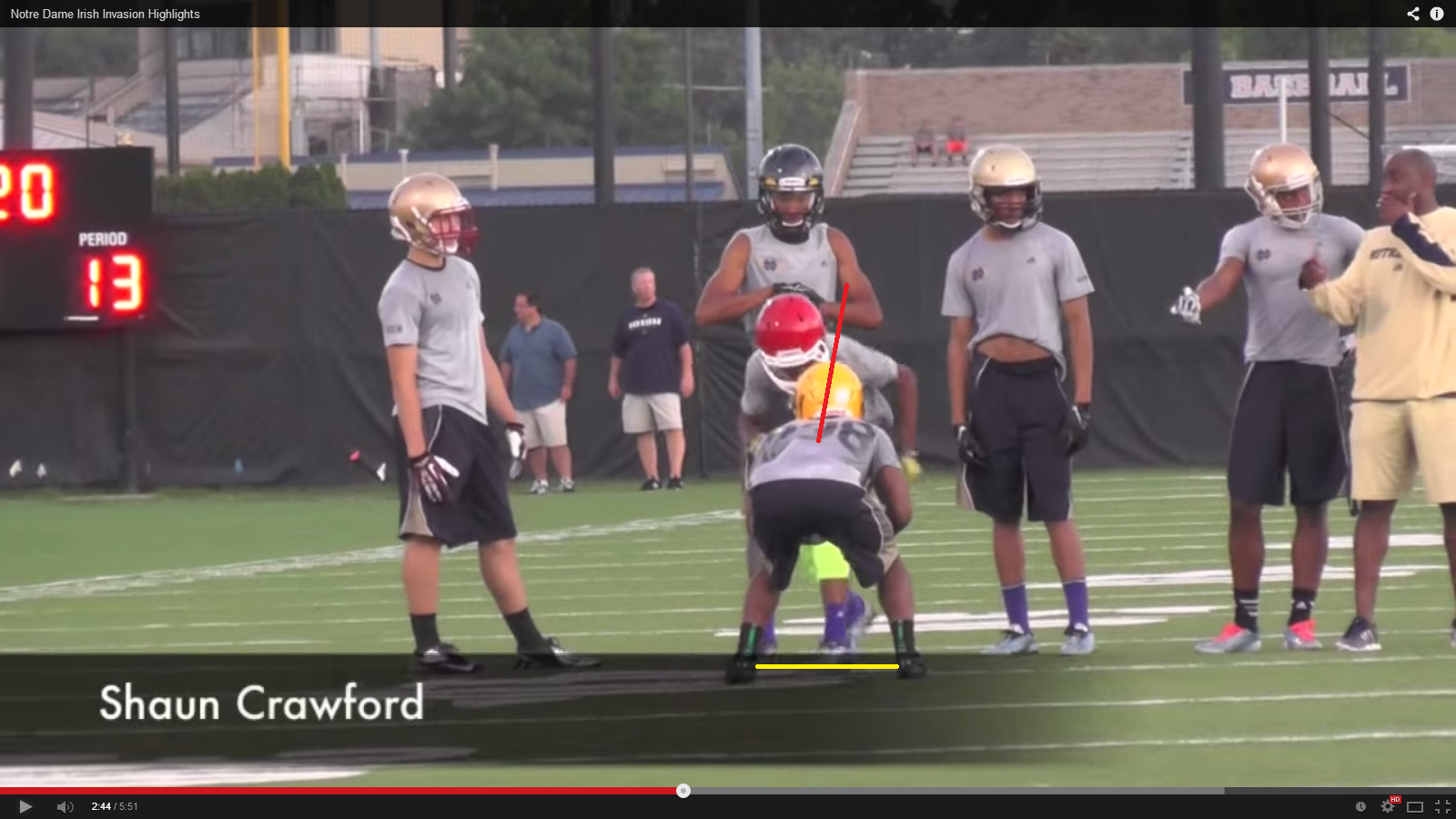 This footage is from Irish Invasion. In this drill Shaun Crawford (yellow helmet) will be covering a receiver one on one.

Pre-snap he's in great shape. Shaded slightly inside (red line) and in a nice athletic stance. Pay close attention to the width of his feet (yellow line). At this point they are in good position, shoulder width apart, which allows him to slide easily in either direction based on the receiver's release. 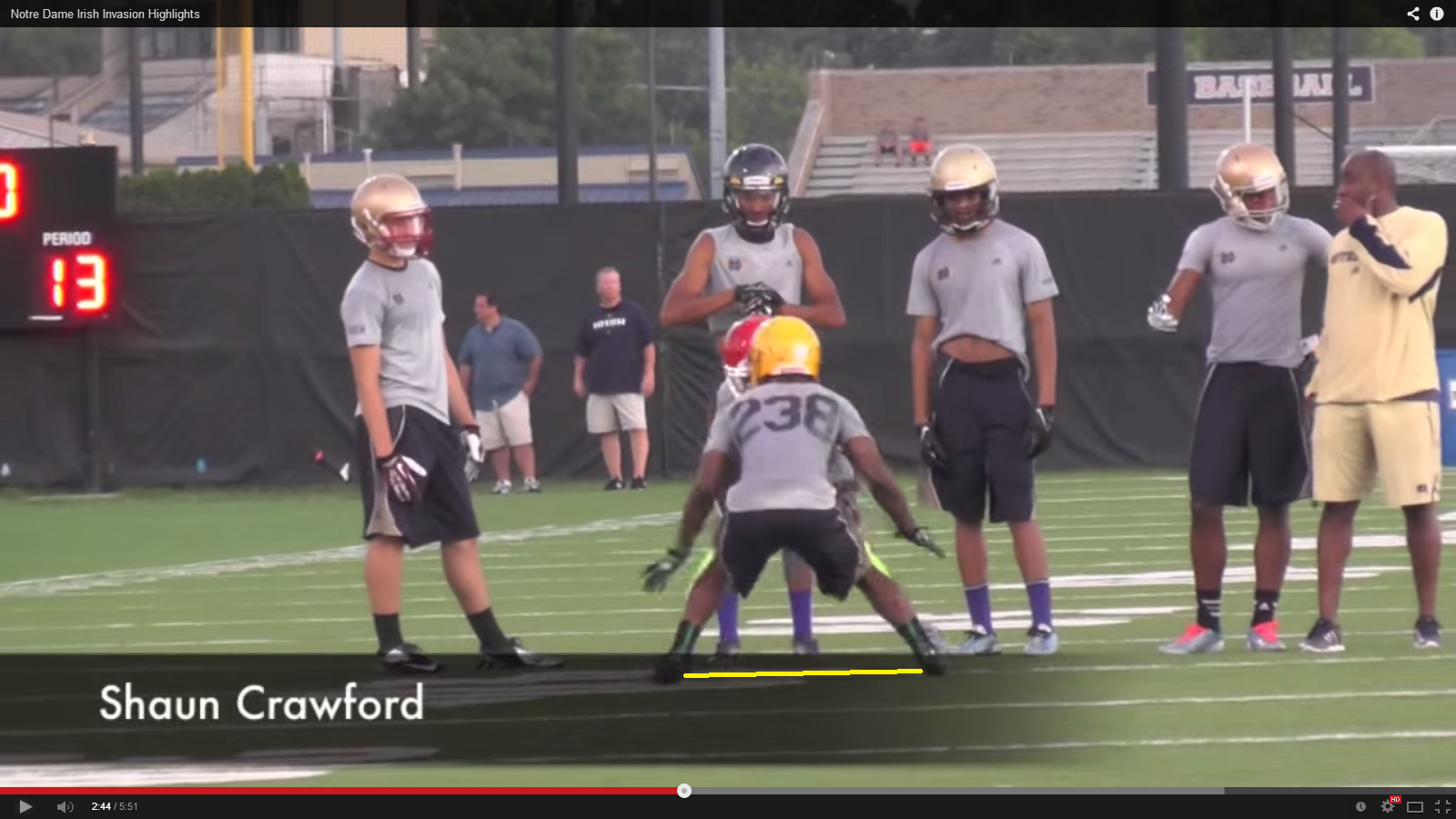 Just after the snap. Crawford has made a technical error. His first action is to move his feet from the previously noted athletic position to a wider stance (yellow line). This wide stance won't help him maintain inside alignment and will slow down his lateral movement. 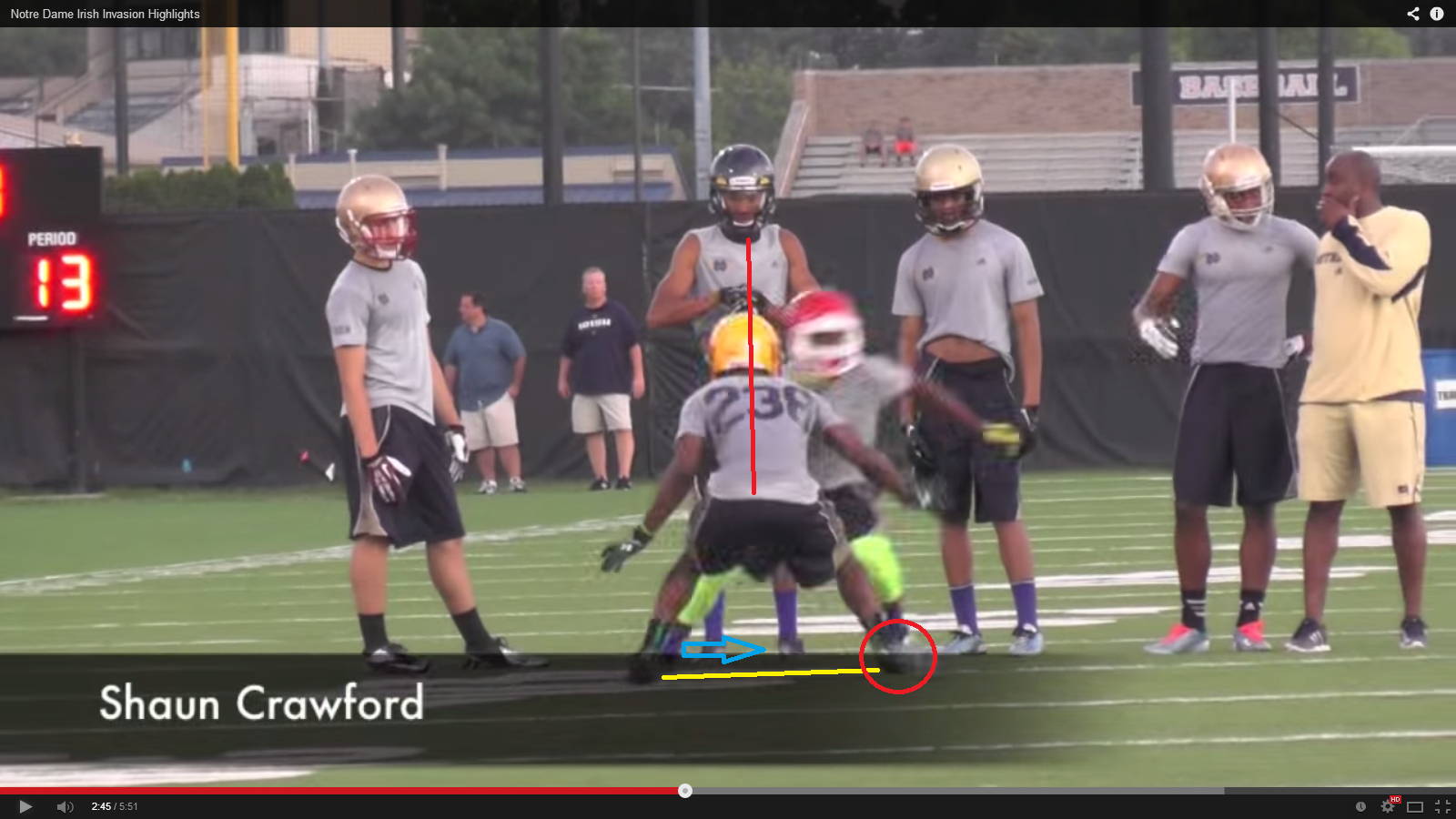 A fraction of a second later. The receiver is making a move to the inside. Crawford should slide his feet and mirror this movement.

Crawford's right foot (red circle) is in decent position. Unfortunately, his left foot doesn't follow suit and stays planted. Both feet should have moved in the direction of the blue arrow. As a result, Crawford's stance gets wider (yellow line) but he doesn't move laterally and therefore loses inside position (red line). 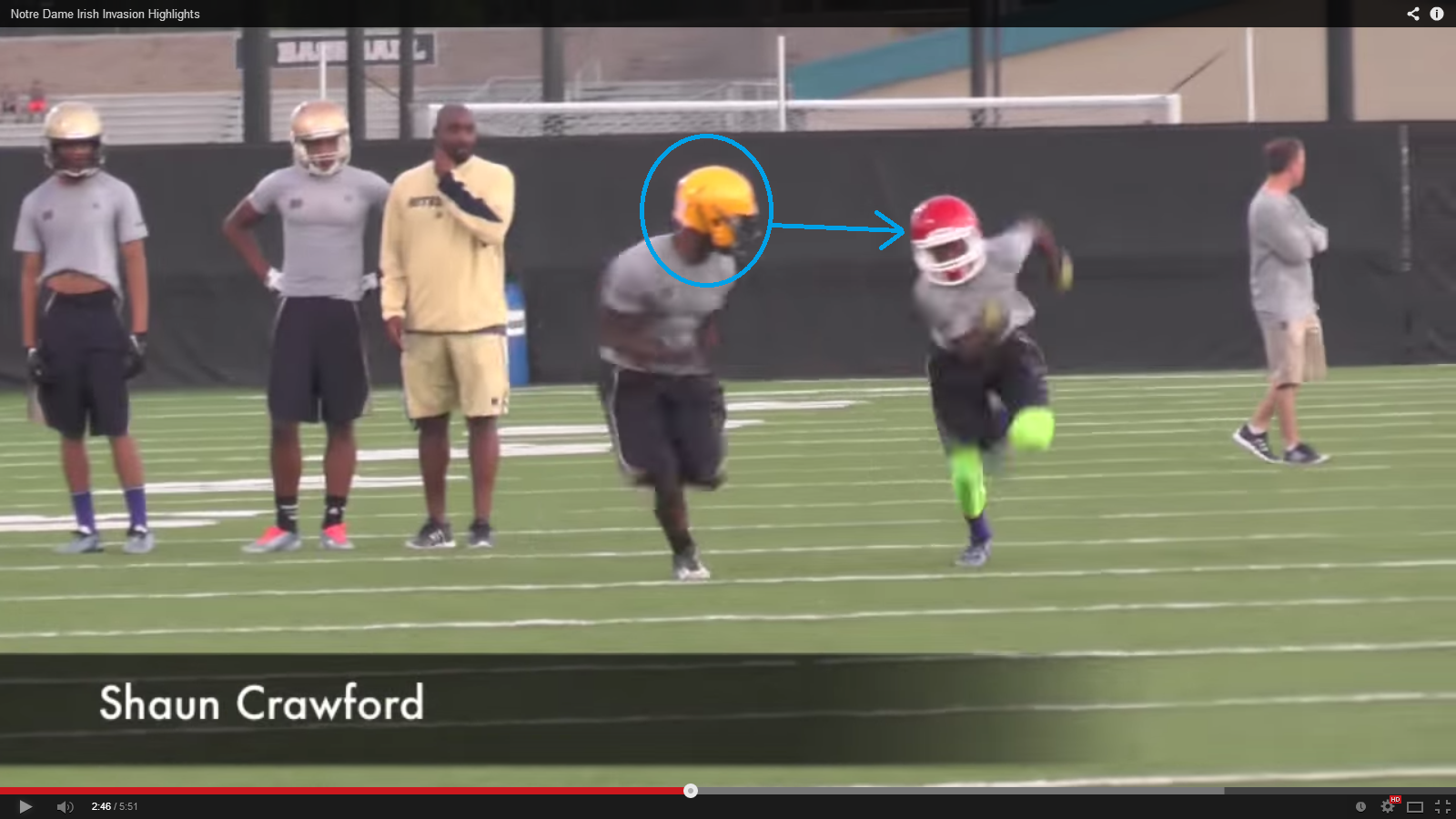 When a defensive player gets beat off the line of scrimmage, they tend to get nervous and look back at the quarterback. This is a cardinal sin in man coverage and usually results in the receiver pulling away from the defensive back.

Crawford doesn't make this mistake. He does a nice job of focusing on his man (blue circle and arrow). People who like football jargon call this eye discipline. 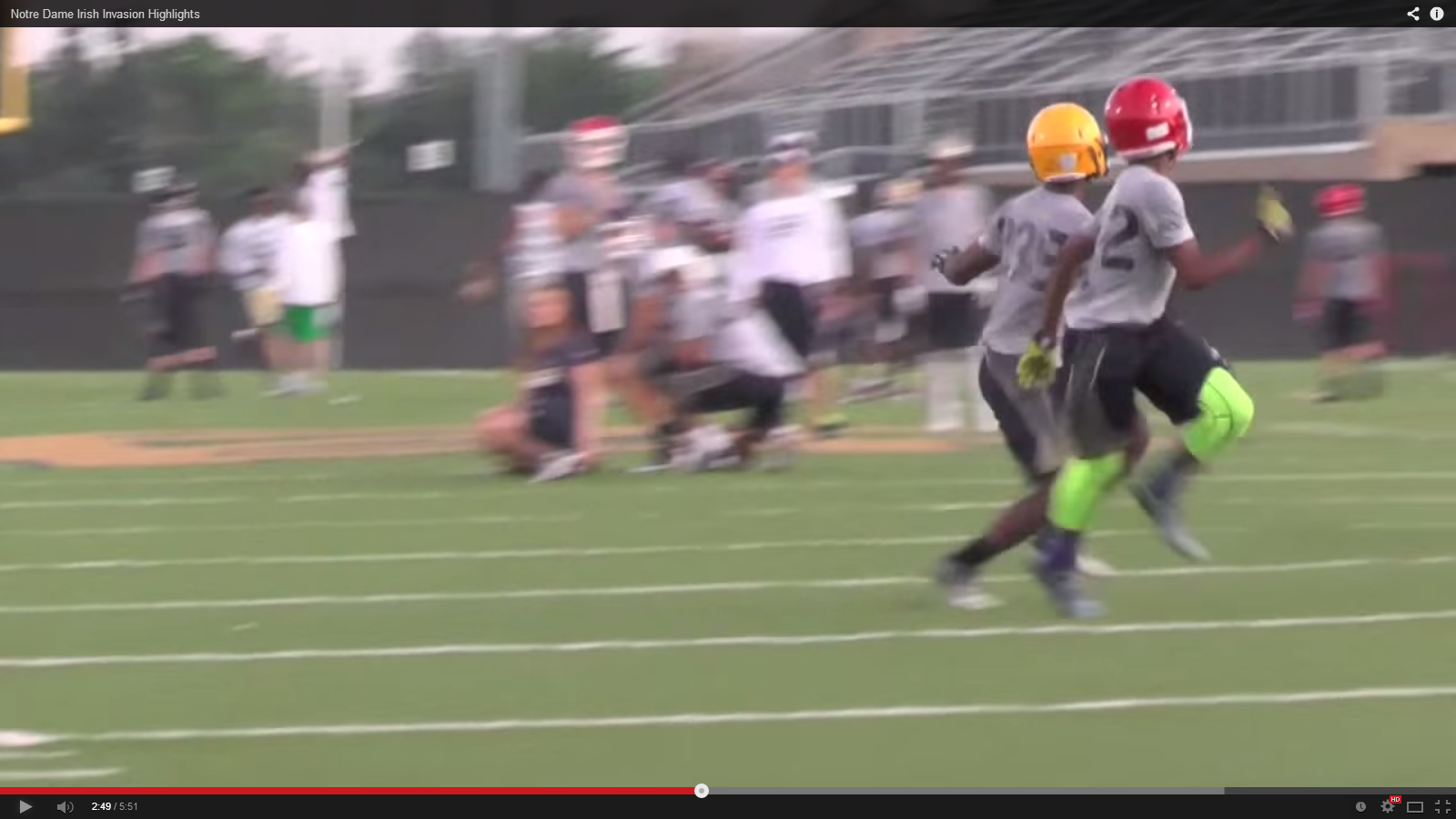 In the last edition of Iso Cam, we looked at Matthias Farley losing inside position in man coverage. One of the things I didn't like about Farley's technique was that he never worked to get back to the inside.

This is not a problem for Shaun Crawford. As the ball is in the air, he does a fabulous job of closing the gap, working to the inside and getting between the ball and the receiver. This is textbook positioning.

Check out the video to see the final result of the play.

Shaun Crawford appears to be a great fit for a scheme that emphasizes man coverage. He's obviously a gifted athlete. However, what stands out to me is his confidence when the ball is in the air. He seems to be able to find an extra gear just before the ball arrives and never gives up on a play.

Like most high school players, there are aspects of the game he needs to work on, but there is no denying his potential. It's going to be fun to see him suit up for the Irish in the coming years.