The Irish have been ending up with three instead of six a lot in the last few years. Miles Boykin can help change that

I don't think the saying that "you only appreciate a good kicker once you don't have one anymore" is true. I very much appreciate the presence of Kyle Brindza on the Notre Dame football team.

He consistently has made big kicks over the past few seasons and I'm sure he will do the same in 2014 as well. It's just, I don't like seeing him as much as I have been the last few years.

Those 50 yarders? Come on down Kyle! But those 27 yarders? Those just remind me of the failure to produce touchdowns and it's happened far too often for the Irish since Brian Kelly took over at Notre Dame.

Notre Dame has not had a player that could dominate one on one match-ups in the red zone since Michael Floyd and he had a freshman and sophomore version of Tommy Rees trying to get him the ball. This year should hopefully be different with Everett Golson returning and either DaVaris Daniels or Corey Robinson emerging as someone who can win in the red zone, but if Notre Dame again struggles, at least they know help is on the way in 2015 with 6'5" Miles Boykin.

The recent commitment is a "big skill" player that uses his body well to shield defenders and can go up and catch the ball.

Here's an example of what I'm talking about and why Boykin has the chance to be a threat in the red zone every time the Irish are in position to score:

Boykin is matched up wide against a corner in man coverage. Not shockingly, the corner is a lot smaller than the 6'5" receiver.

The corner tries to get a jam on Boykin, but Boykin uses his hands to defeat the jam and get back outside where the fade route is coming.

The ball is in the air and Boykin already has the corner beat. As long as the throw is not atrocious, it should be an easy completion. 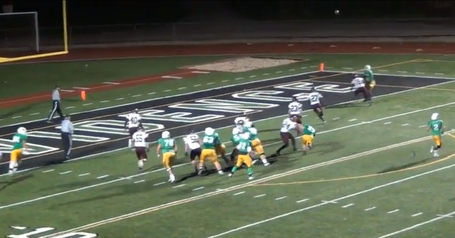 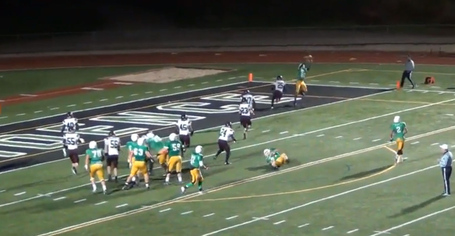 The ball was actually poorly thrown and Boykin had to adjust. He does it without issue and grabs the ball up high for six points.

He won with hands to defeat the jam, his size to get the ball up high, and adjusted to a poorly thrown football. That's about as good as it gets.

But since we took a look at that one, why not go to another red zone play in the same game? 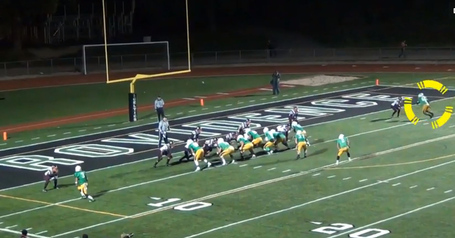 I promise, this is not the same play. It is the same game though and the same play call. Boykin is one on one with this poor corner who is attempting to cover him. 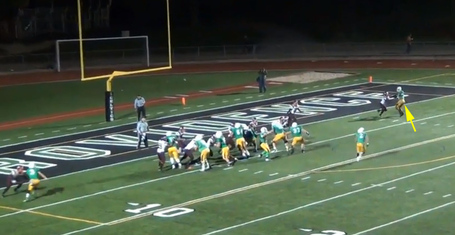 Boykin beats the jam again to get outside and is already in a position to win. 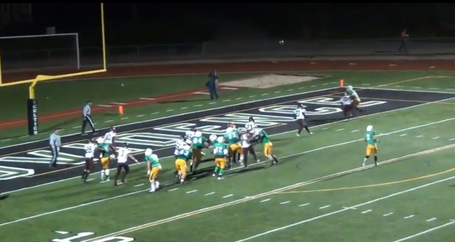 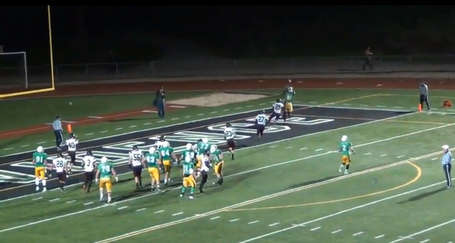 Again, the throw is not perfect and Boykin adjusts to make the catch by going up for it. It was the exact same play call and the corner knew it was coming. He still couldn't do anything to stop it. He never had a chance.

The red zone is a confined area. There is only so much room for the offense to work with and that's why the defense can squeeze down and a team that moved the ball down the field at will can sometimes struggle to complete the drive. All of that becomes a lot easier when you have someone like Boykin that can win on a play like a fade route in the red zone.

Notre Dame really likes Boykin as a receiver and you can see why based on this. He is a physical nightmare for smaller cornerbacks to cover. I'm not so sure Boykin isn't going to grow into a tight end. Even if that happens though, he could be a similar to the type of weapon in the passing game that Tyler Eifert was.

Time will tell where he ultimately ends up and how he physically develops once he gets to Notre Dame. One thing is certain though: Boykin has the ability to be a red zone threat and that is something that is badly needed in Notre Dame's offense.