A BCS title loss, second half collapse in L.A., Miami snaps a school record, and more. 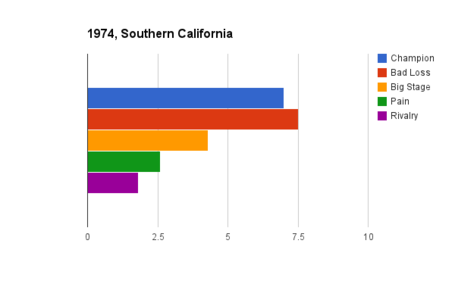 Now known in lore simply as "The Anthony Davis Game" and "The Comeback" our countdown begins the top 10 with what is considered by many to be the greatest game in Los Angeles Coliseum history and one of the greatest moments in city of Los Angeles sports history. Notre Dame came into the game 9-1 and ranked No. 5 in the country. The Trojans were 8-1-1 and ranked No. 6 in the land. Both clubs were looking to remain the hunt for a National Championship and the Irish were seeking back-to-back titles for the first time in over 30 years.

Near the end of the first half it looked like Notre Dame was in prime position to walk out of L.A. with a statement win. Leading 24-0 with a couple minutes left in the second quarter a convincing victory seemed all but inevitable. Then, Anthony Davis went to work.

With 10 seconds left in the half Davis scored on a 7-yard pass from quarterback Pat Haden. USC failed to convert the 2-point conversion and now trailed 24-6 into the break. However, Davis proceeded to take the second half kickoff back for a touchdown. He then added a pair of rushing touchdowns in the third quarter while Haden tossed a pair of touchdowns to J.K. McKay. Early in the fourth quarter Haden found Shelton Diggs for a touchdown and then Charles Phillips picked off Tom Clements and took it to the house for yet another score.

In a complete blitz that we may never see ever again the Trojans poured all 55 points in under 17 minutes of game time. This would be a devastating loss for Irish head coach Ara Parseghian. It was his second worst as ND coach and his last since he retired following the season. However, the Irish did upset No. 2 Alabama in the Orange Bowl to send off Pareseghian in style. Yet, that paved the way for USC to win a National Championship with No. 1 Oklahoma on probation and the Trojans beating Ohio State in the Rose Bowl by a single point. 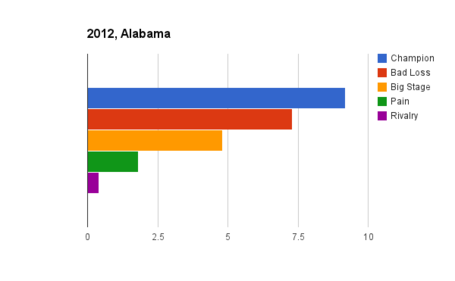 The most recent game on the countdown appears just inside the Top 10. The magical 2012 season culminated in an appearance in the BCS National Championship Game with the Fighting Irish as the No. 1 team in the country, rising to the top spot for the first time since November 20, 1993 following a 38-0 win over Wake Forest on Senior Day. Through an intense season Notre Dame fought and clawed to 12-0 with the chance to win the school's first title in nearly a quarter century.

Standing in the way from Notre Dame being No. 1 on and off the field was the country's most experience big game team in Alabama. It didn't take long for the Crimson Tide to take over the game and grab their third championship in four years.

It took just five plays for Alabama to go 82 yards and score the game's first touchdown. Following a three and out (with a controversial no-catch and overturned fumble recovery on the punt) by Notre Dame the Tide scored again on a 10-play drive. The Irish picked up one first down on their second series but were eventually forced to punt. As the second quarter began Alabama scored again to make it 21-0. By the end of the half it would be 28-0 Tide with Notre Dame establishing very little on offense and looking inept on defense.

The second half began with an Everett Golson interception which Alabama converted into a touchdown to make it 35-0 and officially a blowout. The Irish did score touchdowns on their next two series but they were sandwiched by another Alabama score to get to the game-ending 42-14 score. Such a devastating loss for Notre Dame and a huge missed opportunity to put the Irish back on the map in a lasting way. 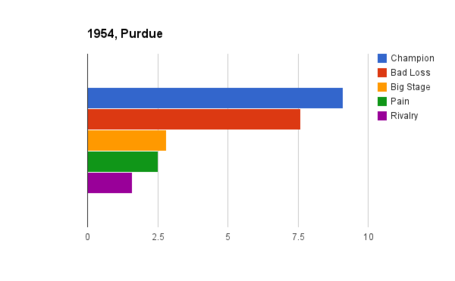 The 1954 season was the first without legendary head coach Frank Leahy who left South Bend with a 87-11-9 record and four National Championships. The concern about losing a great coach seemed to be laid to rest a little bit when the Irish opened the season with a 21-0 defeat over No. 4 Texas.

Now the Irish were the top team in the country and riding high before the Purdue Boilermakers who came to town. Notre Dame had a 3-game winning streak over the Boilers but the team from West Lafayette came in ranked No. 19 in the country after shutting out Missouri 31-0.

Notre Dame fumbled on the first play from scrimmage and from there Purdue would moved the ball to take a 7-0 lead. Following a punt the Boilers mounted another attack--beating the Irish often through the air--and put up another touchdown to lead 14-0. Purdue had a chance to really put the game away in the second quarter but lost a fumble at the Notre Dame 1-yard line. The Irish later picked up a safety and Paul Hornung took the subsequent kickoff to the Purdue goal line while scoring on the next play. After a missed PAT the score was 14-8 which is where the half ended.

Notre Dame came out fired up in the second half and tied the game on their first series but missed another PAT. Not to be out-done, Purdue struck with a 73-yard touchdown pass to 6'7" end Lamar Lundy to regain the lead. For the remainder of the game the Irish offense went cold and Purdue added another touchdown and missed PAT.

This loss would sting for the new coach Terry Brennan. The Irish would go on to finish the season winning 8 straight with wins over four ranked teams, including the opener against Texas, and a final ranking of No. 4 in the country. Purdue would go on to tie Duke the next week and lose to Wisconsin the next while finishing 1954 at a humble 5-3-1. 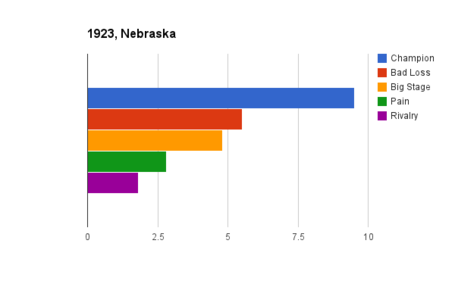 By 1923 the Knute Rockne football machine was humming. His 1920 team finished unbeaten while the 1921 and 1922 editions ended the season with one loss apiece. On November 10, 1923 Rockne's team took the field in Lincoln, Nebraska for the second straight season looking to avenge 1922's only defeat. The Cornhuskers had spoiled Notre Dame's perfect season during the last game of the previous year and once again Notre Dame was unbeaten at 6-0 with a championship within reach. Nebraska, coming off two straight Missouri Valley Championships, struggled out of the gate and were only 1-1-2 to start 1923.

However, a rowdy crowd inspired Nebraska to another upset. The first quarter went nowhere until a shanked Notre Dame punt gave the Huskers the ball near the red zone. From there, they scored the game's first touchdown. Notre Dame answered with a long drive but turned the ball over on downs inside the Nebraska 10-yard line. Later in the game Nebraska returned a fumble 60+ yards and were poised to score a touchdown on the play but "Chippy" Rhodes himself fumbled into the end zone. It wouldn't matter anyway. The Huskers added another touchdown early in the fourth quarter and Notre Dame's rushing attack led by the Four Horsemen was shut down, only scoring a touchdown with under a minute left in the game.

Notre Dame would go on to cruise to victory over the final three games and finish at 9-1 just short of winning Knute Rockne's first championship. 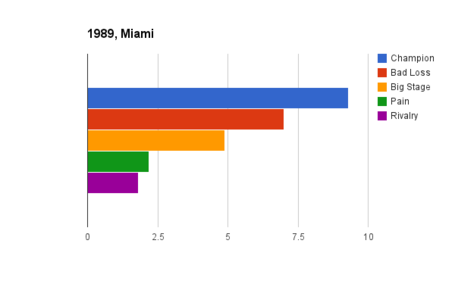 It was most definitely a special time to be a Notre Dame fan In the weeks and months leading up to this game. The Irish were defending National Champions, ranked No. 1 for all but the opening week of the season, and had the confidence to beat Miami after a thrilling victory at home against the Hurricanes in 1988, widely considered the best game in Notre Dame Stadium history. Additionally, the Irish had been inside the Top 5 in the polls for 20 straight weeks.

The Hurricanes were still wildly talented and in the title hunt, as well. They lost to Florida State in late October but dominated their next 3 opponents to get to No. 7 in the country. The game opened with an Irish punt and Miami putting a field goal on the board. Late in the first quarter Miami scored on a 55-yard touchdown to take a 10-0 lead. Notre Dame rallied to Miami's goal line but had to settle for a field goal. As the Hurricanes took over on the next possession Ned Bolcar intercepted Craig Erickson's pass and returned it for a touchdown. With the game now tied the Irish later had the ball in Miami territory but Tony Rice was picked off and the ball was returned deep into ND territory. The Canes scored and led 17-10 at half.

The second half began with what is now called "The Drive." Faced with a 3rd and 44 situation, Erickson threw a prayer down the right sideline to Will Hill for just enough yardage and first down. Miami churned out 12 more plays, scored a touchdown, completely grabbed all the momentum, and never gave it back. Later in the fourth quarter as the Irish tried to crawl back into the game they turned the ball over on downs in Miami territory. The Canes would go on to add a field goal to seal the victory.

Notre Dame's school-record 23-game winning streak was snapped and a chance at back-to-back National Titles gone forever. For their part, Miami would go on to beat Alabama in the Sugar Bowl and be awarded a championship. The Irish would defeat No. 1 Colorado in the Orange Bowl, thus aiding Miami in their title quest.