Hitting the Links: Pick a Number

Another saga is upon us in the college football jersey sale wars.

Share All sharing options for: Hitting the Links: Pick a Number 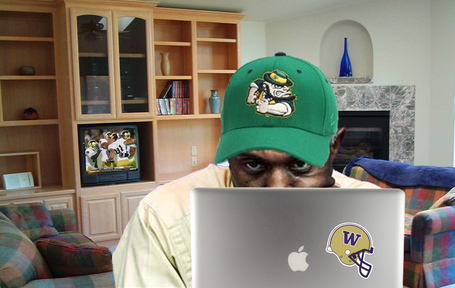 The college football jersey sale wars are continuing. With the impending O'Bannon trial beginning Monday some schools are taking precautionary measures with this matter. As ESPN explains:

The Aggies sold thousands of No. 2 jerseys over the past two years thanks to Johnny Manziel, who wore the number, but sources say the only jersey available at retail this year will be the No. 12 -- as in the "12th Man," a jersey the school has sold for years, alongside other numbers.

Northwestern will limit sales to No. 51, which was used by current head coach Pat Fitzgerald during his heralded playing career. Arizona, meanwhile, will only offer No. 14, as in 2014.

"We've been thinking about doing this for a while," said Arizona athletic director Greg Byrne, who wouldn't elaborate any further.

Officials with Northwestern and Texas A&M declined to comment, but college sports insiders have expected a move like this designed to lessen the legal exposure of the schools and change the public perception of taking advantage of college athletes, as they fight harder for their commercial rights.

I'm sure there will be a last minute rush to scoop up all the remaining "official" No. 2 Johnny Manziel jerseys by Aggie fans. Those suckers are going to be limited editions now. Thanks, NCAA!

It will be interesting to see how much of a black market pops up in the future. I can't imagine fans of the schools with the biggest superstars are going to 2 to 4 years without rocking said players jersey. Even if this restriction on numbers only happens for a few years before the NCAA and participating member schools iron out some sort of agreement to pay players for using their popularity it'll at least lead to some funky budget and DIY jerseys.

The history of manufacturing more players numbers is also worth a quick read:

As shoe companies started doing multimillion-dollar deals with schools in the mid-1990s, the college jersey market matured. Schools would tell licensees like Nike, adidas and Reebok which players they expected to be their stars, and those companies would then produce jerseys with the numbers associated with those players.

It may have been a fine line, but schools and licensees justified doing this by saying that the school, not the player, owned the number, and no official licensee printed the player's name on the back of the jersey.

As the arms race increased and the pressure to make more revenue grew, the shoe companies encouraged schools to give them specific player numbers to sell.

One of the last schools to buckle was the Florida Gators, which had only offered Nos. 1 and 96 -- the year of their first national championship -- up until 2006, when they added Tim Tebow's No. 15, as well as the numbers of two other players. The Gators, however, have since scaled back to 1, 15 and 96.

So, will Notre Dame be proactive in this situation? I'm sure they won't be making any of these any time soon.

Over three years ago we asked our readers which number jersey they would buy if it was to be their last. Not surprisingly, No. 3 ran away with it garnering 31.7% of the votes. The No. 7 and No. 5 came in second and third respectively with 12.2% and 8.5% of the votes.

If Notre Dame reduces their new Under Armour jersey sales to just one number is No. 3 still the safe choice?

The Big Ten is keeping their conference title game in Indianapolis through the 2021 season.

Bo Pelini wants to do away with National Signing Day.

Two FSU players were invesitgated and not dismissed from school stemming from their participation in Jameis Winston's sexual encounter with a woman.

Details on Nick Saban's new contract--which was agreed to 6 months ago--are coming out and he stands to make as much as $55.2 million.

Texas A&M dismissed two players from its team, including a 2013 All-SEC freshman.

Former USC running back Ty Isaac is transferring to Michigan.

The SEC is dishing out record revenue to its members schools.

Starting Rice DT Stuart Mouchantaf will miss the 2014 season with a knee injury.

Arizona and Miss State have scheduled a series. So too, have UCLA and BYU.

NBC: A to Z, Devin Butler

UHND: What to expect from Greg Bryant