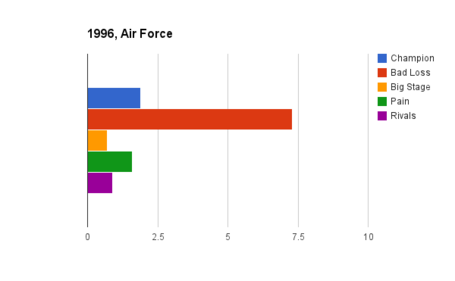 The Lou Holtz farewell tour wasn't supposed to go down like this. There were thoughts of a glorious National Title to send the wiry coach off into the sunset but those dreams were initially dashed in week 4 with a loss to Ohio State. The Irish did rebound with a 54-20 bombing of Washington in South Bend and came into this game against Air Force as the No. 8 team in the country. While the Falcons had put up a fight or two in the past Holtz was 8-0 against AFA unlike his predecessor who struggled so much with the service academy.

The game started in Notre Dame's favor when Allen Rossum took a punt back 57 yards for a touchdown to take a 7-0 lead. However, the Irish ground game completely disappeared on the afternoon gaining just 67 yards for the fewest ever by a Notre Dame team under Lou Holtz. On the other side, Air Force kept moving the ball due to their 304 rushing yards.

Notre Dame could only muster a field goal after Rossum's return and the teams were tied 10-10 heading into halftime. A Marc Edwards rumble from 1-yard out gave Notre Dame the 17-10 lead with 12 minutes left. Air Force rallied and moved the ball down to the Irish 26-yard line where they faced a crucial 4th and 1.

Ultimately, a pitch play to the left sprung running back Tobin Ruff to tie the score. The game went to overtime in the first year of the new NCAA rule allowing games to continue if tied after regulation. Unfortunately, quarterback Ron Powlus fumbled on Notre Dame's first play. Air Force ran the ball 4 straight times and benefited from a facemask call to set up a short game-winning field goal. 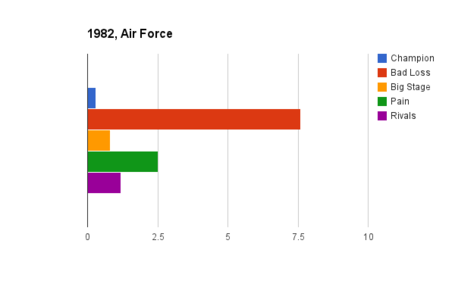 Despite starting the 1982 season with a 6-1-1 record things were very up and down for head coach Gerry Faust. He was 5-6 during his first year in South Bend, lost to Arizona in mid-November (loss No. 62 on the list), soundly beat undefeated and No. 1 Pittsburgh only to fall to No. 5 Penn State in South Bend prior to flying to Colorado. Surely, the Irish wouldn't lose to the Falcons when they were 11-0 all-time in the series and had beaten them by 28 points in 1981?

With quarterback Blair Kiel out with a shoulder  injury and this game sandwiched in between 3 ranked opponents it was ripe for an upset. The Irish offense was completely ineffective and never crossed mid-field in the first half as Air Force led 17-0 at the break. Nothing would go right for Notre Dame as they coughed up the ball 3 times and let the Falcons rush for nearly 300 yards after only giving up an average of 76 rushing yards through the previous 9 games. A completely stunned Irish team trailed 30-10 and only picked up a garbage time touchdown to prevent a 20-point loss.

This was the first ever loss to Air Force and the first to a service academy since 1963. 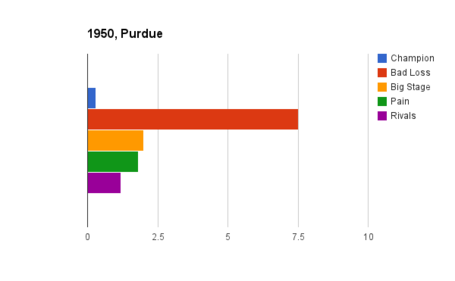 The Fighting Irish of the late 1940's might be the greatest era in school history. Following World War II the Irish won 3 National Titles in 4 seasons under the legendary Frank Leahy and piled up 36 wins over that time span. They rightfully were ranked No. 1 to start the 1950 season and defeated North Carolina in the opener. However, the normally dominant Notre Dame didn't show up in week two.

The offense under quarterback Bob Williams couldn't get anything going and continually gave Purdue great field position. Notre Dame made a goal line stand early on but they were forced to punt from the end zone and couldn't flip field position. Purdue took advantage and led 14-0 in the blink of an eye. At half, the Boilers led 21-0. The Irish came out in the second half an energized group but it was too little too late. The Irish got the game to 21-14 yet a Purdue touchdown drive in the fourth quarter sealed the victory. 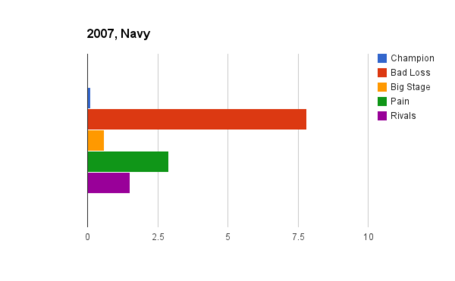 In the Year That Never Happened the Streak finally ended. It took 3 overtimes against a 1-7 team but the Midshipmen finally did it. In a good summary of 2007 the Irish ran for 235 yards, nearly doubling their season total, and still lost the game.

Notre Dame led 21-14 at half but did nothing in the third quarter. The score was 21-20 following a missed Navy field goal. On the ensuing drive Irish quarterback Evan Sharpley fumbled on a sack and Navy scooped, scored, and nailed the 2-point conversion to take a 28-21 lead. Notre Dame then marched 76 yards in 14 plays scoring on a 3-yard Travis Thomas touchdown to tie the game. That would set up an epic ending.

Navy took over but went 3 & out. Notre Dame moved the ball to the Navy 24-yard line and attempted a 4th and 8 that was famously stopped by Flying Ram Vela. With less than a minute left the game ticked down to overtime. In the extra sessions the teams traded touchdowns and then field goals. In the third overtime Navy scored a touchdown on their first play and converted the 2-point conversion. With their backs against the wall Notre Dame mustered a touchdown and were forced to tie the game with a 2-point attempt. Catching a break on a pass interference call the Irish gave the ball to Travis Thomas and he was stopped well short of the goal line.

The 43-game win streak against Navy was over. 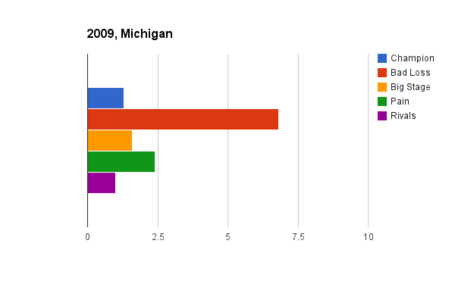 High flying offense, terrible officiating, and a finish for the ages comes in as the 51st worst loss in Notre Dame history. Notre Dame would have no problem moving the ball most of the day finishing with 490 total yards. However, the Irish opened the game with a missed field goal and fell behind early. A 79-yard touchdown drive gave Michigan a 7-0 lead and after Notre Dame countered with a field goal Darryl Stonum took the kick back 94 yards for a score and it was 13-3.

Notre Dame caught fire in the second quarter as quarterback Jimmy Clausen connected on touchdowns to Golden Tate and Michael Floyd, plus Nick Tausch nailed a 42-yard field goal. Michigan did muster a field goal before half to get the score to 20-17 in favor of Notre Dame. The third quarter began with a missed short field goal by the Wolverines only for Jonas Gray to fumble and give the ball right back. Michigan would score a touchdown to take a 24-20 lead. The team's exchanged punts until the fourth quarter when UM quarterback Tate Forcier took a 4th and 3 snap for a 31-yard touchdown and a huge 11-point lead.

The Irish then calmly marched 80 yards on 14 plays to score another touchdown but missed a 2-point conversion. However, the momentum totally turned when Forcier was intercepted by Kyle McCarthy and the Irish scored again and this time converted the 2-point play on a Statue of Liberty play. With a 3-point lead Notre Dame forced a punt and looked to be on their way to victory when Armando Allen ran for 13 yards on first down. However, Allen tweaked his ankle and had to leave the game. A first down run by Robert Hughes was stuffed and Charlie Weis then controversially threw the ball on second and third down--with both balls falling incomplete--allowing Michigan to save their timeouts.

The Wolverines would then go on a 9-play drive that ended with a Forcier touchdown pass to Greg Matthews for the game-winner. Despite 336 passing yards by Clausen--the most by an Irish quarterback against Michigan--and a combined 16 receptions, 246 yards, and 3 touchdowns from Golden Tate and Michael Floyd it was another soul crushing loss for Charlie Weis.