Let's take a sport that needs ice and schedule its championship in June, eh?

As OFD's self-appointed and sometimes-competent Slideypuck Expert, I won't lie to you guys: I love watching the Stanley Cup Finals more than anything (besides Notre Dame football, natch). Sure, I guess it might be entertaining to watch 8-foot behemoths from the Miami Dissipative Thermodynamic Process and the San Antonio Clanking Heel Thingies swat errant shots into the upper deck. But let's be honest--any old 8-foot schmuck could do that. When it comes to hockey, we're talking about viewing a human endeavor that spits in Mother Nature's eyeball and dares her to stop it. At some point in history, a stubborn group of men (probably Canadian) decided, "Ah, screw it--let's take a sport that requires hundreds of feet of ice per game and schedule its championship at the beginning of summer, when God intended large bodies of water to be anything but frozen solid."

Thus we have come at last to this year's edition of the battle for Lord Stanley's Cup, which pits the New York Rangers against the Los Angeles Kings (I'm sure there's a nerdy joke in there somewhere about Rangers from the North and the return of the Kings). Since many of you have expressed little desire to caption hoopyball photos after being subjected to the Pacers twice (my bad), I'm gonna make sure I push a slideypuck photo in there instead. This week, the header photo depicts Rangers goalie Henrik Lundqvist--look, the "v" is actually a "u", so...just roll with it, okay??--celebrating New York's Game 7 victory over the Montreal Canadiens (a.k.a. "The Canadians") in the Eastern Conference Finals. Weird foreign names aside, try your best to decipher what Henrik appears to be bellowing into the rafters. Don't say anything a Swede wouldn't say, folks.

--Oddly enough, there weren't any green'd entries from last week's ND lacrosse TSW, probably due to the post-championship malaise COMPLETELY MYSTERIOUS REASONS. However, as evidenced by the poll below, there were some lively discussions about other sports that are off the beaten path, so to speak. Care to give us a cricket lesson, ConcreteCharliee?

--Since things were moving a bit slowly last week, kudos to windyirish for taking some initiative and submitting a photo of his own. I'll say this right now: since summer is so incredibly slow, PLEASE feel free to do things like this if you find a good entry or want to (tastefully) liven things up a bit. After all, this weekly thing is supposed to be for all you guys, not just a few people, so fire away! 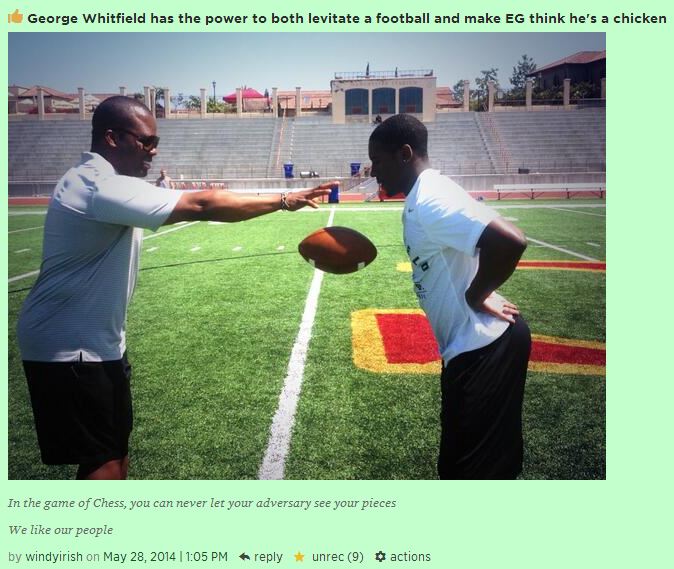 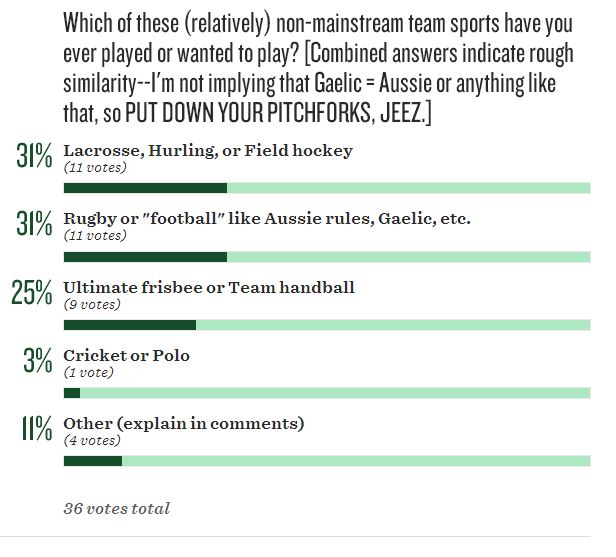 Once again, we got some pretty balanced results in the poll, which led to some good banter about the different pastimes you knuckleheads have engaged in. If you think of something else, pop into this week's comments and keep that discussion rolling!