No revenge against BC, the Miracle in South Bend, Under the Lights I, and more. 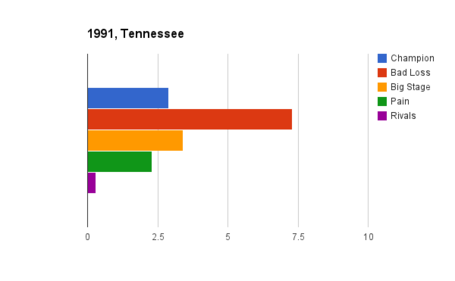 A pair of Notre Dame-Tennessee battles in the early 90's were both very underrated and entertaining games from the Lou Holtz era. In 1990, the No. 1 Fighting Irish invaded Neyland Stadium and escaped with a win over the 9th ranked Volunteers. The following year Tennessee made the trip to Notre Dame Stadium as the 13th ranked team in the country. The Irish were No. 5 in the country sitting at 8-1 with an early season loss to Michigan in a top 10 matchup.

Things got out of hand early and it appeared as though Notre Dame would blow Tennessee right off the field. The Vols fumbled an early punt which the Irish turned into a touchdown. Following a 62-yard kick return by Tennessee it was defensive back Tom Carter who intercepted a pass and took it for a score. Before the first quarter was up Notre Dame put together a 94-yard touchdown drive and led 21-0. The Vols countered with a touchdown drive but the Irish answered with a field goal drive followed by a forced fumble and another touchdown.

While leading 31-7 with a few seconds left in the first half Notre Dame lined up for a short field goal to put the game away as much as a team could before the break. However, Craig Hentrich's kick was blocked and Tennessee took it back 85 yards for a touchdown. Hentrich would tweak his leg on the play, as well.

In the third quarter Tennessee opened the scoring with a touchdown but Hentrich (limping) was able to kick another field goal to put the lead at 34-21. A bad punt later in the game and 2 penalties gave Tennessee a short field to add another touchdown. Time was running out when the Vols failed to convert a 4th and 9 from the Notre Dame 25. The Irish could bleed the clock but Rick Mirer threw an interception and Tennessee scored yet another touchdown to take an improbable 35-34 lead.

Notre Dame actually moved the ball and attempted a game-winning 27-yard field goal. But it was without Hentrich whose leg finally gave out and it was up to walk-on Rob Leonard to attempt the game saver. The kick was blocked and the Volunteers finished off the upset. This is the only time Notre Dame lost at home after leading 21-0 in the first quarter. The SBN site Rocky Top Talk named this game the biggest Tennessee comeback since 1990. 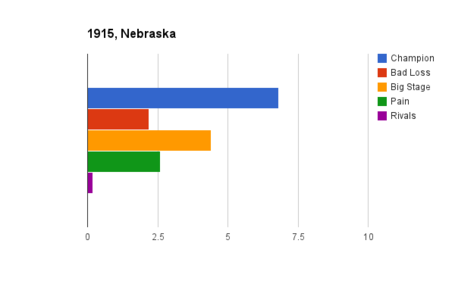 It was Notre Dame head coach Jesse Harper's third year on the job and he continued to struggle finding top opponents to fill the schedule. There was the epic upset of Army two years prior that shocked the nation, but Yale and Army were the only big schools on the 1914 slate and Notre Dame lost both games handily.

Enter the Nebraska football program and their 34-3-3 record since the 1910 season, 5 straight Missouri Valley Championships, and unbeaten streak going strong at 24 games. The Cornhuskers agreed to host Notre Dame in the first ever matchup between the two schools.

Notre Dame had two weeks to prepare for Nebraska and the young assistant coach Knute Rockne pressed the team hard in scrimmages with the freshmen squad. The accounts of the game had Notre Dame severely outplaying their opponent but being victims of several penalties, particularly on big gains. Notre Dame led 13-6 at half but Nebraska's passing game scored twice in the second half to escape with a razor thin 1-point victory.

This was the lone defeat for Notre Dame during the 1915 season. With big wins over Army and Texas later in the season a victory against Nebraska might have brought Notre Dame its first National Championship. 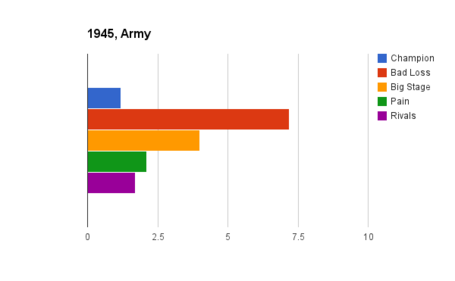 Notre Dame had an immensely talented roster in the early 1940's but many of the top players along with their head coach were away serving in World War II. Notre Dame's loss would be the military academies gain as their rosters were loaded with talent during the war. For example, the Irish lost to Army and Great Lakes NTC while tying Navy in 1945 but won the rest of the games by a combined score of 242-29.

Notre Dame, bruised and battered following that tie with Navy the week prior, had no chance against the machine that was Army. Led by eventual Heisman winner Doc Blanchard the Cadets embarassed Notre Dame for the second straight season inside Yankee Stadium.

To this day the 1945 defeat by Army remains the 5th worst in Notre Dame history. 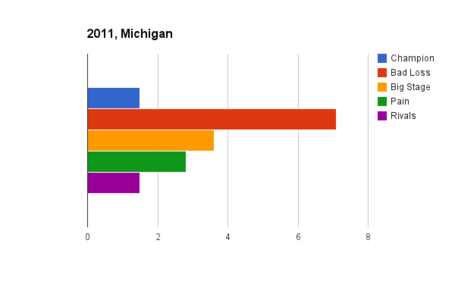 The 2011 season didn't start out too well. The loss to USF in the opener (#56 on the list) combined with this loss to Michigan is the only season in which the program started out with two Top 75 losses.

It was the first prime-time game in Michigan Stadium history and Notre Dame shot out of the gates in dominating fashion. The first quarter couldn't have been scripted any better for the Irish: 2 punts by Michigan, 2 touchdowns by Notre Dame, and the last play was a Denard Robinson interception. The team's traded punts in the second quarter before Tommy Rees threw his own interception. Taking advantage, Robinson hit Junior Hemingway for a 43-yard score to cut the lead in half. The Irish began another long drive but that too ended on another Rees interception. Notre Dame's defense held and the offense picked up a field goal before half to lead 17-7.

Through two quarters Notre Dame had outgained Michigan 251 to 85.

The second half got crazy. On the third series Jonas Gray rumbled 38 yards near Michigan's redzone but Cierre Wood fumbled on the next play. The Irish bounced back with another interception and took 7 plays to score a touchdown. With 2:14 left in the third quarter Notre Dame led 24-7 on the scoreboard and 398-141 in total yardage. Then the fourth quarter of death came.

Robinson hit Hemingway for 77 yards on first down. Two plays later Michigan fumbled at the 1-yard line but Robinson scooped the ball and scored. Notre Dame went three and out and punter Ben Turk shanked the ball. Just 5 plays later Michigan had scored again. The Irish then marched to the Michigan 7-yard line where Rees promptly fumbled the ball attempting a pass. Michigan had the momentum back but Robert Blanton picked off Robinson three plays later. Another three and out for the Irish and Michigan scored a touchdown to take their first lead. With 1:12 left Notre Dame marched 5 plays for a would-be touchdown to re-take the lead. Unfortunately, a 64-yard completion set up the game-winning touchdown pass by Robinson.

After struggling nearly all game Michigan piled up 322 yards over their last 5 possessions in just 20 snaps. Denard Robinson finished with just 11 completions for a ridiculous 338 yards. The 24-7 blown lead by Notre Dame was one of the worst in school history. 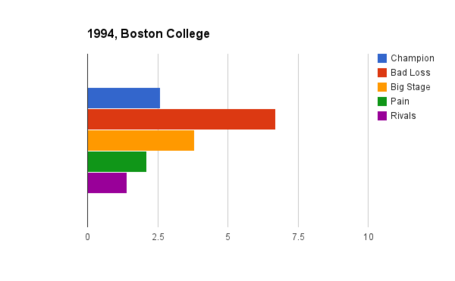 The revenge game. Notre Dame started out No. 3 in the country to begin 1994 but fell to No. 6 Michigan in week two. Three wins later the Irish were back in the top 10 looking to dish out some payback to Boston College for ruining the perfect '93 regular season.

Notre Dame caused a fumbled on BC's first series and quickly took a 3-0 lead. The Eagles successfully attemped a fake field goal on a drive which led to a touchdown and 7-3 lead. That's the way the first half ended.

Boston College opened up the second half with touchdowns on their first two series while Notre Dame's offense disappeared and went three and out. The Eagles added a field goal early in the 4th quarter to take a commanding 24-3 lead. Each team would add touchdowns in the fourth quarter but the game never was close. Despite each club only converting 2 third downs it was the Eagles who gained 140 more yards and won the game.

There would be no revenge. This loss was the worst tasted by Notre Dame since the 1991 season against Penn State.