OFD Film Room: What Kind of Player is Notre Dame Getting in Micah Dew-Treadway?

Treadway is far from a finished product, but has some advanced skills to help him progress at the next level

Share All sharing options for: OFD Film Room: What Kind of Player is Notre Dame Getting in Micah Dew-Treadway?

The easy answer to the title of this post is to say that Notre Dame took a commitment from a player who is very raw and needs a lot of work to be able to compete at the next level.

I realize that answer does not sound exciting for Notre Dame fans who are pining for players that can make an instant impact as soon as they arrive on campus. But none of that changes the upside that defensive tackle Micah Dew-Treadway possesses.

That's not to suggest that Dew-Treadway is only a player with an upside. There are some things he does really well now that even some defensive lineman in this class that are considered elite don't do.

Most players his height have a huge problem with pad level and that is not the case with Dew-Treadway. He plays with really good leverage. Most defensive lineman his age do not even attempt any pass rush moves. He shows active hands and does not simply try to bull rush offensive lineman.

The most encouraging thing I saw from Dew-Treadway though is his feel for the position. He feels pressure, and when there is not pressure, and is able to read off of how an offensive lineman is trying to block him. I played and coached defensive line at the college level, and you would not believe how many players are unable to read and react off of what kind of block an offensive lineman is showing them. It's a skill that he has already begun to develop.

Here is one example of it from his junior season: 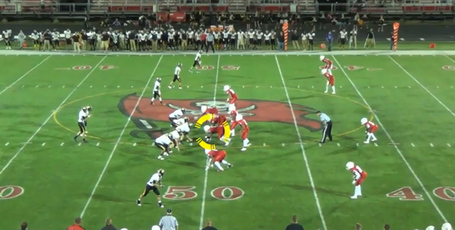 Dew-Treadway is lined up as an interior defensive lineman and is about to be blocked one on one by the center. 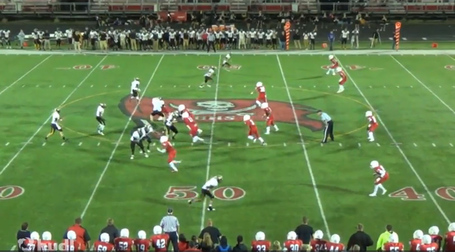 He doesn't get the initial push you would like to see, but he has created separation with his long arms. That's always a good thing as a pass rusher. In order to combat what Dew-Treadway is doing, the center is trying to lean forward and stop the upfield pressure.

Dew-Treadway feels that pressure and does a nice little push-pull move. He essentially used the center's pressure to pull him forward after he was already pushing on him. Dew-Treadway was able to disengage and continue upfield to the quarterback.

Dew-Treadway does not get to the quarterback in time for a sack, but he is able to at least try and disrupt the pass by getting his hands up in the throwing lane.

I chose this specific play for a couple of reasons. The first was to show Dew-Treadway execute a technique that is advanced for most defensive lineman in high school. The second was because I wanted to show how much Dew-Treadway needs to improve as well. He executed that technique, but he ultimately did not get to the quarterback and finish the play.

Right now, Dew-Treadway is not that explosive off the ball and isn't that strong despite his size. If he exploded off the ball and blew up the center's right shoulder instead of attacking the full-man, he would have been further upfield and the push-pull likely would have resulted in a sack or at the very least a hit on the quarterback.

Can you imagine a player who already understands how to execute something like that, but also is physically dominant enough to penetrate further into the backfield? That is the kind of player Dew-Treadway has the chance to become.

It is not going to be easy for him and it will take some time for Dew-Treadway to get there. He needs to work hard in Notre Dame's strength and conditioning program as well as before he gets on campus. He needs to continue to mature and get some grown-man strength that only comes with physical maturation.

It's going to help him a lot if it's true that he will be able to enroll early at Notre Dame. That just means some extra time with Paul Longo which will help him get where he needs to be.

He is not going to walk into Notre Dame stadium and light the world on fire, but he has the chance to develop into a good defensive lineman for the Irish if he puts in the work the way he should.