Two brutal shutouts, the Meadowlands Massacre, and The Clip. 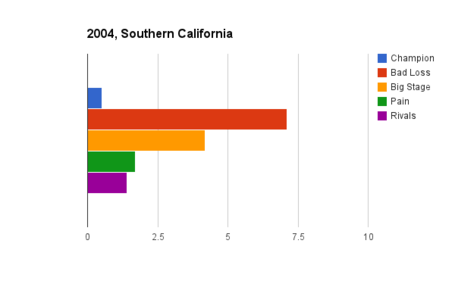 This was the last game coached by Tyrone Willingham at Notre Dame. The Irish had already lost the previous two meetings to USC by 31 points in each contest and they would do it yet again in 2004.

USC came in 9-0 and the No. 1 team in the country. The Irish actually came out on fire taking a 10-3 lead and racking up 165 yards on their first two offensive series. After that the game turned into a complete debacle. Trojan quarterback Matt Leinart tossed 2 touchdowns late in the second quarter to take the lead and wasn't finished once the second half kicked off. Following a field goal by USC, it was Leinart tossing three more touchdowns (tying the school record) while also throwing for a career high 400 yards and practically sealing his Heisman trophy bid.

Notre Dame was shutout and only gained 135 yards after the first two scoring series. USC won its school-record 21st straight home game and would go on to win the National Championship. 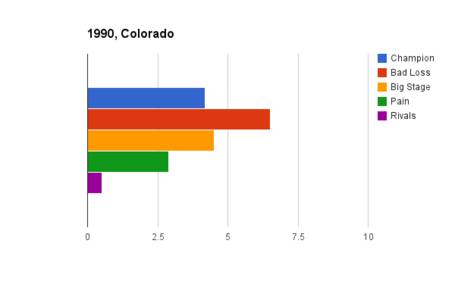 Notre Dame finished the 1989 season with a win over Colorado in the Orange Bowl and the two teams would meet again in the same bowl following the 1990 regular season. The previous season the Buffaloes were ranked No. 1 in the country and the Irish spoiled their National Championship. Once again, Colorado came into the post-season as the top team in the land but a controversial penalty at the end of the game would spoil Notre Dame's upset bid.

Besides the infamous punt return near the end of the game it was turnovers that did in the Irish. Quarterback Rick Mirer struggled going 13 for 31 with 3 interceptions while the team turned it over 5 times in total, including on three straight possessions in the third quarter.

One of those turnovers in the third quarter led to Colorado's lone touchdown of the game and since Notre Dame's PAT was blocked in the second quarter the Buffaloes led 10-9 when their quarterback was sacked twice in a row with under 2 minutes left in the game. The CU punter got off a booming kick and Rocket Ismail caught it at his own 9-yard line before weaving all the way down the field for one of the most famous called back touchdowns in college history.

Senior Greg Davis was called for clipping on a play that will forever live in infamy for Irish fans. With the ball moving back on the penalty Notre Dame couldn't get any offense going and Mirer threw his final interception to seal the loss. Colorado with a 11-1-1 record would be awarded the National Championship while Rocket Ismail would leave school early for a big contract in the CFL. 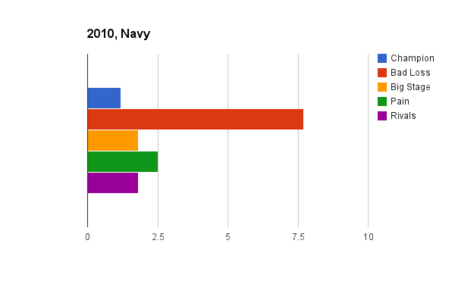 The first season of the Brian Kelly got off to a 1-3 start but the Irish rallied to win 3 straight before meeting Navy in New Jersey in late October. The Middies came in at 4-2 with losses to Maryland and Air Force.

Notre Dame drove right down the field to open the game but failed on a quarterback sneak from the 1-yard line on fourth down. That's when the Navy blitzkrieg began. Five rushes moved the ball inside the Irish 40 before a 31-yard touchdown reception by fullback Alexander Teich gave the Middies a lead they would never relinquish.

Notre Dame did notch a field goal on their second series but Navy answered with another long touchdown drive to lead 14-3. The Irish stayed in it with a touchdown drive of their own and finally forced a punt by Navy. Unfortunately, a third down pass by Dayne Crist was picked off and Navy rolled the 30 yards for another score to take a 21-10 lead into halftime.

The Middies continued carving up the Irish defense to start the third quarter with a 77-yard touchdown drive to take complete command of the game. Another Crist interception led to a 10-play touchdown drive and a brutal 35-10 lead. The rest of the game was a mere formality. Eventually, Tommy Rees came in to lead a touchdown drive but the Midshipmen cruised. This loss is the 4th worst ever suffered by Notre Dame at the hands of Navy and the first back-to-back losses to the Middies since 1960-61. 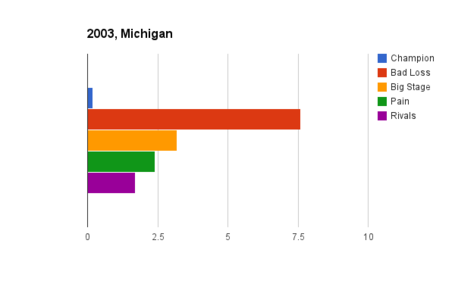 Notre Dame opened 2003 with an overtime win over a tough Washington State squad while Michigan defeated Central Michigan and Houston by a combined score of 95-10. The Wolverines fumbled on their opening series yet from that point forward they wouldn't encounter many problems. A NCAA record crowd of 111,726 was about to witness one of the worst performances by Notre Dame in a game against Michigan.

Following the UM fumble the Irish got the ball at the 39-yard line but punted from the Michigan 38. A couple of series later a Steve Breaston 55-yard punt return set up a short Chris Perry touchdown. Michigan tacked on a field goal early in the second and quarterback John Navarre hit Perry for a 4-yard touchdown. Perry would later fumble inside the Notre Dame 10-yard line but the Irish couldn't take advantage while the offense continually sputtered.

The second half started with Notre Dame being pinned in at their own end and only punting to their 35. Two plays later and Perry scored again. Michigan later got the ball back at 8:51 in the third quarter and Perry scored yet again at the 13:26 mark of the fourth quarter. The 19-play drive was the longest in school history for Michigan.

At the end of the game the 38-0 margin was the worst defeat in the history of this series. Notre Dame finished with just 140 total yards and never moved the ball inside the Wolverine 35-yard line. 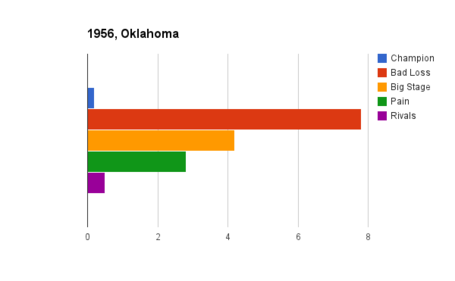 Oklahoma football in the 1950's was a machine. Leading up to this game the Sooners had won 34 straight games and were 60-5-2 since the beginning of the 1950 season. Notre Dame had played a home and home with Oklahoma earlier in the decade and Frank Leahy's teams barely scraped past the Sooners in each contest. In fact, the win by the Irish in 1953 was the last time Oklahoma had tasted defeat.

Now, the Sooners were back and it didn't look good for Notre Dame. The Irish were already floundering a 1-3 on the season and badly needing a win over the No. 2 ranked Sooners.

Oklahoma wasted no time scoring on their first drive. Notre Dame, led by Paul Hornung, drove down deep into Oklahoma territory but couldn't convert on fourth and three. Later in the quarter a botched punt set up an easy score for OU. Before the first half was up the Sooner offense, which was averaging over 45 points per game on the season, added a couple more touchdowns and lead 26-0 into the break.

The Irish had a nice drive going to start the second half but a Hornung interception gave the ball back to Oklahoma and the Sooners promptly scored another touchdown. Early in the fourth quarter Hornung threw a pick six to add to the mounting deficit. When it was all over Notre Dame was shutout for the first time in 47 games. To this day this game remains the worst home loss in Notre Dame football history.