OFD Film Room: What Kind of Player is Notre Dame Getting in Brandon Tiassum?

Share All sharing options for: OFD Film Room: What Kind of Player is Notre Dame Getting in Brandon Tiassum?

Even though Brandon Tiassum committed to play for the Irish only ten days ago, it seems like it's been a lot longer.

The commitments have been coming fast and furious in June and could continue over the next few weeks with the Irish Invasion camp this weekend and some of the top players on Notre Dame's board getting ready to choose a school in early July. With four commitments after Tiassum and Josh Barajas committing right before him, it would be easy for his addition to the class to get lost in the shuffle.

And if you consider that Tiassum was the first of four 3 star commitments sandwiched between the 4 star commitments of Barajas and Shaun Crawford, you can see why he hasn't generated a ton of excitement from ND nation.

He's likely going to take some time to develop at Notre Dame, but there is plenty of reason to be excited about his future impact as a defensive lineman. There are things he needs to improve on to develop into a starter at the next level (I go into further detail here), but his explosiveness off the ball is something that some players never develop and can make him a potentially disruptive presence in the opposition's backfield.

The play I am going to show you below is a perfect example of why defensive line coach Mike Elston has to be pumped about Tiassum signing in February 2015: 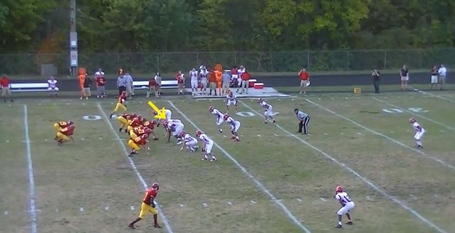 Tiassum is lined up as a three technique on the outside shade of the right guard. 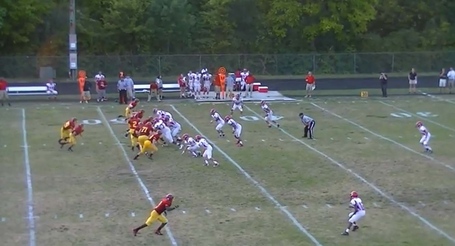 Tiassum explodes up the field with his first step. Look at where Tiassum is compared with the other defensive lineman on his team! He is practically in the backfield and they are just getting out of their stance.

The right guard that Tiassum was lined up on is trying to pull and it's the job of the right tackle (#71) to block down on Tiassum. 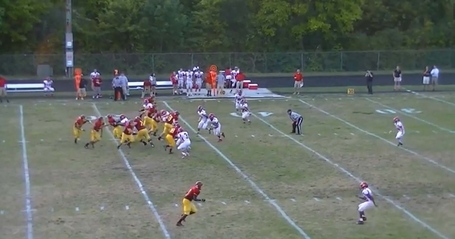 As you can see, that down block didn't go so well. Tiassum is already in the backfield and about to get to quarterback before he even has the chance to hand the ball to the running back. 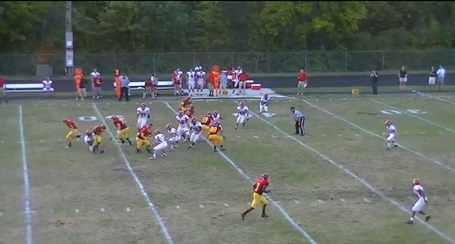 Tiassum arrives at the same time the ball does and causes a bad exchange between the quarterback and the running back that results in a fumble. It doesn't get much more disruptive than that! 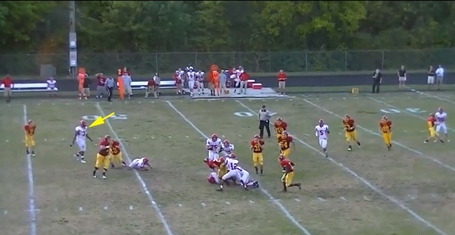 That's Tiassum standing there admiring his work. His job is done on the play. He forced a fumble and now his teammates are recovering it.

It's a sudden change for the offense and now they get to go out on the field with a short field to work with and try and score.

This is the kind of play Irish fans hope to see from Sheldon Day this season in his role as a three technique. This is a rare play at any level of football and Tiassum showed he is capable of making it happen.

That's why the Irish coaches didn't wait to offer him until after they saw him at camp. They know he will enter into the strength and conditioning program and have Paul Longo work to re-shape Tiassum's body and they have seen Longo do it with other players before. They have seen Mike Elston work with defensive linemen in the past who played with high pad level and know he can work with them to correct it.

They see the potential in Tiassum and they think they can develop him into the kind of one-gap penetrator Brian VanGorder is looking for along the defensive line.

As I mentioned before, it's going to take time for Tiassum to improve and develop the way they want him to. But I'm guessing they watched Tiassum's first step again and again, and that was enough to convince them that he can one day be a significant contributor for the Irish.