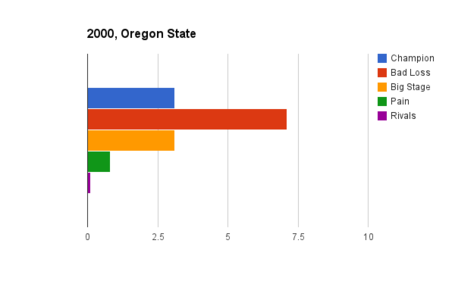 The 2001 Fiesta Bowl was a study in contrasts. On one side was the Cinderella program having one of its best seasons ever. On the other was the traditional power trying to reclaim some of its glory. Oregon State, behind the rushing of Ken Simonton and receiving of Chad Johnson and T.J. Houshmandzadeh, brought a dangerous offense and a 10-1 record behind their shared Pac-10 title.

The scoreboard didn't get out of hand in the first half but this loss could lay claim to one of the ugliest in school history.  Notre Dame rode a solid defense and an offense that didn't turn the ball over and got neither of those things against the Beavers.

The score was 12-3 at half but that was thanks to a majority of Oregon State's 18 penalties for 174 yards ocurring early and keeping things closer than they appeared. When the second half began it all fell apart for the Irish. Quarterback Matt LoVecchio fumbled on the first series after being blinsided by a sack. A punt on the next series was fumbled by Houshmanzadeh but picked up by teammate Terrell Roberts for a touchdown. LoVecchio then threw an interception on the next drive. Before the third quarter was finished the Beavers tacked on another touchdown to lead 41-3.

Only a late 4th quarter touchdown run by the Irish prevented this from being the worst bowl loss in school history. Oregon State scored 29 points in the third quarter, their quarterback Jonathan Smith threw for 305 yards and 3 touchdowns without playing in the 4th quarter, and Notre Dame was out-gained by 291 yards. A team that had tied the NCAA record during the regular season for fewest turnovers would cough up the ball 5 times and allow LoVecchio to get sacked 6 times. 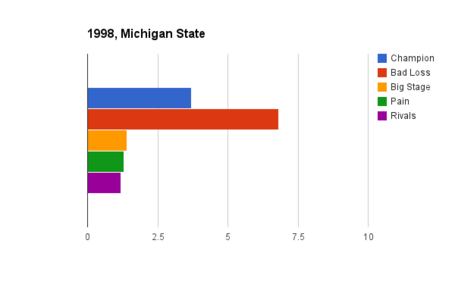 Our 39th worst loss is an example of experiencing the highest high and the lowest low. Notre Dame opened the 1998 campaign by upsetting the No. 5 Michigan Wolverines coming off their shared National Championship the year before. The Irish looked really good at home winning by 16 points. As soon as the ball was kicked off against Michigan State the dream of a great season died.

Led by 4th-year head coach Nick Saban the Spartans hosted just their second night game ever and poured it on in the first half. MSU blocked a punt on Notre Dame's first series and returned it for a touchdown. From there State scored 5 more touchdowns before the break.

At halftime the Spartan crowd was in a frenzy and the Irish were completely stunned. A 42-3 lead with 2 quarters to play didn't even seem like a reality for a team that had played so well in week one. Luckily for Notre Dame the dogs were called off in the second half and the Spartans only scored 3 more points. Still, this was the worst loss in 7 years for the program. This also remains the worst loss to Michigan State in over 50 years. 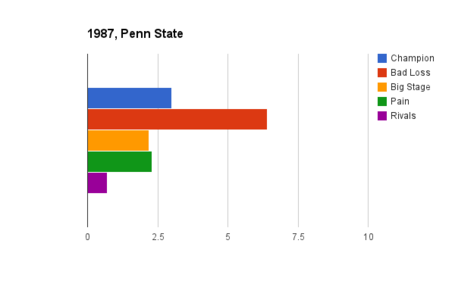 Up until Notre Dame's late season visit to Happy Valley things had been doing swimmingly in the second year of the Lou Holtz era. The team had fallen to Pittsburgh on the road but otherwise won every other game while standing at 8-1 prior to meeting Penn State. There was still talk of an outside shot at a title and the Cotton Bowl representatives were in town eager to give Notre Dame its first New Year's invite in 7 years.

This game was cold. The wind chill factor was below zero and periodic snow showers fluttered inside Beaver Stadium. Forced to rely on the ground game it was Penn State that won the battle as tailback Blair Thomas totaled 214 yards on his own. The weather also kept eventual Heisman-winner Tim Brown in check as well, limiting the Irish playmaker to just 107 all-purpose yards.

Notre Dame did intercept Penn State's first play from scrimmage but a muffed punt a couple series later gave the Nittany Lions great field position and a 7-0 lead. The Irish answered and scored their own touchdown on just 2 plays. A couple of bad penalties aided the next PSU drive to give them a 14-7 lead. A shanked punt by Penn State set up Notre Dame perfectly but Lou Holtz curiously subbed out quarterback Tony Rice for Kent Graham to execute a pass near the goal line. It was picked off and Notre Dame went into halftime down by 7 points.

Penn State fumbled in Notre Dame territory to start the second half and the Irish responded by tying the game. The game went into a stalemate until the middle of the fourth quarter when Penn State scored a touchdown to go up 21-14. Following an exchange of punts the Irish took over with under 5 minutes left and engineered a gutsy touchdown drive that took the gameclock down to 31 seconds left. Do you kick for the tie or go for the two points? With a possible title on the line Holtz & Co. never thought about kicking.

Tony Rice rolled to his right on the snap but was corralled at the 5-yard line before he could make a play. Notre Dame lost in heart breaking fashion, saw their national title hopes evaporate, but were still invited to the Cotton Bowl after the game anyway. 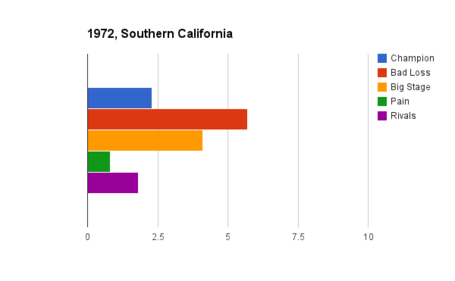 When Notre Dame traveled to Los Angeles to finish the 1972 regular season they were looking to play spoiler. Sure, the Irish had very slim chances at a National Championship with an 8-1 record but it was No. 1 USC at 10-0 that was in line for a title. The Trojans were unbeaten over their last 15 games and hadn't lost to Notre Dame since 1966. Would the Irish finally break through and end the streak in '72?

USC's turbo runner Anthony Davis would make sure there would be no upset. He took the opening kickoff to the house, and after ND responded with a field goal Davis scored a rushing touchdown. The Irish fumbled on the next series and Davis again scored. Irish quarterback Tom Clements led the offense back and narrowed the score to 19-10 before halftime.

At the start of the third quarter Clements threw a pick and Anthony Davis later scored from 11 yards out. Making matters worse the Irish drove all the way down to USC's goal line but fumbled. A pick gave Notre Dame the ball back and a quick touchdown made it 25-17. Another pick and another touchdown made it a two-point game but the Irish failed on the 2-point conversion for the tie.

Davis made sure to end the game. After the failed conversion he took the kickoff back for another touchdown. He later added a rushing score in the fourth and USC tacked on an extra score for good measure. Anthony Davis scored 6 total touchdowns, the most ever in a single game by an Irish opponent. The 22-point loss was the worst suffered by an Ara Parseghian-coached Notre Dame squad at that point. The Trojans would go on to romp Ohio State in the Rose Bowl and win the National Championship. 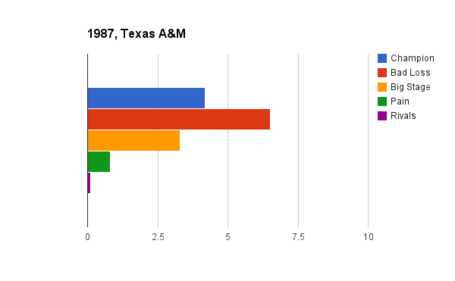 In the 38th worst loss above the Irish lost a tough one at Penn State but still were invited to the Cotton Bowl afterward. Unfortunately, Notre Dame was thoroughly beaten the next week at Miami and stumbled into the post-season against Texas A&M on a losing streak. The only good news was that Tim Brown was awarded the Heisman Trophy following the regular season.

On a chilly Dallas afternoon the game started out well enough for the Irish. Brown scored the game's first touchdown among his 105 receiving yards in the first half alone. Notre Dame led 10-3 but a costly mistake turned the tide. Quarterback Terry Andrysiak, back from injury after missing 7 games, tossed an interception in the end zone. The Aggies marched down the field and would tie the game on a halfback pass play.

Poor officiaiting struck on the next drive as a harmless screen pass fell incomplete (seriously watch the video) but was ruled a fumble by the referees. A&M scooped the ball up and scored a touchdown to take a lead. The Aggies even successully converted the 2-point conversion afterward and the Irish would never be the same.

Notre Dame's offense couldn't get anything going even after Tony Rice came in at quarterback during the second half. The Aggies scored two more touchdowns, added a field goal, and easily cruised to victory. This game remained the worst loss by scoring margin by a Lou Holtz-coached Irish squad. It was also the only time during Holtz' tenure where Notre Dame lost 3 straight games.