Share All sharing options for: 2016 Notre Dame Recruiting Big Board: A Preview

One of the realities of recruiting is that there's always a new class of rising prospects ready to take visits and commit to a school. While some may just be getting comfortable with the 2015 players the Notre Dame staff is already reaching into the ranks of students who are finishing their sophomore years of high school. As you'll see below the Irish aren't wasting any time building relationships.

One thing is clear at this point in time. Notre Dame is trying to get in early with the cream of the crop for 2016. There's still 20 more months until this class reaches National Signing Day and the Irish have already handed out 37 offers, and other teams are over 50+ and even creeping towards 100 offers.

What's more, an astonishing 14 players with 5-star status have been offered already by the Irish. In total, 30 players in the 247 Sports Composite Top 100 have already heard from Notre Dame. 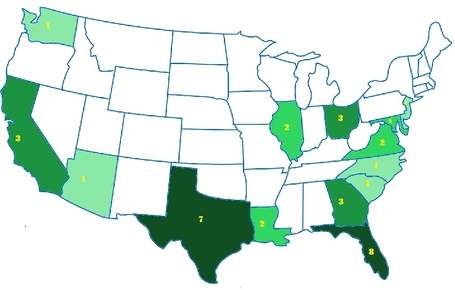 The same recruiting tendencies of the Brian Kelly era are already manifesting themselves early for 2016. The eastern seaboard, southeast, and Florida continue to be a huge priority, while the staff does not plan on leaving Texas and Louisiana any time soon. California will always be a frustrating land to conquer and it is expected to be a big year for high-end talent in Ohio.

Notre Dame is being very aggressive with quarterbacks for 2016. Malik Henry is top Irish target. He's from the same town as Jimmy Clausen but goes to Westlake High instead of Oaks Christian. As the top dual-threat quarterback in the country he's already received several big offers. UCLA will likely be the big competition but Henry is very interested in Notre Dame and will be at the Irish Invasion.

2016 QB Malik Henry out here at #RivalsChallenge registration in a #NotreDame hat.

Haven't seen a more talented QB at the high school level than 2016 target Malik Henry today at the SMSB camp.

Jacob Eason is the other top target for Notre Dame. He might not be a perfect fit as a pocket passer but he's a legacy as his father Tony Eason ('86) caught 15 passes for the Irish after walking on to the team. Jacob has said he grew up with ND as his favorite team but doesn't feel that way anymore. With Florida State, Alabama, Georgia and numerous other schools involved I would be surprised if Eason picks Notre Dame based on fit. He has said he'll visit Notre Dame this summer.

My grandpa Larry would be proud today. His beloved Irish just offered me a scholarship. #ND #GoIrish

The appropriately named Jawon Pass has said Notre Dame is among his favorites, so there's that. He might also visit this summer.

Notre Dame has also offered (LA) Shea Patterson .985 who has been committed to Arizona since December of 2012. However, he's called Notre Dame his dream school so we'll see if he opens things back up.

Keep an eye on (IN) Noah Wezenky NR for the future. He hasn't been offered yet but goes to Bishop Luers and has been to campus multiple timed already. The staff has also been scouting (CA) K.J. Costello .958 and he's been very receptive to Notre Dame.

Chase Lucas goes to Chandler High School just outside Phoenix and his family is very pro-Notre Dame. There could be a very realistic shot here. He's most likely a hybrid slot player.

One of the top northeast players in Kareem Walker goes to a Catholic school in New Jersey. However, he's visited several other schools already and Alabama, Penn State, and a few others appear way out front.

At one point a Mississippi State commit, Robert Washington has now left the Bulldogs class and is interested in Notre Dame. He's already visited twice and has a great relationship with Tony Alford.

Scott Bracey attends a Catholic military school in Richmond, Virginia so there could be a lot for Notre Dame to offer him at the next level. Almost all of the top eastern teams have offered him already.

Auburn looks like the early leader for Stephen Davis. He's visited there 3 times already. It makes sense since his dad was a star for the Tigers before scoring 69 career touchdowns in the NFL.

Demetris Robertson is one of the country's top athletes and has Alabama and UCLA as his favorites. He'll be making a trip up north this summer but Notre Dame doesn't appear to be part of his plans.

Someone to watch out for is (OH) Brendan Ferns .976 whose brother Michael will be a freshman at Michigan this year. Ferns recently visited Notre Dame this summer.

The good news with Sam Bruce is that he now goes to Notre Dame friendly St. Thomas Aquinas following an off-season transfer from the University School. The bad news is that Miami, Florida State, Ohio State, and Oregon are his favorites.

A month ago Nate Craig was offered and had a good talk with Tony Alford. He's planning to see Notre Dame next month in addition to several other schools.

Devin Duvernay is one of the top players in Texas. He's visiting Alabama, Auburn, Clemson, Miami, A&M, Oklahoma, and Oklahoma State this summer but not Notre Dame.

Coming out of the Gulf region of Texas is another top Lonestar receiver in Reggie Hemphill. He recently camped at Clemson and Kentucky while he's been to Texas a ton so far.

Dionte Mullins goes to Gulliver Prep right around the corner from Miami's campus. He might be tough to pull out of that area. So too will be Darnell Salomon out of Champagnat Catholic in Miami.

One local player to keep an eye on will be (IN) Austin Mack .978 who attends Bishop Luers with Noah Wezensky. Farmington's (MI) Desmond Fitzpatrick .921 has visited Notre Dame a couple times and should get an offer at some point too.

Jake Hausmann comes from Notre Dame friendly Archbishop Moeller in Cincinnati and plans on coming to the Irish Invasion. However, Ohio State has a huge lead and may be tough to beat as both his parents attended school in Columbus.

Metro-Atlanta area tight end Isaac Nauta is the consensus top player at his position right now. He's got virtually every top southern team after him and likely stays in the region.

Keep an eye on (OH) Luke Farrell .908 from just ouside Cleveland. He will be attending the Irish Invasion camp.

Notre Dame is already battling Ohio State for a pair of Buckeye state prospects. First, is Tommy Kraemer who is coming off a very successful visit to South Bend last week. Liam Eichenberg from St. Ignatius is also showing a lot of interest and has already been to campus this spring in addition to coming to camp this weekend. My hunch is we get Kraemer and Ohio State gets Eichenberg.

Greg Little is the consensus top player in the country who, God willing, might end up visiting Notre Dame this summer. For a player of his stature the academic angle doesn't appear to be BS. Still a long shot, though.

Notre Dame offered yet another John Churtis H.S. prospect in Willie Allen. Still trying to open up a pipeline...

The Irish have also offered (IL) Erik Swenson .936 but he is committed to Michigan. He camped at ND last summer but chose Michigan in November.

Another Gulliver Prep star makes the Big Board in Joseph Jackson. He has said Alabama leads while Michigan and Texas are his other favorites.

Josh King is an emerging big time end prospect from the suburbs of Chicago. He's leaning towards Iowa right now where he's visited but should make a trip to South Bend in the summer.

One of the most recent offers is Rahshaun Smith who has Oklahoma and Virginia Tech among his leaders. He has no current plans to visit.

The Irish have been recruiting Lokeni Toailoa heavily and he's out of San Bernardino County.

Shoutout to Notre Dame for coming to see ya boy.

This is looking like an early USC-Notre Dame battle.

Notre Dame is right back in Fresno again putting their name in the hat for Caleb Kelly. The big school with the pipeline in that area is Oklahoma and they lead.

A player in line for an offer soon should be (MI) Daelin Hayes .961 from just outside Detroit. He visited South Bend late during the 2013 season and was back on campus this past weekend. Also, (OH) Ethan Tucky .932 is someone else high on Notre Dame's radar. He visited for last year's BYU game, came back to campus last week, and will camp next week for an offer.

Dallas area native Jared Mayden has the whole region after him, plus UCLA, Nebraska, and the Irish. It looks like Baylor or Texas are the favorites.

Virginia Beach's Levonta Taylor has Michigan and Virginia standing out. This one should be tough for Notre Dame.

Deontay Anderson is one of the top prospects in Texas and recently visited Auburn and Texas. He's already been offered by Alabama, LSU, Clemson, and several other top schools.

Brandon Jones and Eric Monroe are also top 10 players in Texas who will be tough to get for Notre Dame.