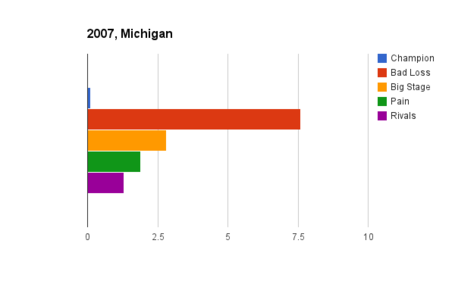 Once the 2007 season began there were very few illusions that it would be a good campaign for the Irish. They were inept in a blowout loss to Georgia Tech in week one and were soundly defeated at Happy Valley the following week. Up next came the Michigan Wolverines. But wait, UM was having their own struggles in 2007, as well. The Wolverines famously lost to Appalachian State at home and then were routed 39-7 in Ann Arbor by Oregon. Both teams came into this contest at 0-2, so was it possible for Notre Dame to play competitively?

The game began with a high snap to quarterback Jimmy Clausen and a loss of 17 yards. On the second series Clausen lost a fumble. When the first quarter ended the Irish were lucky to only be down 10-0 after running 15 offensive plays for a total of -19 yards. The second quarter was just barely better. Notre Dame threw an interception and only gained an additional 25 yards to make it a grand total of 6 yards of offense in the first half.

By then Michigan led 31-0 and cruised in the second half for an easy victory. The Irish didn't enter Michigan territory until a punt return by Tom Zbikowski early in the fourth quarter. The offense gained 1.4 yards per play and turned the ball over 4 times. This loss tied the 2003 loss against Michigan (also a 38-0 defeat) as the worst in rivalry history.

This game still remains the worst loss by Notre Dame against an unranked opponent. 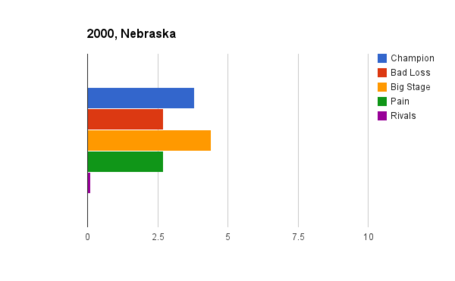 The No. 44 game on the countdown is one of the rare cases of an underdog Irish team nearly taking down a national power in primetime. The anticipation for this game was high for many reasons first of which was that it was the first game against the Cornhuskers since the 1973 Orange Bowl, the first regular season game against Nebraska since 1948, and boy did their fans swarm South Bend!

Notre Dame was coming off a season openeing upset over Texas A&M and feeling pretty good while Nebraska was 2-0 already and the No. 1 team in the country. To start the game the team's exchanged punts then quarterback Arnaz Battle threw an interception. Nebraska took the ball to the ND 29-yard line but quarterback Eric Crouch was stopped a yard short on 4th and 4. The Irish couldn't do anything with the ball and shortly before the end of the 1st quarter Crouch broke free for a 62-yard touchdown. However, Notre Dame answered early in the second with an 82-yard touchdown drive to even the score, which was then immediatley answered by a 65 yard touchdown drive by Nebraska.

In the third quarter Nebraska tacked on another touchdown and seemed poised to take control but Julius Jones returned the subsequent kickoff 100 yards for a score. The Irish defense then came up big with an interception by Shane Walton on the Corn's next drive to stop a scoring opportunity by the visitor. The team's exchanged punts as the 4th quarter began and the latter boot by Nebraska was returned 83 yards by Joey Getherall to tie the game at 21-21.

The Irish had a great opportunity to take their first lead after forcing a Nebraska punt but a Battle pass fell incomplete on 4th and 1 from the Husker 30-yard line. A few punts later and Notre Dame had the ball with just over a minute left from their own 30 but controversially ran the clock out to get into overtime. In the extra frame, the Irish settled for a field goal and Nebraska took advantage with a 7-yard scamper by Crouch to ice the game. 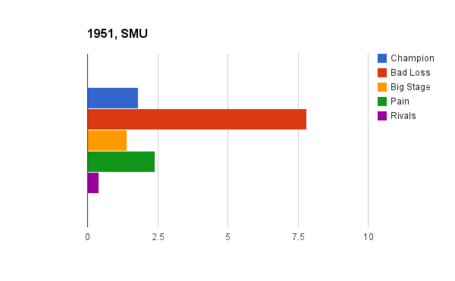 Notre Dame entered the 1951 season coming off Frank Leahy's worst season ever in South Bend. The team was an unthinkable 4-4-1 in 1950 and even lost twice at home after going undefeated inside Notre Dame Stadium from 1943-49. Be that as it may, the Irish were ready to re-load in 1951 and calmly pasted both Indiana and Detroit to open the season by a combined 88-12 score. Coming to town on October 13th were the pesky SMU Mustangs--a team that Notre Dame had struggled with in 3 previous meetings--but no one thought the 5th ranked Irish would lose this one.

It would be SMU quarterback Fred Benners who stole the show leading the Mustang offense with plenty of passing. He got SMU on the board mid-way through the first quarter and sliced up the Irish defense for two more scores later in the game while answering touchdowns by Notre Dame. By the fourth quarter SMU led 27-13 and Notre Dame began mounting a comeback. Benner threw an interception and Johnny Lattner scored a touchdown a few plays later.

Time would run out on the Irish, though. They forced a punt by SMU and were driving again to tie the game but the game ended on a penalty as Notre Dame approached the Mustang red zone. Benners finished the day completing 22 of 42 passes for 336 yards and 4 touchdowns, an astonishing stat line for the early 1950's. SMU recently placed this victory as the No. 16th Greatest Moment in School History. 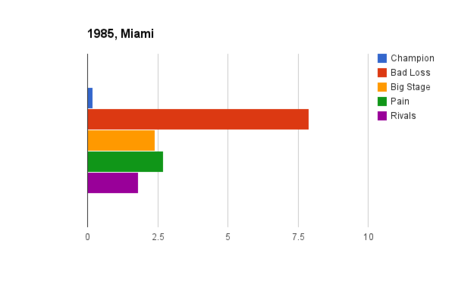 The Miami Hurricane program was just about hitting its stride as a national power in our 42nd Worst Loss in Notre Dame Football History. The Hurricanes had won their first National Title in 1983 under Howard Schnellenberger and were strong again in 1985 during head coach Jimmy Johnson's 2nd season in Coral Gables. The 'Canes began the season with a loss to Florida but rallied to win 9 straight and reach the No. 4 ranking before Notre Dame came to south Florida for a regular season finale.

Notre Dame, forever stuck in neutral in the early to mid-80's, was playing out the Gerry Faust era and sat at 5-5 with consecutive losses to Penn State and LSU. The embattled Irish head coach was already 1-3 against Miami and the three losses were by 22, 20, and 18 points. He had announced his resignation on Tuesday of game week and the school had already hired Lou Holtz as the team flew down to Miami. Would the players rally around their coach one last time?

That would be an emphatic 'no.' By the time Notre Dame picked up its first down the Hurricanes led 13-0. Moments later, Miami took an interception to the house and the route was on. The Irish didn't stop Miami from scoring on any drive. The 'Canes let the clock run out at the half and at the end of the game otherwise every drive ended with points.

Miami pulled its starters mid-way through the fourth but it didn't matter. The backup QB led a touchdown drive and MIami blocked a punt for another touchdown in the fourth quarter to get to the obscene 58 points scored. When the game was over the Irish had surrendered 399 passing yards--most ever at that point in school history--and were literally laughed off the field. The final score was Notre Dame's worst defeat since World War II and tied for the second most points ever surrendered by any Irish team. 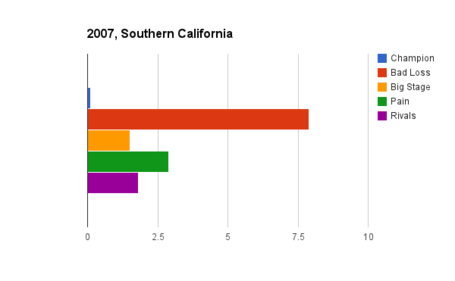 The last 2007 game on the Top 75 list falls at this spot. Notre Dame's season had already cratered at this point with a 1-6 record. However, USC wasn't quite as powerful in this season even though they were 5-1. Their last three games were all very close and they were even beaten by Stanford two weeks prior.

The Irish came out wearing throwback uniforms to honor the 30th anniversary of the 1977 National Championship team but there would be no Notre Dame magic on this afternoon.

Notre Dame punted on their first 3 possessions, had a field goal blocked, and punted three more times before the half. The Irish barely had a pulse and needed to do something in the second half to avoid yet another embarrassment while trailing 17-0. Instead, Travis Thomas fumbled and USC scored a touchdown less than 3 minutes into the third quarter. That was followed by 3 more punts for Notre Dame. Only in the fourth quarter did the Irish mount a sustained drive and it took 17 grueling plays to move 57 yards only to turn the ball over on downs.

The final 38-0 score still stands as the worst loss ever suffered by a Notre Dame team at the hands of USC.