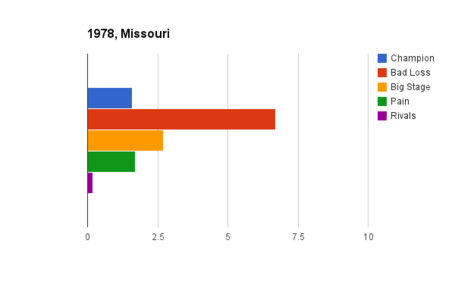 The season opener in 1978 saw Notre Dame fans with super high spirits. The team was defending National Champions and 5th ranked to begin the year, the offense welcomed back senior Joe Montana, and the Irish were 17-point favorites against a Missouri team that was breaking in new head coach Warren Powers. Sure, the Tigers had upset Notre Dame during their last trip to South Bend but that was 6 years prior and out of sight out of mind.

At kickoff it was a scorching 94 degrees at the Stadium and Montana had a terrible first half going 4 for 17 while losing a fumble and throwing two interceptions. In the second half there were opportunities for the Irish but they couldn't capitalize. Jim Stone broke off a 34-yard run to get the ball into the redzone but Montana was stopped short on a 4th & 1 quarterback sneak. Missouri promptly fumbled inside their own 10-yard but they miraculously stopped Irish tailback Vagas Ferguson on 4th down near the goal line.

The stingy Notre Dame defense immediately forced a punt that could only get out to Missouri's 36-yard line and Montana quickly completed a pass down to the Tiger 4-yard line. Unfortunately, a personal foul on Irish receiver Kris Haines was called and Notre Dame ended up settling for a field goal attempt on which the snap was fumbled. Following this, Missouri mounted a drive that resulted in a field goal of their own. Notre Dame was stopped later in the game on fourth down at the Missouri 28-yard line, Ferguson would also fumble at the Missouri 25-yard line, and Randy Harrison fumbled a punt with just over a minute to play.

So ended one of the most frustrating--and sweaty--games in Notre Dame history. The good guys had moved the ball inside Missouri's 25-yard line on 5 separate occasions and came away with zero points. The Fighting Irish were shutout for the first time since 1965, a span of 132 games. 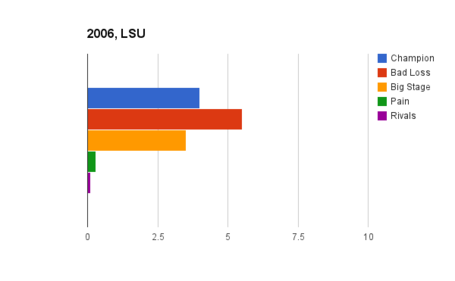 The contest began ominously for Notre Dame as they went only 14 yards on 10 plays and turned the ball over after being stopped on a fake punt. Two plays later and LSU led 7-0. After an Irish punt the Tigers moved 80 yards in 8 plays to take a 14-0 lead with 6 minutes still left in the 1st quarter.

Notre Dame did briefly rally. Quarterback Brady Quinn hit David Grimes for a 24-yard score to cut the lead in half. A sack fumble on LSU quarterback Jamarcus Russell gave Notre Dame great field position but a 34-yard field goal was missed by Carl Gioia. LSU countered with their own missed field goal after Quinn threw an interception. A great drive on the back of 54 rushing yards by Darius Walker led to an Irish touchdown and a 14-14 tie game. However, those would be the last points on the night for Notre Dame.

Russell ran 5 yards for a score to give LSU a lead into halftime. In the second half the Tigers added a pair of field goals before Russell hit Brandon LaFell for a 58-yard touchdown. Both quarterbacks opened their 4th quarter series' with interceptions. Notre Dame could only muster 4 yards in the final frame while LSU tacked on another touchdown. So ended the second season of the Charlie Weis era. 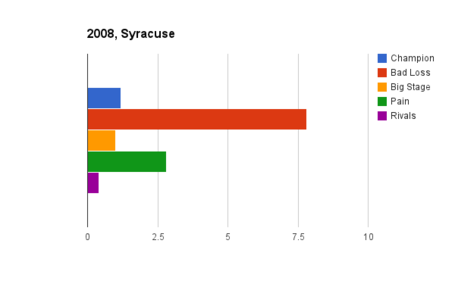 Notre Dame came into this Senior Day game at 6-4 and facing a Syracuse team that was 2-8 on the season and just 5-24 over their last 29 games. The Irish nearly survived a historic comeback from Navy the prior week but wouldn't be as fortunate in this one. Like many heart breaking losses there would be plenty of frustration with the team's inability to put a team away.

Syracuse punted twice to open the second half while Notre Dame punted on their first drive and Brandon Walker missed a 26-yard field goal on the second drive. However, Clausen would connect with Tate for another touchdown and Walker would be successful from 23 yards to give the Irish a 23-10 lead heading into the fourth quarter. From there the meltdown began. Syracuse went 68 yards on 9 plays to score a touchdown. The team's traded punts before Walker missed his second field goal of the game, this time from 49 yards.

With just under 5 minutes left the Orange moved 68 yards again as Cameron Dantley, son of former Irish basketball great Adrian Dantley, threw an 11-yard touchdown pass to gain a 1-point lead. With 42 seconds left 3 Clausen passes felt incomplete but he connected to Tate for 40 yards to try a 53-yard field goal for the win. Walker lined up but missed his third field goal of the game to seal Notre Dame's first defeat to a team with 8 losses. 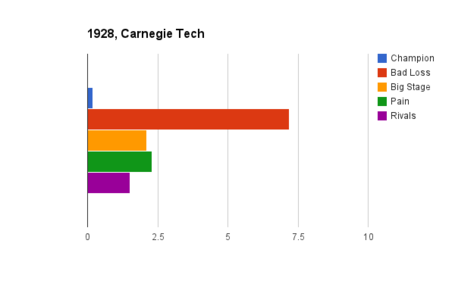 The 1928 season would be Knute Rockne's biggest struggle in South Bend suffering a third of his career losses in this single year alone. His team came into the last home game of the season at a disappointing 5-2 and looked to avenge a historic upset by Carnegie Tech two years prior. Once a cupcake on Notre Dame's schedule in the early part of the decade the Tartans had rapidly improved as a program, were now a strong team on the national scene, and came into this game at a perfect 6-0.

There was concern that the Fighting Irish would be too mentally drained to play after Rockne's "Win One for the Gipper" speech rallied the troops the week before against Army in New York City. That would prove to be correct. Six minutes into the game and Carnegie had raced out to a 14-0 lead. By halftime the Irish still hadn't scored and Carnegie led 20-0.

Rockne's men fought hard on the muddy Cartier Field but a 7-7 split in the second half wasn't enough. Carnegie's team was far too big for the speedy Irish and overpowered Notre Dame the entire game. When the last seconds ticked off the scoreboard Notre Dame suffered its first and only home loss under Knute Rockne. It was the first time in 23 long years that the program had lost in South Bend. The 20-point loss was also the second worst of the Rockne era. 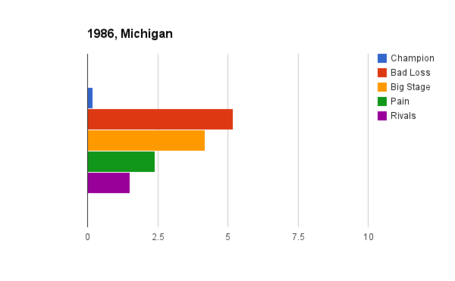 There was a new sheriff in town for Notre Dame to start the 1986 season and his name was Lou Holtz. He was charged with turning around a moribund program that had stagnated through the 80's. His first challenge straight out of the gate would be the No. 3 ranked Michigan Wolverines.

The underdog Irish had the benefit of springing a new offense on the Wolverines and it proved effective as Notre Dame didn't punt for the entire game. The Irish came right out and swiftly scored on their first series. At the end of the game Notre Dame would have piled up 27 first downs and an impressive 455 yards against one of the country's toughest defenses.

Unfortunately the stellar effort didn't put a win on the board. In the past under former coach Gerry Faust the Irish had combined poor play with mistakes and the latter problems still haunted the team. They lost a fumble in the red zone in the second quarter and when Michigan scored in the third quarter to take a 17-14 lead the kickoff landed in no-man's land near the Irish 20-yard line and the Wolverines recovered. Quarterback Jim Harbaugh tossed a 27-yard touchdown on the very next play to take a 24-14 lead.

Notre Dame scored a touchdown but steady kicker John Carney missed the PAT to keep the score at 24-20. More frustration would ensue. The Irish fumbled at the Michigan 15-yard line and quarterback Steve Beuerlein later tossed an interception in the end zone. Late in the game Notre Dame faced a 3rd down from the Michigan 8-yard line and Beuerlein threw what looked like the go-ahead touchdown but the back official controversially ruled receiver Joel Williams out of bounds. Notre Dame settled for the field goal and remained down by 1 point.

The Irish would get one more shot, though. Michigan had seemingly sealed the game driving into Notre Dame territory but they fumbled with 1:33 left. Beuerlein connected on a 33-yard pass to get into field goal territory but a couple of incompletions and a procedural penalty backed the team up and forced a Carney field goal attempt from 45 yards. The kick was missed and a team that was last seen finishing 1985 with one of the worst losses in school history was about as impressive as it could be in a near-upset of No. 3 Michigan.