Our countdown begins with 3 losses under the Gerry Faust regime, and more.

Last week we gave you an introduction to this series and explained the method by which we ranked the worst losses in Notre Dame history.

***Explanation of the Ranking System***

Today it's time to get the countdown started. I apologize beforehand for any stress, anxiety, and depression this series will inevitably cause you. 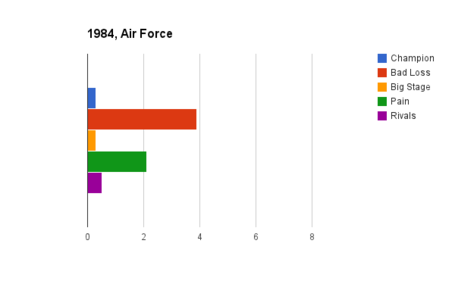 This was one of those weird games (like BYU in 2012 & 2013) where a team played back-to-back seasons inside Notre Dame Stadium. Amazingly, Irish head coach Gerry Faust lost 4 straight games to Air Force and this was the 3rd of those losses and the worst defeat in terms of point differential of them all.

The prior season the Irish had lost to Air Force at home on Senior Day by just 1 point after missing a field goal. This was a game of revenge in a big way.

Instead of knocking the doors off Air Force in front of a sold out Stadium and ESPN television audience the Irish couldn't get anything going on offense and became the first squad to lose 3 straight games to a service academy. With starting quarterback Steve Beuerlein sidelined for the game with a shoulder injury Notre Dame only mustered 207 total yards of offense. Perhaps worse still, Air Force ran all over the Irish to the tune of 371 yards.

Notre Dame fumbled the ball 6 times but only lost 1 one of them and recovered 3 Air Force fumbles. It still wasn't enough to defeat the Falcons. Star running back Allen Pinkett was held to just 76 rushing yards on 22 carries as the Irish scored their fewest points at home since Faust's first meeting with USC back in 1981. 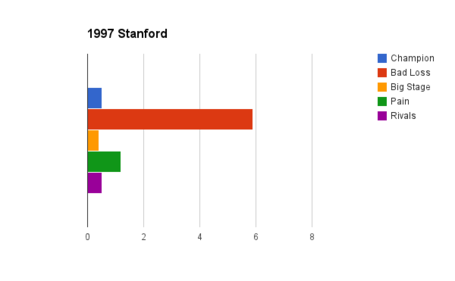 The Bob Davie era got off to a really bad start and this loss to Stanford was the 4th in a row in the beginning of the season. The No. 11 ranked Irish sneaked by Georgia Tech by 4 points in the home opener but it was all down hill from there. Losses to Purdue, Michigan State, and Michigan came in consecutive weeks before the 3-1 Cardinal hosted the Irish.

Notre Dame's offense was criticized in its first 3 losses for not taking enough chances down-field so Davie had quarterback Ron Powlus throw some deep bombs early on to try and open up the run game. It worked as Autry Denson scampered for 106 yards in the first half but Stanford always had an answer and led 10-9 going into the break.

The second half would be a complete disaster for Notre Dame. For the fifth straight game the Irish didn't score any points in the third quarter and Stanford kept moving the ball on the strength of 322 rushing yards. Down 31-15 late in the game Powlus was sacked in the end zone for a safety and Stanford ran the clock out for an easy win.

Standing at 1-4 on the season the embarrassment was sky-high knowing the program had just suffered its first 4-game losing streak in 34 years. Maybe the worst part was the Notre Dame Administration getting their first up-close look at Stanford head coach Tyrone Willingham and being impressed. 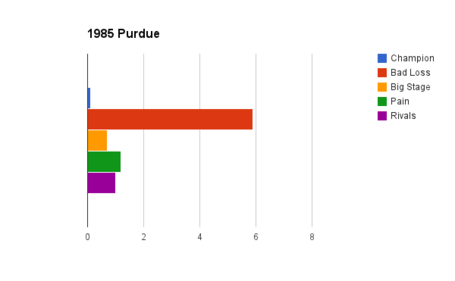 Yet another offensive dud from Notre Dame. It was week 3 of the season and Notre Dame came into the game at 1-1 after splitting against the Michigan schools. Purdue was also 1-1 after losing to Pitt and beating Ball State. The Boilers were intent on slowing down running back Allen Pinkett and that's exactly what they did. At the end of the day the senior Irish tailback only mustered 45 yards on 21 carries.

The passing game wasn't much better, either. Steve Beuerlein and Terry Andrysiak combined to go 12 for 33 with 161 yards, no touchdowns, and 2 interceptions including a pick six. At the final whistle the Irish had only gained 217 yards at an absurdly low 2.9 yards per play. Purdue, on the other hand, got a fantastic game out of Jim Everett who threw for 368 yards and 3 touchdowns.

The pain of this loss was only compounded when Purdue went on to lose 5 out of their last 8 games. This '85 loss to the Boilers by 18 points was tied for the 5th worst under Gerry Faust. 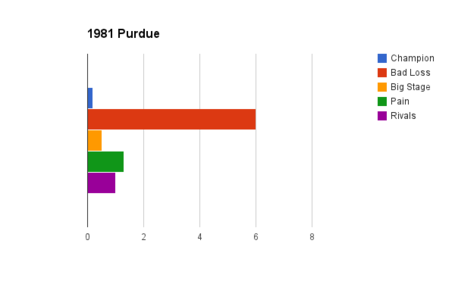 The countdown continues with our second straight road loss at Purdue by a Faust team. This was the third game of the new Irish head coach's career and although they were beat soundly the prior week by Michigan, the Irish were looking to get back on the horse against a Purdue team that had just fallen to Minnesota.

However, Purdue out-gained the Irish and came away win an improbable victory. Trailing 14-7 with 2:57 left in the game and from their own 20-yard line, the Boilers marched down the field and converted a 4th and goal from the 7-yard line to score a touchdown with only 25 seconds left. Instead of kicking the extra point and settling for a tie in the days before overtime, Purdue decided to go for the 2-point conversion. Quarterback Scott Campbell lofted a ball into the end zone that was caught by Steve Bryant to give the Boilers the 1-point victory.

Purdue had good teams during the prior two years but it was still shocking to see an Irish squad of Devine recruits lose to an unranked Boilermaker team. Like the 1985 loss, it was made worse by Purdue finishing 5-6 on the season. 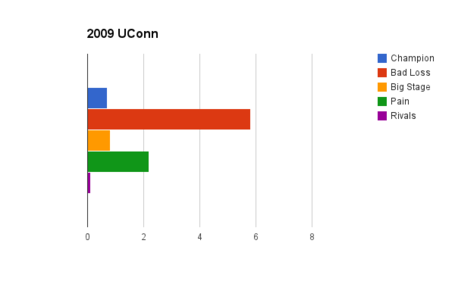 The 2009 UConn game comes in as the 71st worst loss in Notre Dame history. The plot lines for this game were thick. Would it be Charlie Weis' last home game? Could Notre Dame avoid two straight Senior Day losses? Could UConn overcome 3 straight losses since the death of corner Jasper Howard? Would former Irish quarterback Zach Frazer win in his return to Notre Dame Stadium?

The Irish calmly sped out to a 14-0 lead by the early 2nd quarter and then slowly but surely collapsed. A long touchdown run by Jordan Todman cut the lead in half and UConn added a field goal shortly before halftime as well. Notre Dame added a field goal in the third quarter but Todman took the ensuing kickoff back for a touchdown to tie the game. The Irish added their own field goal early in the 4th but seemed poised to blow the game late but a pair of holding penalties took back touchdown runs by UConn and they settled for a game-tying field goal. Running back Armando Allen fumbled on the next series but luckily the Huskies missed the field go to win it. 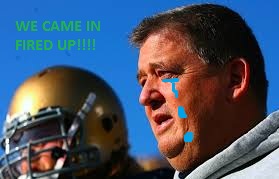 In overtime both teams opened up with touchdowns but the Irish settled for a field goal on their second series. UConn, taking advantage of Notre Dame's weak run defense, scored easily from 4 yards out to win the game. It was called the Huskies biggest win in program history and although they would rally to win their last 4 games--including a bowl game victory over South Carolina--this loss by Notre Dame was another depressing low for the Charlie Weis era.