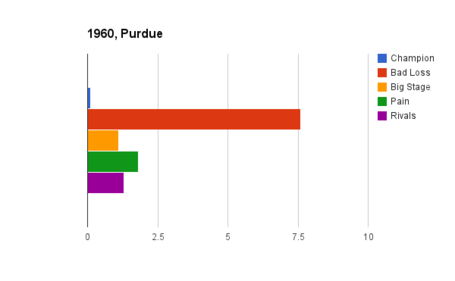 In 1959 Notre Dame made a coaching change and brought in former Irish player Joe Kuharich who had been leading the Washington Redskins for the past 5 years. Kuharich stumbled to a 5-5 record and entered 1960 with Notre Dame unranked. However, a 21-7 win in the opener over California jumped the Irish up to No. 12 in the polls prior to a visit from the Purdue Boilermakers.

A barrage of offensive fireworks would explode at the start of this game but Notre Dame couldn't keep up. Each team scored on their first three drives to tie the game at 13-13 but before the end of the first half the Irish would turn the ball over 4 times and find themselves down 45-13 going into the break. Purdue scored on each of their first 7 possessions while taking advantage of Notre Dame's miscues.

When the game ended each team had gained 358 yards but the score was not quite even. This Purdue team would finish 1960 with a 4-4-1 record and their 51 points scored were the most ever scored against the Fighting Irish inside Notre Dame Stadium. 50+ years later that record still stands. 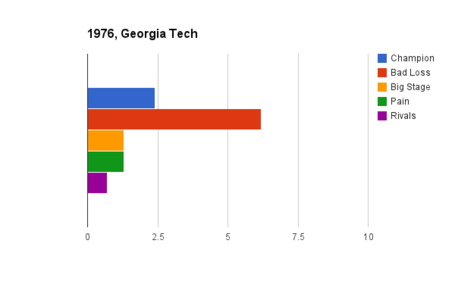 It was the second year of Dan Devine's tenure and the Irish lost the opener to eventual National Champion Pitt Panthers (worst loss #69) but rebounded to win 6 straight games by a combined score of 176 to 33, including shutouts in three of those contests. The No. 11 ranked Irish headed down to Atlanta to face a 3-4-1 Georgia Tech team that had lost decisively the prior year in South Bend.

This game was scoreless after the first quarter and Notre Dame led 14-3 with just under 2 minutes left in the first half. Unfortunately, Tech put together a touchdown drive before the break to close the gap to 4 points. Georgia Tech scored a touchdown in the third quarter to take the lead and Notre Dame's last series would prove to be their end.

With 14:22 left to go the Irish started moving the ball but eventually had to punt. Lucky for them that the Yellow Jackets were called for holding on the punt and the drive would continue. However, a controversial clipping call on a reverse proved too much as the Irish were backed up and gave the ball back to Georgia Tech. From there, the Jackets ate up 7 minutes on 15-play touchdown drive to ice the game.

Georgia Tech would finish at 4-6-1 which would be the most losses for a program that ever beat a Devine-led Notre Dame team. 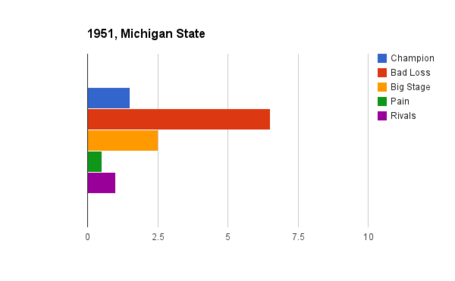 1951 was a strange year for Notre Dame coming off a shocking 4-loss season in '50 under the legendary Frank Leahy. The team looked strong to start the year but lost at home as the No. 5 team in the land to unranked SMU. Three straight easy wins moved Notre Dame back to No. 11 before they visited East Lansing and No. 5 undefeated Michigan State. Many thought it would be a very tough game for the Irish but no one could have predicted the complete disaster that would happen in this game.

Michigan State scored on an 88-yard run on their first play from scrimmage and never looked back. Notre Dame was out-classed in every way during the game. It was 21-0 at the half and Notre Dame never moved the ball past the State 39-yard line the entire game. This was the worst loss suffered by Leahy while at Notre Dame by a mile. This Michigan State team--which was considered the best in school history during the game--would go on to win the National Championship. 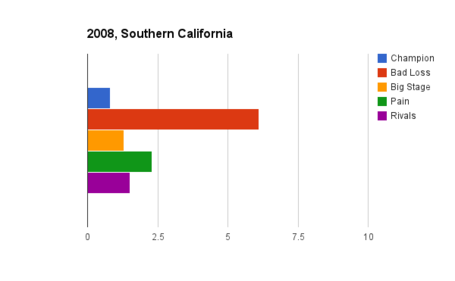 You'll have to look long and hard to find a more depressing second half of the season than what transpired in the year 2008 for Notre Dame. A 17-3 lead was blown in an overtime loss to Pitt, the Irish were shutout by Boston College, Navy nearly scored their 3rd touchdown in less than 2 minutes in what would have been one of the worst blown leads in college history, and then the team lost to a horrible Syracuse team on Senior Day.

Enter the No. 5 ranked and 9-1 USC Trojans and their top ranked defense.

It was a complete slaughter. 91 total yards for Notre Dame. 4 first downs. It took until the last play of the third quarter for Notre Dame to move the sticks. The Irish didn't get the ball past mid-field until the fourth quarter. 2 for 14 on third down. 1.9 yards per play. Jimmy Clausen went 11 for 22 for 41 yards and 2 interceptions. I'll stop now. 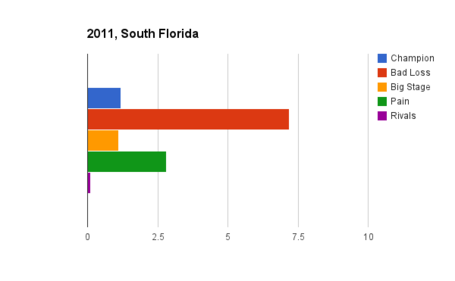 The first half couldn't have been scripted any worse for Notre Dame. A goal line fumble was taken back for a touchdown on the opening series. Harrison Smith committed back-to-back facemask penalties that gifted USF a field goal. Dayne Crist threw an interception in the end zone after a Cierre Wood touchdown was called back due to holding. Theo Riddick fumbled a punt return that gave the ball to the Bulls on the Irish 20-yard line. Seemingly before anyone could blink the Irish had gained 171 yards but were being shutout 16-0 at halftime.

Then the thunderstorms came and dealyed the game for 2 hours and 10 minutes.

When the game started back up the Irish switched to Tommy Rees at quarterback but the voodoo remained. Following a USF punt, the first drive went down to the USF 5-yard line where a Rees pass deflected off T.J. Jones' helmet for an interception. A touchdown by Michael Floyd closed the gap but a missed field goal on the following series took more air out of the ND sails. The teams traded touchdowns early in the 4th quarter to make it 23-13 and shortly after the game was post-poned again for 45 minutes.

The very first play after the break was another Rees interception. A last gasp 10-play 99 yard touchdown drive got the Irish within 3 points but the onside kick failed with 21 seconds left and a promising start to the season went up in flames. The box score still captures some of the cruelty of the loss. 508 yards for Notre Dame to 254 for USF. 5 turnovers for the Irish and zero for the Bulls. South Florida converted just 2 third downs while Notre Dame went 2 for 6 in red zone scoring opportunities.

The Bulls--thought to be one of the 2011 favorites in the Big East--would go on to have a miserable 5-7 season only making this loss that much worse.