Ryan Switzer and the Value of a Dynamic Return Man

Notre Dame stinks at punt return. They are playing the nation's top punt returner this fall. We investigate.

Share All sharing options for: Ryan Switzer and the Value of a Dynamic Return Man

You can take the time to read that piece to pick up on all the changes to special teams in recent years and some reasoning behind Notre Dame's struggles. Or read this 33 word summary:

So what's the solution for the Irish? In order: Get a dynamic returner, be more aggressive on defense and in returns, block better, worry less about fakes, and trap opponents deep more often.

Get a dynamic returner. I'm telling you, everyone and their mother wants to talk about blocking but nothing is more important than a dynamic returner who is smart, tough, and lives on the edge without turning the ball over. TJ Jones has been the most qualified returner of the Kelly era and it's no surprise that 2013 was the best punt return game since the 2010 season began. Jones was able to double the yardage from 2012 while returning 50% less punts--a nice little increase.

Granted, the total punt return yardage in 2013 for the Irish was still meager at 106 yards but keep in mind that 58 teams in the country totaled less than 150 yards for the entire season. That's 46.4% of college football and really goes to show how much this aspect of the game has changed. I mean, with Jones we're talking about 14 returns for an entire football season. Can you imagine trying to analyze a running back on 14 carries?

Today we are going to look at the punt return touchdowns from North Carolina's Ryan Switzer who was profiled in our off-season preview of the Tar Heels. As a true freshman in 2013 he scored 5 touchdowns which is the most since Hawaii's Chad Owens also scored 5 in 2004.

As mentioned in our UNC preview, Switzer totaled 71.9% of his yardage on these 5 runs. In fact, just these 5 runs alone would have placed Switzer in 6th place nationally for individual punt return yardage in 2013. That's how much one return can boost rankings. Had TJ Jones returned one punt for 80 yards his total yardage would have moved from 73rd nationally to 32nd nationally and we'd be talking about how the punt return woes were fixed.

Just one return. That's all it takes.

Now let's look at the film for each of Switzer's touchdowns and see if we can pick up some tendencies.

The Virginia punter connects on a nice punt sending the ball about 50 yards from the line of scrimmage, and nearly 65 yards from his foot. One of the keys to a good return these days is a booming punt that out-kicks the coverage and that happens a little bit here. 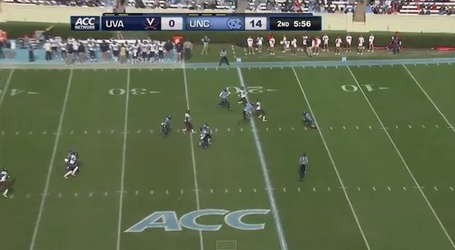 At the moment Switzer attempts to catch the punt there are 4 Cavaliers who have beaten their men down field. Is this great blocking? I would argue it is not although both of the defenders to Switzer's right over-run the play. This allows Switzer to actually drop the punt, pick it up, and use his elite quickness to get up field and race past tacklers.

99% of return men will likely be stopped for little or no gain on this play. Look at No. 42 standing at the 25-yard line. He's in perfect position to make a tackle. Yet, Switzer makes him look silly with his initial burst. He then proceeds to fly through 2 tacklers and shrugs off the kicker on his way to the end zone.

Here are a lot of factors lining up for a good return. North Carolina has pinned Pitt deep (4th & 32 LOL), the Panthers eschew a spread formation, and the punter unleashes a bomb that out-kicks the coverage. This is another 60-yard punt in the air!

This is a return with pretty good blocking. The Tar Heels set up a decent wall and Switzer benefits from a border-line block in the back no call to get the edge and run to the end zone.

Pinned deep? Check. Booming punt that out-kicks the coverage? Check. The long punt gives Switzer some breathing room when he catches the ball. 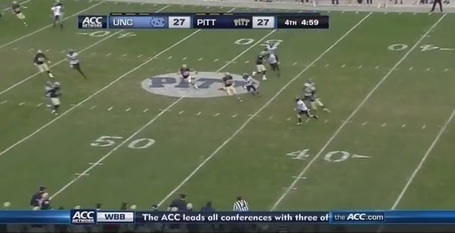 Is this good blocking? There are about 5 Pitt players running completely free when Switzer gets moving. What's interesting is Switzer is a lot like Johnny Manziel in the open field. Defenders consistently mis-judge his quickness and are made to look like they are taking horrendous angles.

Anyway, he makes 7 players miss and breaks 4 tackles on the way to the end zone. No big deal.

Another punt from deep inside their opponent's territory. This wasn't a booming kick but it was just long enough to let Switzer make a play. 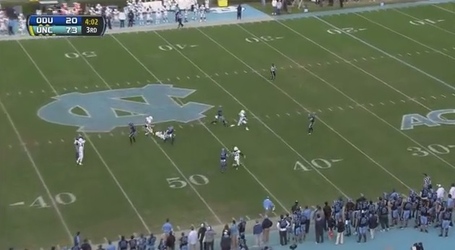 Here is Switzer right before he catches the ball. Two defenders have beat their men and look to have him cornered. This is probably a fair catch for the less bold returners. What can he do in this situation?

How about an immediate 360 spin, collapse a defenders ankles with a cut, and out-race the rest of the I-AA opponents?

This is just absurd. 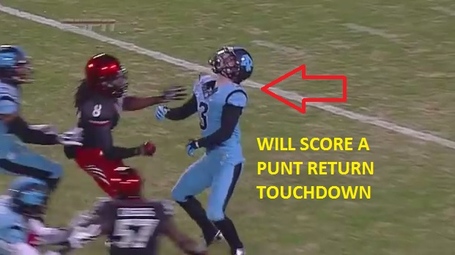 I think this defender actually touches Switzer and he still stays focused and has no intention of fair catching the ball. 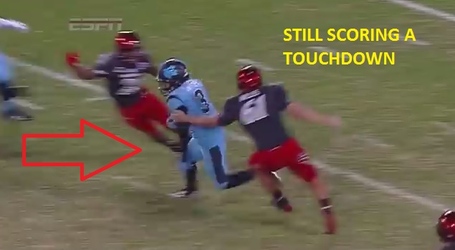 Oh, there he is again smoking past two defenders and breaking tackles in about 3 steps.

Listen, I'm not claiming that a dynamic returner is the only thing a punt team needs. But damn if it isn't incredibly crucial. It's never been as difficult to return punts and a super quick athlete with no fear can be a X-factor. This is the life of a punt returner:

If Jones makes that last man miss and scores a touchdown he would have moved up 26 spots in the national punt return yardage rankings. All it takes is one big return because they have never been more rare.

I was curious to see what the punt return game was like when ranked teams were playing each other. I totaled up all of the qualifying games from 2013 and these are the stats:

Not a single touchdown. Is it that surprising? Notre Dame returned 5 punts for 43 yards against ranked teams which is right on the average for all of the games combined. Maybe more interesting is that teams in 34 of the games either didn't return a punt or did so for negative yardage.

Is Notre Dame due to break a long touchdown run in 2014? Maybe, but we better not punt the ball to Ryan Switzer.