Hitting the Links: Still No Rocket in the Hall of Fame

Share All sharing options for: Hitting the Links: Still No Rocket in the Hall of Fame 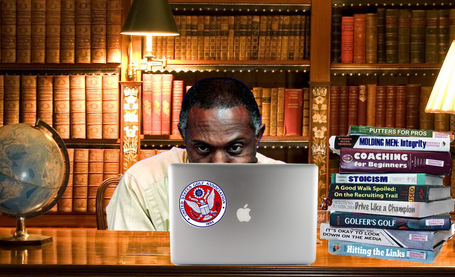 I probably would have been a Notre Dame fan if Rocket Ismail never played football. No guarantees, though. As a Catholic growing up in northern Chautauqua County odds are the Fighting Irish were always going to be my team. Penn State, Syracuse, or Michigan might have sneaked through the door, though, and because of that I'm thankful for a 175 pound speed demon with the funky name and memorable nickname captivating my attention in the late 80's.

So it's with great pain that I read Rocket hasn't made the cut for the College Football Hall of Fame. Again. They already blew the opportunity to induct Ismail last year during the Hall of Fame's last ceremony in South Bend. But nope that wasn't good enough and he'll also have to wait another year.

Here are the requirements for candidacy into the Hall:

To be eligible for the ballot, players must have been named a First Team All-American by a major/national selector as recognized and utilized by the NCAA for their consensus All-America teams; played their last year of intercollegiate football at least 10 years prior; played within the last 50 years and cannot be currently playing professional football. Coaches must have coached a minimum of 10 years and 100 games as a head coach; won at least 60 percent of their games; and be retired from coaching for at least three years. If a coach is retired and over the age of 70, there is no waiting period. If he is over the age of 75, he is eligible as an active coach. In both cases, the candidate's post-football record as a citizen may also be weighed.

Ismail was eligibile the moment he retired from the NFL which was following the 2001 season. That means if my math is correct Rocket has been passed over 13 times.

Now, a lot of other great players have been passed over and waitied a long time too. In a press release for this year's ballot it was mentioned that nearly 4.99 million individuals have played college football and only 0.0002 percent are in the Hall of Fame. That's a very, very, very exclusive club.

I would imagine in this stat-heavy culture Rocket's resume is taking a hit. After all, he only touched the ball in college 273 times, scored 9 touchdowns from scrimmage, and scored just 15 total touchdowns over his 3-year career. In terms of mass production his career just doesn't stack up to some of his fellow ballot members. Still, Rocket truly lived up to his name. Like many college players he was here today and gone tomorrow but he really made an impact in the way he dazzled college football fans.

It was a different era and a conservative offense that Ismail played in but 7.7 yards per rush, 22.0 yards per catch, and 6 special teams touchdowns on 71 touches is outrageous explosiveness. And of course, our eyes verified those gaudy averages.

Here are the new members of the College Football Hall of Fame for 2014:

No doubt Derrick Thomas is getting most of the publicity for finally being voted in, and rightfully so. While I don't claim to be a historian on all of these members that list looks pretty shaky in comparison to Rocket's career at Notre Dame. Ismail was the bona fide top player in the country for the 1990 season! The fact that he came in second in the Heisman voting to a quarterback who threw 28 interceptions in non-major conference football means Rocket's wait into the Hall is even more of a slap in the face.

Tony Levine the head coach at Houston signed a new 5-year deal with the school.

The O'Bannon trial is set to begin next month.

BYU is looking into allegations of improper benefits at their program.

The SEC released their scheduling pairings through 2025.

The 30 for 30 documentary "The U" is coming back with a second part episode.

HLS: Is everything you know about the Guard wrong?