The Irish head to Baltimore to take on the Terps for the rubber match in the Final Four; Kavanagh's game-winner was simply a great lacrosse play. I loved it so much, I'm gonna break it down for you.

I think I've exhausted the Maryland-Notre Dame matchup to the greatest possible extent. I went through a gameday preview for the regular season matchup (not much has changed) as well as including Jack Near's fast break pass to Kavanagh to win the ACC Semi's. That said, I highly recommend checking out the guys over at College Crosse, who have a great statistical breakdown of the game on Saturday.

I have to say, it is hard to argue with their analysis. While some numbers would indicate that the Irish could win, taking Maryland's recent play into account has to give the edge to the Terps. They shrugged off a pesky Cornell team in the opening round and completely blew away Bryant last week. Charlie Raffa made Liam O'Connor look foolish in both games and the Irish are now dealing with a healthy Mike Chanenchuk and a Maryland team playing a Final Four game at home basically.

It is not out of the realm of possibility that the Irish make it to the championship game, and there is a school of thought that the Terps haven't been tested yet in the tournament (Cornell being an Ivy school that had a weak tournament performance as an overall conference and Bryant being a cinderella that was due for a letdown game after upsetting Syracuse), but the Terps have been in this position twice in the past three years and both times they made the championship game.

Three Irish players were on the list of 96 All-American selections by the USILA.  Notre Dame captain Steven O'Hara joined Maryland d-man Goran Murray and Loyola longstick Joe Fletcher on the First Team, while Matt Kavanagh made the Second Team alongside Kiernan McArdle of St. Johns, Kevin Rice of Syracuse and Justin Ward of Loyola. Irish middie Jack Near made the Honorable Mention list, too.  Congrats to all!

You said something about a Film breakdown, dude...

Matt Kavanagh's OT game-winner against Albany was a thing of beauty and while it looked somewhat simple, the decision-making behind it made it exceptional.

Kavanagh employed a move that doesn't really have a term, but I like to call it a "double dodge."  At it's core, Kavanagh forced a mismatch by driving to the net, backing out, then doing the same thing again.

Let's have a look. 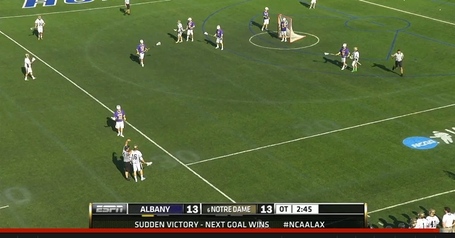 This is the initial look right before the whistle. Sergio Perkovic (#16) has the ball in the bottom left of the screen.  Albany's defense is playing rather tight. Westy Hopkins (#12) is the Irish player on the crease, but looks like he is being triple-teamed because the Albany LSM and opposite-side middie are playing so close to cage.  Ordinarily, you'd probably see the LSM on Perkovic and the defense extending a little, but Albany is not willing to give up a shot from close in. 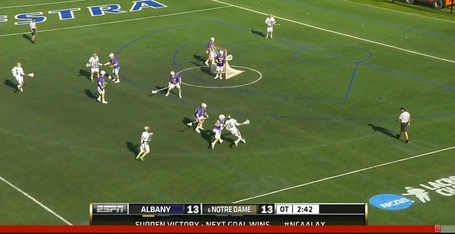 Perkovic drives parallel to the touch-line and Kavanagh runs right at him, forcing a double on Perkovic and freeing Kavanagh up top in space.  They basically switch positions. 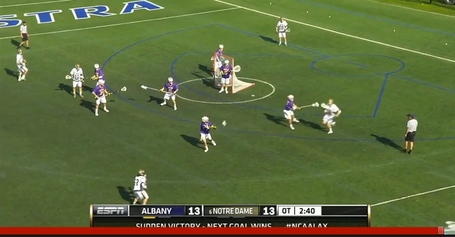 Perkovic passes to Kavanagh, but there is one problem with the play: Kavanagh's longstick defenseman followed him up top, making the drive on goal a problem.  However, check out Hopkins on net. He's "sluffing" away from the cage, eliminating the need for a slide from the crease.

(WARNING: LAX JARGON TO FOLLOW) When an offense puts a player on the crease, that defender guarding him becomes a primary "slide," or the player that will attack the ballcarrier if the defender gets beat. A "2nd Slide" is the backside defenseman who has to recover to guard the now-open man on crease. In this picture, the 2nd Slide should be the Albany player behind the cage, but could also be that shortstick currently on Hopkins. If there is no offensive player on crease, the slide-role falls to the closest adjacent defender. 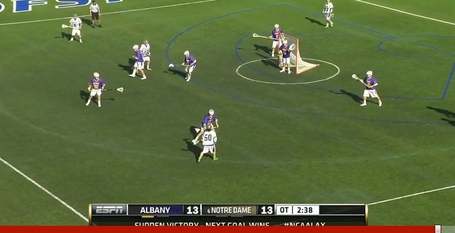 This is Kavanagh's look before he drives on net. Hopkins has opened up the crease, but Albany is still playing right on net. The topside LSM is playing REALLY close in and the crease defender on Hopkins isn't moving at all.  If Kavanagh wants to score, he has to create a mismatch to give himself space. 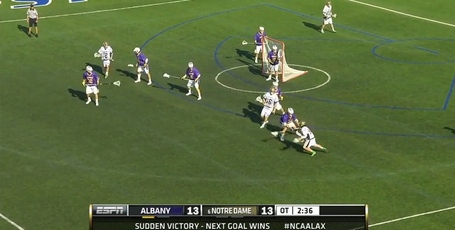 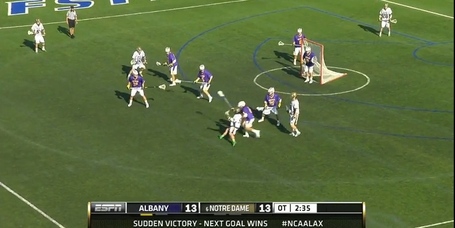 Here is the play: Kavanagh drives at the same route as Perkovic did before, but Perkovic freezes in position, attempting to set a pick. 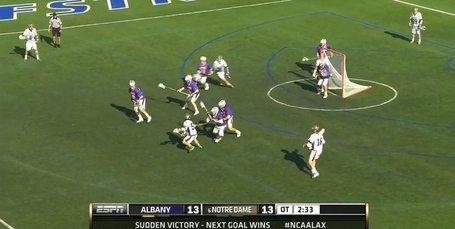 The possibility of a double is too tempting for Perkovic's short-stick defender, and he slides to Kavanagh. Recognizing this, Kavanagh backs out. If you watch the video above, two things happen. One, the longstick defenseman chooses to not overpursue the play, instead falling back on cage (and look at how quickly that defense collapsed in...FIVE Albany defenders are on crease!) and two, the shortstick defender commits what has to be the most obvious non-called slash in this year's NCAA Tournament. Seriously, the guy just swung at Kavanagh's arm with no intention to hit the stick. 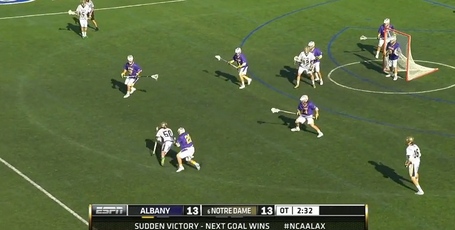 .....but in doing so, he allowed Kavanagh to drive right by him. This is the mismatch Kavanagh was looking for. Any time an offense in lacrosse wants to run a play, doing so with the player guarded by a short stick is the most ideal. In the case of Kavanagh, having an attackman like Kavanagh guarded by a short-stick should mean an automatic shot. All Kavanagh needed was space, and he got it. 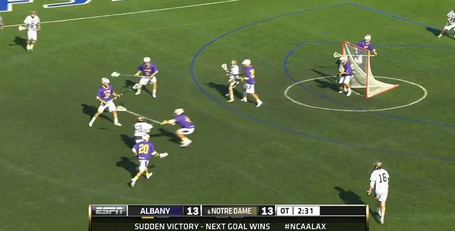 Albany's crease defenseman slides to Kavanagh, but it's too late. Kavanagh has gotten the window he needed to shoot and went low, as the defenseman came high with his stick and the goalie is playing "up," expecting a high shot.