Payback from the Seminoles, a rough one in Knoxville, and more. 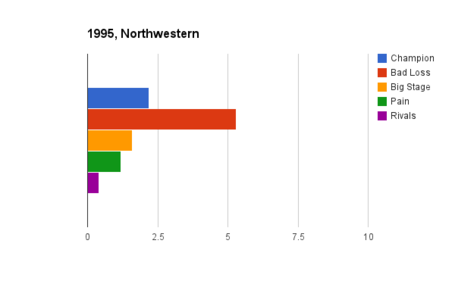 1995 was supposed to be a comeback year for Notre Dame, a return to national prominence following a disappointing 1994 campaign. Beginning the year with lowly Northwestern--whom Notre Dame had won 14 straight games against--didn't appear to be much of a challenge as the Irish entered Rock's House as 28-point favorites.

When Irish running back Randy Kinder fumbled on the first series that sinking feeling of an upset began to grip Notre Dame fans. Northwestern jumped out to a lead and had Notre Dame chasing for the entire first half.

Notre Dame tried to keep pace and finally scored a touchdown late in the first half but missed the PAT and trailed 10-9 going into the break. Northwestern scored a TD in the third quarter and really put the Irish in trouble, especially after a fumble on the next series. With just over 6 minutes left Notre Dame got a much needed touchdown but a linemen stepped on quarterback Ron Powlus after the snap killing the 2-point chance to tie the game. The Irish got the ball back again but failed on a 4th and 2 attempt sealing their fate. Northwestern would go on to have a miracle 10-2 Rose Bowl winning season but at the time this was one of the most shocking upsets in Irish history. 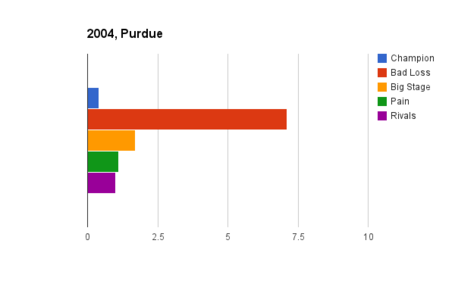 The heat really turned up on Tyrone Willingham following a disastrous 2003 season and a season opening loss at BYU to begin 2004 (which just missed the cut for this list), however, the Irish rallied and won three straight before hosting Purdue in early October. The Boilers came into this game ranked No. 15 in the country and were undefeated at 3-0.

A handful of first half bad breaks truly buried the Irish. After tying the game at 3-3, Purdue took the kickoff back for a score. Notre Dame then missed a field goal and later lost a fumble at Purdue's 1-yard line. Purdue responded with a 97-yard touchdown drive to take a 20-3 lead into halftime. Despite out-gaining the Boilers 536-512 and a career high 432 passing yards from sophomore QB Brady Quinn, the Irish never came close to contending in this game. 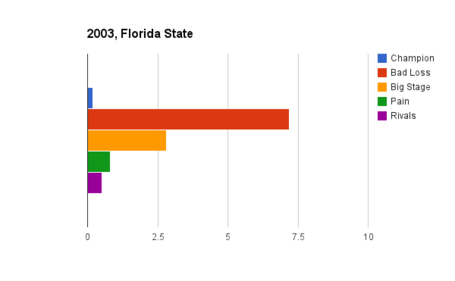 When the final whistle blew for this game it might have been one of the lowest moments in school history. The Irish would fall to 2-6 on the season and already endured a pair of 3-game losing streaks. Despite Florida State quarterback Chris Rix throwing 3 interceptions and Notre Dame gaining a somewhat respectable 321 yards this game was never in doubt as FSU looked for revenge following the prior year's loss at home to the Irish.

Irish quarterback Brady Quinn only completed 20 of his 52 passes and tossed 3 interceptions of his own. While Rix turned the ball over 3 times he also completed 17 passes for an astonishing 327 yards and 4 touchdowns. Florida State wide receiver Craphonso Thorpe went off hauling in 7 receptions for 217 yards and 2 scores. When the Seminoles led 23-0 at the half they simply cruised the rest of the way. This loss remains the third worst loss for the Irish inside Notre Dame Stadium. 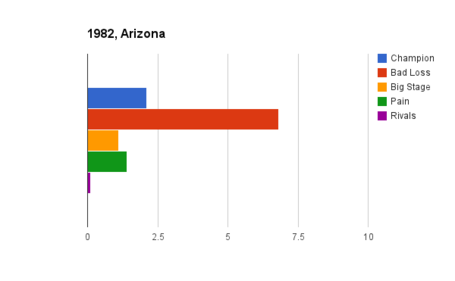 Gerry Faust's first season in South Bend was a huge disappointment but 1982 started off really well with wins over Michigan, Purdue, Michigan State, and a last-minute game-winning field goal over Miami. Unfortunately, a last-minute field goal would do the Irish in against the 1-2-1 Wildcats from out west.

Things started off great as Notre Dame led 10-0 before the first quarter ended following running back Allen Pinkett's first career touchdown run. The Irish defense was stingy limiting Arizona to just 75 yards and 4 first downs in the first half but a couple of interceptions by quarterback Blair Kiel kept Notre Dame from scoring any further points before the break.

In the second half Arizona ate up nearly 20 minutes of game clock and kicked a pair of field goals in the third quarter to close the gap to 10-6. Notre Dame rebounded with a field goal but Arizona rallied to score their only touchdown of the game and tie things up at 13-13. The Irish were able to drive down to the Wildcat 39-yard line but punted from there and gave Arizona the ball back. Arizona then started a drive, moved the ball, and lined up for a 48-yard field goal into the wind with 6 seconds left. Freshman kicker Max Zendejas nailed the kick to finish off the upset as time expired. 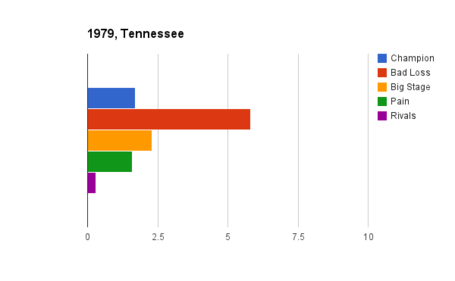 Late in the 1979 season Notre Dame stood at 6-2 and was still looking at a chance to receive a bid to the Sugar Bowl. The previous season the Irish had welcomed Tennessee to South Bend and beat the Vols in the first-ever meeting between the two schools. A trip down South to play the 4-3 Volunteers didn't seem too daunting. Notre Dame was ranked 13th in the country and Tennessee unranked.

The Fighting Irish did manage to score first on the road taking a 6-0 lead but a specially designed 3-4 defense meant to stop Tennessee's outside run game completely backfired on Notre Dame. The Vols piled up 352 rushing yards and fullback Hubert Simpson continually crashed through the middle of the line for 117 yards and a school record 4 touchdowns.

Tennessee led 30-12 at the half, out-scored Notre Dame 10-0 in the third quarter and left the Irish completely stunned inside the massive Neyland Stadium. This loss would be the worst suffered by Notre Dame under head coach Dan Devine.