Brian VanGorder comes to Notre Dame with a reputation for being aggressive as a defensive coordinator. The Blue and Gold game certainly provided a number of examples of this. However, BVG didn't use a damn the torpedoes, Jon Tenuta-style assault in the spring game. Rather, he used a scheme that was designed to exploit the built-in adjustments present in most offenses. Let's take a look at the film, and I'll show you what I mean. 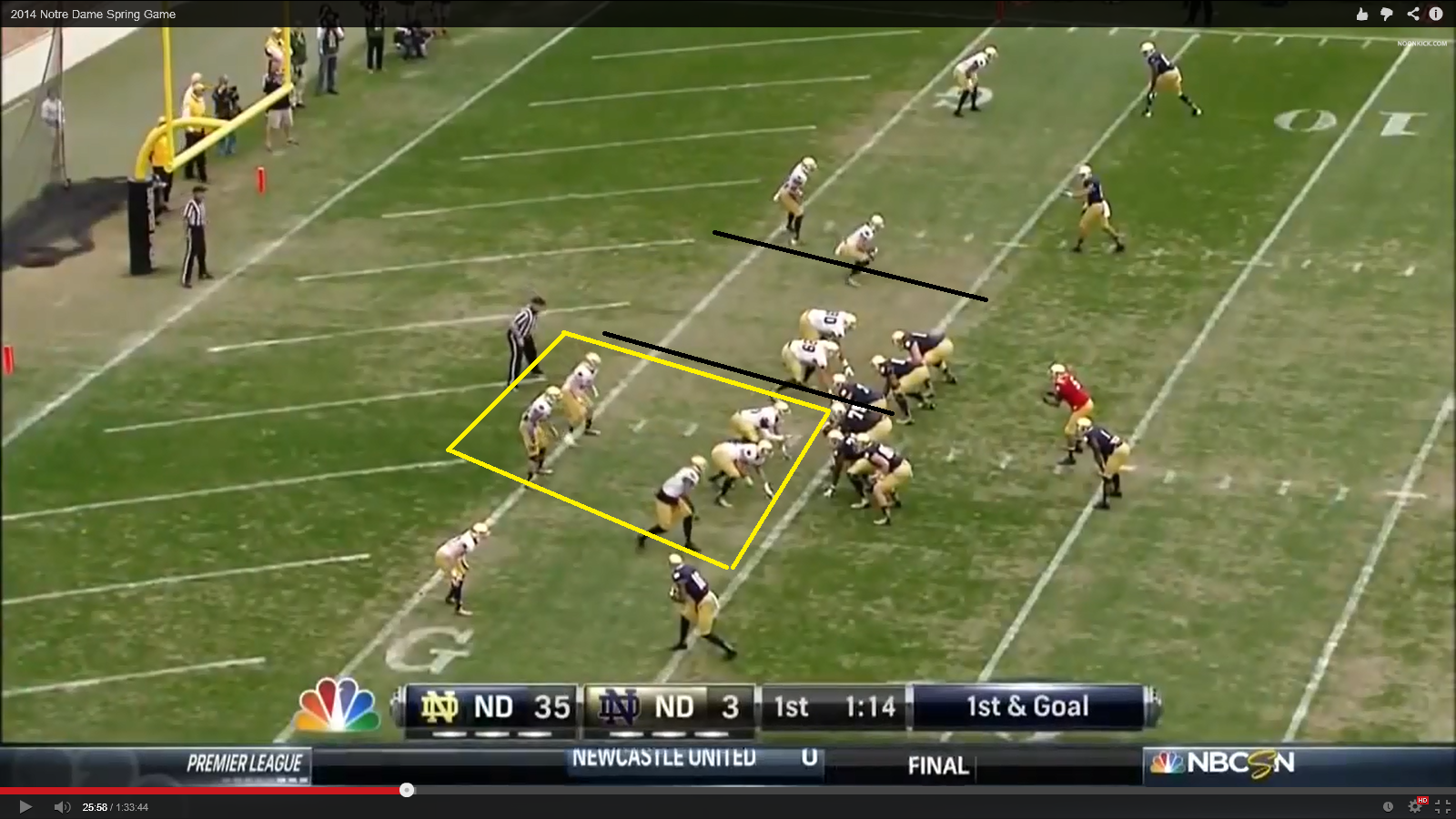 The Irish defense has overloaded one side of the formation with extra defenders (yellow box). Generally speaking, quarterbacks are taught to figure out where the extra defenders are and audible to run away from them. The decision-making process seems pretty obvious in this example. Run the ball away from the gaggle of defenders, toward the alley between the black lines, where the offense has a numerical advantage.

Of course, this thought process is exactly what coach Brian VanGorder is counting on. 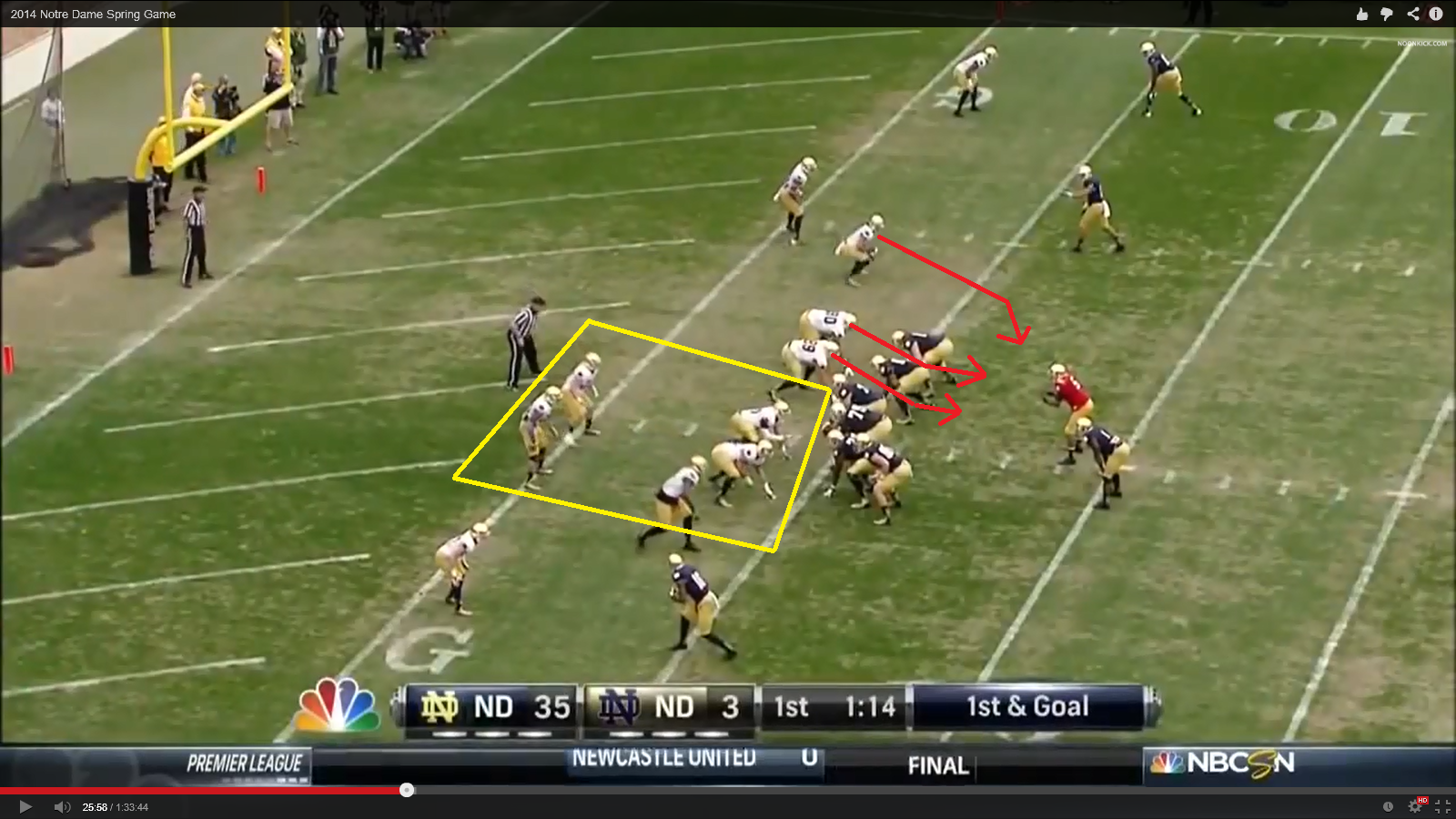 The trap is set. The offense will run away from the overload (yellow box), right into a blitz off the edge and two linemen shooting gaps (red arrows). If the defense can execute, this is a big play waiting to happen. 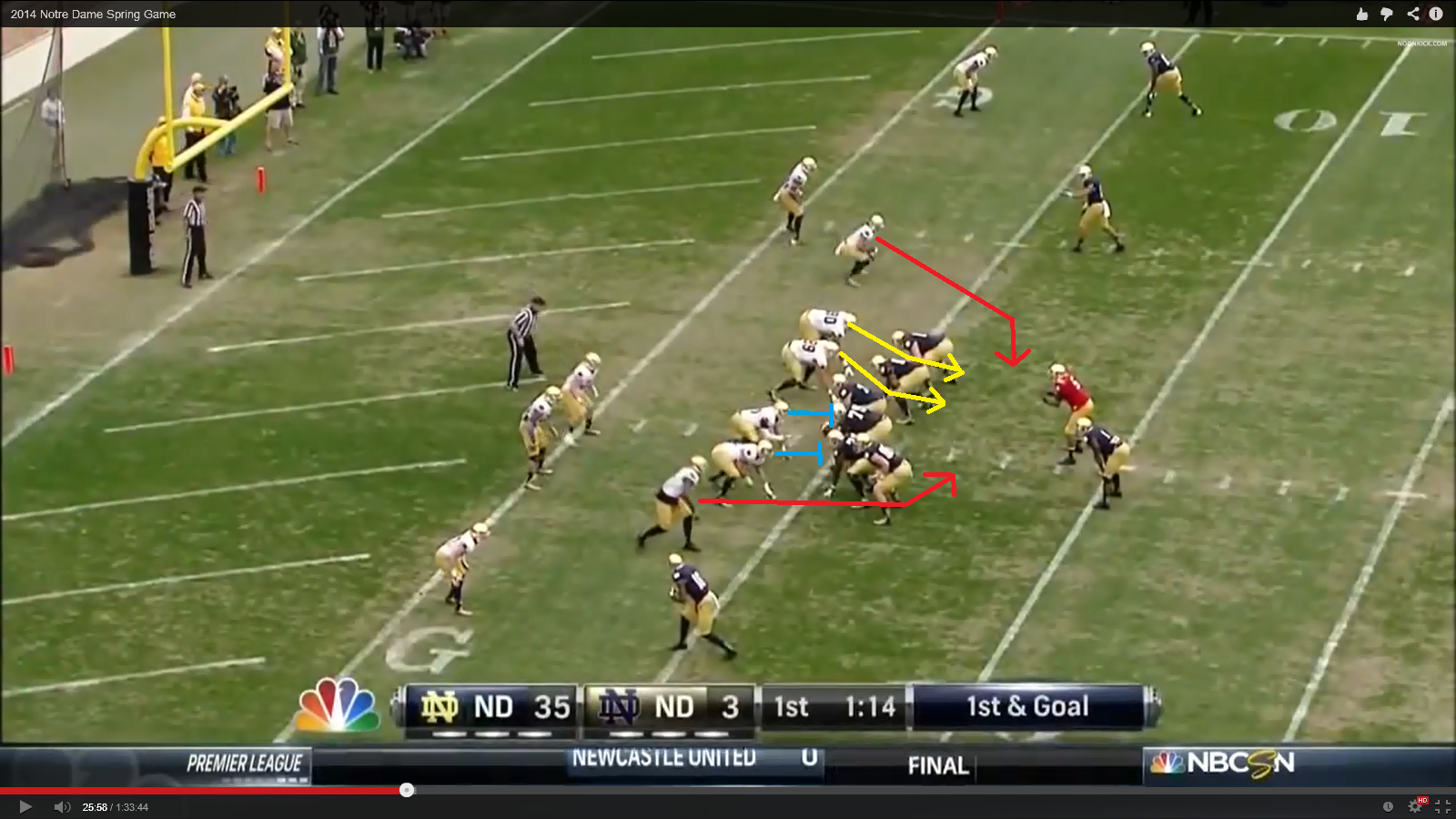 Matthias Farley (# 41) and Jaylon Smith ( # 9) will come off the edge (red arrows). Their responsibility is to force everything to the inside, or make a tackle if the play goes to the outside.

The D-line will use different techniques based on pre-snap alignment. Away from the overload, Jacob Matuska (# 89) and Isaac Rochell (#90) are shooting gaps (yellow arrows). Their job is to get into the backfield as quickly as possible and wreak havoc.

Anthony Rabassa (#56) and Chase Hounshell (# 50) are on the overload side; they aren't going to shoot gaps. Instead, they will engage the offensive linemen, read where they play is going, and then react (blue lines). We saw this read-and-react technique used frequently under Bob Diaco. The idea is to occupy the offensive linemen so they can't get to the second level and to have one defender take care of two gaps. In theory, this provides linebackers and safeties with the freedom to flow to the football, and it's a good technique to use if the ball carrier tries to cut back (away from the blitz). 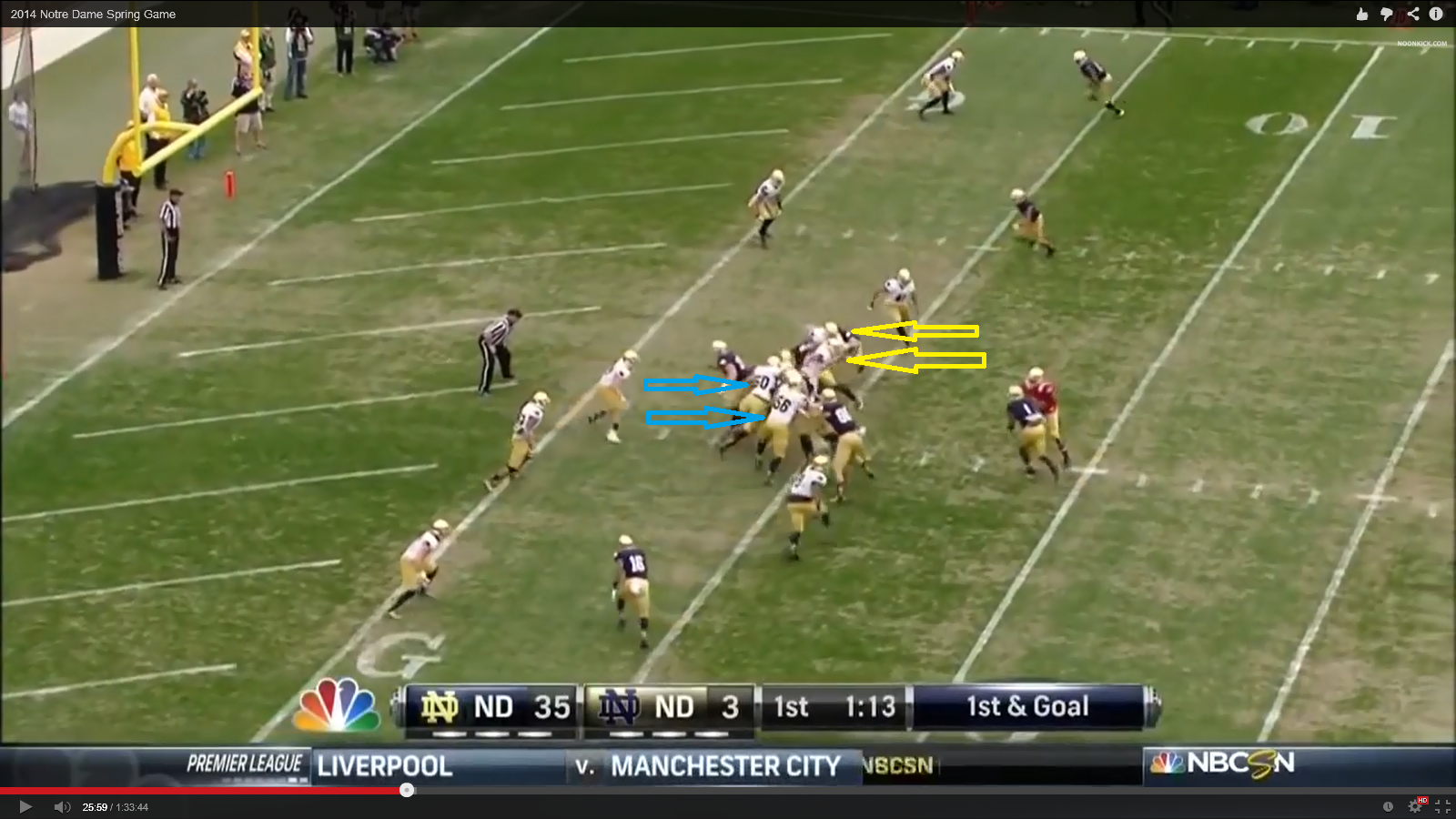 A fraction of a second after the snap. Matuska has beaten his man and is on his way to the backfield (yellow arrow). Rochell has made a move to the inside is on the same trajectory (yellow arrow). Both Rabassa and Hounshell have engaged the offensive lineman and are holding their ground. 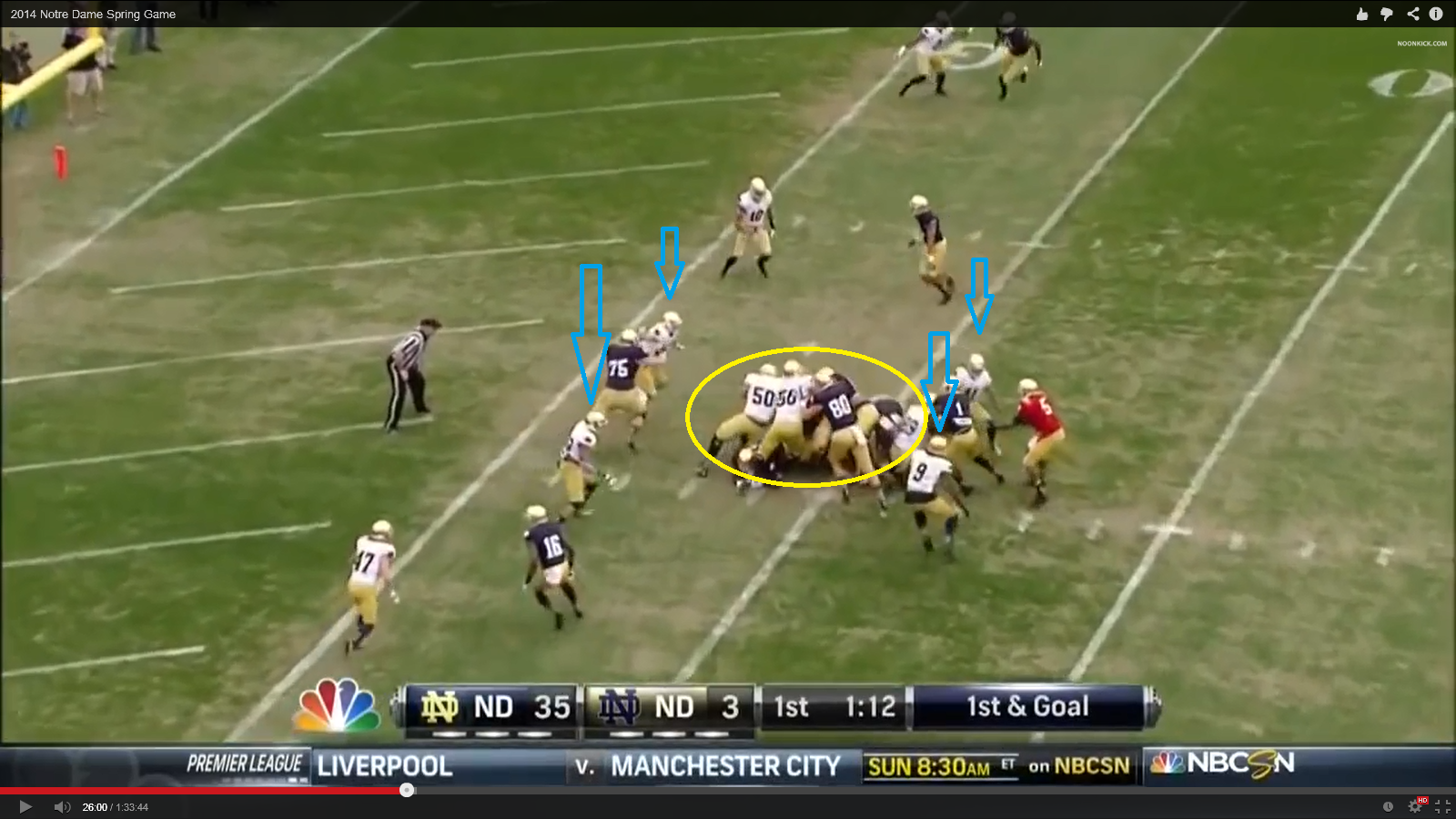 The Irish defenders do a nice job of removing any options for running back Greg Bryant (# 1). The middle of the defense is a quagmire of large human beings, wallowing like a herd of water buffalo in a rapidly evaporating watering hole (yellow circle). Not much room to run there. If Bryant makes a cut to the outside he will find four defenders (blue arrows) waiting to make a play.

When you watch the video, note how Matthias Farley disguises the blitz. If he shows blitz too early, the QB would likely audible into a pass and try and hit the quick slant over the vacated middle. It's about time we disguised a blitz. Well done.

I hope this is the type of defense we see from the Irish next year. It's aggressive without being reckless. Fundamentally sound without being conservative.