In any team sport, the possibility exists that you will have an odd-man situation. In lacrosse, those situations are times when execution is most important. Let's look at some of the options and examples.

In the ACC Semifinal game against Maryland, Irish middie Jack Near saw an opportunity.

Maryland middie Mike Chanenchuk was gimpy and moving slow. In a split-second, he failed to protect his stick, allowing Irish defenseman Garrett Epple to knock the ball to the ground.

Near left his man, picked up the ground ball and sprinted downfield with a Maryland player on his back hip.  Approaching the Maryland net, he passed to the most-open adjacent attackman, Matt Kavanagh, who buried it past Maryland goalie Niko Amato to win the game.

This play here is an example of a fast break, or "4 on 3" in lacrosse.  The idea is that, like basketball and other team sports, an odd-man situation is important to getting goals.

On your typical 4-on-3 situation, a charging middie will see this: 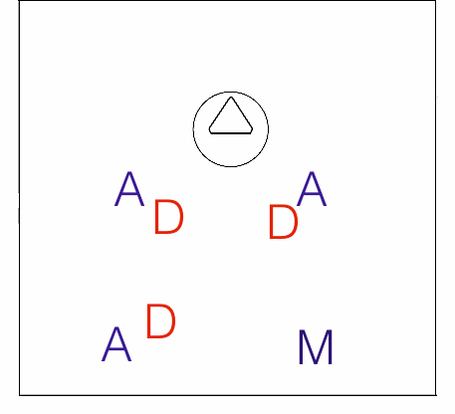 The attack is all guarded and the middie now has 4 options.  Let's take each one step by step and show real game examples of them.

Option #1: Pass it to the point 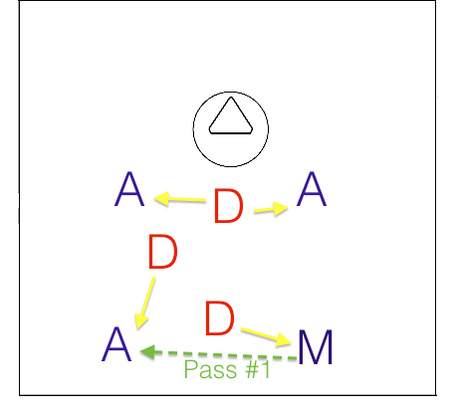 The "point" is the top-most attackman and is the most-common first pass. Since that defenseman is the closest to the middie without exposing the crease, he is the first slide.  The defenseman behind him will slide up and the 3rd d-man will split the two players, essentially hoping that the first two do their jobs.

Once the point-attack has the ball, he has a defenseman sliding to him, but two options to pass to with only one defenseman to guard both. So, he can shoot it himself if the slide is late or lazy, or dump it to one of the attackmen sitting on crease.

Here is an example of Option #1 during the Notre Dame vs. Denver contest from last season:

Notice how former Denver coach Jamie Munro noted that the most important element of a fast break is a good pass to a point man?  It can kill your fast break if you throw it too high or too far ahead of the point man, so he is spot on with that analysis. 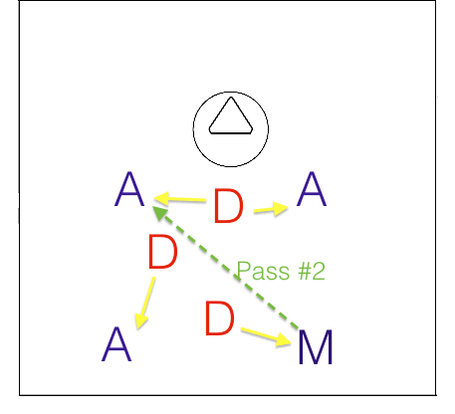 The Skip Pass can be more common in games than the pass to the point if you have a defense that slides too early.  The idea is that once the point-slide comes to the middie, if the second slide goes too soon, it leaves an attackman wide open on crease for an easy goal.

Here is an example from a high school matchup in the Washington Catholic Athletic Conference (WCAC) in the DC-area between Gonzaga (white) and Good Counsel (navy):

You can see that the GC defenseman went WAY too early to the point, putting a Gonzaga attackman right on crease for an easy pass and goal. 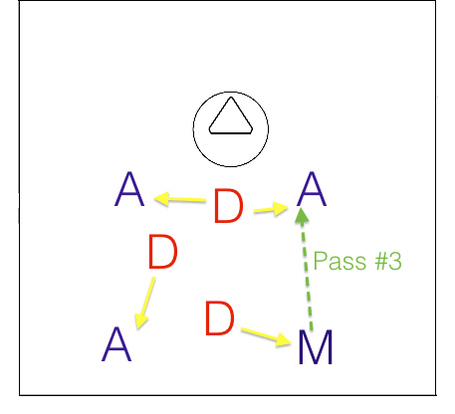 Typically the adjacent pass is the pass a middie would make if they have a "slow break" or if the fast break is well defended and the offense slows it down to set up substitutions or alignments.  In other cases, if the play is moving fast, the adjacent attackman can get a shot off and end up putting it on net for a goal.

Need an example? Look no further than the Kavanagh goal I was talking about at the top of this post!

Notice that Kavanagh gets the shot off fast and notice that the Maryland slides were borderline chaotic.  Given the amount of time left in the game, I'm guessing that Maryland's defense didn't talk to one another.  As a current lacrosse LSM/defenseman, the communication that you have with your goalie (who you will hear in games yelling "top right, shot, bottom left, etc.  Yes, that is the goalie) and the other defensemen can make or break your team.  Constant communication is key.  Since two defenders slid to Kavanagh and Murray slid way too late to Near, the lack of communication and sheer panic shows. 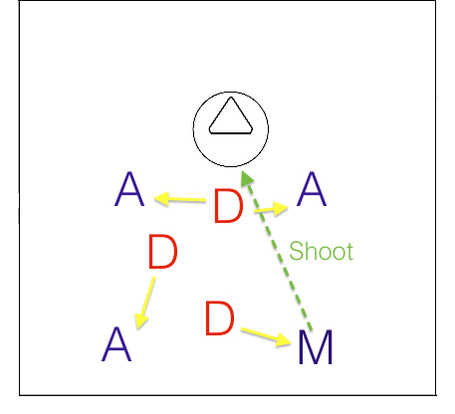 Every once in awhile, a middie on a fast break will enter the box and realize that there is no slide coming to him. As a result, he can shoot right away or drive and get a better shot on net.  This is a last-ditch option but can be utilized on a fast break.

The game-winning goal in the ACC Championship was an example of this:

Jack Near went down the field and the top-slide defender from Syracuse got caught flat-footed. Near drove and ended up scoring what would be the game-winning goal that put the Irish into the NCAA Tournament.