Hitting the Links: Brian Kelly Drops Some Info at a Golf Outing

Brian Kelly gave us some rare late-spring news items to digest this week.

Share All sharing options for: Hitting the Links: Brian Kelly Drops Some Info at a Golf Outing

Notre Dame head coach Brian Kelly was at a Kelly Cares Foundation golf event behing held at Olympia Fields just southeast of Chicago on Thursday morning. He had some things to talk about and luckily enough some reporters were there to tell us all about it.

When Notre Dame installs FieldTurf it will likely have an interlocking ND at midfield and the current style diagonal lines in the end zones.

This is what was expected with the new field being installed before the season and our poll in the Roundtable discussion from last week confirmed that the majority of folks favored this style. Kelly also mentioned that there might be shamrocks on each of the 35-yard lines where the ball is kicked off. That was also mentioned in our comment section as something worth trying out.

While it's far from an official, Kelly suggests stadium renovation may have a cut out in the north end zone for a view of Touchdown Jesus.

I don't think they'll be the kind of boards that will take away from our venue. (Re JumboTrons)

This was one of the more interesting tidbits from Kelly's talk because there is so much room for intrepretation. What kind of cut-out are we talking about? How big would it be? Will anything be placed in the space the cut-out makes? What's the idea for the video boards? Are we talking temporary boards for the next 4 or 5 years before the Crossroads project is finished? Where will they be placed? Since the Crossroads announcement it seemed like only one board in the south end zone was likely but will we see multiple boards?

I'm very much in favor of multiple video boards (preferably on in each corner) and against making a cut-out in the northern end of the stadium.

What's the ultimate goal of a cut-out? The argument is always framed that the 1996 addition "blocked" Touchdown Jesus but the view was always nearly completely blocked. 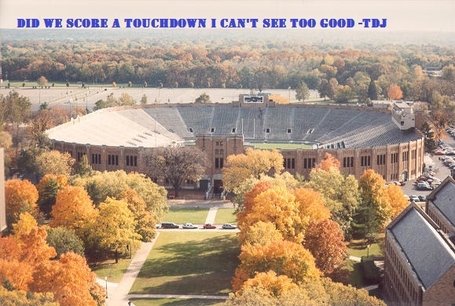 Yes, once upon a time on top of the roof of a college library pictures could be taken that showed a tiny slice of the football field. Is it sensible to take out a sizable chunk of the Stadium so that an inatimate mural can have a slightly improved but still largely blocked view of a football game?

Even with a stadium cut-out concept LIKE THIS how much does it really help the situation? The playing field is still far too low for Touchdown Jesus--if He were really a person who needed to watch the game oh this feels so silly--to see anything anyway. And if we want to make it easier for people to see TDJ in the stands what does a cut-out really do for the majority of fans?

Yes, in the old Stadium folks in the upper seats could see Touchdown Jesus and now some of them may have a partially or fully blocked view. Does that really matter if everyone in the new upper bowl after the renovation gained a view? I mean, there's really no way to get a sizable amount of people a better view without taking out a massive amount of seats. Essentially, a cut-out will give a view to the fans in the upper parts of the old bowl and only at the angles (south end zone looking straight toward TDJ, and some seats wrapping the corners) the cut-out would allow. 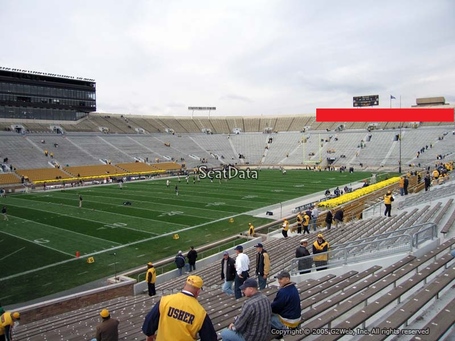 So some people would get to see TDJ's head. Is it really that important?

The rest of the upper bowl seats will still have the same view, except now there's a giant hole in the north of the Stadium. I don't know, maybe there's something exciting to be made out of a pavillion created by the cut-out? Perhaps a large open space could offer a "Touchdown Jesus Deck" that offers a great view for tours? Maybe there could be a decent-sized cafe built there with tables and chairs for students to use when the weather is nice? Maybe there could be a few row of seats in the front that mimic the Green Monster seats in a way? Maybe it would become the scenic place to conduct interviews for the coaches and players with lots of television spots up there? I might be able to be sold on a project with that kind of grand scope but just taking out seats, ruining the bowl symmetry, and making a huge change like that with a gaping hole just to give a couple thousand people a better view of the Library isn't worth it to me.

Brian Kelly will meet with head trainer Rob Hunt on May 22 for a medical update on Jarrett Grace. Status remains unclear.

This is the first update we've had in a few weeks with Grace. You have to think that if this upcoming physical is bad he'll be shut down for the 2014 season. Our attention may turn to whether he can get a 6th-year of eligibility in 2016. Also, Kelly mentioned again that Ben Councell could train at middle linebacker if Grace doesn't play this season.

Re Daniels Kelly said he's as talented as any receiver that he's ever coached but must walk a straight line when he returns.

The belief is that Daniels shouldn't run into any problems with his reinstatement process. That's certainly some high praise from Kelly on the talent of Daniels. Is it possible for DD to turn into a Michael Floyd-type of receiver this season?

It's the little things. They matter.

Kelly said Notre Dame is open to transfers and is considering some at the moment. The preference is they have 3 years of eligibility left.

Ever the politician, Brian Kelly isn't going to close the door on a certain transfer candidate from a certain rival school in California. Smart move.

Kelly might be trolling a little bit with the Michigan part. Interestingly, someone got into contact with Michigan AD Dave Brandon and he claims there have been no talks between the two schools. I guess that's to be expected since Dave Brandon has a hard time acting like an adult when it comes to talking about Notre Dame, and it would hurt his shriveled rep to admit that Kelly was right that Michigan is warming to scheduling the Irish again.

Oklahoma State football was docked practice time due to APR scores. Oh, by the way they open the season against Florida State good luck!

The NCAA finally allowed Boise State to help a homeless recruit who arrived on campus.

The ACC is talking about playing non-conference games against other ACC teams.

The ACC also announced a new logo this past week too.

The Pac-12 Championship has been played at the higher ranked teams campus but the corporate world finally won out and now the games will be played at neutral sites.

Rutgers dismissed a quarterback from their team after he beat the crap out of a person.

We now have footage of Jameis Winston stealing crab legs from Publix.

Michigan State and Arizona State have announced a series.

The Sun Belt is considering adding...UMass?

SB Nation has a great breakdown on LSU is so good at stopping the spread offense.

BGI: Hounshell relieved to make it through spring