The Helmet Helper: Fly By Night

It's the off-season and we're helping out other teams with new helmet designs.

Share All sharing options for: The Helmet Helper: Fly By Night

It sucks to have a crappy football helmet that no one likes. It's the most important item on an uniform and it needs to be done well. As Notre Dame fans we know all about this. However, some teams aren't as lucky. We're here to help these teams out and get some uni swag back in their lives.

Today we're rescuing a team that just so happens to be our first opponent for the 2014 season. The Rice Owls standard helmet is this which is yet another single letter helmet. Bonus points for a neat script but it's just not good enough. Neither is this alternate helmet introduced last year. How are you going to just straight up copy Oregon like that?

No, we're not going to sit and watch a team refuse to use an owl on their helmet. Rice used to have one on their helmet but foolishly got rid of it. I thought this school was supposed to be full of smart people?

We wanted a menacing owl. An intimidating owl. One that says, "Hey, I might stay up all night studying but when that ball is kicked off you better believe I'm going to hunt you down for copious amounts of tackles for loss." We turned North of the border for inspiration. Using the cover of Rush's 1975 album "Fly By Night" we found what we were looking for. That was the album in which drummer Neil Peart was unleashed on the world and now this helmet is ready to take the breath away of all of college football.

We worked closely with Larz to negotiate the rights to use the owl from Rush. No, Larz is not a copyright lawyer but as a Canadian he is given the right to negotiate on behalf of all artists in his country. A one-time fee of $4.73 American dollars didn't seem fair at first but we eventually decided we couldn't walk away from this project. 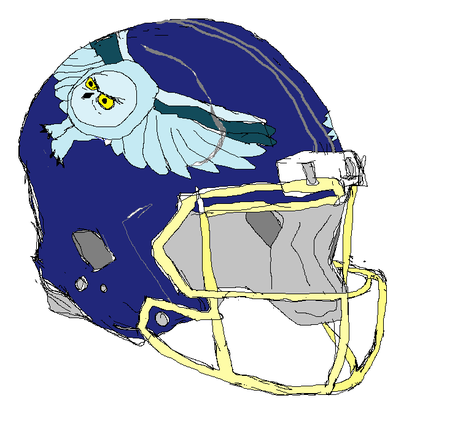 Even though it's not a school color for Rice we decided on a shade of yellow on the facemask. We did that to break up the dreary motonony of the blue-gray color scheme, of course, but also to help bring out the eyes in the owl which stare into your soul and demand respect.