A home opening stunner, Lou Holtz' last game, and the interception heard around the world. 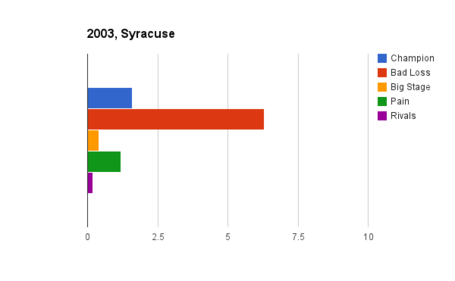 The horrible ending to the 2002 season gave way to a poor start in 2003. The Irish lost 6 out of their first 8 games and were destined for another poor season. Three straight wins in November did raise spirits in a small way though, especially a 57-7 blowout of Stanford in which Notre Dame racked up 320 rushing yards against head coach Tyrone Willingham's former team. Syracuse came into this regular season finale having lost 3 straight games and sat at 5-6 on the season.

Notre Dame's first ever trip to the Carrier Dome turned into one of the most lackluster and boring efforts in modern school history. Irish quarterback Brady Quinn threw an interception on the first series, the teams combined for 8 total turnovers, and Syracuse ended up out-gaining Notre Dame 456-261. Down only 10-3 at half, the Irish had the chance to re-focus but Syracuse piled on 21 points in the third quarter. Star running back Julius Jones was held to just 65 yards on 20 carries as the Irish laid down and were blown out on the road in the last game of the season. 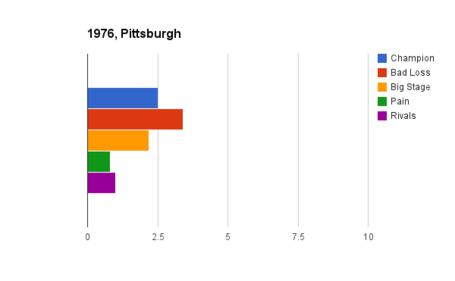 1976 was an important confidence season for second-year head coach Dan Devine. The team never came together in the first post-Ara season and didn't even attend a bowl game after finishing 8-3. Now, they got to start a new season against Pittsburgh--a team they had suffered their last loss in 1975 to on the road. The Irish had revenge in their eyes but the Panthers had Tony Dorsett. Notre Dame would score a touchdown on their first series but that would be the last time they entered the end zone on the afternoon.

A young Irish team slowly showed they were over-matched by Pitt. Following a stellar 303-yard rushing performance against Notre Dame the prior year it was Tony Dorsett who again lead the way with 181 yards on 22 carries. When this game was all over the Irish had suffered their biggest home loss in 13 years. The Panthers would go on to a perfect 12-0 record while being crowned National Champions. 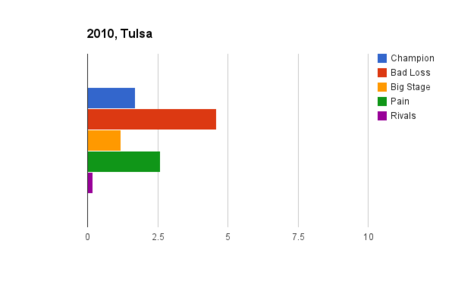 There may not have been a more emotional game and loss for Notre Dame in recent times than our #68 entry. A loss the previous Saturday to Navy was bad enough but the entire campus was in mourning following the death of Notre Dame student Declan Sullivan on the Wednesday of game week because of a tragic fall from a scissor lift. We wondered if the Irish would be able to overcome such grief against a Tulsa team that had one of the most explosive offenses in the country but it was not meant to be.

This game was one of the strangest to ever be played inside Notre Dame Stadium. Dayne Crist injured his knee on the second series thrusting true freshman Tommy Rees in at quarterback. Notre Dame scored on a hook-and-ladder play. Tulsa recovered a muffed punt by John Goodman. Notre Dame perfectly executed a fake punt for a first down. Rees threw a pick six but also ran for a first down. Tulsa attempted a 2-point conversion in the second quarter and failed. Notre Dame gave up a punt return for a touchdown. David Ruffer hadn't missed a field goal all season but had a PAT blocked and taken back for 2 points in a game that was won by a single point.

And of course the game ended on a controversial interception in the end zone that's been dissected as much as the Zapruder film. 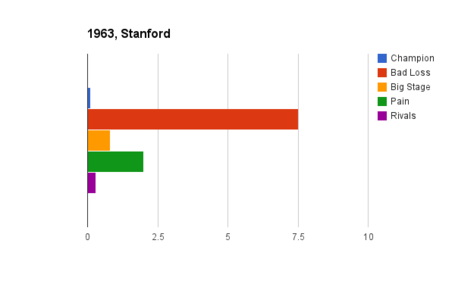 1963 would not be a fun year for Notre Dame fans. Somehow the team had defeated both USC (defending National Champions) and UCLA in South Bend after dropping the first two games of the season so the depths of despair hadn't been quite evident yet when the Irish traveled to Palo Alto to take on 1-4 Stanford coming off their own 4-game losing streak.

With the Four Horsemen in attendance as guests of the Stanford Alumni Club, the Irish raced out to a 7-0 lead and even led at halftime 14-0. The second half belonged to Stanford as they scored all their points in the last two quarters and held Notre Dame to just 4 first downs. After trying to turn their season around with big wins in the prior weeks the Irish lost as 14-point favorites to a team that would finish 1963 with a 3-7 record. Not that the Irish would be any better. This was the first of a 5-game losing streak that ended with a 2-7 overall record for Notre Dame. 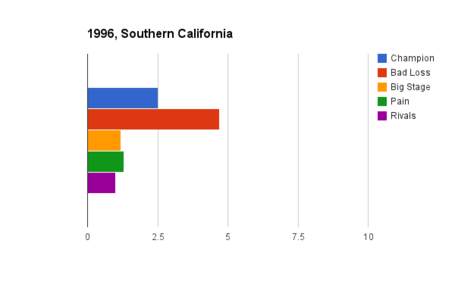 The Lou Holtz Farewell Tour had a couple hiccups along the way but heading to Los Angeles for the regular season finale the Irish were poised to send off their coach the right way. Notre Dame came in winning 4 straight games--including a combined 122 points in wins over Pitt and Rutgers leading up to the USC game--and had a major bowl bid on the line with a 8-2 record. Meanwhile, the Trojans were 5-6, had lost 3 straight, and were still carrying the stigma of not having beat Notre Dame in the last 13 attempts.

Notre Dame led 14-6 after the third quarter and even briefly knocked out USC quarterback Brad Otton from the game. However, Otton would return and the Irish would collapse in the fourth quarter. Allen Rossum fumbled his second punt of the game and it set up an easy USC touchdown. The Trojans went for two and missed. Led by Autry Denson, the Irish answered with their own touchdown to make it 20-12 but missed the PAT to keep it a one score game.

USC fought back on the next drive and scored a touchdown and successfully converted the 2-point conversion this time to even the score at 20-20. Notre Dame couldn't move the ball next and the game headed to overtime. In the extra frame the Trojans scored first and then held Notre Dame to just 1 yard on four snaps as Ron Powlus' pass was batted down on fourth down to ensure the USC victory and upset. Lou Holtz never coached at Notre Dame again.