The Fighting Irish will gather on a depleted grass field to scrimmage and end spring ball.

Proceeds from the game help support the scholarship fund of the Notre Dame Club of St. Joseph Valley.

The Notre Dame Club of St. Joesph Valley will conduct a silent auction during brunch.

Two years ago a crew of our writers met up in South Bend for the spring game. Last year, we saw Irish Chocolate take the reigns on offense for a brief but memorable play. What's going to happen this year?

1) The Progression of Malik Zaire

It's hard to believe this will be Everett Golson's 4th spring game at Notre Dame. Although plenty of eyes will be on No. 5 he comes into this game with a ton of experience in this event and while we may scrutinize some of the small things with Golson I think we all know pretty much what we're going to get out of him right now. Through 3 Blue-Gold games he's gone 26 for 46 (56.5%) with 309 yards passing, 3 touchdowns, and 1 interception.

Barring something unforeseen this will be Golson's offense come fall. However, the spring game will be a good measure of where Malik Zaire stands with his progression as he ends his second spring in the program.

Last year, Zaire started off shaky in the spring game. He didn't get any snaps until the second half and took two sacks and threw an interception in his first two series. Still, it was nice to see him shake that off and finish up the game connecting on 4 of his last 5 passes including the game's only touchdown to C.J. Prosise.

Pocket presence, mechanics, and accuracy are all going to be watched carefully with Zaire. Can he show us that he has legitimate starter passing abilities? Will he make good decisions with the ball? Last year he took 4 sacks for -31 yards during the spring game (Golson took 3 sacks for -29 yards too, which is funny given how well the line pass protected in the fall) and I'm curious to see if Zaire avoids those losses and shows off some of his athleticism in the run game.

2) The Improvement of Greg Bryant

It's been a while since we've seen the coaching staff consistently beam about a player like they've been doing all spring with Bryant. Even though everyone loves to hand out a Junior Jabbie award after a big spring game the truth is that a big performance on this stage typically indicates a good year is ahead for a player. For example, running back Cierre Wood ran for 110 yards on 10 carries in the 2010 Blue-Gold Game as a rising redshirt freshman and went on to a big first season in an Irish uniform.

We're expecting some big things out of Bryant this year and that means seeing some flashes this weekend.

There is a lot of concern about Notre Dame losing two mainstays on the left side of their line in Zack Martin and Chris Watt. Those two combined are leaving behind over 90 career starts. Yet, due to some injuries the Fighting Irish are only poised to break in one offensive lineman without any game experience.

With Ronnie Stanely moving over to left tackle and Steve Elmer solidifying that side at left guard there doesn't appear to be anyone really pushing hard to compete with McGlinchey. Therefore, we should get a good long look at the likely new starter on the line during this game. I'm sure McGlinchey has the athleticism to do well in pass protection but I'm curious to see how well he picks up blitzes and handles his business in the run game for such a tall tackle.

4) The Role of the Slot Receiver

This should be the first season in a while where 3-receiver sets are the norm. C.J. Prosise and Amir Carlisle have been the work horses in the slot this spring and it should be interesting to see how they're used in this game.

Carlisle especially will be someone to watch. He's finishing up his third spring at Notre Dame and will be playing only his first Blue-Gold Game due to past injuries. For someone who clearly lost confidence in the middle part of last season a productive spring game could go a long way for Carlisle.

We've spent quite a bit of time talking about the new defensive scheme and the spring game will be our first live look at what Brian VanGorder has in store for this season.

Jerseys are ready for the spring game #GoIrish pic.twitter.com/jaCu3Okq8X

Of course, this game is usually pretty vanilla from a scheme standpoint and that is duly noted. However, there will be some small wrinkles and players asked to take on some new responsibilities. We're also expecting some new looks with some blitzes and especially in press coverage at corner. You can expect we'll watch this stuff like hawks.

6) Development Along the Defensive Line

Interior tackles Sheldon Day and Jarron Jones are on different levels of known quantities, but they are known quantities nonetheless. We're focusing on the depth along the line beyond these players.

Is Chase Hounshell on pace to become a steady backup? Can Justin Utupo hold up at his size and provide more minutes than Tyler Stockton gave us last year? What kind of physicality does Matuska bring with all his extra weight? Is Isaac Rochell ready to push for starter minutes?

The pass rush on the edges will also be something to watch too. Not a ton of bodies out there so we'll see how the likes of Ishaq, Okwara, and Rabasa generate pressure on their own.

7) The Ascent of Joe Schmidt

Joe Schmidt was never supposed to be in this position. He was only supposed to be a helpful body in practice. At best, a placeholder for other bigger, faster players to come. Yet, it looks like Schmidt is not going anywhere anytime soon.

He's been the starting Mike linebacker for the entire spring and impressed the coaching staff with his smarts and respect from his teammates. Schmidt played pretty well last year on passing downs but it remains to be seen if he has the size and physicality to truly remain a true 3-down player on defense.

KeiVarae Russell is the undisputed No. 1 corner on this team and maybe the No. 1 player on defense as well. Cole Luke is probably the undisputed No. 2 corner and Brown, Atkinson, or Farley do not appear to be challenging for that position right now.

Still, Luke is expected to take a big step forward this season after not playing a ton of minutes as a true freshman in 2013. Factor in the more aggressive defense--which will likely put the most pressure on the corners--and there will be a big spotlight on Luke's game this Saturday.

We were expecting a circus of bodies and competition this spring. That's not what happened. Two-year starter Matthias Farely moved to corner, Nicky Baratti spent the majority of spring unable to participate in contact, and Elijah Shumate has been bothered by a nagging leg injury for the past couple weeks.

If you're starting an entire spring it's typically a sure thing you'll be starting in the fall which means Collinsworth and Redfield might be the 2014 Irish safeties. For a positional unit that was mostly terrible in 2013 it'll be heartening to see both of these likely starters doing some good things in the spring game.

There doesn't have to be just one player. Several athletes could come through with really strong performances. My guess is that Amir Carlisle is the surprise player of the Blue Gold Game. He might not necessarily be a surprise player per se but as I mentioned above he really needs to get his confidence back and should play a ton of minutes on Saturday.

I could see him catching 5 or 6 passes and getting a couple carries as well.

Unveiling of The Shirt 2014 (4 PM ET outside Hammes Bookstore) 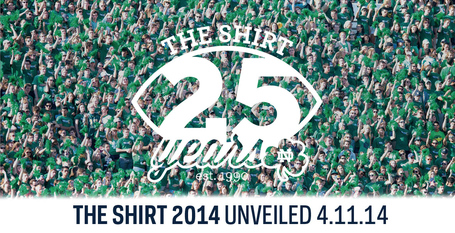 Thanks so much for helping us exceed 3000 followers! Inside scoop: This year's shirt features an original phrase coined by a Shirt member!