The Irish were outclassed by the defending National Champions as they move to .500 and a short rest before an important contest against Marquette. Let's look at Duke's defense against ND's best offensive threat.

The old cliche saying in sports is that offense wins games, but defense wins championships.

The #3 Duke Blue Devils showed a little bit of both against the Irish on Saturday.

The game started promising, with Liam O'Connor easily winning the opening faceoff over Duke FOGO Brendan Fowler. It went quickly downhill from there.

Class and Wolf combined for the first 7 goals of the game for Duke, and the Irish had little answers for them.

Notre Dame started the game with top-defenseman Stephen O'Hara guarding the Tewaaraton Trophy frontrunner in Wolf, but looked in-over-his-head at times. Garrett Epple, who was guarding Josh Dionne (2g, 0a) switched with O'Hara and was more effective. However, neither Irish LSM, Henry Williams or Chris Prevoznik, were able to keep up with Deemer Class, who continuously found space in the top box for high-percentage shots.

Offensively, Notre Dame got a solid performance from Conor Doyle (1g, 3a) for the second straight game, and the Irish 2nd-Line of middies stepped up, but there wasn't much past that.

Attackman Matt Kavanagh was held pointless for the second game this season, as Duke defenseman Henry Lobb effectively shut him down for the entire contest, and forced 4 turnovers out of Notre Dame's top offensive threat.

With the Irish down 6-2, Coach Kevin Corrigan opted to switch goalies, putting in Conor Kelly for Shane Doss. Neither were particularly effective, but it didn't matter.

I indicated in my game preview that there were weaknesses in Duke that the Irish would need to exploit in order to win, and basically gave a game-formula into how Notre Dame could pull out a win.

Let's take a look at how the Irish handled each component:

The Irish got more GBs in the first quarter, but were blown off the ball in the 2nd and 3rd. The 3rd (10-4) was particularly brutal, and it reflected on the scoreboard.

Take Jordan Wolf out of the game

Didn't happen. Wolf had 4 goals and added 3 assists. He was a menace in the Duke offensive end and Notre Dame's defense struggled to contain him.

This was a great comeback game for O'Connor. Liam took all 25 faceoffs of the game and won 15 of them and committing 2 violations. He had one bad quarter though, going 2-7 during the disastrous 3rd quarter.

As an aside, I love midwestern lacrosse. I do. I used to coach youth lax in the Michiana area. However, I still find that midwestern lacrosse refs are much more inconsistent than their east coast colleagues when it comes to faceoff cadences. One of the violations by O'Connor occurred when the ref kept the players down for way too long. Unfortunate. Still, a decent game by the Irish Faceoff Specialist.

Where do I begin? The Duke 1st line completely outplayed the Marlatt-Perkovic-Brosco line. Class had 5 goals and 2 assists, Christian Walsh had a goal and three assists and Myles Jones had two scores. Yikes. There are some bright spots. As I wrote earlier, the ND 2nd line did a solid job, only giving up one goal and scoring three. The top line struggled mightily though.

3rd Attackman needs to step up

Scioscia had a goal as the starting 3rd attackman, but also had a technical foul penalty and a turnover. I was hoping that Scioscia would have had a 2-goal, 2-assist statline, but like the rest of the Irish offense, he struggled to find points.

Zero goals. Zero assists. Four turnovers. Kavanagh had some decent rides, but let's face it. He didn't have a good game.

The Irish have a short week coming up. They travel to Marquette on Tuesday and face Robert Morris the following weekend. They'll need to regroup with this group of games and avoid any injuries heading into their now-important ACC contest against Maryland.

However, in the event that the Irish fall to Maryland, and by virtue of the remaining games, ND is still in the ACC tournament. Because North Carolina beat Virginia Saturday, the Hoos fall to 1-3 in the ACC and face Duke next. Mathematically, they are eliminated. Even if they beat Duke, at 2-3, they lose the tiebreaker to ND. On the flip side, Syracuse, also 1-3 in the ACC, hosts UNC on April 12. If UNC, 2-2 in the ACC, wins, then the Irish are the 3rd seed. If they lose, then Syracuse gets the 3rd seed and the Irish are 4th and Carolina is watching from home.

Part of what made the win so complete for the Blue Devils was taking Kavanagh out of the game. Duke called on defenseman Henry Lobb to do so, and he did his job.

Part of what makes Kavanagh so dangerous is his ability to be elusive on goal-line-extended, or GLE. The GLE is the line even with the goal. The task of a defenseman guarding an attackman is to get him behind GLE. An attackman behind GLE is an attackman who can't score.

Let's take a look at one of Duke's takeaways from Kavanagh at GLE.

The first thing I want to show is Lobb locking-off Kavanagh below GLE. When you see something like this, it is deliberate. It basically means that Duke was saying to ND that Kavanagh was going to be covered everywhere. 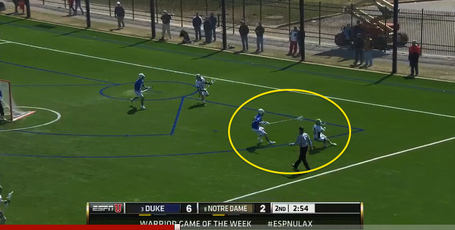 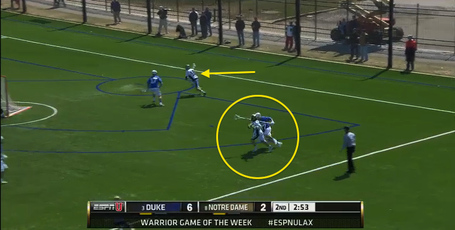 Highlighted in the yellow circle, you can see Lobb closing off Kavanagh WAY below GLE. Conor Doyle, the ballcarrier, has to roll back to the other side of the field because Lobb is guarding him so closely. 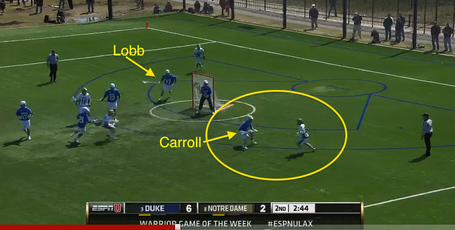 But due to Duke being in a slide-rotation, Lobb slides to Doyle later in the play so Casey Carroll is on Kavanagh, who finally has the ball in his favorite spot at GLE and driving on net. Carroll is in a perfect defensive stance. His body is angled towards GLE, forcing Kavanagh behind the goal and preventing him from turning upfield.

Both players are fundamentally sound here. As Kavanagh drives on Carroll, he is setting himself up for a roll dodge. His stick is away from his body as he plants his foot to roll out towards the goal and giving himself more space to maneuver. Likewise, Carroll breaks down from his stance and does what every defenseman is taught in this position: push below GLE. I'm also gonna mention that crease defenseman. It's Henry Lobb. See how close he was on Kavanagh? Look at how much space he is giving Doyle, who is in the back corner. 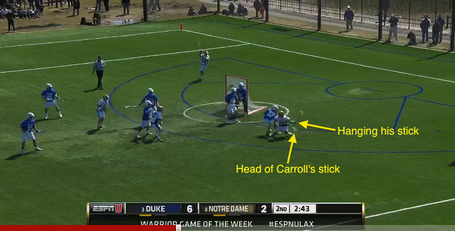 Kavanagh makes a major mistake on his roll dodge. When an attackman rolls, they are taught, above everything else, to protect their stick. That means as you roll, you carry your stick with you. Here, Kavanagh rolls, but leaves his stick hanging. You can see the faint blur of Carroll's stickhead as he is about to throw a lift on Kavanagh's stick. 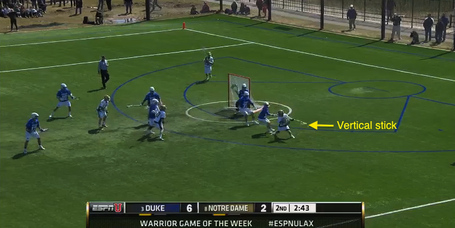 It worked. Carroll lifts Kavanagh's stick, making it vertical and popping the ball out. You can see Lobb closing in from crease recognizing the check and ground ball opportunity.

Textbook man-ball situation for Duke. Carroll has Kavanagh tied up so Lobb gets ball and gets the GB for Duke. Irish offensive attack stopped.