The Irish lacrosse team will have their hands full as they host the defending national champions in South Bend.

Typically, when a team is coming off a championship season, there are pitfalls that affect the team's performance. Take, for example, the Baltimore Ravens in the NFL. The Ravens, fresh off a Super Bowl victory, couldn't even make the playoffs the following season. Player attrition, injuries, and a more competitive schedule played a major role.

But sometimes, in rare cases, a team actually improves off a championship season.

The Blue Devils, as I wrote in my preseason primer, I fully expected to compete for a National Championship as they are better this season than they were last season. For once, my prediction has held up.

Duke (9-2), returns an arsenal at attack. Jordan Wolf (33g, 16a) might not match last season's totals as the offense has shared the wealth, but he is still the team-leader in goals. Not far behind him is teammate Josh Dionne (26g, 5a) and Case Matheis (12g, 10a). The next-man in is Chad Cohan (4g, 8a) who started the first game of the season against Jacksonville and last week against Harvard in place of Dionne, who didn't play.

The midfield is equally as impressive. Candidate for Lax Bro Name of the Year, Deemer Class (18g, 18a) leads the Blue Devils' top line. As a Sophomore, I expect Class to be one of the top middies not just this season, but for the next few years as well. Joining him on the top line are Christian Walsh (12g, 11a) and as of late, Myles Jones (18g, 5a). Jack Bruckner (3g, 3a) is the next-man in and started four games this season. The scariest thing about Duke's midfield? They only have two contributing Seniors. The rest are underclassmen, and they're good.

Defensively, Duke plays a platoon of longpoles that are anchored by Seniors Chris Hipps and Casey Carroll. The third longpole has alternated between Henry Lobb and Jamie Ikeda. Duke Coach John Danowski has also played Luke Duprey as well. Outside of Duprey, who has 8 penalties on the season, the rest are quite disciplined. Hipps and Carroll have 6 penalties between them. This will be a really tough matchup for the Irish attack. Carroll is a little leaner at 6'0 than Hipps' 6'4 frame so I wouldn't be surprised to see him matched up on Kavanagh while Hipps takes Doyle.

Despite the horrid stats, Syracuse FOGO made a show of Liam O'Connor in their game over the weekend. If O'Connor has a game against Duke's Brendan Fowler like he did against Daddio, the Irish will be in big trouble. Fowler has taken the clear majority of faceoffs for the Blue Devils and is among the nation's best, ranking 63% from the faceoff X. After reviewing some film of Fowler, here is a brief screengrab of one of his faceoff wins: 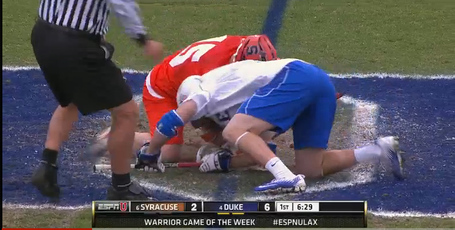 Pretty much the same stance as Liam. So, on the plus side, Fowler won't be jamming O'Connor and it will be a "who has the faster clamp" race but on the downside, based on Fowler's stats, he's pretty good. O'Connor will have his work cut out for him. Ossello, too.

In net, the Blue Devils relied on Kyle Turri after Dan Wigrizer went down with an injury and Turri led them all the way to the Championship. And while Turri has started a couple games this season, Sophomore Luke Aaron has played the most games and started the most. Aaron's 56% save percentage and 8.5 goals against will be a tough challenge for the Irish.

I was way off on my prediction last week. I believed that the Irish had a legitimate shot at beating the Orange and essentially locking up an NCAA bid. Instead, the Irish got bottlenecked and lost in a fashion that, frankly, surprised even me.

Duke is not Syracuse. Duke walloped Syracuse the week before the Irish faced them. Duke has buried most teams this season, winning by at least 4 goals in 7 of their 9 wins. Their losses are to the #1-team in the nation (Loyola) and the #4 in Maryland, so not bad outside-Top 20 losses like the Irish have (Penn State).

Duke has a powerful attack that can score at will when put in one-on-one situations. They have a fast and young midfield that isn't afraid to shoot. They have a FOGO that is one of the best in the country and they have a disciplined defense that can take players out of games.

However, there are weaknesses.

Both Loyola and Maryland beat Duke by getting more ground balls, taking Wolf out of the game, playing 50-50 at the faceoff X and neutralizing the Duke midfield.

The Irish have that capability.

If O'Hara and Buglione can force Wolf and Dionne out of the game and put the onus on the Blue Devils midfield, the Marlatt-Brosco-Perkovic line MUST step up and stop the Duke top-line. Doss needs to have a strong game because he will see a lot of shots, as Duke will routinely chuck about 40 or so shots on net.

Duke can be penalty-prone with specific players, and the Irish will need to exploit that. Whomever plays as the 3rd attackman (Hopkins or Scioscia) will need to step up. That said, Kavanagh has to make plays. Being limited to 2 assists against the Orange killed the Irish.

Duke and Notre Dame have a recent history together. The Blue Devils thwarted the Irish's bid for their first national championship in 2010. The Irish beat them early in 2011 only to lose to them in the NCAA Quarterfinals. Last season, the Irish beat the Blue Devils early, just like 2011, and fell again in the NCAA Quarterfinals.

For the first time, they now face each other as conference foes. Duke has already locked in an NCAA at-large bid at the very least. At 4-3, the Irish don't have that luxury yet. A win over Duke would likely seal it.

I wrote in my preseason primer that this stretch of games would easily be the most difficult. The Irish answered the call in a road contest at Ohio State. They came up short against the Orange. What they do against the defending national champions? Well, we'll have to wait and see.