There's an old philosophy in coaching that says you run the ball at speed and run away from size. I suspect that opposing coaches will apply this philosophy to Jaylon Smith when he plays inside linebacker this fall.

Smith was moved from the outside to the inside (at least some of the time) during spring practice. The rationale for this move? Being in the middle of the defense will allow Smith to use his speed to make plays from sideline to sideline. While I like this switch, it does come with some risk. By moving Smith to the inside, it's easier for teams to neutralize his speed by running directly at him.

Let's take a look at a couple of plays from the Blue and Gold game that show Jaylon Smith using his speed and having it neutralized. 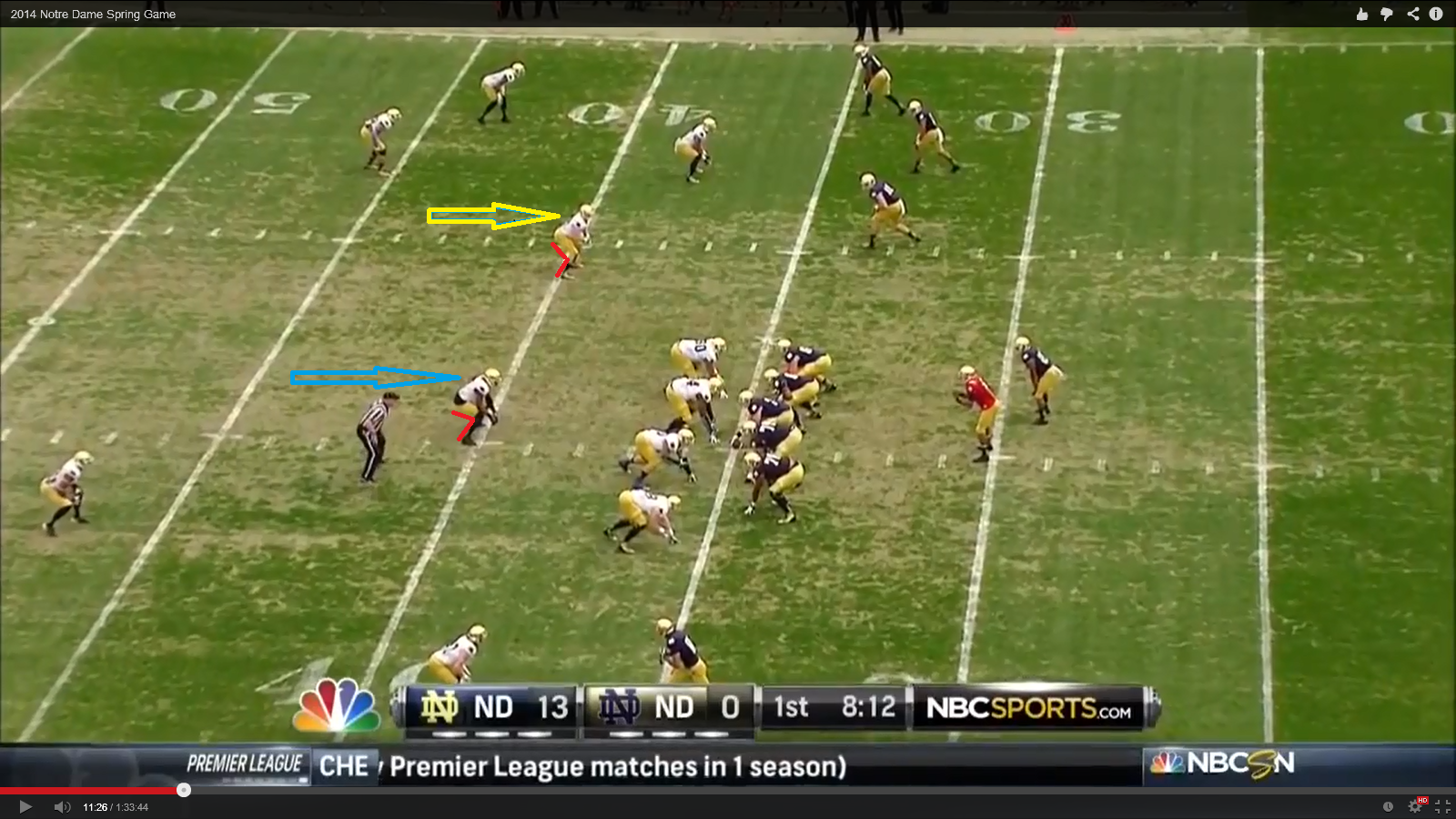 On this play, Jaylon's problems start before the ball is snapped. His stance makes it difficult to react quickly versus the downhill run game.

Joe Schmidt # 38 (yellow arrow) will serve as a contrast to Jaylon Smith # 9 (blue arrow). Schmidt has a rock solid stance. He has appropriate bend in his ankles, knees and hips (red line). This allows him to get weight on the balls of his feet so he can come downhill quickly.

Smith on the other hand has too much bend in his knees (red line). He looks like he is doing squats. This means his weight is too far back and will result in a slower reaction time to inside run. 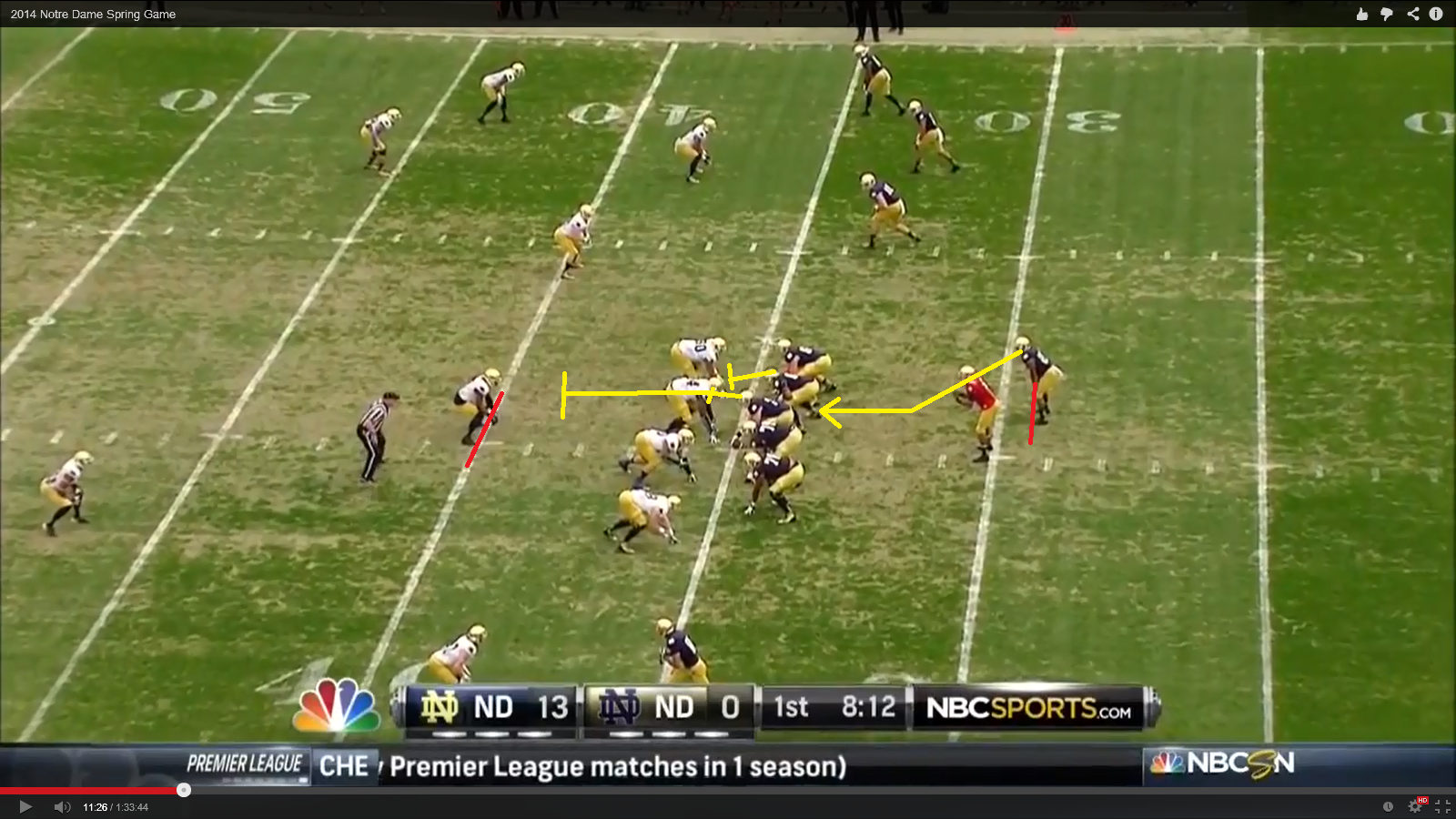 The play will come directly at Jaylon Smith. Center Mark Harrel (#75) will block the defensive tackle and then make his way up to Smith. Running back Tarean Folston (# 25) will follow behind his big center.

Note the red lines marking where Smith and Folston line up pre-snap. 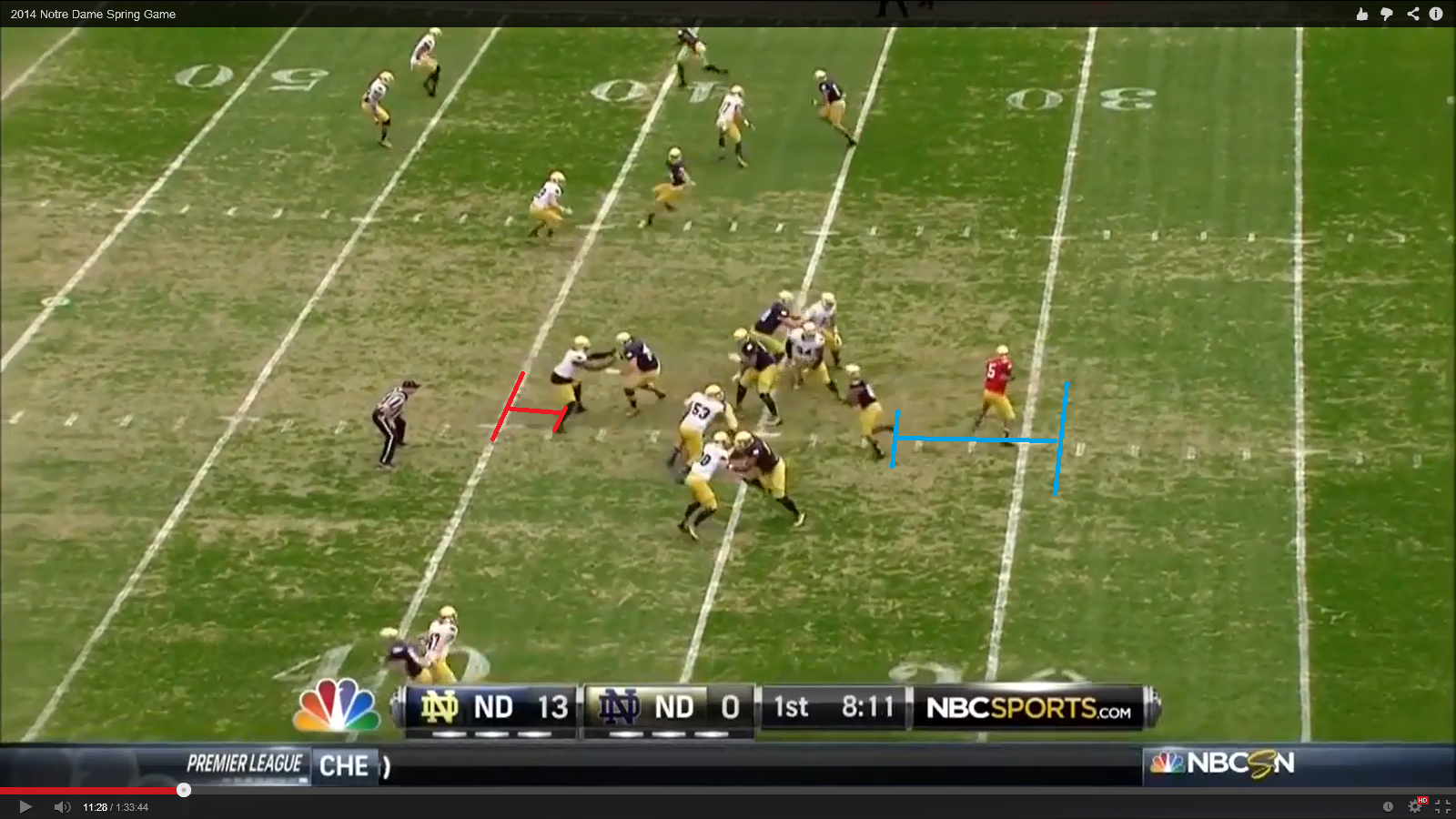 A combination of slow play recognition and poor stance means that Smith has only moved about 1 yard, while Folston has traveled almost 4 yards. To make matters worse for Smith, a 305 lb center has also had about a 4 yard run at him. This isn't a great position to be in. 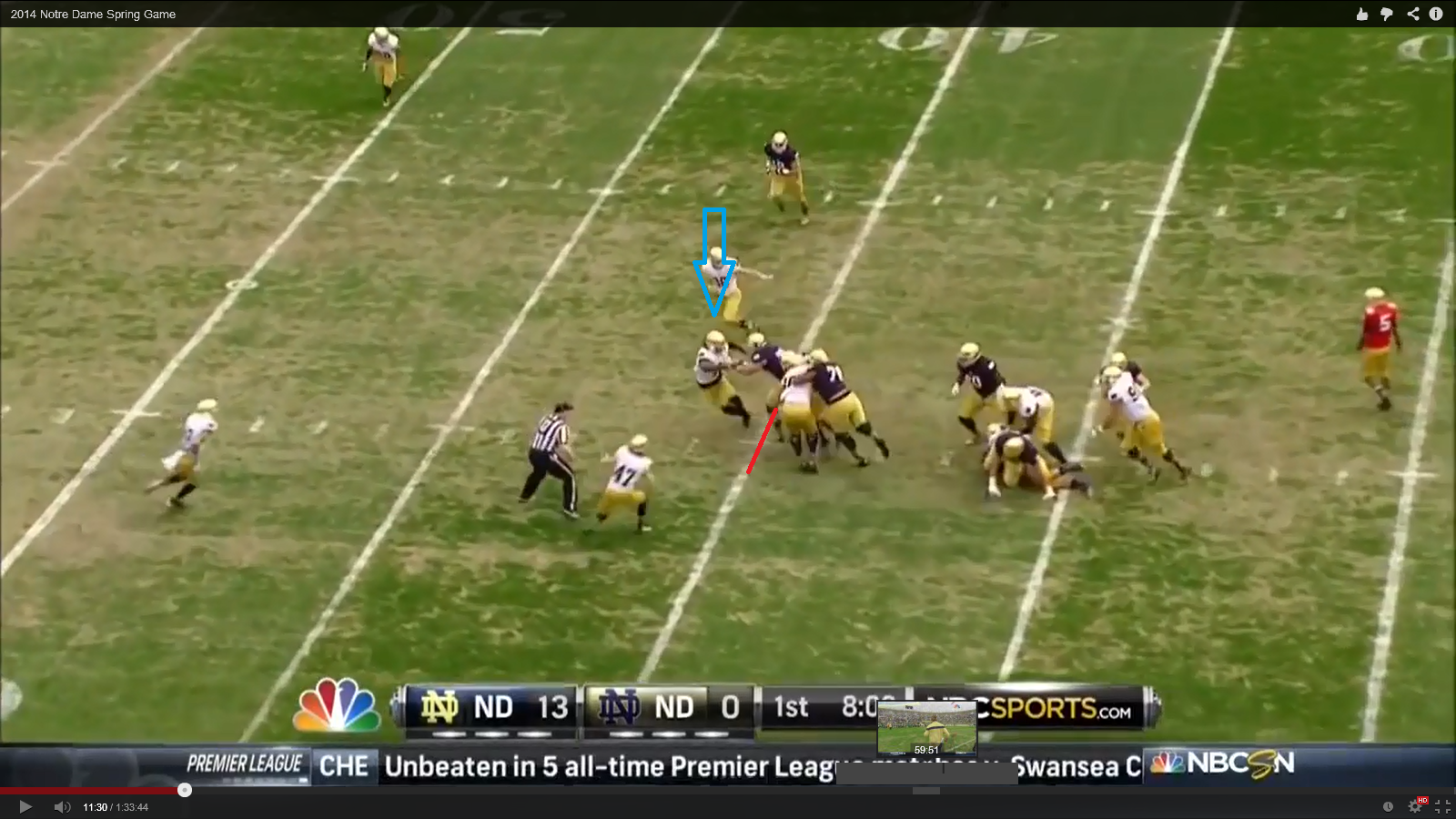 This is something that will need to be fixed this summer and through fall camp. Jaylon Smith doesn't need to be the second coming of Dick Butkus when it comes to playing the inside run. He just needs to be competent. To do this, he will have to fix his stance, and become more comfortable reading keys from the inside.

Take a look at the video and you'll see how hesitant Smith is on this play.

Running away from Jaylon Smith 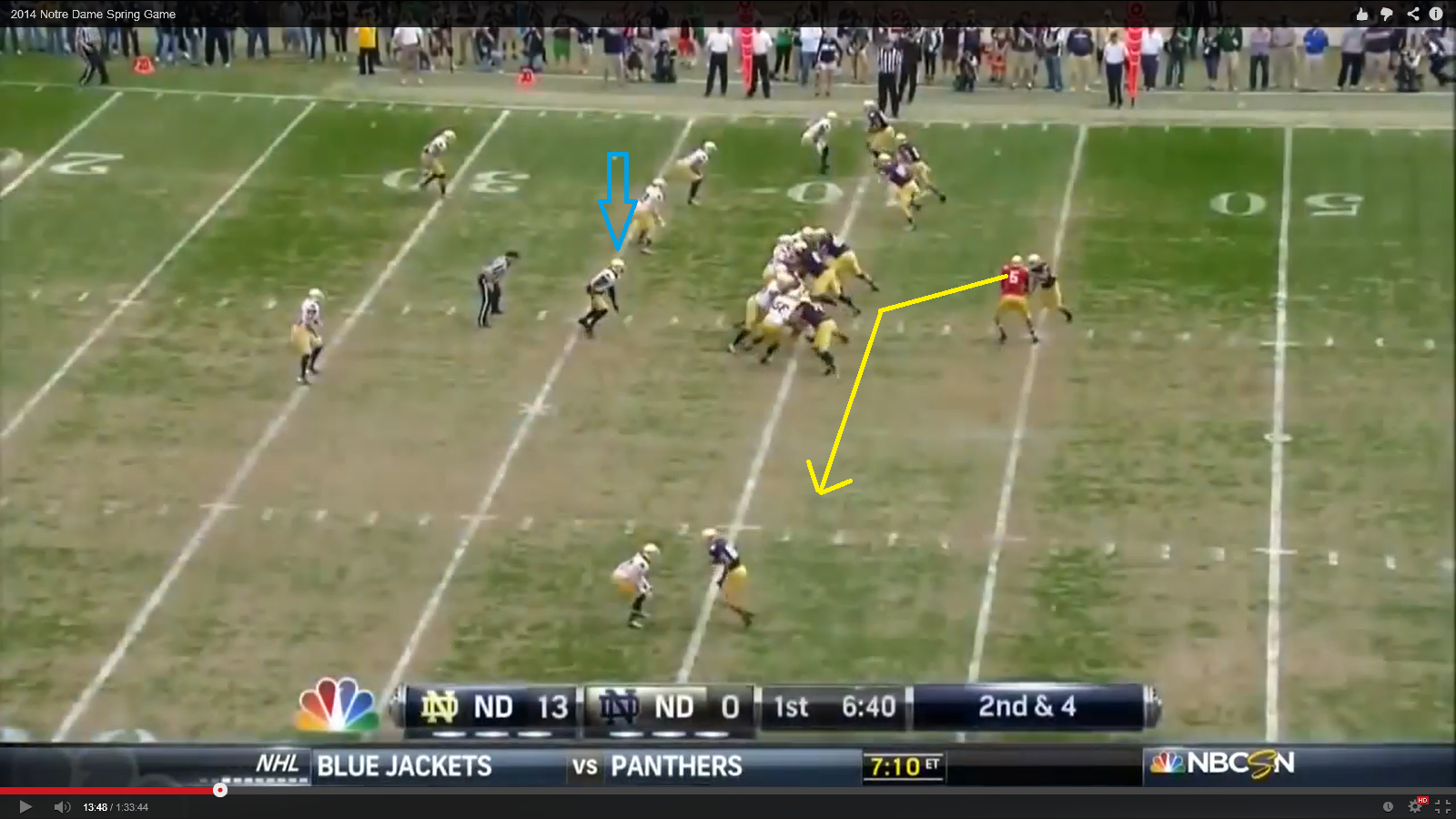 A fraction of a second after the snap. Tarean Folston is going to run to the inside and then bounce the play to the outside (yellow arrow). Jaylon Smith (blue arrow) will have to step up to honour the inside run threat and then pursue to the outside. 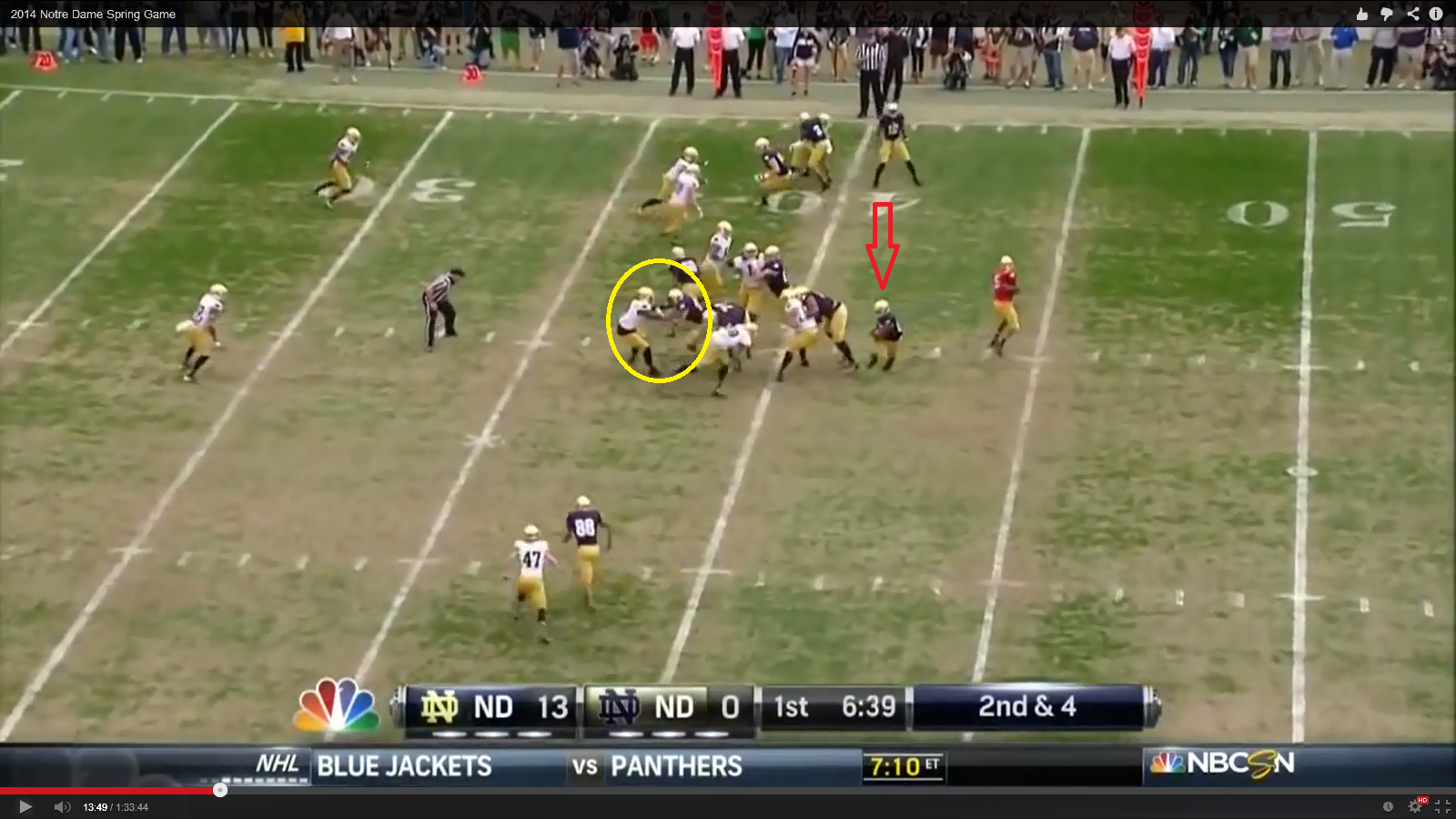 Folston (red arrow) is making his break to the outside. Smith is just about to engage with the offensive linemen. For most linebackers the play is over. They won't have the ability to get off the block or the speed to chase down the running back to the perimeter.

As a side note, Folston is a little impatient on this run. If he waits a bit longer, Smith will be engaged with the offensive lineman and will have no chance to make a play on the perimeter. 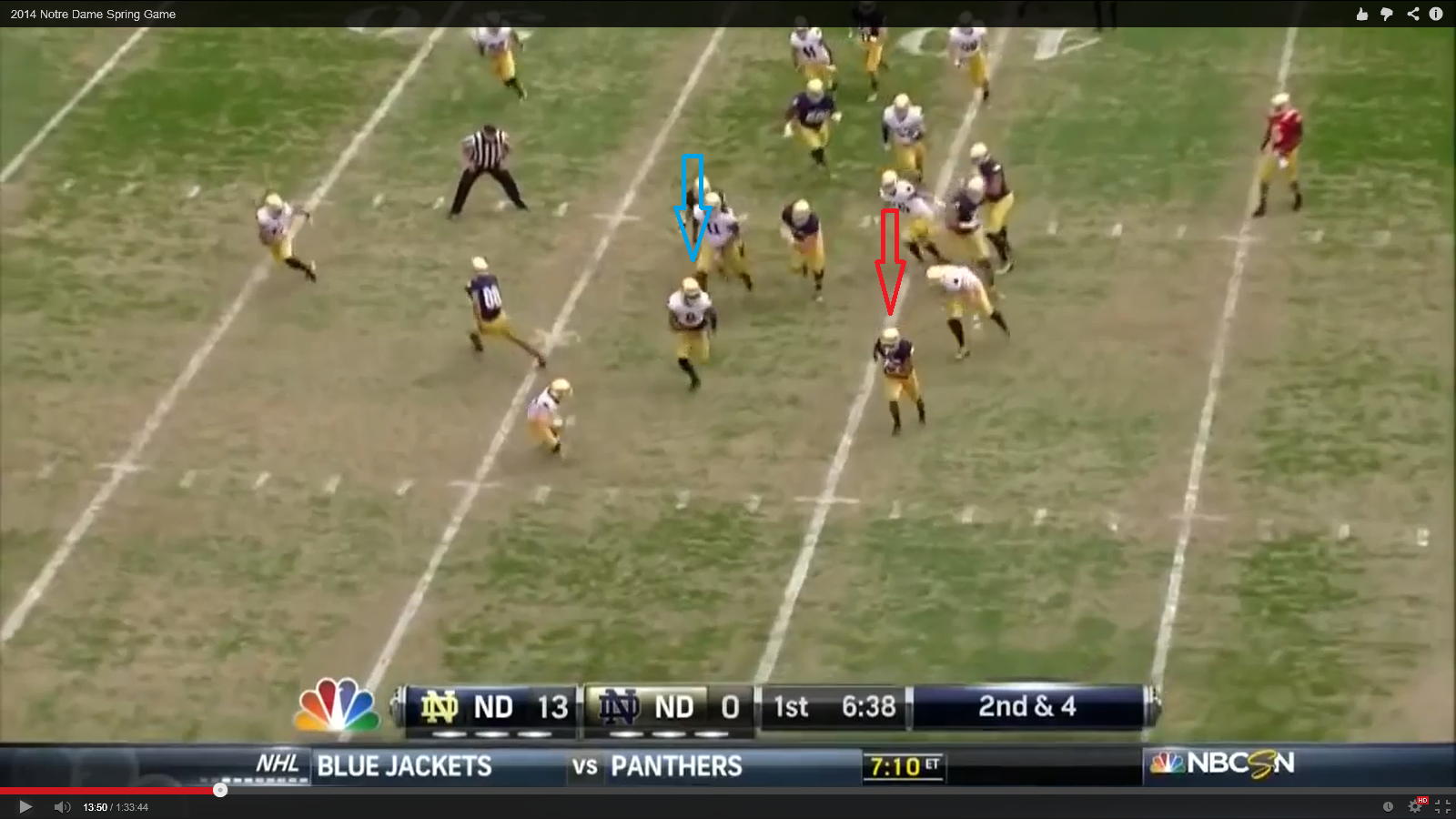 Folston (red arrow) should be off to the races. Jaylon Smith (blue arrow) is in a trail position. The vast majority of inside linebackers would be finished at this point. 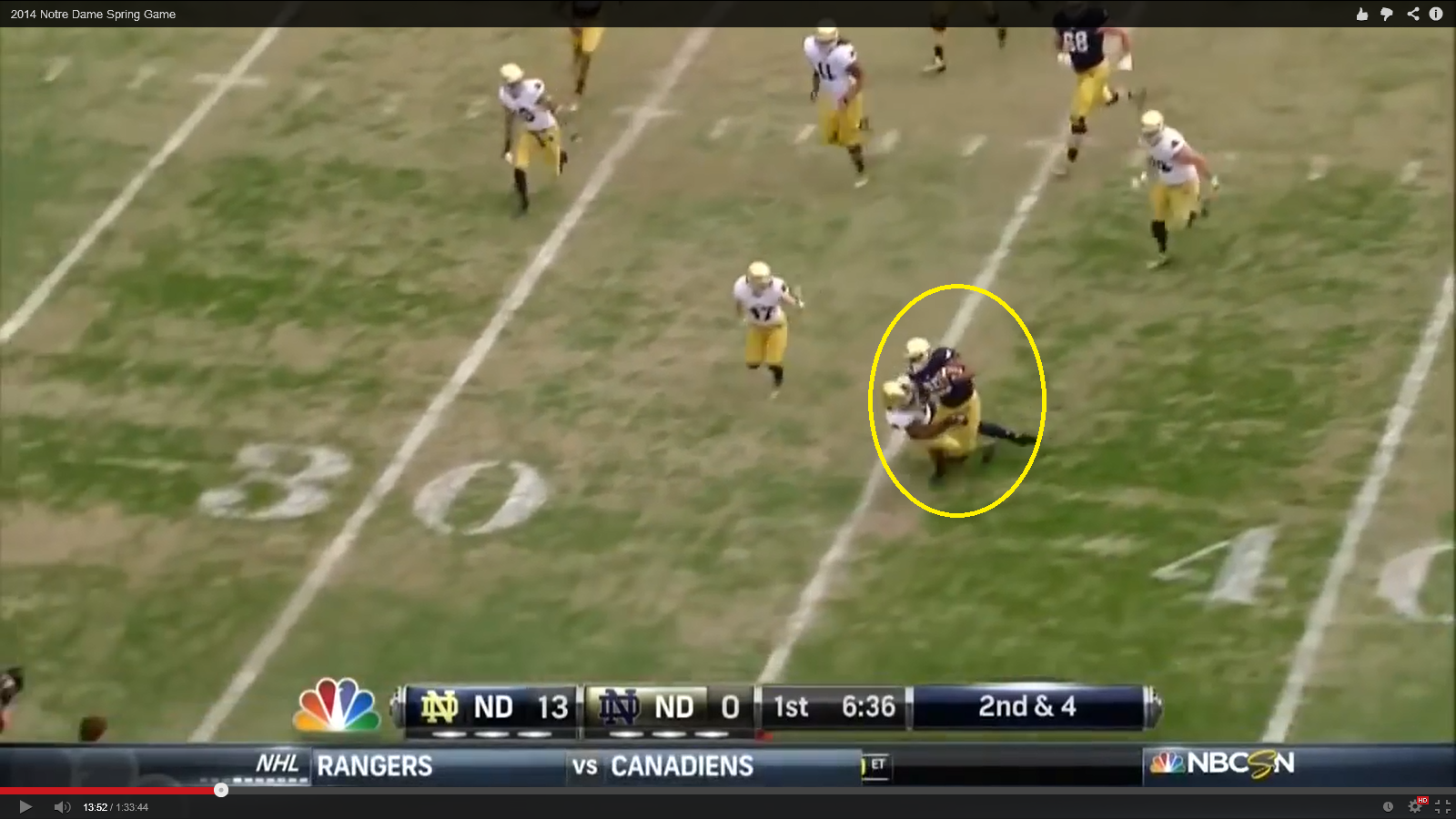 Jaylon Smith is not most linebackers. This is why the coaching staff moved him to the inside. He can make plays from sideline to sideline.

Jaylon Smith is still a work in progress as an inside linebacker. His stance isn't great, he hasn't mastered all of the reads and doesn't attack the inside run the way he needs to. The good news? All of these short comings can be improved with coaching and repetition. What can't be coached is his freakish athleticism and elite speed.