An Idiot's Guide to FieldTurf

We are here to give you knowledge on this controversial surface.

Share All sharing options for: An Idiot's Guide to FieldTurf

In case you've been living under a rock for the past couple weeks you've probably heard that Notre Dame is switching to an artificial playing surface for football. If you haven't heard yet, please breathe. And another deep breath. Okay, now we can continue.

Question: So what is FieldTurf, anyway?

Answer: It's actually a division of a French flooring company called Tarkett Inc. and was originally developed by a Montreal-based company called SynTenni Co. You'll notice I'm not spelling it as field turf. FieldTurf is a company that specializes in the popular artificial playing surfaces, while field turf is commonly used as a blanket statement for all modern artificial surfaces.

It's a lot like Kleenex, Q-Tips, or Coke where a specific named product has come to describe the actual product from other companies as well.

Question: Is FieldTurf different than other brands of artificial turf?

Answer: In the big picture, no not really.

Question: Will Notre Dame be putting in a FieldTurf brand field for the Stadium?

Answer: Yes. The official press release from the University reads as follows:

Artificial turf is coming to Notre Dame Stadium, home field for the University of Notre Dame football program, in time for the 2014 season.

Installation of a FieldTurf surface will begin following the University's May 16-18 Commencement Weekend. A completion date of Aug. 15, 2014, is anticipated.

Question: How is FieldTurf different than natural grass?

Answer: Here is a nice picture to help explain. 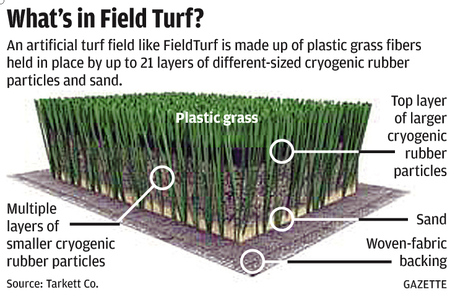 Question: How many teams use FieldTurf?

Answer: Here is a list of all the D-1 programs and the surfaces they play on: 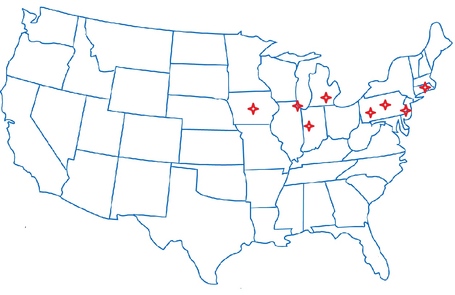 Answer: To put it bluntly, not really.

Opponents of FieldTurf have been feverishly trying to research this topic for quite some time. They came out in full force since the announcement by Notre Dame.

The research is mixed at best. For every study that shows natural grass is a little safer, another says FieldTurf is a little safer. Common sense should prevail here. Notre Dame has turf in its indoor facility and has been practicing on FieldTurf outside for the past 7 years. No surface will ever be perfect but incidents of leg and lower limb injuries have not been suspiciously high for Irish players in practice.

If the surface was increasing injuries I doubt the Notre Dame players would be so excited to switch to it inside the Stadium.

Question: Will Notre Dame paint the field when the new turf is put in this summer?

Answer: The scuttlebutt seems to be that a ND monogram will be going at mid-field, similar to what is currently on the Labar Practice Facility outdoors on campus. What, if anything, happens to end zones is probably going to be up for a rather lengthy debate. We gave a historical recap of Notre Dame's end zones on Twitter recently:

The OG. The original design. pic.twitter.com/WFxFffKDv9

The 1990 design. Two monograms in one end zone would be too much! pic.twitter.com/50KreWrhL4

The 1991 design used for the 1991-92 academic year and 150th anniversary of the University. pic.twitter.com/fMkBPY8mYi

Personally, I'd go with a blue monogram at mid-field with white outline similar to the new design in the Loftus Center (although that has a gold outline too) and keep the slash marks in the end zone for now. I don't think the gold monogram is vibrant enough or contrasts all that well with a green field.

Question: Where did the natural grass fall on the Notre Dame Tradition Scale?

People enjoy watching mud and dirt on the uniforms just like in the past people enjoyed watching blood on the faces of the players. But the game evolved and facemasks were introduced for player safety. Now, the game is evolving again. Natural grass isn't unique to Notre Dame, we didn't invent it, and it changes almost nothing about the University and football program from a tradition stand point.

Question: Why did Notre Dame ultimately make the switch to FieldTurf?

Answer: They did so for a handful of reasons.

First, it had become increasingly difficult to maintain a natural playing surface. Whether it was Notre Dame's location just east of Lake Michigan, lack of sunlight from past renovations, or drainage systems that weren't working properly, the fact remains that Notre Dame's playing surface has been poor for many years and the invention of HD television and other stable artificial surfaces only makes it look worse.

Second, it allows the team to practice more regularly inside the Stadium. Heck, just the ability to practice some special teams in that game setting should be met with enormous applause.

Third, the program now has the same consistent surface on all three football facilities.

Four, the change allows the school the ability to use the field (Commencement, outdoor hockey games, smaller concerts, etc.) without worry of tearing up the field or stunting the growth process in the off-season.

Perhaps each of these situations alone didn't warrant a change but put together it was a fairly easy decision.