In this week's Five Wide Fullbacks, One Foot Down brings you comprehensive coverage of the five biggest post-Blue Gold Game developments in Irish football.

Multiple sources have reported that Notre Dame running backs showed off a bizarre new running style implementing "cuts" at last weekend's Blue and Gold Game scrimmage.  The style involves a normal forward running style coupled with a series of "cuts" in which the running back decisively plants one foot into the ground and rapidly changes direction to "elude" and "evade" defenders.  One Foot Down writer Larz commented on obfuscation being one reason for the new style's effectiveness: "cutting is effective in large part because the defender initially thinks that the back is going one way, but the back in reality goes . . . another way . . . eh." 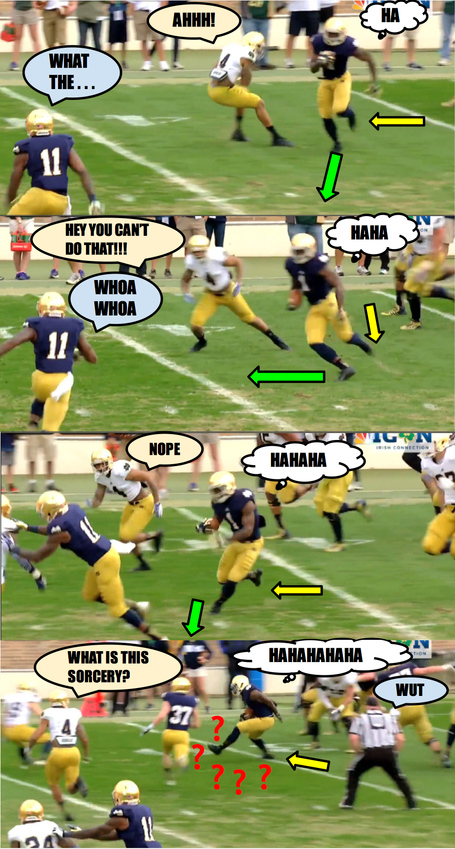 But not all Notre Dame fans are equally enthused.  "I mean, they didn't even use the tippy-toe technique," commented former Irish tailback George Atkinson.  "When they ran out along the row of guys [the offensive line] towards the white lines [sideline], they didn't even slowly stop all their momentum and then think about running towards the yellow pole [endzone].  They just, like, ran one way and then all of a sudden they were running the other.  Bryant did it like three times on one run.  That's more times than I've done that, like, ever.  That can't be legal, can it?"  Atkinson also criticized the Irish backs' failure to run full speed down the sideline, then try to slow down, stop, let the defender catch up to them, then slap them on the back and run the other way.

For their part, Notre Dame traditionalists have criticized the new running style as "wimpy," "un-Holtz-like," "failing to impose your will even if the other guy knows exactly what you're going to do," and "anti-Holtzian."

At least one Notre Dame player who had an outstanding Blue and Gold Game is destined for a life of complete and utter gridiron obscurity, say Notre Dame football pundits.  The player has typically been the game MVP, but could be any other player who had a completely "dominant," "lights out," or "beast mode" performance.  The player most likely consistently embarrassed would-be tacklers or blockers, who were themselves either good players who took plays off, or scrappy, lunch-pail, blue-collar type walkons lacking in any athletic ability whatsoever.

Former Blue and Gold Game MVP Junior Jabbie tabbed rising Junior Romeo Okwara a likely candidate.  "Three pretty questionable sacks in a scrimmage when the QB wasn't live makes him strong candidate, but he's looking like a lock to start or play a lot of minutes next season, and that basically eliminates him.  Maybe Malik Zaire?  If Kizer and Barnett come strong, Malik could maybe transfer.  I don't know.  He showed a little too much chest for me to put the Kiel tag on him.  We'll see."

One thing is certain, though, this player's impending relegation to football obscurity will do nothing to tamp down fan expectations.  Indeed, One Foot Down writer First Down Moses quoted spring game attendees More Noise and Occtipus discussing slot receiver C.J. Prosise as "basically Randy Moss with better short speed," corner Cole Luke as "a slightly more explosive Richard Sherman," and running back Greg Bryant as a "lock to go in the negative 10th round of the 2004 draft." 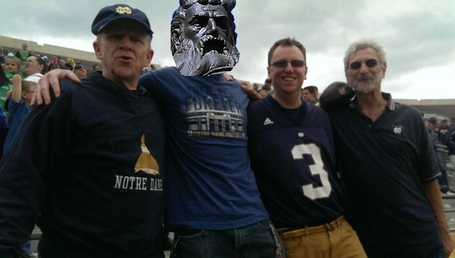 Team Not Buying In, Astrophysicists, Historians, Theologians Agree that End is Near

So first time reports of Notre Dame players being "checked out," and not "dialed in" have Notre Dame astrophysicists, historians, and theologians concerned about cosmic implications.  Notre Dame physics Professor Justin Crepp worries that there just is no way to explain this turn of events "Newtonian physics and relativity give us literally no help in figuring out what exactly is going on."  Dr. Charles Rice, ND Law Professor Emeritus, noted that "there simply is no precedent for this."  Meanwhile an official statement from Notre Dame's theology department ascribed an "escatological significance" to this development.  It also warned the ND faithful to repent, especially if other signs manifest themselves, like lacking height/weight/40-time/strength/charisma/constitution/magic/THACO gains or reports of ineffective new defensive schemes.

Notre Dame bloggers are reporting that Notre Dame fans are almost unanimously reacting with grace, reason, and maturity to the University's announcement that the playing surface at Notre Dame Stadium will be replaced with an artificial surface before the 2014 season.  One Foot Down interviewed a number of Notre Dame bloggers to take the pulse of Notre Dame fandom.  "Everyone is pretty much happy," reported the anonymous head writer of a large Notre Dame athletics forum.  "Really no complaints at all.  Early on there was some very muted, empirically based, and totally rational discourse on meta-analyses of injury studies.  I personally find the data equivocal.  But more to the point, reasonable minds can certainly differ and all our commenters have been mindful of that."

Mark Phunck of Notre Dame site Irish Insights reported that even the Notre Dame "old guard" seems to be embracing the change.  "They really came along quickly.  Initially there were some wistful feelings for grass, but those have come and gone with just a few tears.  One of our guys even told me ‘there's no tradition of making our guys play on a crappy field.'  I tend to agree.  Most of our readers feel that the only ‘capital-T' traditions worth preserving at Notre Dame are golden helmets and winning the right way."

Even those who developed a "run the darn ball" mindset while coming of age under Lou Holtz in the late 80's are reportedly "pretty much over" and "on board with" Notre Dame's move to field turf.

In an elaborate April Fool's joke, Notre Dame Head Coach Brian Kelly announced Monday that he had fired the entire team, citing "personality conflicts and disagreements about the program's direction." For their part, Notre Dame football players took their case to the court of public opinion via twitter.  "Notre Dame football used to be cool.  #lame" tweeted sophomore Sheldon Day.  Current players Montgomery VanGorder, Durham Smythe, and Devin Butler were more focused in their criticisms, arguing that Coach Kelly "sucks," that playing football at Notre Dame is "the worst," and that South Bend is a "miserable blizzard town" and "an arctic wasteland."

The joke, however, was on Notre Dame football fans, as Kelly announced in a press conference late Thursday.  "We just knew it would be totally hilarious to the max, and guess what--SUCCESS."  Press conference attendees noted that Kelly was clearly the only one laughing.  Many of the players claim to have had reservations beforehand: "you have to know your audience," commented quarterback Malik Zaire.  Others tried harder to distance themselves from Kelly's ham-handed attempt at humor "uh, yeah, like, I told him no one would find it funny, but did he listen?" asked walk-on Connor Cavalaris.  "To each his own," said former Notre Dame tight end and self-proclaimed ND Football King of Comedy Troy Niklas, "but in my opinion the whole Andy Kaufman thing, I don't know, it's just it wasn't really funny even when he did it."

Kelly's joke follows a long tradition of April's Fools jokes just not being funny--jokes in the tradition of radio station giveaways of free guitars that turned out to be air guitars, mixing Skittles and M&Ms in the same bowl (which should be a capital offense in my opinion), and slashing your boss's tires then burning his house to the ground.

Notre Dame Stadium Grounds Crew to Seek Employment Terraforming Mars, or Any Industry In Which You Get Paid to Try to Grow Stuff In Impossible Environs

Irish Football Players Collectively Bargain for Literally All of the Chipotle, and not "Literally" in the Modern Sense in Which It Is Used to Mean "Figuratively," or For Mere Exaggeration, But Actually Literally

Happy Good Friday to all.  What are our readers up to today and this weekend?