The offense raced out to a big lead but the defense clamped down in the second half. We investigate further.

The spring game came and went and now we're forced to hunker down for the summer without football. But first, a more thorough review of the 2014 Blue-Gold Game.

Malik Zaire certainly played beyond my expectations. Even taking the spring game with a grain of salt I'm a lot more comfortable with him coming into the game this fall if the need arises. I'm still not on board with playing him as a change of pace player (not needed) and he hasn't immediately closed the gap between himself and Golson, but I think he took a couple big steps to showing he can be a legitimate starting option.

Even if there won't be a quarterback controversy--I fully expect Golson to remain in the driver's seat through summer and into fall camp--I'm very impressed with Zaire's development. He was officially sacked 5 times, looked a little panicky at times, and should have thrown an interception if Matthias Farley could catch, so it wasn't all roses for Zaire. Still, when he was given time he looked decisive and really threw the ball well. Again, spring game restrictions and everything, and perhaps they threw less at Zaire in terms of different defensive looks as Golson, but 292 passing yards on 18 completions and 23 attempts is real nice.

Personnel: As best as I could tell Zaire's first series had him protected by Bivin (LT), Hanratty (LG), Hegarty (C), McGovern (RG), and McGlinchey (RT). They were facing a defensive line of Ishaq, Day, Matuska, and Okwara. The linebackers were Moore, Larkin, and Turner with Russell and Atkinson at corner and Collinsworth and Baratti at safety. Golson's first series had him protected by Stanley (LT), Elmer (LG), Harrell (C), Montelus (RG), and McGlinchey (RT). The defenders stayed in nickel with Ishaq, Jones, Utupo, and Trumbetti up front, Smith and Schmidt at linebacker, and Luke, Calvaris, Farley, Redfield, and Shumate in the secondary. Obviously, there was plenty of subbing. For example, Hanratty came in for McGlinchey at right tackle during Golson's first series and Rabasa came in for Williams. The competition looked to stay pretty even, although blitzing against Golson seemed much more prevalent.

Golson looked almost exactly like the player we saw in last year's spring game and that is mildly concerning. He didn't look particularly comfortable in the pocket, his progressions seemed labored, and he was inaccurate on a handful of throws that you'd really like to see him put on the money.

I'm not too concerned about it because he was pressured a lot and I think he was being overly conservative with the ball. It's comforting that Golson continues to exhibit a propensity to protect the ball and be safe with his throws. I won't get too hung up on a spring game performance but I was disappointed with his game.

Quite the impressive day by the running backs, especially as pass-catchers. I thought the defense did a good job early of bottling up inside runs and they kept Cam McDaniel (9 carries, 33 yards, 3.7 per rush) in check for most of the afternoon. McDaniel is a known quantity and leader and was his usual solid but unspectacular self.

Folston looked good with a productive 38 yards on 7 carries. I would have liked to have seen a little more reps out of him but alas. However, he was a huge weapon in the passing game hauling in 5 receptions for 54 yards. In total, the backs caught 8 passes for 85 yards which is a breath of fresh air compared to last year.

Greg Bryant got off to a slow start not seeing many reps early and ceding some spotlight to the other backs but he finished strong. He collected a pair of 9-yard runs, broke off a beautiful 51-yard run that showed off his great cutting ability, and threw in another 11-yard run. In all, Bryant led the game with 12 carries and 95 yards. His talent is immense.

Carlisle had a quieter day than I thought he would (I picked him for MVP, remember?) but his lone catch was a tough 6-yarder in traffic on a bullet from Zaire. He also was over-thrown by Golson on a sure touchdown and Golson was late on another throw that could have netted big yardage.

Robinson and Fuller continue to develop at a nice rate. Neither is bonkers good right now but that's okay. I'd like to see more from Robinson on short passes though. His down-field playmaking ability is great but I think Fuller is in line for more targets because of his speed and quickness in small areas.

C.J. Prosise continues to impress when given the opportunity. Sure the tackling by Collinsworth and Hardy on his touchdown play left a lot to be desired but Prosise can scoot for someone weighing 220 pounds. It certainly appears like he's the front runner heading into the summer to start in the slot position.

Steady play from all three scholarship tight ends. They all caught a couple balls seemingly every single one for about 12 yards. I'm curious to see if anyone can become a threat deeper than a first down from the line of scrimmage but at least we should have some solid and consistent big bodies to hit on a bunch of hitch routes and check down passes.

The line was working without 2 projected starters and was not helped at all by Golson and Zaire's happy feet in the pocket. Granted, 8 sacks allowed for -62 yards is bad either way but I thought the quarterbacks, particularly Golson, could have done a better job stepping up in the pocket or making a quick throw in the face of pressure.

The run blocking was solid. The three running backs netted 166 yards on 28 carries for 5.92 per rush. At times the line seemed overwhelmed by some blitzes, though. For playing such a vanilla defense that was certainly a lot more pressure dialed up than we've seen in previous spring games. The line looked kind of poor in pass blocking last year during the spring game too but shut opponents down in the fall. We'll see how they come together again this summer. It wasn't all for naught though. On Golson's long completion to Robinson the defense sent 8(!!) players on a blitz. It was picked up nicely, Golson saw the 1-on-1 coverage, and made the quick decision.

I can't say I was particularly blown away or disappointed by anyone along the defensive line. I saw a lot of stunting and a bulk of the pressure coming up the middle. I thought this had a lot to do with the lack of experience on the interior for the offensive line and the quarterbacks holding on to the ball too long.

For example, Okwara had 3 sacks, and Trumbetti, Rochell, Matuska, and Hounshell all totaled a sack as well but I didn't see these players blowing by blockers.

I mostly watched where Jaylon Smith lined up and what they had him doing before and after the snap. For a lot of snaps he was lined up at the weak-side (Will) position with Joe Schmidt next to him at the middle linebacker spot. That was with a nickel corner on the field as well.

Outside of watching Smith I didn't see a whole lot from the linebackers. One exception would be John Turner who looked very active near the line of scrimmage on a number of blitzes. He finished with 7 tackles and 0.5 tackles for loss. I'd consider his spring about 74 times better than anything we could have imagined.

Almost nothing was learned from the corners. Russell played very little and didn't even register a tackle. Cole Luke made a nice breakup near the end zone but that was his only mention on the stat sheet.

I'm confounded by the lack of presence by Jalen Brown. He's completely fallen off the map over the past 18 months and had walk-on Connor Calvaris ahead of him on the depth chart for this game.

I saw some good and bad out of this group. Shumate finally looked aggressive (nice pass break up on Carlisle) and might have gained his confidence back. Redfield wasn't involved a whole lot but would have had a sack on a nice blitz off the edge.

I don't have much confidence in Austin Collinsworth. I just don't. 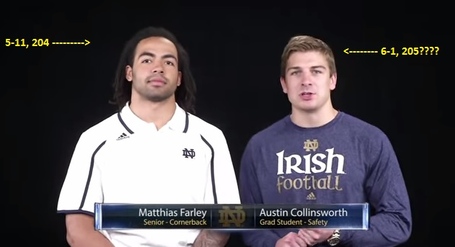 He got smoked by Prosise for a touchdown while trying to come down and fill a lane and I'm enormously concerned about his size & speed combination. There's nothing we can do but place some trust in Brian VanGorder now that he's making the right decisions.