Come join our community and discuss the spring game with us.

Welcome to our Blue-Gold Game open thread. As always, let's keep the language clean in the comment section. 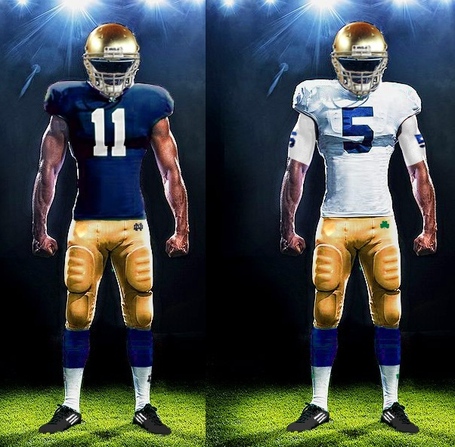 NBCSN's coverage will be enhanced by production elements that will give fans an all-access look into Saturday's game. Quarterbacks for both teams and head coach Brian Kelly will be mic'd up, and Kelly will be on headset to communicate with Burmeister and Mayock live during the fourth quarter, while simultaneously calling plays from the sidelines. Flanagan will conduct interviews with players throughout the game as they come off of the field, and with former Notre Dame standouts over the course of the telecast.

NBC's 24th season of broadcasting Notre Dame Football home games begins on Saturday, August 30 at 3:30 p.m. ET when the Fighting Irish host the Rice Owls in their season opener, followed by a primetime matchup against the rival Michigan Wolverines on Saturday, Sept. 6 at 7:30 p.m. ET.

NBC Sports Group's coverage of the 2014 Notre Dame football season continues Saturday, Sept. 13 at 7:30 p.m. ET on NBC, when the Fighting Irish host the Purdue Boilermakers at Lucas Oil Stadium in Indianapolis, Ind., in the 2014 iteration of the Shamrock Series.

NBC Sports Live Extra - NBC Sports Group's live streaming product for desktops, mobile devices, and tablets - will stream coverage of this weekend's Blue-Gold Game via "TV Everywhere," the media industry's effort to make quality content available to authenticated customers both in and out of the home and on multiple platforms. In addition, NBC Sports Live Extra will stream all Notre Dame football home games for upcoming the 2014 season.

This weekend's Blue-Gold Game on NBCSN will live stream to PCs, mobile devices and tablets through NBC Sports Live Extra, and to the digital platforms of participating cable, satellite, and telco services, via "TV Everywhere," which is available on an authenticated basis to subscribers of participating MVPDs. 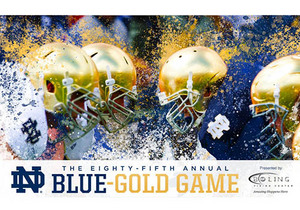