The ND Men's Lacrosse team, fresh off a dominating victory, fell in a surprising fashion to Syracuse. Let's look at what went wrong for the Irish.

Matt Kavanagh was all over the scoreboard a week ago against the Ohio State Buckeyes.

Less than five days later, the Syracuse Orange kept him off of it.

The Irish star attackman could only muster 2 assists as the Irish played catch-up for most of the game, eventually falling 11-10 to Syracuse in the Carrier Dome.

Syracuse isolated Kavanagh with their top longpole, Brandon Mullins, and he did a superb job of forcing the Irish to find different contributors and keep them in the game.

ND never led in the game either, which was surprising given the dominating performance a week ago. They traded scores with the Orange throughout the contest.

After a Kevin Rice goal put the Irish down 10-7 early in the 4th Quarter, Irish Coach Kevin Corrigan circled the wagons and got three quick scores from his midfield, as his son Will started the rally, followed by goals from Pat Cotter and Marlatt.

But the Achilles Heel for ND (we'll discuss below) reared it's ugly head and the Orange won the faceoff and Rice netted the game winner for Syracuse with 2 minutes remaining in the contest.

The loss drops the Irish to 4-3 and tied for second in the ACC with Duke, whom the Irish host this weekend in a very important game.

Analysis: Why did Syracuse win?

On paper, the Irish looked pretty good across the board. In the absence of Kavanagh, Notre Dame got a great effort from Attackman Conor Doyle, who netted 4 goals and from Middie Jim Marlatt, who was added a goal and an assist. Even goalie Shane Doss played pretty well, netting 11 saves and giving up 11 goals. Some of his saves were quite impressive, too.

The game looks a lot similar to the Irish loss against the Denver Pioneers earlier in the season. The Irish dominated the shot count. They had more ground balls, a better clear percentage, fewer turnovers and fewer penalties.

But the didn't win where it counts: the scoreboard.

What is typically the Irish strength: faceoffs.

Irish Faceoff Specialist Liam O'Connor was stymied by Orange FOGO Chris Daddio all game, only winning 7 faceoffs in 21 attempts, a paltry 30%. Contrast that with Daddio, who was 43% coming in to the game and won 15 of 24 faceoffs (62.5%).

Here is an image that I used in O'Connor's previous Films Post. He is low and tight on the ball. The UVA FOGO is leaning in to the ball and is on his toes, losing his center of gravity. 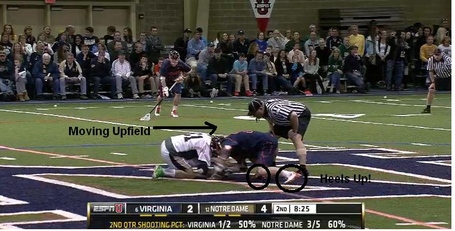 Here is a look at a faceoff he lost to Daddio: 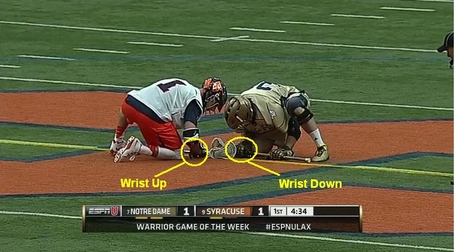 It is like looking into a mirror. Daddio is in the exact same position as O'Connor. His knee is down and he is low on the ball. Unlike O'Connor, his wrist is up though, which would be a detriment. However, O'Connor was whistled for a violation on the opening faceoff, and his cadence is off.

It gets worse for O'Connor: 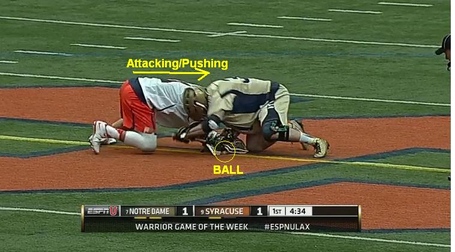 Daddio does what any FOGO does when he goes against a better FOGO: he jams. This is an image of a textbook jam. With the ball STILL in the center, Daddio attacks O'Connor's stick, denying him the clamp and moves upfield, giving him more power to try and pick the ball up himself. 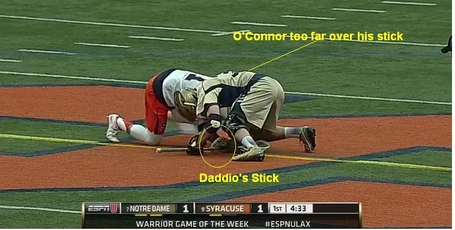 Daddio's jam move worked better than he could've imagined. He pushed O'Connor's stick so much that Liam is now too far over his stick. This prevents him from getting the clamp and he has to stand up. Notice how Daddio's knee is still on the ground while Liam is beginning to stand up. 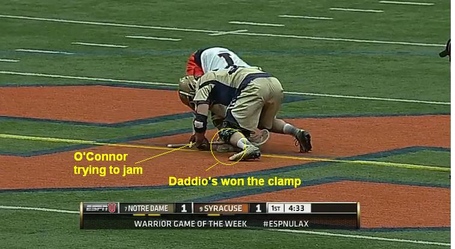 Daddio wins the clamp. The head of O'Connor's stick is now almost between his legs and he has no other options outside of bailing on the faceoff and playing defense or jamming Daddio to try and tie him up. He opts for the latter, but can only jam with the butt of his stick. You can guess what happens next. 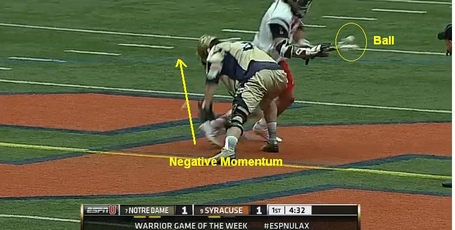 O'Connor is used to being in Daddio's position, locking up the faceoff. Instead, Daddio has the ball and the win. Also look at the time lapse. Typically, O'Connor wins a faceoff in less than a second. Here, more than two seconds have elapsed. That is the product of jamming a faceoff. Daddio benefitted from his LSM on the wing as well. Peter Macartney had 6GBs, all due to Daddio slowing O'Connor down.

As a former wing LSM myself, I was always communicating with my FOGO about where I would attack from the wing. If my FOGO swept to himself, I was attacking the offensive end. If he was getting beat, I would run a "banana" on the defensive end. And when my FOGO jammed, I attacked the faceoff X. Daddio jamming O'Connor enabled Macartney to swoop in to snag the important ground balls for the Orange possession.

O'Connor will have to take this week to get right from the faceoff X, because Duke and their FOGO in Brendan Fowler (63%) will be a much tougher foe.