OFD Films: Is Justin Brent the answer at slot receiver for Notre Dame?

Justin Brent might just have the right combination of skills to unleash the full potential of the slot position in the Notre Dame offense.

Share All sharing options for: OFD Films: Is Justin Brent the answer at slot receiver for Notre Dame?

Bigfoot. The mythical creature that some believe roams the forests of the Pacific Northwest. It's existence documented through grainy film footage of dubious origin and questionable eye witness accounts. Brian Kelly seems to be in the process of creating his own version of the Bigfoot mythology in South Bend. The slot receiver.

Somewhere in the archives of the Gug there is grainy footage of a young Theo Riddick showing promise in this elusive position. Eye witnesses say they saw a fast Hawaiian not only playing slot, but at times thriving in the position. The old timers whisper the name Davonte Neal in hushed tones when they talk about the promise the slot position once held. Are these the ramblings of a small group of football zealots completely out of touch with reality or a vision of what is yet to come?

The success of smaller players in the slot, does not mean that only small players can be effective there. It's a position that is highly versatile and can be adapted to a fit the skill set of a wide range of athletes. This is good news for the Irish, since they don't appear to have an influx of smaller, shifty, skill players on the current roster.

At 6'1.5" 204 lbs Justin Brent certainly doesn't fit into the small and shifty category. However, he does have a skill set that could be very useful in the slot. Let's take a look at the film and I'll show you what I mean.

Justin Brent has the potential to develop into a great receiver at Notre Dame. He is big, fast and catches the ball well. What really stands out when you watch his film is his ability to high point the ball. He is the type of receiver where the quarterback can throw a jump ball and rest assured Brent will go get it. Here's a few examples 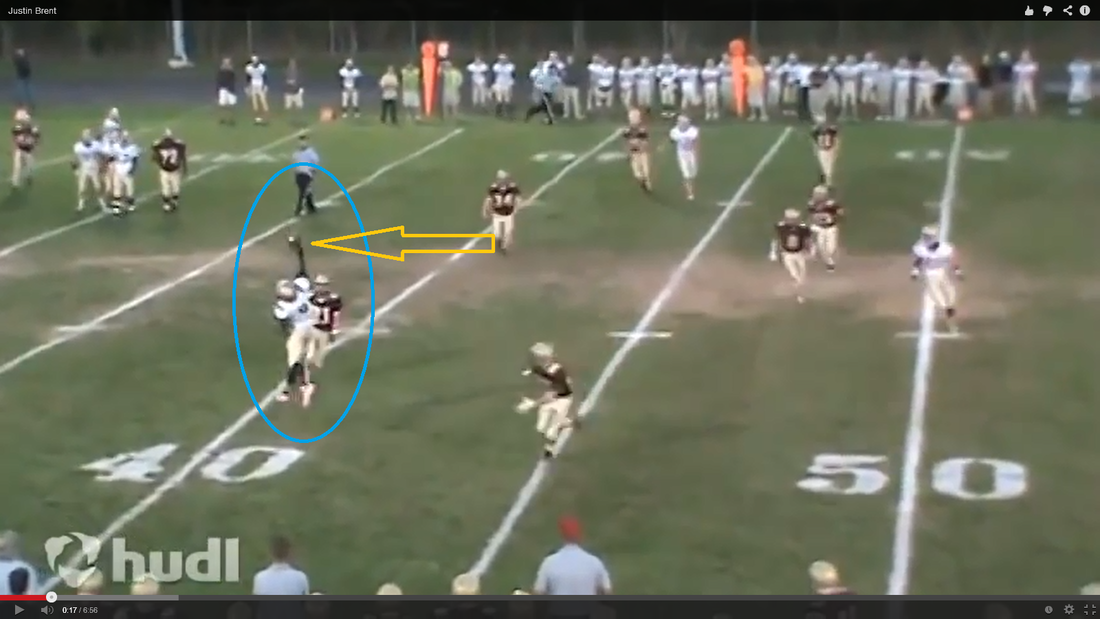 Uh, yeah, I'd say this qualifies as getting the ball at its highest point. 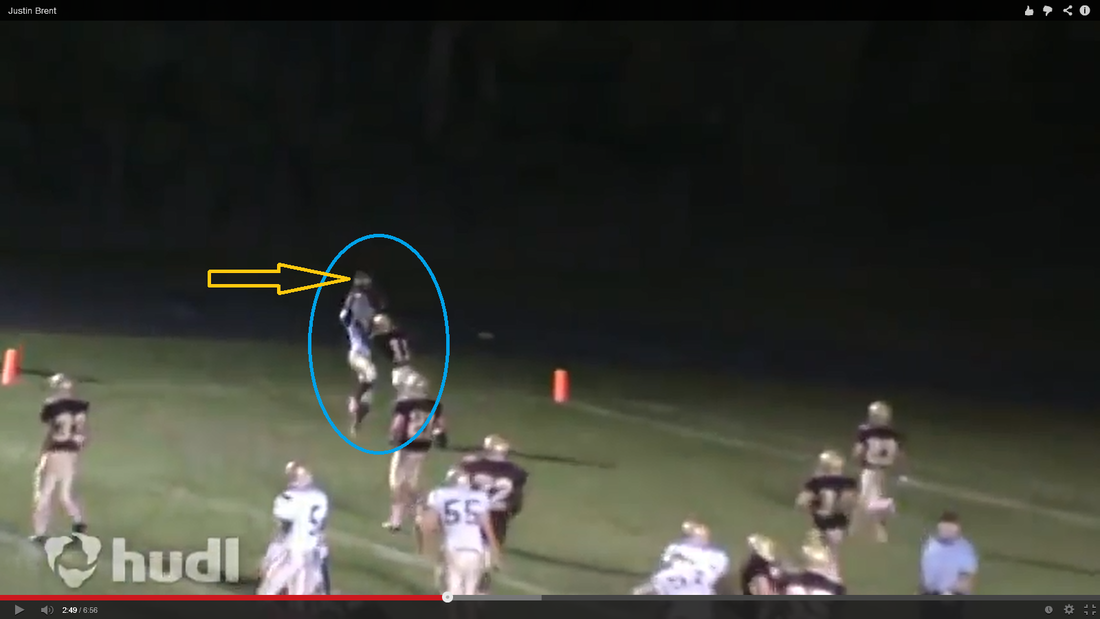 Throw the fade to Justin Brent and he is going to come up with the ball just about every time. 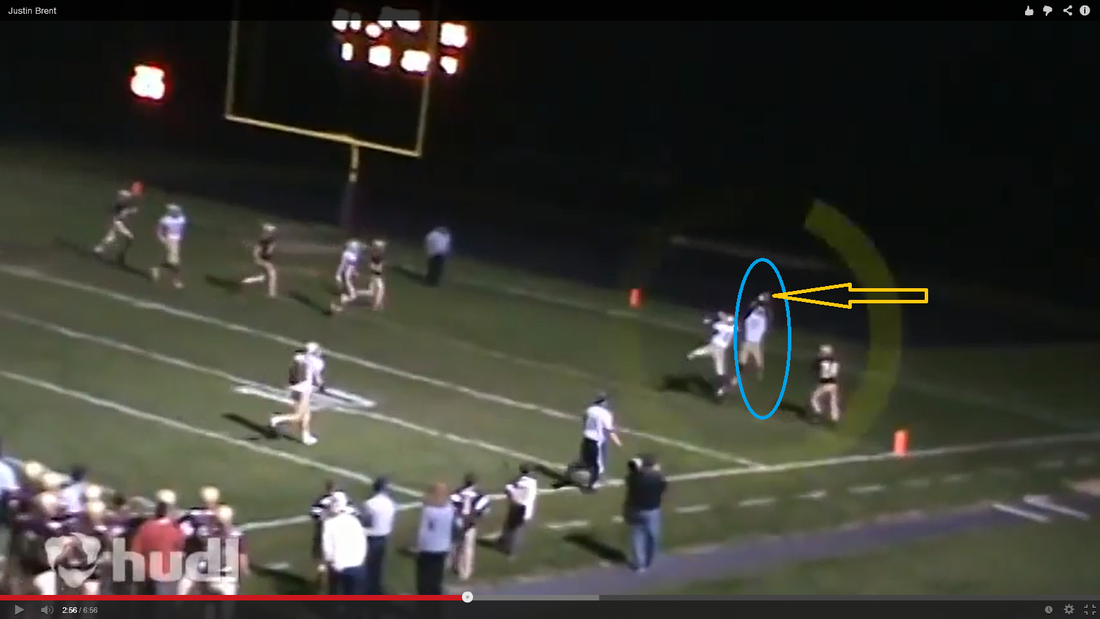 Brent is actually playing defense on this play. Even as a safety he knows how to go up and get the ball.

As with any high school receiver, Brent's ability to master the nuances of playing the position (route running, reading coverage etc.) is still unknown. One thing that is obvious from his film.... he has elite ball skills.

When you watch Justin Brent's highlight film, you'll notice that he is playing running back. A lot. So how does being a high school running back translate into being a slot receiver at Notre Dame? Here's a few examples of transferable skills: 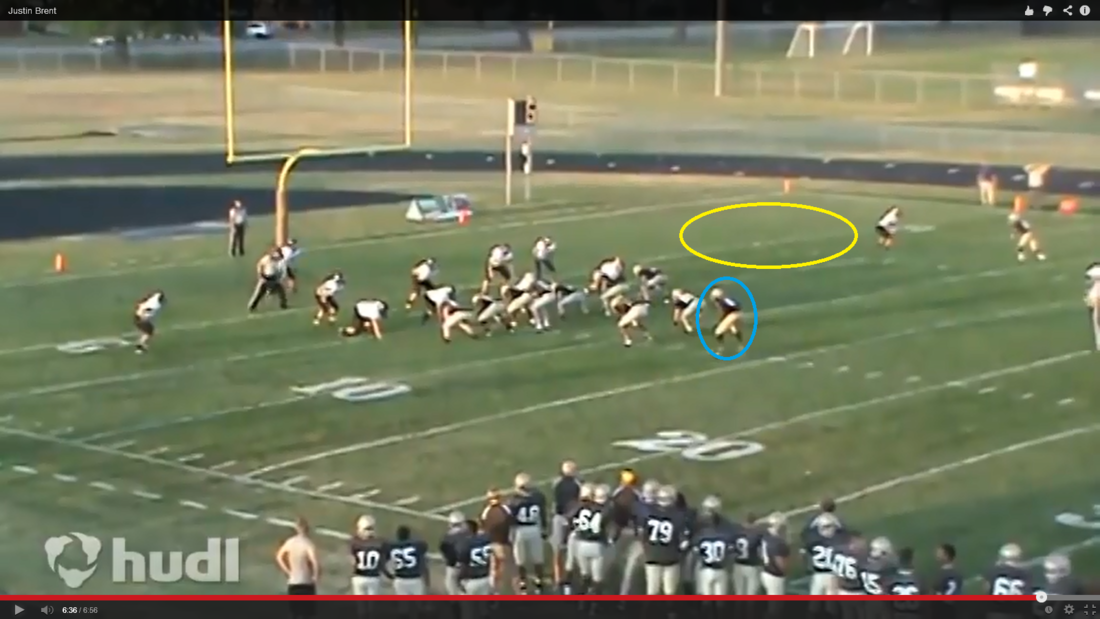 One of the things I look for when evaluating ball carriers as they transition to the next level is will they turn up field? Typically most of the skill players Notre Dame recruits are the fastest athletes on the field in high school. As a result they have a tendency to try and out run everyone to the perimeter (yellow circle) when they get the ball. At the high school level this works. Great athletes can run "east and west" and be very productive. At the D1 level, not so much, everyone is fast. 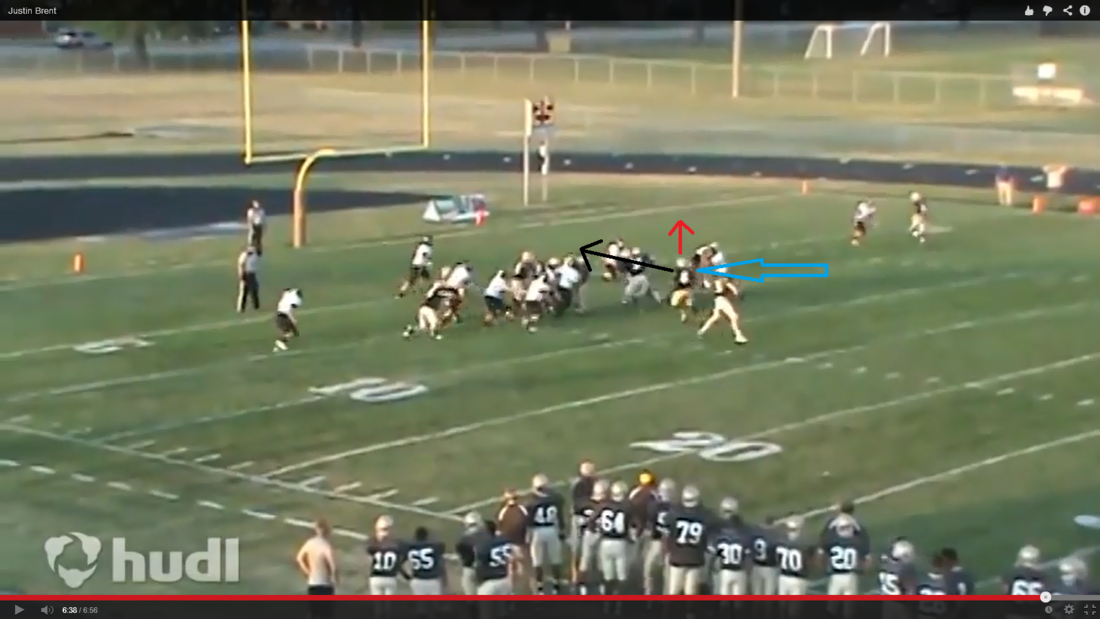 Brent has the ball. He has two choices here. He can follow the red arrow to the outside (what most fast high school players do) or he can follow the black arrow towards the goal line (what college football players have to learn to do). In all likelihood, either choice will result in a touchdown. But turning his pads up field is a better choice in terms of projecting to the next level. 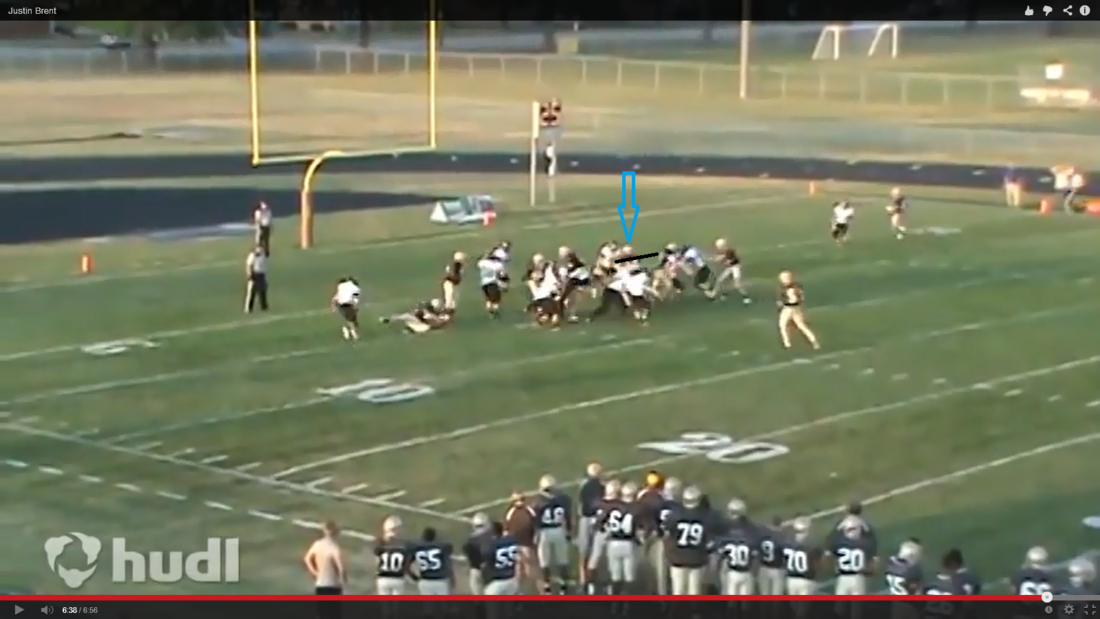 It's hard to see, but Justin Brent is directly below the blue arrow. What I like most about this run is that he turned his pads square to the goal line (the black line goes across his shoulders). This is how you run at the next level.

Justin Brent doesn't fit the profile that most fans envision when they think of the slot receiver position. He isn't a shifty, make you miss in a phone booth type of player. However he does possess a number of attributes that could be assets at the slot position. For example.

Keep an eye on Justin Brent this spring and in the coming years. Don't be surprised if at some point the coaching staff takes a look at him in the slot position. Maybe they've finally found their bigfoot.