Snowy conditions couldn't stop the Irish offense. Let's look at the OSU win and how the Irish attack is not only good at scoring, but defense as well.

Not even the snow could stop Matt Kavanagh.

The Irish Sophomore Attackman went off with a school-record-tying 7 goals as the #7 Fighting Irish pulled away from Ohio State in the 4th Quarter for a 13-7 win in a snow-delayed weekday contest in Columbus.

The game was delayed for 30 minutes due to snow, and when the game finally started, both teams were sloppy.  The teams combined for 10 turnovers in the first quarter alone and the Irish looked offensively inconsistent, failing to put one past Ohio State goalie Scott Spencer, who was starting and seeing his first action of the season.

The Irish were able to shake off the offensive rust behind a 5-goal 2nd quarter, led by Kavanagh, who scored Notre Dame's first three goals, all within five minutes of each other.

Kavanagh was basically unguardable for the duration of the game.  When he wasn't scoring goals, he was getting ground balls and assists, as he showed on a 3rd quarter score by Conor Doyle.

A breakaway 4th quarter was again aided by Kavanagh, as well as Middies Sergio Perkovic, Jack Near and one of the nation's best Faceoff Specialists in Liam O'Connor, who all netted scores in a frantic 6-goal 4th quarter.

Analysis: Notre Dame's Attack - It's All About the Ride

I wrote in my preview that if the Irish were able to get quick scores, the game could get ugly.  Obviously the Irish were a little slow out of the gate, but once the offense got going, they got streaky.

I have a theory.  Thin, but a theory nonetheless.  It's multi-faceted and relies on a few factors.  The first part involves Liam O'Connor.  The #2-ranked Faceoff Specialist must win a clear-amount of his faceoffs. O'Connor actually dropped to #2 in the nation's rankings behind Joseph Nardella of Rutgers, though O'Connor has played 2 less games and has a quicker win-ratio.  Nevertheless, when a team has a FOGO (ugh. Dirty word.) that can win 70% of his faceoffs, the offense is bound to net points.

The second facet involves conditioning.  Against Ohio State, it was obvious.  I noted in my preview that Ohio State Coach Nick Myers doesn't have a deep roster.  Against the Irish, he only played 20 players, including starters (Notre Dame played 27).  He started a brand-new transfer goalie.  He went with one FOGO, who got abused by O'Connor (I don't count D-man Dominic Imbardino's 2 faceoffs. Sign of desperation.)  This was a team that was gassed. The 1st quarter allowed both teams to start fresh.  Halftime gave Ohio State a chance to regroup and rest their legs.  It lasted a quarter. Notre Dame simply had more depth.  To justify my theory, as I said, the Irish will routinely play around 25-27 players.  In the Irish's wins, Jacksonville played 25, UNC played 25, Virginia played 24 and Ohio State played 20.

The third facet involves the attack.  In the Irish's losses to Denver and Penn State, Notre Dame's attack was neutralized by a sound defensive scheme.  Penn State and Denver both used a zone look to confuse the Irish.  No amount of O'Connor-won faceoffs was going to make a difference when the attack wasn't getting traction.

In the Irish's wins, the attack effectively moved the ball and moved the offense well enough off-ball that it put points on the board.  In addition, Notre Dame's attack might be one of the best riding units in the country.

What is "riding?" In lacrosse, riding is basically a combination of a forecheck in hockey and a full-court press in basketball.  When the defense or goalie gets the ball, it becomes the job of the attack to disrupt their "clear" attempt, either by forcing a bad pass, or by causing a turnover.

There are basically two ways to Ride. The first involves marking every player except the goalie, forcing him to carry the ball upfield.  Most (read: ALL) goalies wear minimal arm pads, making them hesitant to attack in the offensive end. The second is a zone, where the players will steer the clearing team into a box-trap that forces bad passes.

Let's take a look at one of ND's rides against Virginia: 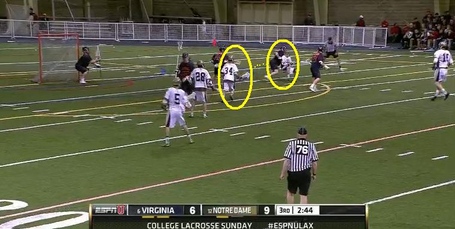 Matt Kavanagh, driving from X, tries to pass it to a briefly-open Trevor Brosco, the Irish crease Middie.  The pass is immediately disrupted by Brosco's defender, who checks his stick, putting the ball on the turf. 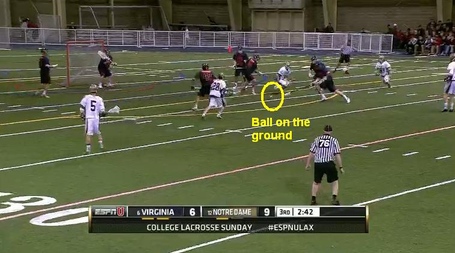 You can see the ball on the turf as a UVA LSM abandons his man up at the top of the box to pick up the ground ball. 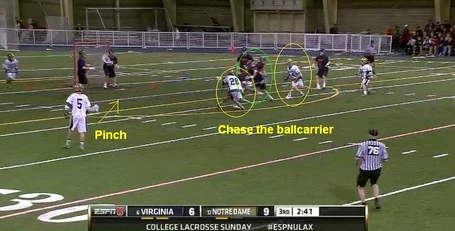 As quickly as the ball is on the ground, the Irish set up their ride.  The Virginia LSM's momentum is carrying him backfield and to the sideline, and the Irish offense responds accordingly.  Middie Jim Marlatt (#5) stays put at the bottom of the field to close off the LSM.  Meanwhile, Conor Doyle and Brosco give chase.  The key here is that the Irish are not over-pursuing the LSM.  They are allowing him to run himself into a corner.  Think...herding cattle basically. 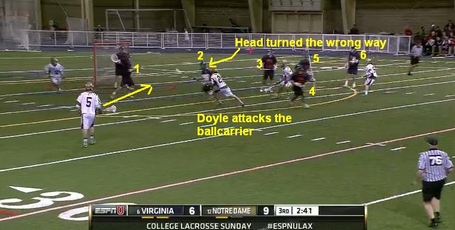 Great news for this picture: I can see all 6 UVA players on the screen! (Not counting the goalie of course).  Bad news for them: the UVA LSM is facing the wrong way and he is running the wrong way. He quite literally has no one to throw to.  Brosco sees this as his head is on a swivel and stops his pursuit.  Doyle continues to drive him to the sideline and into a contain of Marlatt and John Scioscia (behind the net). No Virginia player is even making an attempt to help.  They all breakout upfield.  I'm not sure why. 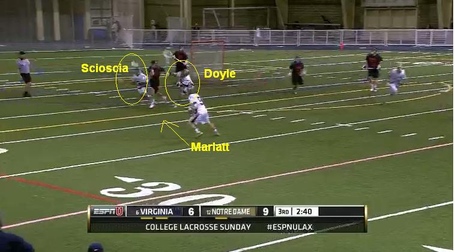 The ride succeeds. Doyle drives the UVA LSM right into Scioscia and Marlatt and at this point in the frame, Doyle has checked the bottom-hand of the LSM, knocking the ball loose. 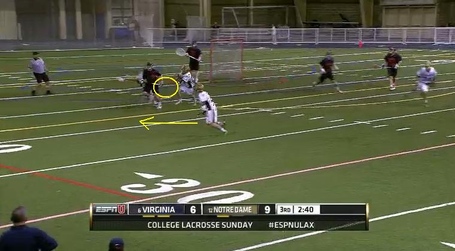 With the ball (circled in yellow), now knocked loose, the Irish have a man/ball situation.  Marlatt has zeroed in on the UVA LSM because if Doyle or Scioscia hit the LSM, it will be a Loose Ball Push.  So the two Irish attackmen pursue the ball instead. 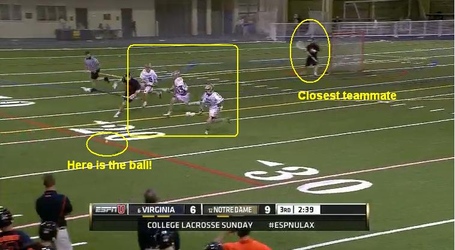 ...But it doesn't matter. The ball's momentum carries it out of bounds.  Worth noting though that there were three Irish offensive players in the picture while the closest UVA player to the poor LSM is his goalie, who is in no position to help on the play.

This is a textbook, unsettled-situation ride.  Even when you have chaos on the field, the Irish offense knew their assignments and drove the man to no-man's-land.  He had no adjacent help and no support.  On his own, he lost the ball because of an expert ride by the Irish offense.

Later in the season, if the film allows it, we will look at the Irish's settled-situation ride.  Until then, take note short-sticks.  If you lose the ball in the offensive end, it can be just as easy to get it back.  Working together, knowing assignments and taking advantage of the space allowed can easily turn that turnover into points.