Stuck in No Man's Land: Mixing Gap Responsibilities with the 4-3 Hybrid Defense

How mixing gapping responsibilities will allow Notre Dame to use the 4-3 defense in the future and fit their system to the players on the roster.

Share All sharing options for: Stuck in No Man's Land: Mixing Gap Responsibilities with the 4-3 Hybrid Defense

If you read our 2-part series on Notre Dame's multiple front defense (Part 1 HERE, Part 2 HERE) you might have thought to yourself, "Okay I get that they use both 30 and 40 fronts but don't each of those defenses require different personnel and player types to be effective?"

The answer to that question is really, yes and no.

Like many other defenses the Fighting Irish are forced to employ both fronts based on what their opponents throw at them plus having to work to the skill-sets of the players on the roster. Notre Dame no longer has the abundance of 290+ pound bodies to run a 30 front a vast majority of the time, nor do they have an abundance of sleek 250 pound edge rushers to up and switch to a 40 front.

In other words, it's never been more apparent than right now that the Irish are stuck in no-man's land on defense. The players on the roster have learned the 3-4 as their base defense and up until this past 2014 recruiting cycle the athletes have been signed primarily based on that system. Now, two of the most freakishly large prototypical 3-4 cogs in school history have moved on to the NFL while the new defensive coordinator has roots in the 4-3.

We already discussed how the Irish used a variety of fronts last year and today we're going to look a little deeper at the 4-3 Over and 4-3 Under fronts to get a better idea of what the future may look like in South Bend. We will do this in order to show the differences between the fronts but also to show the similarities when you mix hybrid gap responsibilities. 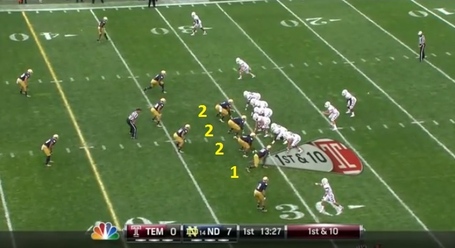 Here's the 30 front screenshot from Part 1 of the multiple defense post with the gap responsibilities numbered for the front line players. A 2-gap player means they are responsible for both gaps on either side of the player they are lined up across from. They are expected to 'eat blocks' and if they are not double teamed they are expected to control a lineman and make a play on the ball carrier if he passes through either of his gaps.

A 1-gap player is responsible for just one gap and often lines up directly in that gap. Typically a 1-gap player does not eat blocks and is more concerned with penetrating through his gap to attack the quarterback or ball carrier.

The problem with relying on a 2-gap 30 front as your base defense is that you need at least 6 linemen (starting lineup plus backups) who are big enough and strong enough to hold the point of attack. Being able to find that many large bodies who can be effective is a struggle for most NFL teams, never mind college programs who have to deal with younger players, development windows of 5 years max, transfers, and players getting out of their National Letter of Intent.

Enter the hybrid 4-3 defense that mixes 1-gap and 2-gap responsibilities with different players in the same front.

(h/t to fieldgulls.com for the graphic)

This is the 4-3 Under defense which is very similar to a traditional 3-4 defense when there are mixed gap responsibilities and looks a lot like a 5-2 alignment. The traditional 4-3 Under was developed by Monte Kiffin when he was DC at Nebraska in the early 1970's (he'd later mix in his more infamous "Tampa-2" with this front) and later at Arkansas under Lou Holtz. When Kiffin worked at Arkansas there was a young grad assistant on the staff named Pete Carroll. Carroll used that knowledge of the 4-3 Under extensively culminating in his dynasty at USC and current reign with the Seattle Seahawks.

This has been the Seahawks base defense as they just lead the NFL in fewest yards and points allowed on the way to their first Super Bowl victory.

Let's talk about the personnel with this alignment to discuss some strengths and weaknesses in terms of fit for Notre Dame:

Without Tuitt I would classify this position as a weakness although we did get long stretches of very average play out of the departing Georgian last year. Williams has the length you'd like to see on the strong-side of this alignment but at 271 pounds it can be dangerous to let him 2-gap here. Then again, if Ishaq is going to be a defensive end in the 30 fronts he'll have to get used to this level of physicality anyway--plus he has the Sam linebacker to offer help outside the tight end.

If Springmann can get healthy he could team up with Jones to offer a very solid combo at nose tackle. Like your 5-tech DE this position is pretty much the same as the 3-4 defense. Either way, the Irish need to find a couple effective 2-gapping nose tackles this fall. It appears that Jacob Matuska (6-4, 285) is getting some looks here in the spring as well. He's a touch on the small side but nonetheless a body-type you might have to make work.

There isn't a player on the roster more perfect for this position than Sheldon Day. The 4-3 Under is designed to get this tackle into one-on-one situations and Day has the perfect skill-set for that role. This is the position that made Warren Sapp a Hall-of-Famer for the Buccaneers. You can see the point of this front is to 2-gap to the strong side and unleash disruptive players who 1-gap on the weak side to the blind side of the quarterback. This tackle needs to be super quick off the line which is Day's biggest strength.

This position is popularly known as the "Leo" thanks to Peter Carroll. This is an interesting position for the Irish to fill in 2014 with so much more emphasis on attacking the quarterback. It should be the team's best pass rusher, someone who is hyper athletic with size not mattering too much as the other linemen. Okwara fits from a size prospective but I'm not sure he's a talented enough pass-rusher to hold off other players on the roster. For the incoming 2014 class both Andrew Trumbetti and Jhonny Williams are the players I envision as long-term solutions at this position.

Grace is a natural fit here. Still too big for the college game in my opinion but he brings smarts, leadership, and good sideline to sideline tackling ability. Whether he's a realistic option due to his health is another question. I don't think it will be long before this is Nyles Morgan's position but we may see Joe Schmidt here a whole lot in 2014.

I put Councell here more for demonstrative purposes. He has the perfect size (253 pounds) to help contain the run next to the small-ish Ishaq while also having the speed to run with the tight end in coverage. Jaylon Smith plays here a lot even though he's a little under-sized he has the length and athleticism to make it work.

This spot should be for the fastest linebacker on the team and the athlete who will pick up the most tackles. Jaylon meets those requirement hands down. This linebacker is protected by the scheme more than the others and has the freedom to roam to the ball whereas the Mike and especially the Sam take on more blocks.

The Under front looks a lot like a 5-2 with the linebackers rotating to the strong-side and is especially built to stop the run, whereas the Over front is a little more balanced in terms of defending both the run and pass. Think Seattle Seahawks for the Under and Michigan State for the Over. This is the base defense for the Spartans under Pat Narduzzi.

The main pressure point with the Over front is with the 5-tech defensive end working over the tight end. If he's doubled that should free up space for the 3-tech on the interior. If the 5-tech isn't doubled, or even goes one-on-one with the tight end, that's a matchup the defense will take all the time.

A glaring weakness with this Over front is a running play to the weak-side of the formation. Look at how susceptible Romeo Okwara (258 pounds) is to being walled off by the left tackle. That would open up a huge hole on the left-side. It doesn't help matters that 230 pound Jaylon Smith is over there either.

One solution to this dilemma is to flip-flop your Sam and Will linebackers which some teams will do. Some teams don't even bother with the Sam & Will designations and instead play a LOLB and ROLB based on specific opponents and specific plays.

Yet another change to this front would be to move your 5-tech defensive end to the weak-side and flip the weak-side defensive end "Leo" to the strong-side. Or if you're really concerned about stopping the run you can substitute a 280+ pound player at the weak-side "Leo" position (and move him in to a 5-tech) which is something the Seahawks have tinkered with in the past.

You can make all sorts of changes--even ditching the 2-gapping if you really want to play aggressive--and present a lot of different looks out of these Over/Under sets.

This hybrid defense is not new to Notre Dame--in fact they've used it last year--and we don't know how much more of an emphasis these looks might have in the future. We'll have to wait until the fall to see what BVG has in store.

I think what is confusing for people is that there isn't much of a base defense anymore and these hybrid schemes blur lines of player responsibilities and even titles. For example, Jaylon Smith could play any number of positions in the 4-3 Under/Over fronts. I personally think his skill-set fits Will the best, Larz would put him at Mike, and Notre Dame has him often playing at Sam which is where he worked last year in most of these sets.

Even then it's not as cut and dry for a player like Jaylon Smith. As this spring is showing Smith is being trained at various positions to take advantage of his incredible abilities.

This hybrid defense offers a lot of flexibility for the players, especially in an era of increasing specialization so we should get used to seeing more of it in the future. Up next, we'll look at Notre Dame's use of nickel coverage as the Irish move on without several front 7 starters and the possibility of a strong secondary in 2014.