Yessssssss 5WF is back!

1. Who is the most underrated coach in North American sports?

Can I say Billy Donovan?

I guess that could be a weird answer now that the Florida Gators are the No. 1 overall seed in the NCAA Tournament and it's possible that I'm way off on this but does Donovan get enough credit down in Gainesville? He got off to a slow start but he's put together 16 straight seasons of at least 20 wins. Also, he has 9 seasons of 25+ wins at Florida as well.

Sure the SEC really isn't a super tough league. Still, Donovan now has 8 appearances in the Sweet Sixteen. If he beats UCLA on Thursday that's four straight Elite 8 appearances. Oh, and they'll await the winner of Dayton-Stanford if they beat the Bruins so a Final Four appearance seems likely.

A much tougher goal is winning the whole Tournament and if Donovan does that'll be his third title. Only Coach K, Adolph Rupp, and John Wooden would have more. That's legend territory. Do people talk about Donovan that way? Will they if he gets title No. 3?

2. You are in the process of analyzing the rosters of Notre Dame's opponents for post-spring previews. Can you rank the games by difficulty with what you've seen so far?

1. Florida State- It's going to be a tough one.

2. Stanford- A step back on defense but perhaps a step forward on offense.

3. Michigan- They'll be improved by quite a bit.

4. USC- Lots of pieces coming back, enthusiasm with a new coach, etc.

5. North Carolina- Lost a few key players but lots of talent coming back, especially on defense.

6. Louisville- Even without Bridgewater there's enough to work with on offense.

8. Northwestern- They'll have a much better record than last year.

9. Syracuse- They could be a darkhorse quality ACC team.

10. Navy- I haven't done any research on them yet, but they fall here anyway.

11. Purdue- Things will be better than last year, I think?

12. Rice- Losing some key players on offense that relied on a strong offense on the way to 10 wins last year. Probably a significant step back this fall.

3. Should they stay or should they go: NBA sleeved jerseys?

These things have to be banned following this season. 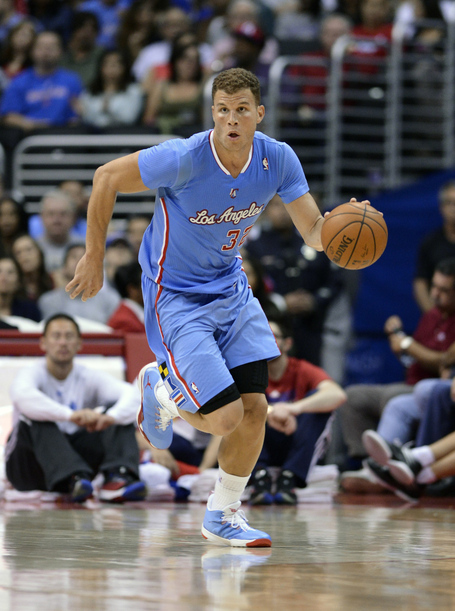 There have been a ton of complaints from the players so much so that NBA Commissioner Adam Silver is going to sit down with LeBron James (and others I guess?) after the season to talk about banning them in the future.

4. We're about 7 weeks away from a decision regarding the playing surface situation inside Notre Dame Stadium. Will the University finally pull the trigger for an artificial surface?

A few months ago I really thought this would be the time to make a change. The whole Crossroads Project being announced seemed to signal that change in and around the stadium was welcome. Still, I think they'll give it one more try on the natural playing surface.

I think it's a mistake. I think it's inevitable that an artificial surface gets put in at some point. No matter how deep they dig this off-season there's just too much evidence that maintaining a beautiful natural surface is a fool's errand in South Bend.

Maybe it looks great for a few games. Perhaps a year or two. Eventually, one rainy game in October will destroy the field and we're back to all the same old problems. I'm being kind with this too. With a brutal winter, frozen ground, and a short time frame I'll be surprised if the field looks great by the home opener.

Hey, I hope the $5 million or whatever it's going to cost is worth it.

5. It should be a nice NFL Draft for Notre Dame this spring, but what about next year? Who do you see getting picked and where for 2015?

It'll be a humble crop for Notre Dame in 2015. I don't think any of the 5th year guys have a chance except maybe Cody Riggs if he has a strong season. Out of the senior class there is a small group of legit prospects: DaVaris Daniels, Ben Koyack, Ishaq Williams, and Kyle Brindza. I think it's unlikely any of them go in the first 3 rounds.

KeiVarae Russell is getting some hype as an early entry but I'm not sold that his stock is going to soar to incredible heights after 2014. I think we're underestimating how high of a level a corner needs to play at in order to get a high draft pick.

I'd think about Sheldon Day too. He's in line for a big year but also likely to come back for his senior season.

I'm not even discussing Golson walking away from a fifth-year of eligibility.

We were surprised by a couple of players leaving this past year and that could happen again. Still, I'd bet a decent amount of money that there aren't any Irish players in the top 2 rounds for 2015 no matter who leaves eligibility on the table.