Do the Numbers Add Up: A Statistical Look at ND Hoops Discussions

Metrics, metrics, metrics. You can't improve what you can't measure, right? Let's break down some of the efficiency statistics on both ends of the floor and put this Notre Dame basketball season in perspective.

Share All sharing options for: Do the Numbers Add Up: A Statistical Look at ND Hoops Discussions

When you go 15-17 overall, 6-12 in your league, and watch the postseason from your offices in South Bend, there's bound to be a lot of fan frustration to be vented around the Notre Dame men's basketball program. You see it in various discussions around various web circles. That's why I love stats. You can't measure heart, but you can see the difference between a trend and a bump in the road.

We did a statistical look at Notre Dame basketball back in February. Now that the season has mercifully ended, let's take a quantitative look at the first ACC season for the Fighting Irish and how it might impact some of the discussion swirling around the program and this disappointing season.

"The Season Was Over When We Lost Grant"

This, for sure is a popular, and very accurate sentiment. As Alstein pointed out in his great turning point article, that fateful weekend in NYC was the pivotal moment of the season. Certainly, this argument passes the eyeball test as you could see Grant's scoring ability helping break some of the maddening 3-9 minute scoring droughts the Irish suffered throughout the season. 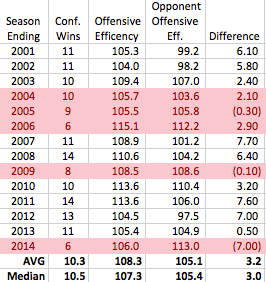 (these are conference games only, and red years indicate no NCAA tournament bid)

However, if you look at the 2 full conference seasons Grant played in the Big East prior to this year, the Irish were no less efficient on the offensive end. Notre Dame scored 1.060 points per possession (ppp) in ACC play. In the previous two BigEast seasons, Notre Dame scored 1.045 and 1.054. Had that trend continued, you could have expected this year to fall right around 1.063. Even then, it would have been below the 1.083 average of the Brey era.

Grant's 12.7% turnover rate before going out for the season would have been an improvement on the team's overall 16.2% in ACC play, and he was shooting 58.9% eFG in the non conference season. Had he been able to keep that impressive pace, it would have improved on the team's 50.2% eFG in conference play.

It is easy to make the case that Grant improves the Irish offense to at least average levels during the Brey era. Sadly, that wasn't the real issue with this team. This season was derailed by terrible defense. Even if Grant was able to add the 0.023 ppp needed to get this offense to "average" efficiency, he would have had to improve the defense by a whopping 0.052 ppp to give the Irish team a profile that historically found itself at double digit conference wins and an NCAA bid (more on that later).

What kept this team out of the tournament wasn't their offense, it was clearly the defense. If you want validation that defense is correlated with success, of the top 14 teams in defensive efficiency (non-adjusted), only LA Tech, which finished tied with Tulsa atop the C-USA regular season, and Southern University (SWAC regular season champ) aren't dancing. Using Ken Pomeroy's numbers, the best 16 defensive teams in the country are in, with the notable exception of SMU.

So if defense is so important, and this year's Irish were so bad, it must be a flaw in the way they are coached. Mike Brey teams have averaged 1.05 points per possession during conference play in his time at ND. This team was truly dreadful at 1.13 ppp in ACC play.

For perspective, the Irish had given up 0.975 and 1.049 ppp in their last two BigEast seasons. Had this team given up an "average" Mike Brey 1.051 ppp in conference play this season, it would have landed Notre Dame as the 160th ranked defense and right with or slightly above above NCAA tournament participants Dayton, Oregon, BYU, Oklahoma and even 2-seed Wisconsin and 3-seed Iowa State.

Instead, ACC teams scored an average of 1.13 points per possession (ppp) vs. the Irish this season. That placed them tied for 326 among the 350 teams in statsheet.com's data. In Ken Pomeroy's adjusted (full season, not just conf.) ratings, the story is just as bad. This year's Notre Dame defense came in at 199th (which has improved since the tourney started) in the country, well below the next highest at large bid, Iowa, who now sits with the 132nd ranked defense according to Pomeroy after their loss to Tennessee in a play-in game.

So we've been hammering that defense is important and looking at the first table, you can certainly say this team is well worse than the previous average. There's hope that this is an outlier. I don't think you can make a statistical argument that Brey isn't capable of coaching a "good enough" defensive team to get into the tournament, but the fact this year's team was so far off out of character and a dramatic shift leads to a whole other discussion...

When I first encountered this idea, my inclination was to look at the "difficulty" between the two leagues. As was discussed in a previous thread, using ESPN's Basketball Power Index (BPI) to compare the ND schedule in their last Big East season vs. their first ACC season, the two are a statistical dead heat. The overall "strength" argument could be bolstered when Louisville replaces Maryland next year, but the argument that previous ND teams made their name feasting on a weaker bottom end of the Big East vs. what they see in the ACC certainly has some statistical holes in it. 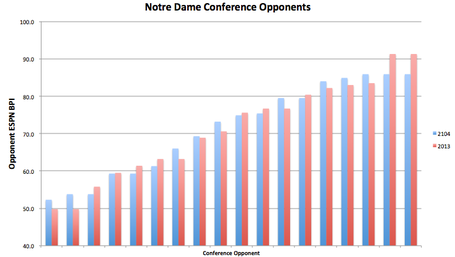 (those 2 long red bars on the far right is Louisville, and as you know, they're back with us)

Interestingly, NDZibby's comments tapped into a stylistic nerve. Perhaps it isn't the ratings of the opponents, perhaps style of play could explain the dramatic drop off in defensive efficiency and overall success.

On the offensive end of the floor, the ACC transition isn't very obvious. Notre Dame's offensive efficiency was slightly below average for the Brey era at 1.060 ppp vs. the 1.083 average. This year's team was a slightly more efficient on offense than either 2012 or 2013, where they managed to win a total of 24 conference games in those 2 seasons. It is difficult to say the league switch impacted the Irish offense. They turned it over less frequently than in previous years, and the opponent steal percentage was on par. Shooting wasn't dramatically up or down either, when measured by eFG%.

What killed the Irish in 2014 was the dramatic gap between their offensive efficiency and defensive efficiency. Previous to this season, there were only 2 other Irish teams that had a negative "gap" in offensive vs. defensive efficiency in the Brey era (see first table). In 2005, they had 9 league wins, no bid, and scored 0.003 fewer points per possession than their opponents. In 2009, the team with 8 Big East wins and no bid scored 0.001 fewer points per possession. This 2014 game gave up a whopping 0.070 more points possession than it scored. That's an order of magnitude worse than any other Mike Brey Notre Dame team. In a 60 possession game, that's 4.2 points behind their opponents.

That dramatic gap was driven by a porous defense. As we noted above, the 1.130 ppp on defense was the worst in the Brey era and 0.1 behind teams in the last 3-4 years in the Big East. I'd be remiss to discount the contributions of guys who graduated in 2013, but let's assume the Irish trucked out roughly equivalent guys in a roughly similar scheme, the difference is opponent shooting.

Notre Dame gave up an 52.3 opponent eFG% this year. This was the first Mike Brey team to go over 50.5 in that category and only the 3rd to go over 50 (50.1 in 2003 and 50.5 on that 2006 team). Part of that is the transition to the new league. The ACC in 2014 had 6 teams shoot over 50.0 eFG (and Wake at 49.9). The BigEast in 2013 had only 2 teams shoot over 50.0 eFG. The median shooting in the ACC this year was 49.4% eFG vs. 47.8% last year in the BigEast. That may not seem like a big difference, but when we step back out to efficiency numbers (points per 100 possessions), the ACC is much more challenging to defend. Duke, Virginia, Pitt, BC, Syracuse, and UNC all had efficiency numbers in 2014 greater than the highest BigEast team in 2013. The median in the ACC is 3.5 points per 100 higher than it was in the BigEast. The average is a full 4.4 points per 100 possessions higher in the ACC. Notre Dame played poor defense and they played it in a league that is ruthlessly more efficient than they faced in the past. Outside of VT, almost every ACC team was near 1 point per possession. Duke is currently the 2nd most efficient offense in the country, according to Ken Pomeroy's ratings. Facing these better offenses wasn't a huge problem for Virginia, rated 4th in adjusted defensive efficiency, while the Irish were 204th of the 351 teams in Pomeroy's rankings.

The better shooting in the ACC is evident in the historic look at ND's opponent 3 point FG%. The Irish gave up 39.3% from behind the arc in 2014. This was the 2nd worst in the Brey era, behind only the 40.6% all the way back in 2003. Notre Dame had held teams to below 35% from the arc regularly (10 times under Brey) in Big East play, but the Irish reliance on the 2-3 this year exposed their inability to recover to shooters, and better shooting ACC teams took advantage. Frequently, in the Big East, defense consisted of collapsing around physical post men or containing dribble drives. In the ACC, poor help and slow rotations are more exposed as teams roll out better shooters and are more proficient from the perimeter.

Style of play will be a major factor as the Irish begin to write their story in the ACC. They need to find a way to solve for these better shooting teams in order to plug up in incredibly leaky defense. To underscore this, the worst defensive team (according to Pomeroy) to survive the first round of the NCAA tournament was Creighton. Their 102.7 adjusted efficiency number is a significant improvement on ND's 106.1 adjusted number, but they run an astonishingly efficient offense at 124.6 adjusted (tops in Pomeroy's ratings). Unadjusted, Creighton scores 1.213 ppp, much better than any Brey-coached ND team. If the Irish are going to return to relevance, they need to find a way to stay efficient on the offensive end and defend the ACC style of play down around 1.05 ppp.

What do you say OFD commentariat? Do the numbers lie? Were there other points of contention out there you'd like to see researched and quantified?